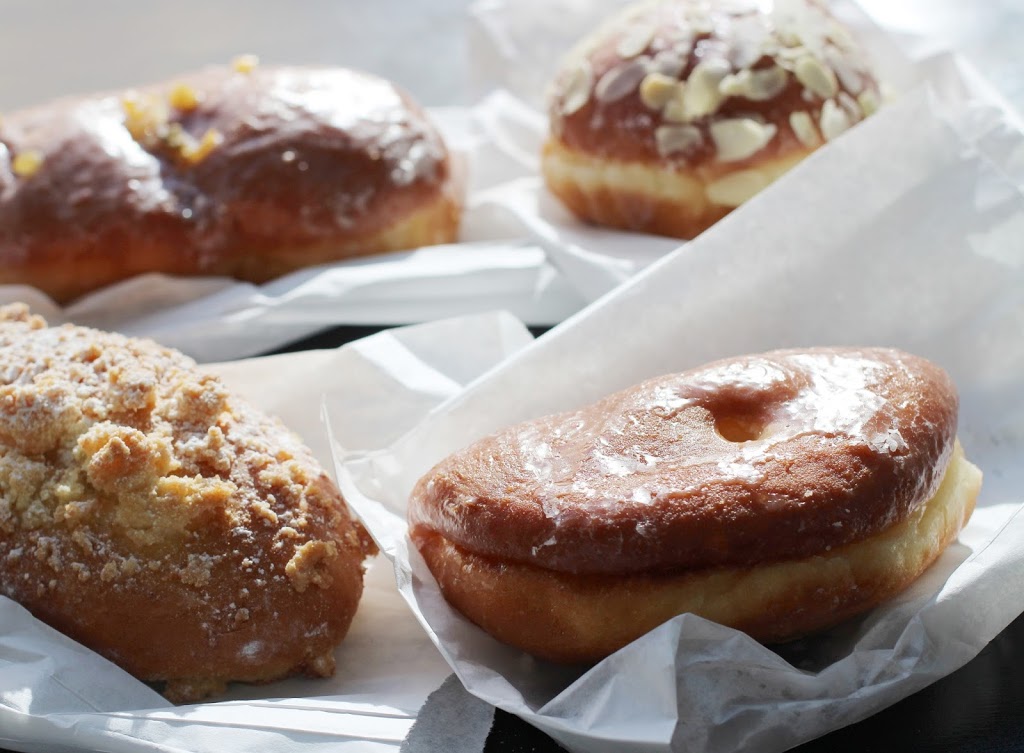 I guess anyone who knows me won’t be too surprised to see that one of my first Polish posts is about Pączki.

These delicious, sweet, perfectly-fried-fluffed-and-filled delicacies, pronounced more like ‘pOnchki’ than ‘pac-see’, are Poland’s version of a jam-filled doughnut (or Berliner).

But let me tell you friends, the word doughnut just doesn’t cover it. 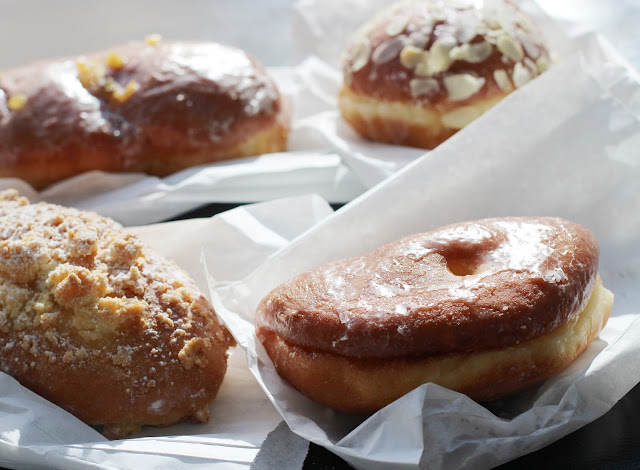 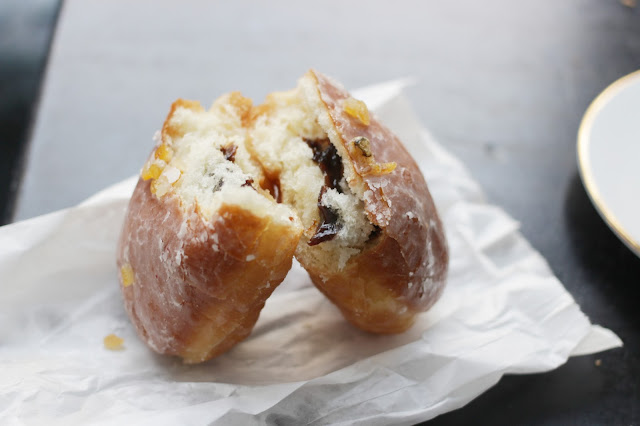 When we arrived in Warsaw, one of the first questions I asked the magical Google machine was ‘where can I get the best Paczki in the city’.

As luck would have it, it turned out that my beloved had chosen a hostel directly between two of the most famed bakeries in town. I’m sad to say that we never made it to A Blikle– I guess now I have another reason to return to the Capital, but we did manage to feast on some of the exceptional product from Cukiernia Pawłowicz. 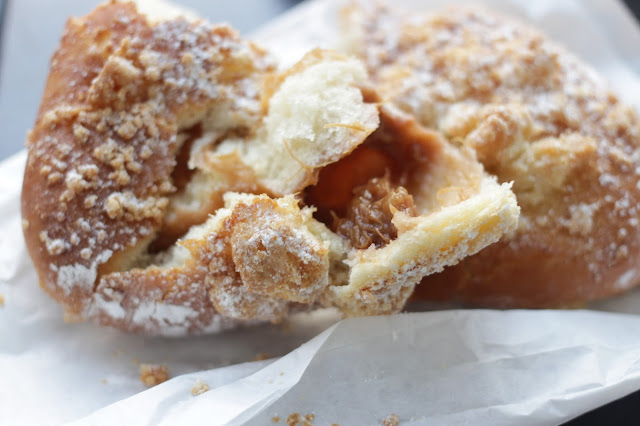 Cukiernia Pawłowicz is a hole-in-the-wall bakery on the Chmielna pedestrian wall. We went by in the morning, and there was no queue, just a very friendly lady who helped translate some of the 20 or so different flavour offerings into English. Oh yeah, and a slightly scruffy gentleman, who was being served tea, and convinced us to buy the Rhubarb flavour (featured above).

Thanks for nothing man! Definitely one of the least tasty of all the consumed Paczki. 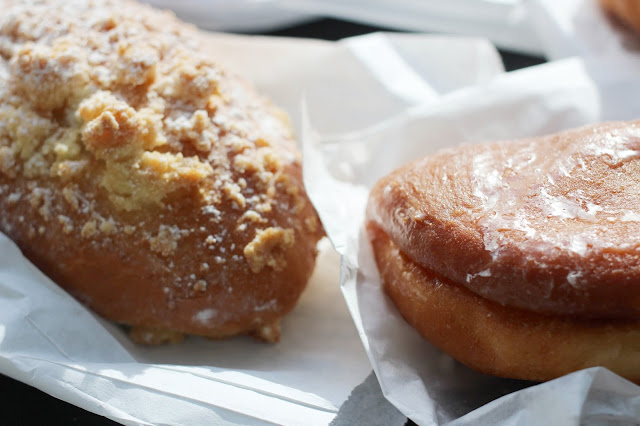 Paczki dough is not at all sweet, but instead has a fairly distinctive ‘yeasty’ flavour. Often in addition to the filling flavour, the little dough balls are garnished with some sort of candied fruit peel, or, in the case of this fine and fluffy fellow below, flavoured throughout with orange. 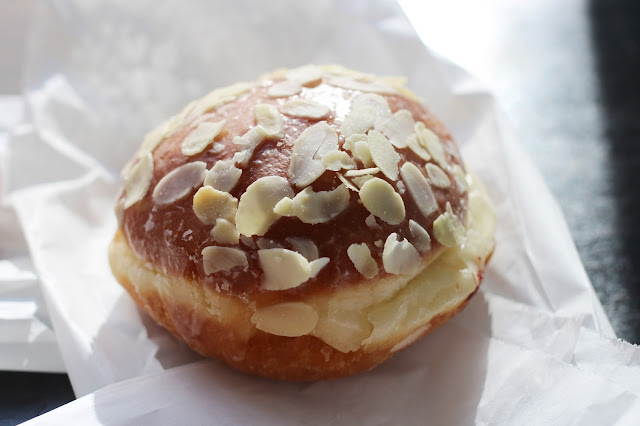 Add a slightly tart traditional rose jam to the centre of a perfectly risen dough and produce a completely crispy outer shell with some sort of synergistic marriage of light frying and glaze… and then sprinkle on yet another layer of texture, complexity and rich almondy flavourings… and you have a beautiful beast.

Fun fact, apparently the addition of a bit of alcohol to the dough prevents absorption of too much oil!

Oh yeah, and did I mentioned that all the doughnuts were somehow, magically, always warm?

Did you want to see the inside? 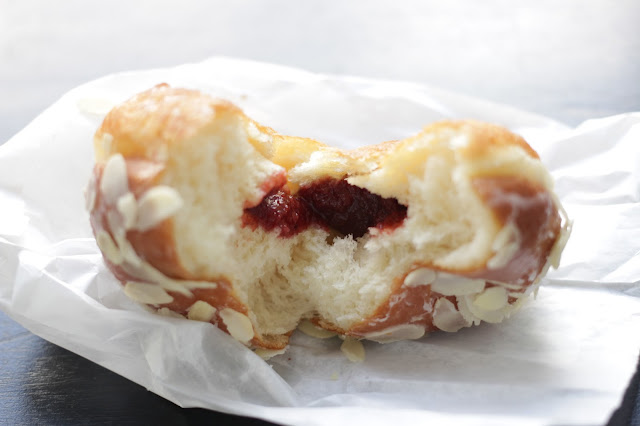 I have to be honest.

The rose was nothing  when compared to the plum.

Which contained a more plentiful, and tarter, inside. 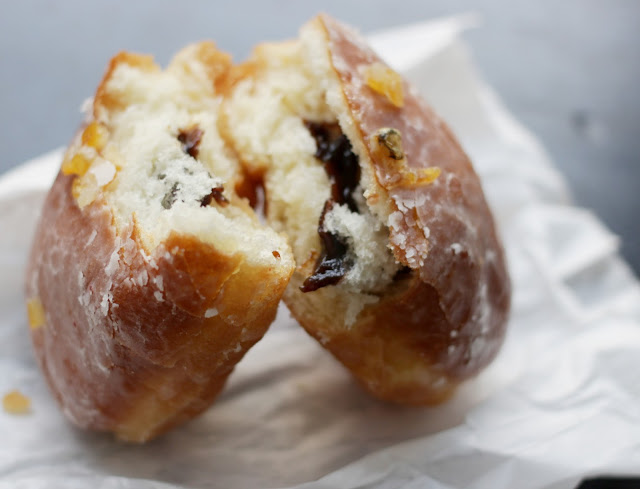 And the surprise player?

To be honest, when she said the word ‘halva’, I thought she was mistranslated. 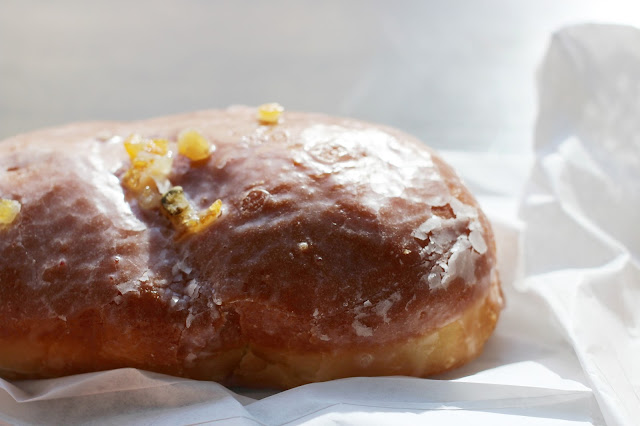 The problem with chocolate or nutella doughnuts, is that they can be waaaay too sweet. 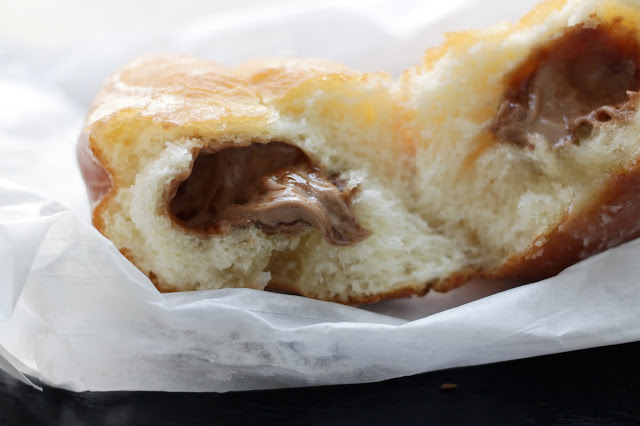 At 3 to 3.2 Polish zloty, they come in at just about 80 cents for anyone earning in euros.

Unsurprisingly, I went back for more, although none of the new flavours where as good as the first time. In fairness, I picked them without any translation help: and thus ended up as ‘egg nog’, ‘cheesecake’ and ‘cherry cheesecake’.

Thankfully, I was smart enough to go straight for the halva again! 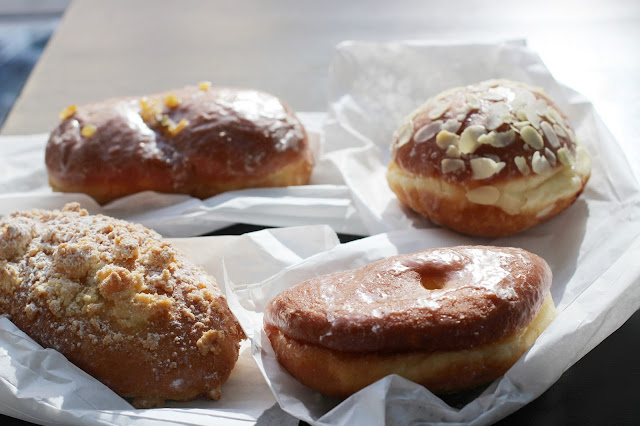 Don’t forget to visit Cukiernia Pawłowicz the next time you’re in Warsaw!