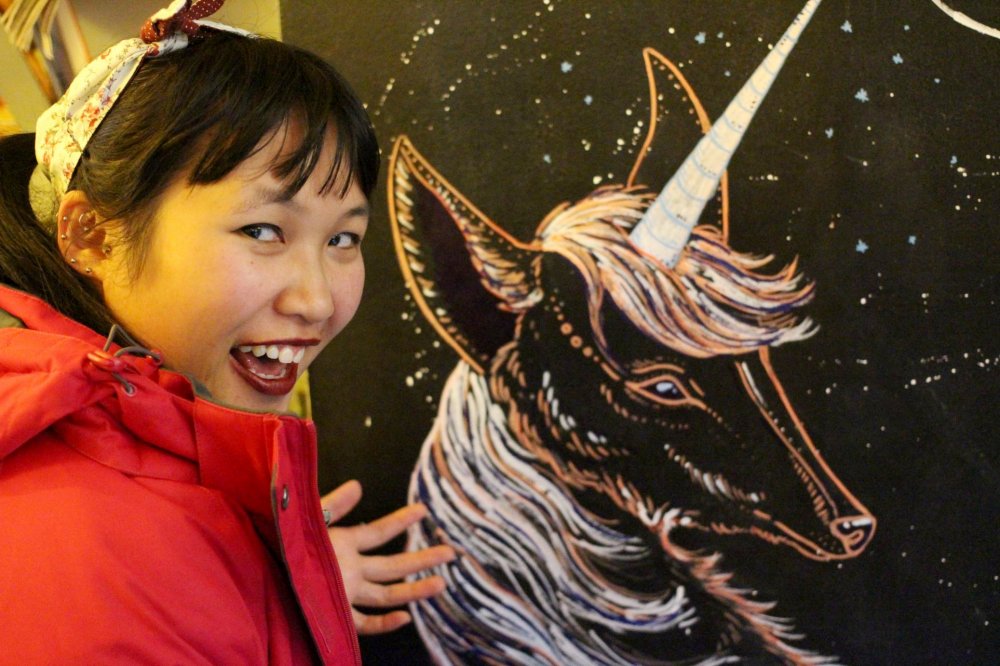 I actually can’t work out which is more glamorous. The lady or the unicorn.

Sorry guys, I didn’t get ’round to putting a post up last weekend… I seem to have managed to get the sniffles yet again, which is particularly ridiculous given how mild the winter is. I seriously thought that concentrating on eating lots of spinach and veggies, and actually doing some exercise, would help out my rather pathetic immune system, but it seems to be still set to ‘immunocompromised baby carrot’ mode (or, whatever the most ridiculous defense that a grown woman’s immune system can actually have).

If anyone has any idea how I should pick up this thing (apart from quitting my job, which is admittedly a total germ factory- all the kids at out local kindy now have scarlet fever! and foot and mouth disease! both of which sound like they should only be a thing that nests in the body of one of Anne of Green Gabels’ babysitting charges), please hit me up. But, like, scientifically grounded suggestions. Not ‘maybe you should wear more clothes’.

So, a couple of weeks back now, we were visited by an Australian… Yeah, not this one.. but this one: Kim (a co-conservation biologist), intended to drop by Berlin last year sometime, but Andy and I threw a spanner in the works by leaving town. This time, we managed to stay put.

I’m completely pro the shameless using of guests as a method for seeing new aspects of the city you live in.

Kim is vegetarian (at a bit of an expert at making vegan sweets), so…. given that I’m keen on thinking of non-meaty ways to make meals, given that Berlin seems to be some sort of paradise for anyone with any kind of different dietary requirement, and given that in the past, Andy has always often anti-chosen a veggie option in the preference that our forays into the city involve some sort of bloody sacrifice … I was pretty happy to follow Kim’s list of recommended eats and celebrate veggie-ism for a couple of days. The first stop was Voener (vegan doener). A perfect way to get some real Berlin food, and a real Berlin experience, into a non-pork-eating friend (traditional German food can be kind of pork heavy).

The pros here, are that it really was very  similar to a Doener, including not only the spiced and flavoursome elephant-foot ‘meat’, but the general face-stuffing experience. Plus, the tahini sauce was killer!

The con is this: I’m not sure that I want my vegan/veggie meals to imitate meat. I think I would have been even happier with some roasted carrot, capsicum or potato, in place of the ‘veat’ (vegan meat? I don’t know the jargon here).

Oh, and if you visit, you should probably take the special fries. I’m not sure what they put into that Veese (vegan cheese- I’m trying here guys, really), but it was fabulous.

But we couldn’t really manage a voener each and the fries, so unless you’ve got amazing eating skills…. plan to share. Ok, before you judge us too much, I want you to know that we waited until the next day to hit up Goodies. Goodies is kind of a kiosk/cafe. They’ve got cakes, smoothies, hot drinks and all your standard vegany blissbally needs. But they also sell ready-to-go wraps, bagels, salads and so on.

Kim, who had spend the morning on a three hour walking tour, went in for the Mac and Veese, and a wrap.

I had a hot matcha, and the most amazingly rich and decadent chocolate-fudge-brownie-cheesecake (veesecake) that has ever existed on the planet. Our next stop was the also-recommended Oh La La, which incidentally, is not just a vegetarian and vegan cake shop, but also the name of a popular (?) app for paid dating. Men need not apply.

Even though we managed to lengthen the walk by getting lost several times (yes, we both had GPS, yes, we both failed at reading the map), we still knew that we couldn’t fit in more food. Luckily, Oh La La is quite willing to wrap your cake up for you.

One Lemon and blueberry cake (even better than the chocolate cheesecake- slightly tart and bitter and sweet and moist all at the same time).

One Hazelnut and Caramel Tresor. Seriously though! Check out that caramel oooze.

Kim was heading out on a round-Europe tour the next day, so we sadly couldn’t follow up with a third day of face-stuffing.

Thanks so much for the visit and catch-up Kim!

For the rest of you out there, I hope the cakes serve as some extra incentive to get yourselves over to Berlin! We have a guest room waiting.