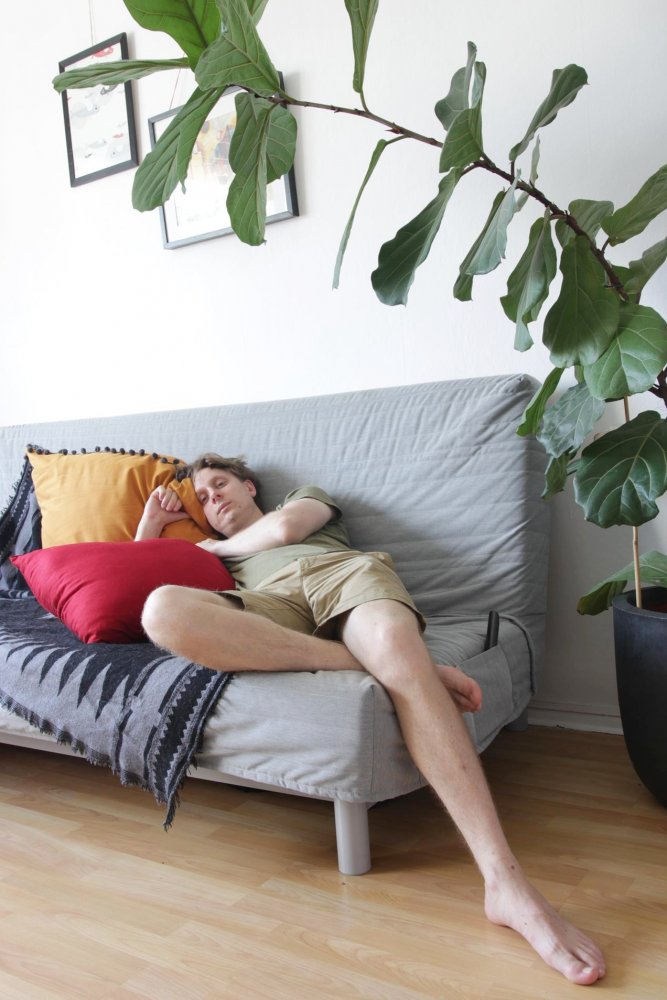 I counted the number of plants we have.

Because I think if you want to calculate your wealth it probably comes down to one thing. Happiness.

And if you want to calculate happiness it probably looks something like this.

I’m pretty sure that’s the formula. Of all the plants in all the rooms, my favourite is this darling. He’s a Geigenfeige or Fiddle leaf fig. My mother thinks I should turn him away from the light so he reaches back for it, straightening himself. But I love the curve. And I don’t want him to miss this brief fling with the sunlight.

He’s must have some sort of magic, because he’s Andy’s favourite too. Despite the slight mistrust of a tree that is now somewhat taller than the man.

In the end, I took Andy’s approval as a sign to rather rapidly buy another Fiddle leaf. Did you even know you can buy plants from amazon? Geigy-junior is only 1m tall right now, but it too is reaching for the light and the ceiling.

I do not think it yet suspects that I plan to cut its head to encourage branching. In terms of projected growth, trooper number 2 is this fellow in the white pot. A Gummibaum or rubber tree. When I bought it last year, it was just a wee thing, three leaves tall. I have threatened it with drought if it does not make it past 1 m by the end of the sunny season.

It seems to thrive under such pressure.

My golden pothos (I think that’s what it is), hanging in the red pot, has reluctantly developed from a cutting I stole from work. In theory, it should grow and grow and grow: its other common name is devil’s ivy.

In reality, I forget to water it. Often.

The mustard yellow of the dying leaves matches the colours in the room.

The succulents by its side I assume I can ignore until they wilt and drop their little cushion leaves and thereby signal me that they need some water. Andy is highly suspicious of all plants hanging by thread or on high shelves. They tend to shift their weight as they grow, and catapult themselves gracelessly to the floor. I have agreed not to hang anything where it can fall on his head. But now we have a vacuum cleaner, so I figure that spilled dirt is a solvable problem. Did I mention the number thirty three? That’s for the living room, not the flat. I know most people lean towards simple lines and clean design. I lean towards clutter and chaos and movement and plants.

This spreading philodendron (I think of the xanadu variety) pleases me greatly. On the other hand, the ficus in the corner, peaking over the Poang chair, is the bane of my existence. I have two of them, and one or the other always seems to be dropping leaves. They’re currently in a kind of pot with tray setup, which doesn’t really suit my ‘forget for two weeks and then over-water’ system.  They make a mess with dead leaves. I make a mess with water all over the floor. They perk up again. I forget about them. Apart from plants, we’re currently collecting mobiles. I may have mentioned that Calder, the inventor of the mobile, is my favourite of all the artists whoever existed. To the point where I refuse to research him any more because it nearly always turns out that the Great Man was just a mysogynistic bigoted bastard whose wife did all the leg work.

I shall keep my head in the sand and my heat filled with Calder.

The first mobile was a gift from Andy’s parent. Turning Leaves in black and red, above the chair, began an obsession with the Flensted Mobiles company. The little Neils Bohr Mobile (above with the baby Fiddle Leaf) shows Bohr’s proposed structure of an atom.

Andy thinks that it is rather a solar system. He also thinks that the two electrons that he identifies as ‘earth’ and ‘earth two’ will collide.

Finally, I used birthday money from my Aunt Joan to add  Life and Thread. The leaves can be replaced for a mix of red-black-blue-yellow-grey-pale grey-white.

The red-blue-yellow is the perfect combination of Calder and Mondrian.

Or they can dance in monochrome with just a hint of red.