I’ve been ‘visited’ by a nasty cold which has seen me miss the majority of work this week in favour of fevered fetal huddling. Luckily for you, this post does not revolve around disgustingness that has been fermenting in my poor  lung… instead: Physical human guests of an invited type.

James came to stay with us at the start of Feb., which was perfectly timed, as Andy was becoming increasingly bored of being a Hausmann. Possibly not as great for James, who’s kindness we abused by getting him to carry a washing machine from our friend’s cellar to the brand new apartment (to add insult to injury, we then couldn’t work out how to use the thing in time for him to do a wash before moving on). Similar enforced roles included hefting a footstool that we found on the side of the road all the way back home, cooking several Jamie Oliver style feasts, and even putting together the Ikea pots and pans needed to make the meals. 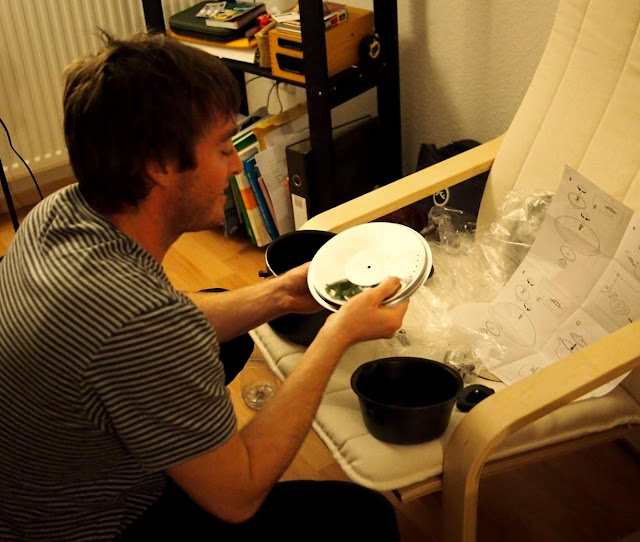 Yeah, we’re pretty much the worst hosts ever.

I had to work everyday, so James and Andy spent the week together going on exciting adventures, roaming through wildernesses, doing architectural tours of Berlin and the surroundings, and becoming BFFs. 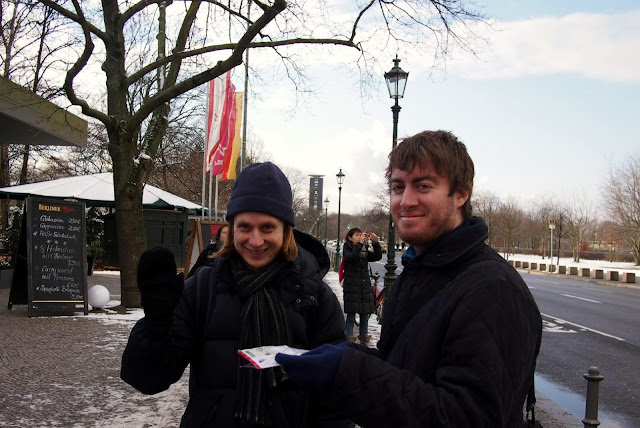 So Andy will have to do a guest blog to fill you in on the meaty part of their adventures… meanwhile, here’s some stuff from the weekend, when they let me out of the lab.

On the Saturday, we went for a general wander, hoping to see some of the cultural and architectural wonders hidden throughout Berlin. 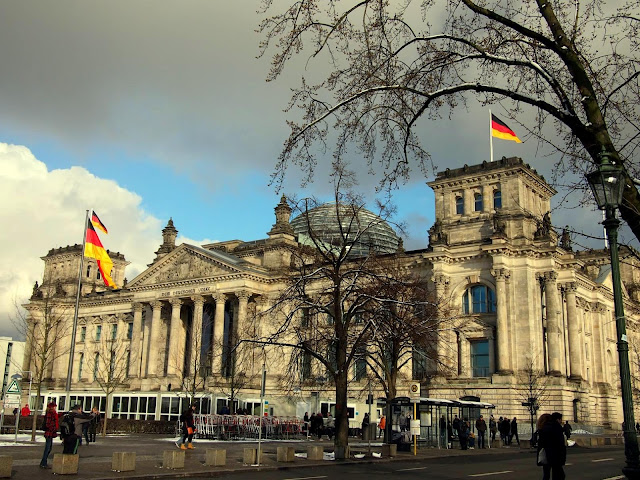 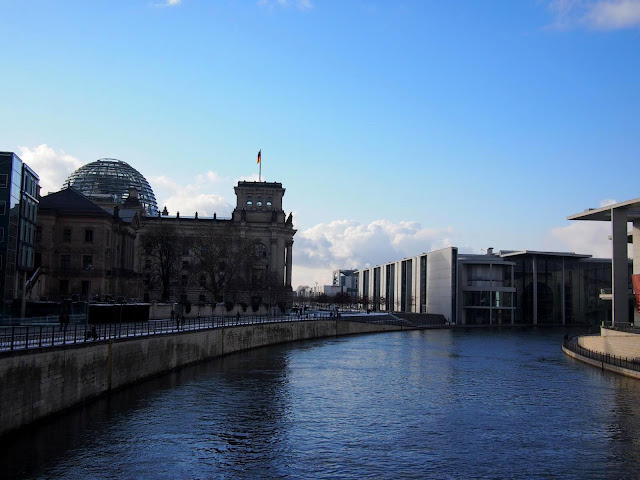 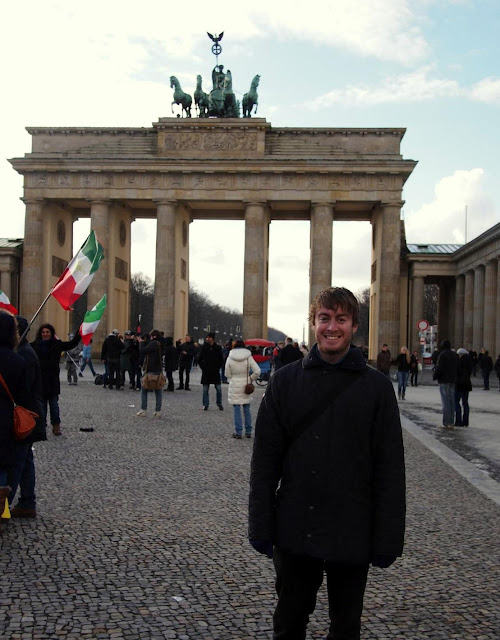 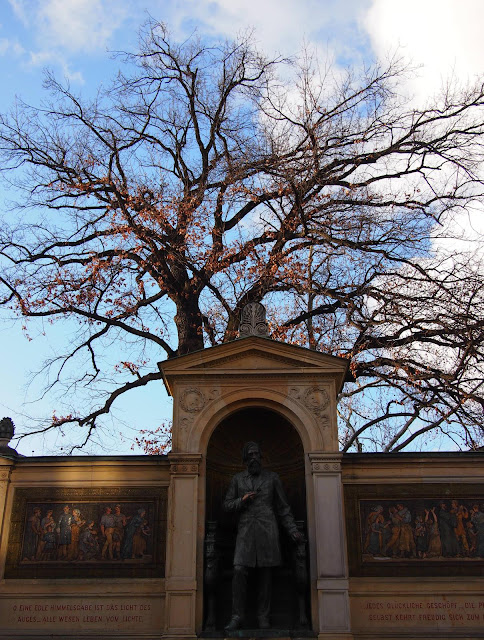 I’m not so sure who this fellow is, but he seems to be in possession of a truly beautiful tree.

For the ‘slightly less cold, more indoorsy’ part of the wandering program, we headed into the Museum für  Naturkunde. 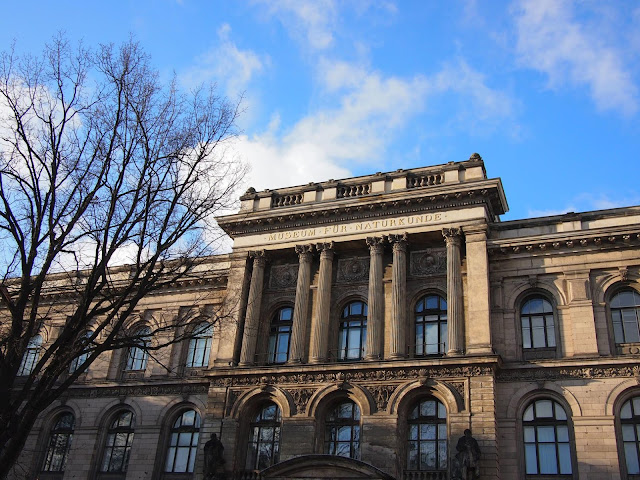 A representative from the museum had come to the Institute several weeks earlier to give us a spiel about the wonders contained within. Honestly, it was a little ‘pitchy’ to me, aimed at investors and not scientists-I felt like he was expecting me to be so overwhelmed by the marvels of which he spoke that I would pull out a novelty sized checkbook or start throwing money at him. He would reel off a whole lot of ‘key performance indicator’ numbers, for example how many children per month were involved in their fabulous interactive science experience workshops, without ever telling me what was so fabulous about these workshops, and how they were bringing the science.
So a little dull, but good enough that I, the choir to which he preached, thought ‘yes, I like science, I shall go see me some science’.

And I must say, there were some definite WOWs about it.
For example: Dinosaurs! 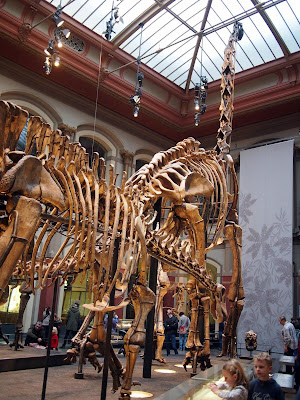 This is pretty much the entrance of the museum, and seriously, kudos to them- if you’ve got yourself some dinosaur skeletons, you want to show them off.
This exhibit was made even better by the fact that, from the side of the room, you could look through binoculars at the skeletons and ALL THE DINOSAURS WOULD COME TO (virtual) LIFE… and prance around the room. Magical! (Scientifical!)

Of course, the kids totally hogged the CGI coolness.

What I did realise is that, apart from learning about Filbert the Dinosaur’s runny nose, knowing that Dinosaurs Didn’t Wear Sandshoes (they couldn’t even if they tried), and wanting desperately to know where the Diprotodon got its pouch from (these are all Conway Brother songs- I have yet to find someone who has shared this childhood moment with my sister and I)… Ariel and I didn’t really go through a dinosaur stage.. and my knowlege is pretty limited.

For example, this is not a Stegasaurus. 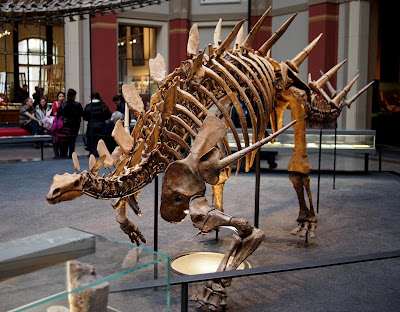 (It’s his cousin, a Kentrosaurus)

And real Pterodactyls (the Pterodactylus genus of Pterosaur) are ridiculously small: 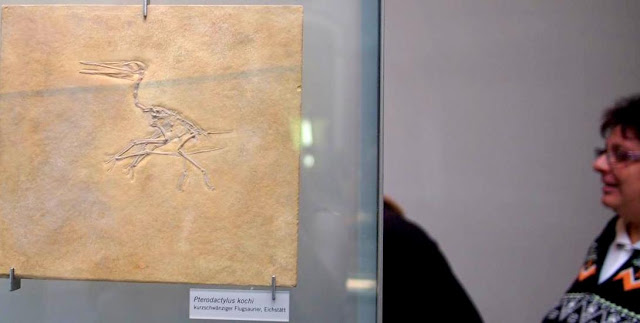 (He also has various cousins, which ranged in size from ‘Tegan’s idea of what a Pterodactyl is’ to ‘actual Pterodactylus/large butterfly’) 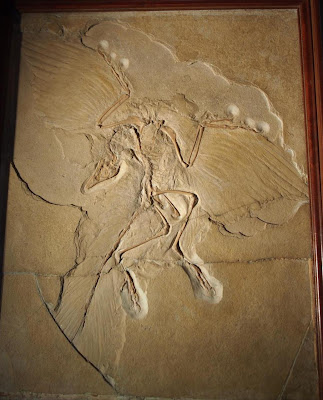 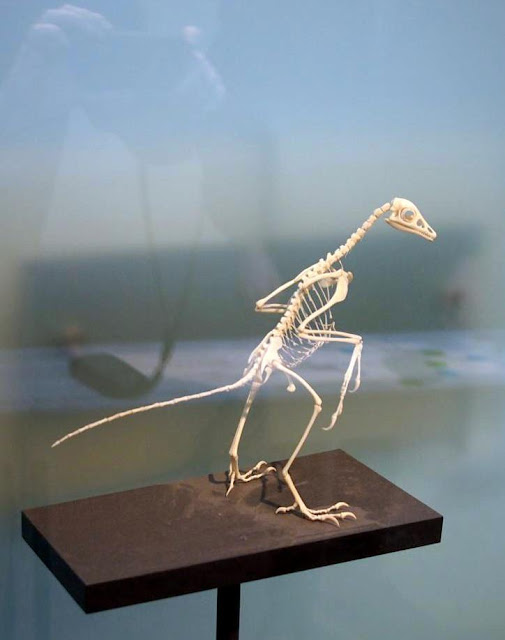 I’ve left my reflection in so you can get an idea of the height.

I have to admit that I did find the Archeopteryx pretty amazing. You know how sometimes you see famous art and you just feel ‘ok, I’ve seen that then.. next’, and other times you’re just blown away and really Get It (the Pieta is one example for me)? Well anyway, Archeopteryx is the star of the Natural History Museum and, I can see why- tiny but magnificent.

The rest of the museum was also pretty cool, although the volume of stuffed animals gave me a sense of exhaustion after a while. They even had an exhibit displaying the winners of a recent Taxonomy competition. 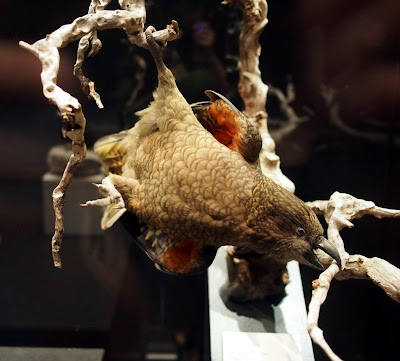 This one won some sort of ‘best in show’. He’s a Kea (*edited- not a Kakapo as previously written), and according to our resident Kiwi, Adam, they are mountain birds that form terrifying gangs, which trash the cars of skiing holidaymakers  (According to the Kiwi film we saw at the Berlinale, which featured a gang instead of small Kiwi children, car-trashing might actually be the national sport of New Zealand).

Of course they also had a Kangaroo: 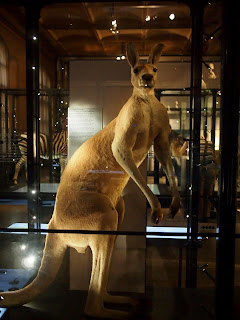 Overall, the museum is super visual. 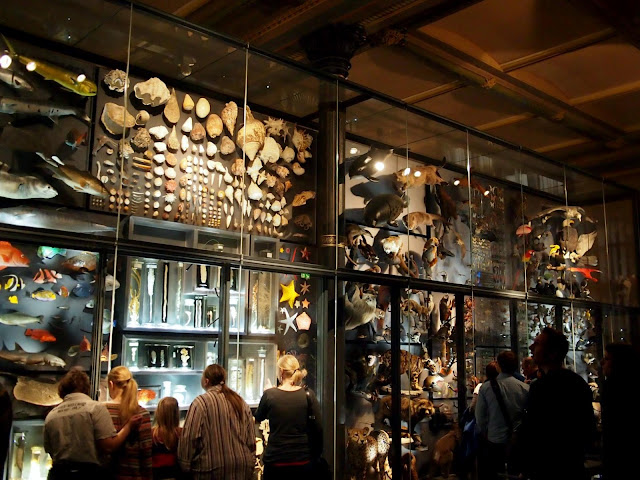 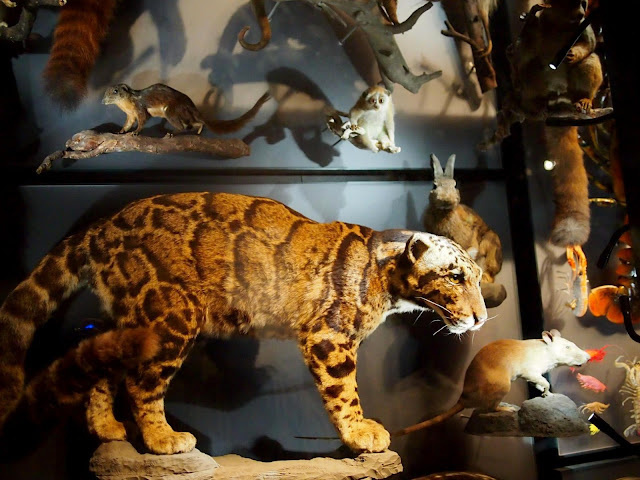 Although it’s possible that some of those ‘visuals’ are a little creepy: 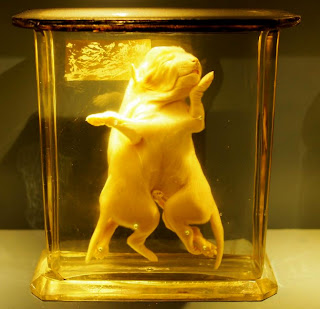 Check out all the specimen jars! 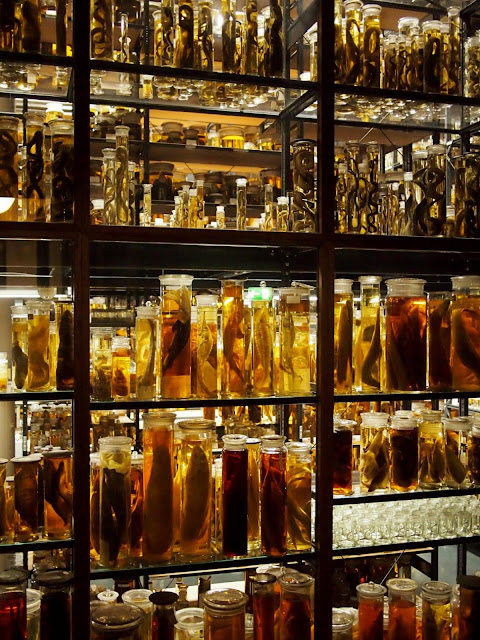 It’s slightly hard to tell from the photos, but rather than being a single wall, this exhibit actually encloses a lab area, and the museum is particularly dedicated towards analyzing their billions of specimens, 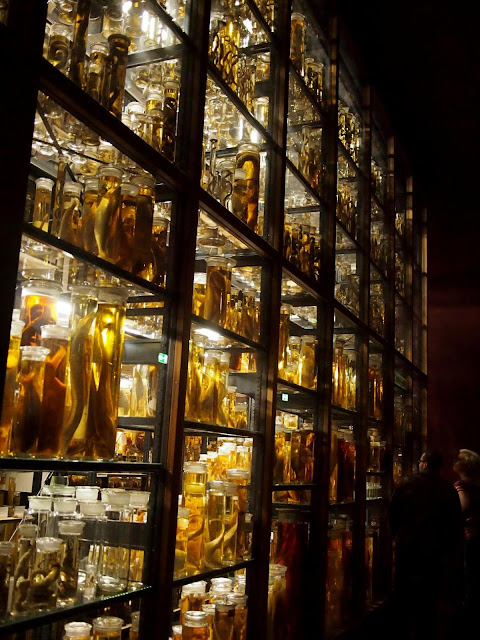 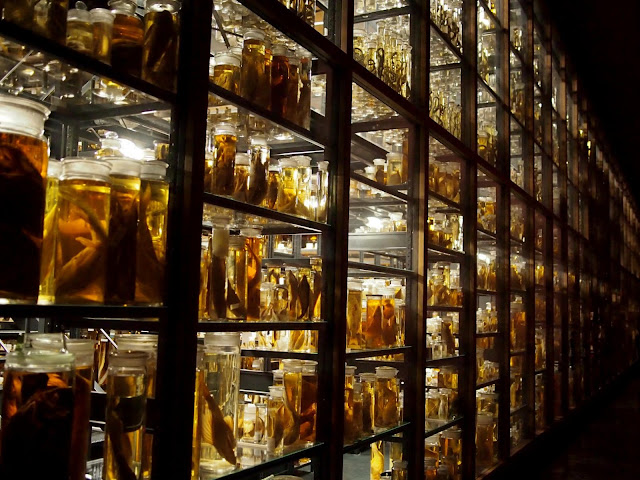 I think it’s worth a visit just for the ‘art’ value of the place.

Anyway, after the glow of the museum, we headed back outside for some more hiking and climbing and frolicking. 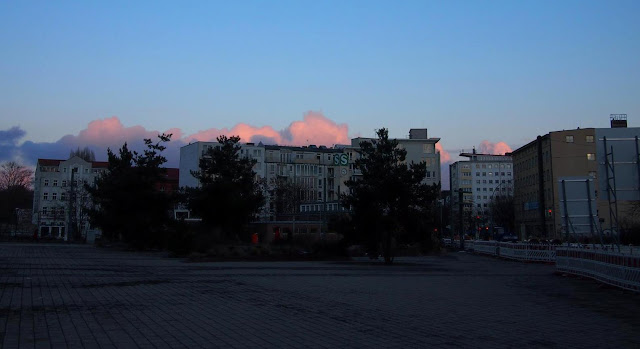 Which also involved some posing near the Wall. 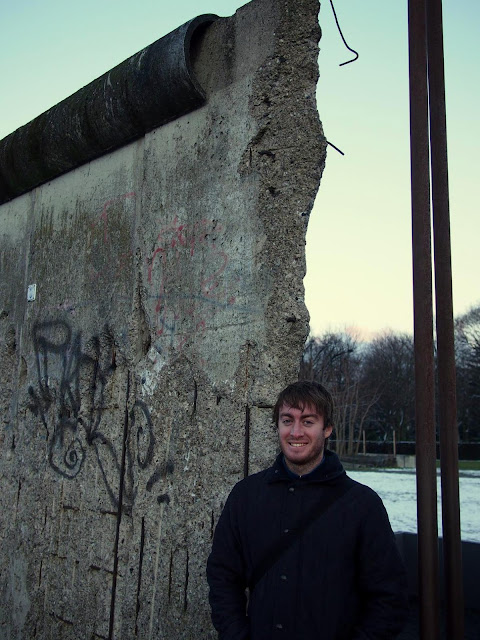 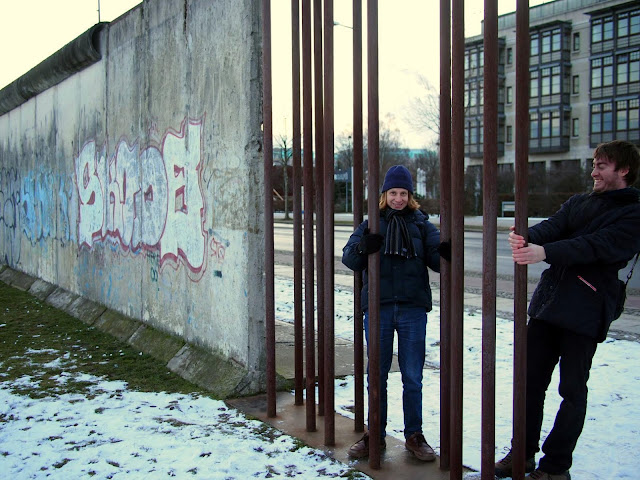 And some more architecture. I thought this was called the Reunification of Unification Church, but I can’t seem to find it on Google. Alas, we weren’t able to go inside.. but it reminds me of somebody (possibly wise, but I think most likely Homer Simpson) talking about ‘building cages for God’. 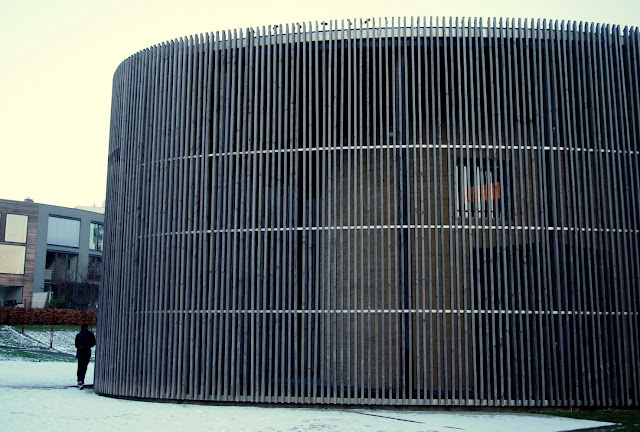 The surrounding area contains statues and memorials and information of the happenings around that part of the wall. 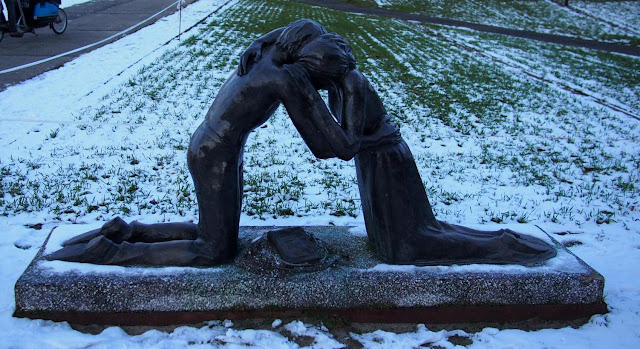 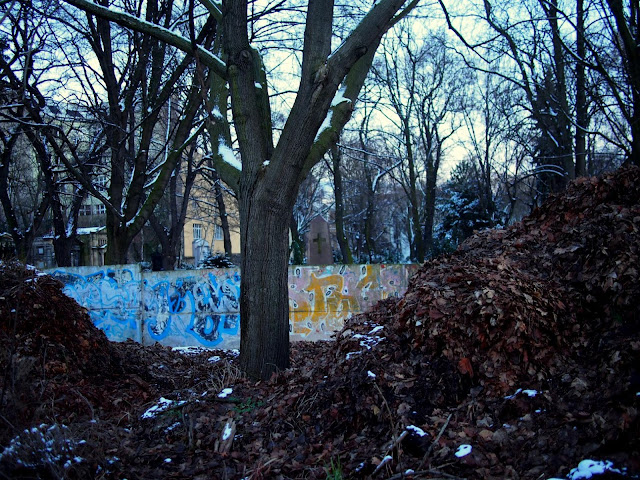 Nearby is a graveyard, a large part of which was removed during the divide to create a No Mans’ Land at the wall. 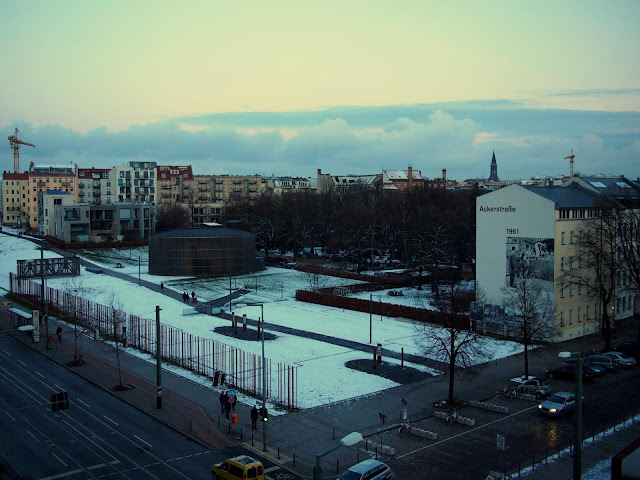 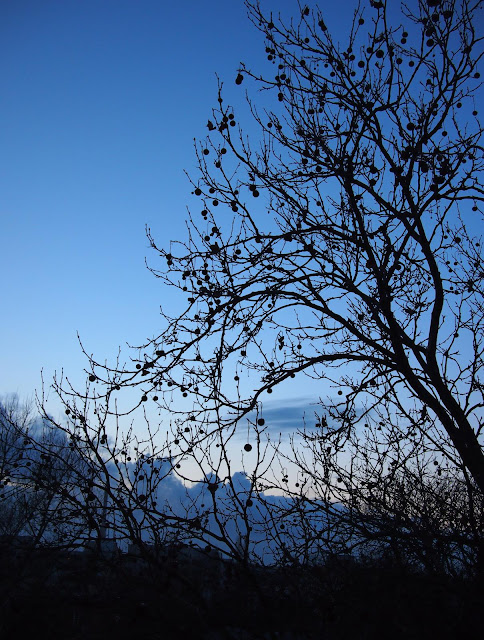 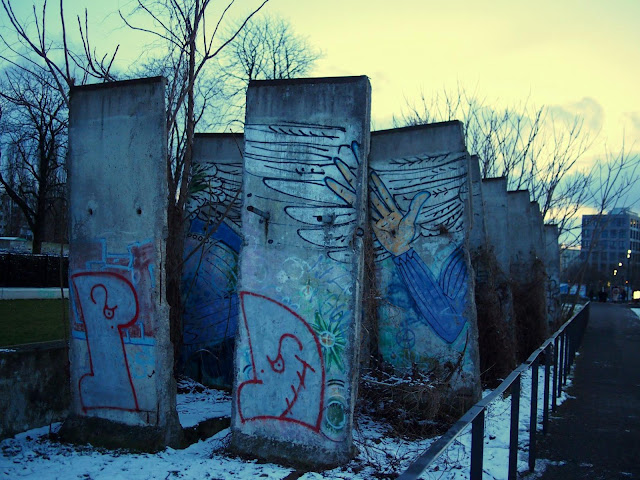 Quite a cool city to walk around!