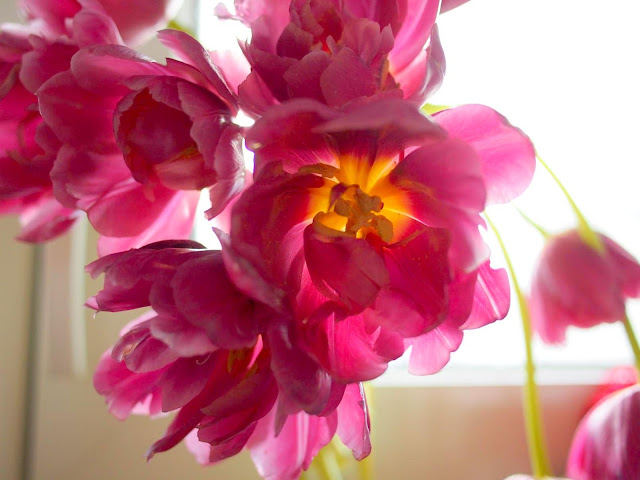 Alas, only in the confines of our centrally heated apartment.
I’ve been buying lots of flowers, not only to brighten up the place and because they’re so bloomin’ (why yes!) cheap here, but because I imagine that their timely death acts as a sacrifice, which pleases the weather spirits,  who will ultimately grant us The Warmth.

One of my favourite ‘floral bunches’ is the cherry blossoms, which you buy as a heap of boring-looking sticks with tiny buds, but which gradually bloom into very lovely delicate flowers.

Not merely pretty, but also makes me think of an episode of M*A*S*H in which the team are all huddled around outside, on a clearly freezing cold day, whilst Radar unveils a cherry blossom twig to ceremoniously mark the first of spring (which has been raised in a hot-house). 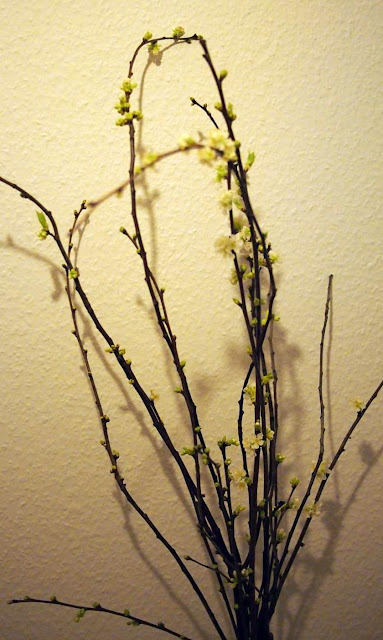 We’ve seen the first of spring by the calender definition, and also by the more scientific ‘somewhere near the 20th of the month’ definition, and, I have to say, that at minus 6, it’s still not entirely Sprung-y.

So the flower shops and I are desperately trying to cultivate the feeling.

And now, the Easter brigade has joined in: 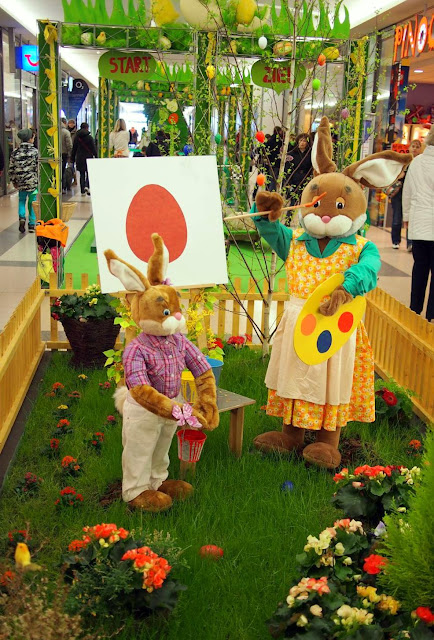 The hauptbahnhof is filled with oversized terrifying mechanical rabbits employed in menial tasks. Their brightly coloured floral sweat-shops are enough to make anyone want to go outside.

Because outside is away from the rabbits. 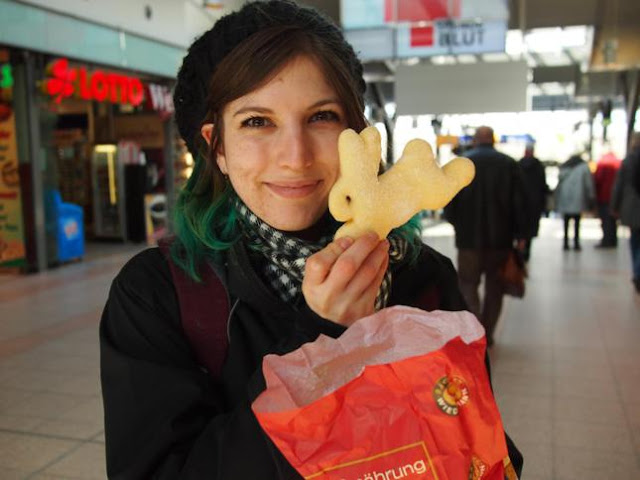 Of course, there are also rabbit-themed baked goods, but they were, as it so often turns out when you buy food based merely on it’s novelty value, somewhat disappointing. Anyone who has bought a dinosaur doughnut past the age of 6 will understand this tragedy.

But I digress.
Despite the cold (and the nasty biting wind, did I tell you yet about the wind?), last weekend die Sonne Scheint!
Or it did shine. Now is Monday. And night. But we haven’t got round to past tense in german lessons yet.

So to celebrate both this, and the slightly greater ease with which I can now breathe due to a belated triumph of my immune system, we went a-wandering 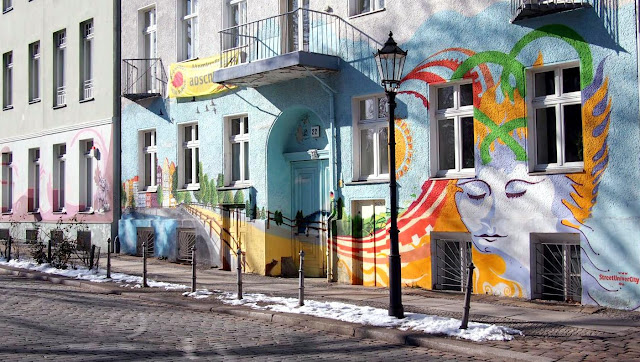 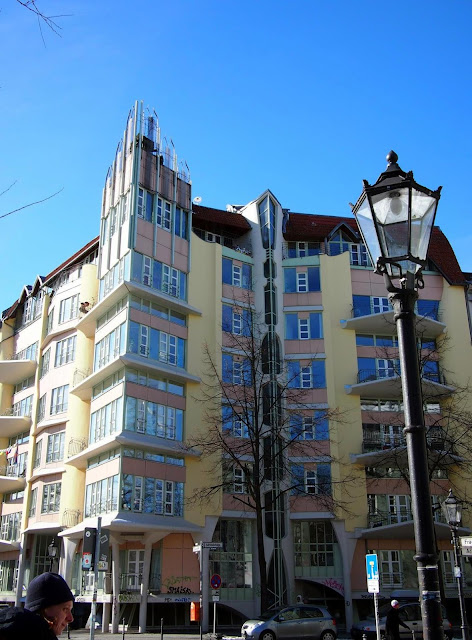 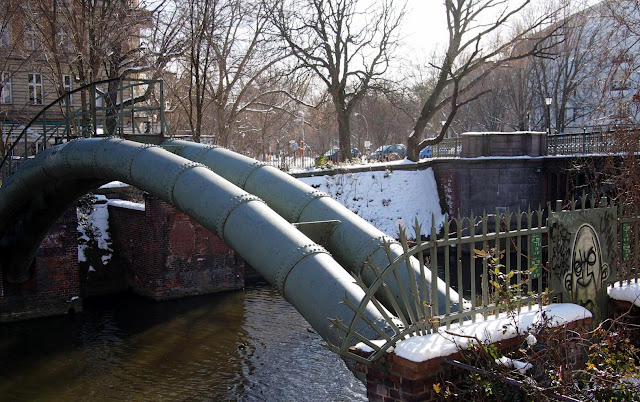 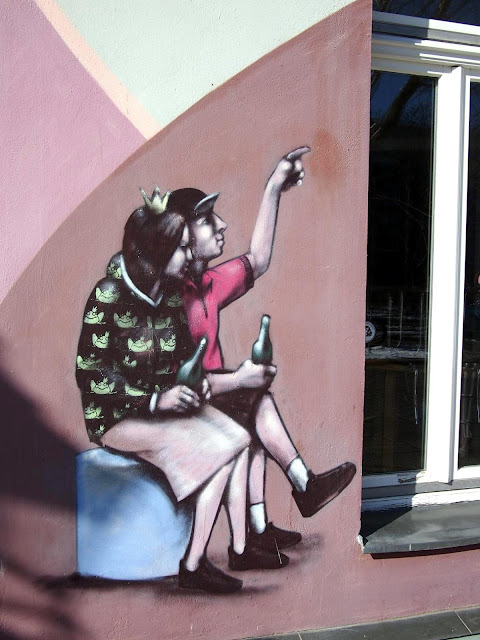 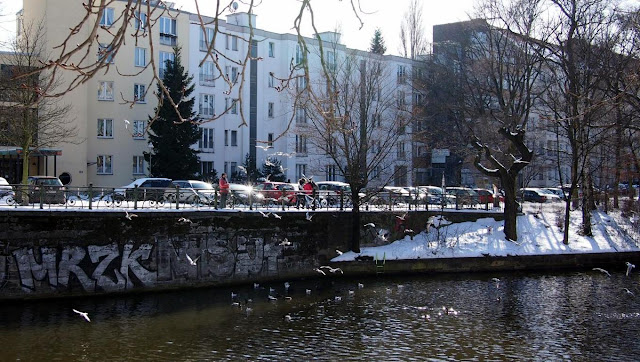 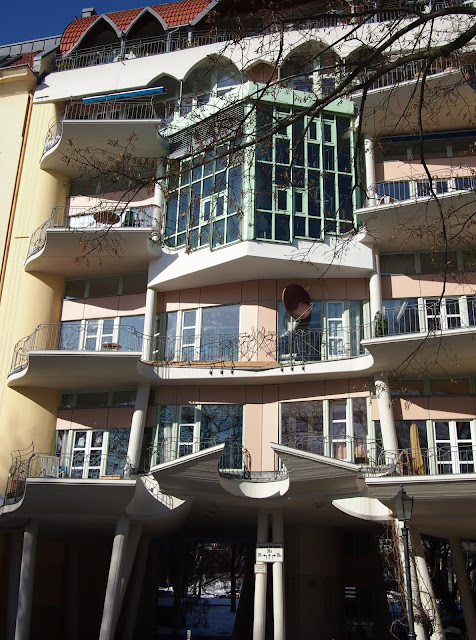 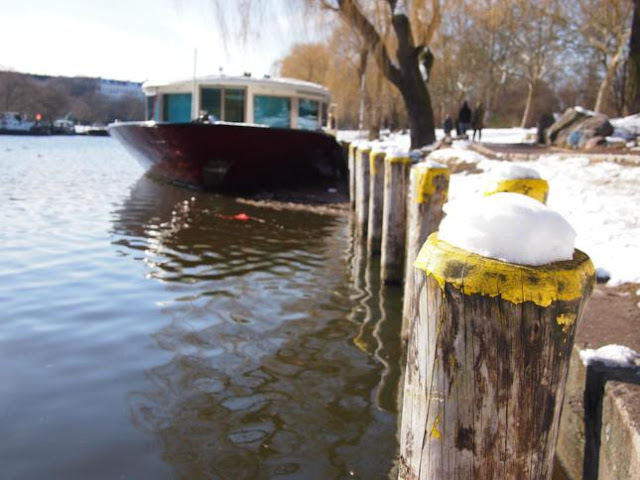 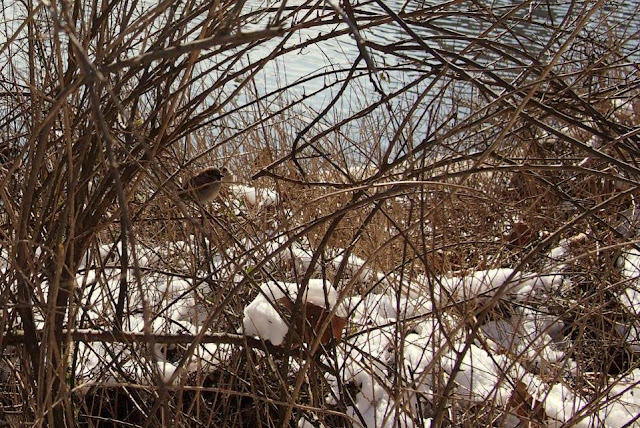 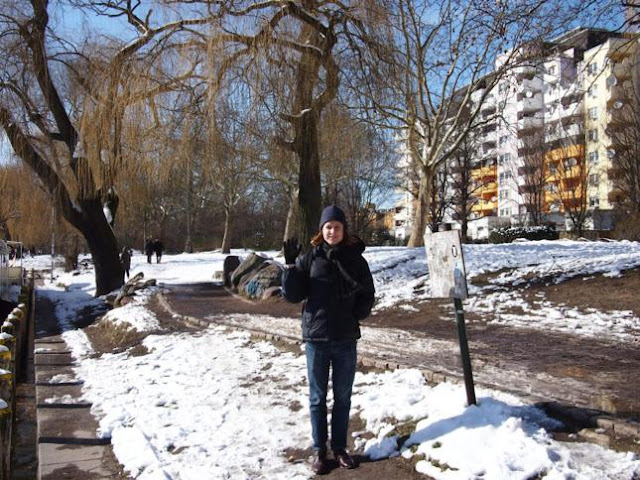 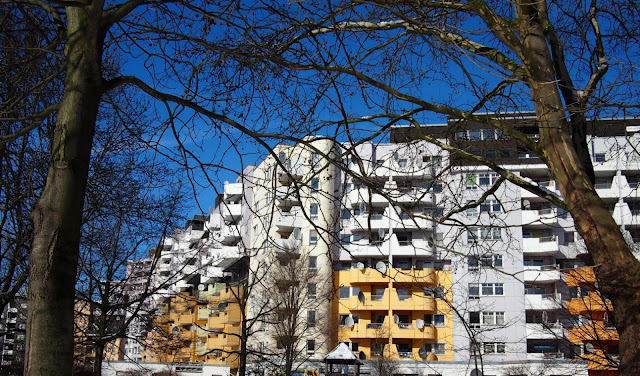 These are all from around Kreuzberg. We had a pretty nice-albeit-freezing walk around the river, along with the 3,000 other Kreuzbergians who had taken to the streets in the hope of getting enough Vitamin D in their system to last through the next patch of ‘weather’. We also managed to find this amazing store that was a combination art/material/sculpture/furniture/modern design/architectural/stationary store.

As a kid, my mother only bought me the 50 for 1 dollar types of pencils  (let’s be honest, I couldn’t be trusted not to lose or break them).. so now I have a unhealthy obsession with all types of stationary. I think it also helps that I’m a naturally chaotic person, and the beautiful folders and pencil trays and cardboard boxes feed into an unrealistic belief that if I had all the pretties, I would suddenly be capable of remembering where I put my passport, or which letter needs posting…

After a short period of wandering, gazing, and lusting, Andy re-discovered me in the ‘crafts’ section lovingly fondling some dried moss and dreaming of terrariums: 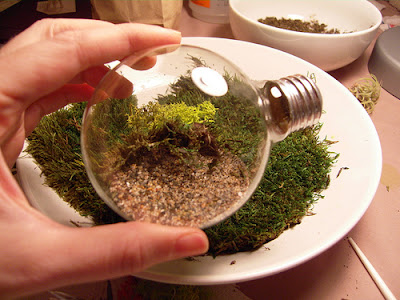 As he had only eaten a single egg and two pieces of bread for breakfast (having snootted his nose at my bunny cake), he was well into the ‘starving’ part of his day, so we hurried over to ‘Kreuzberg Proper’ (the place with the food) and scarffed massive amounts of food at Knoffi. 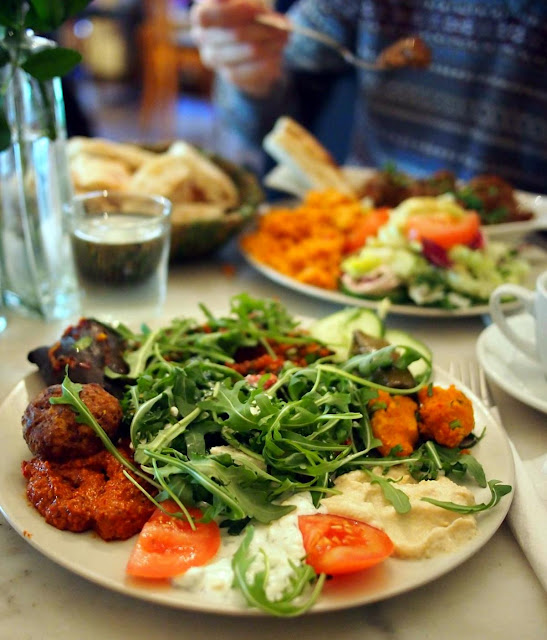 Sabine took me to Knoffi when I dropped by for the IMPRS interview last April, and I was pretty keen to go back and re-visit their ‘Knoffi teller’- a massive vegetarian tasting plate with Dolmadis, stuffed aubergines, sheeps cheese, various dips and turkishbread and salad and many other hidden delights.

I had tried to drag Andy in previously, but he found the environment a little heavy. 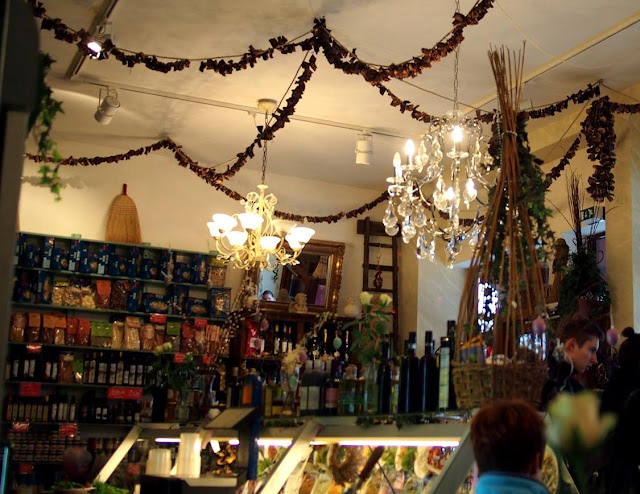 Personally, I’m a little in love with it! I like to imagine that this is how any of the members my extended (particularly Marriot) family would stock a shop if they ever took to the trade. 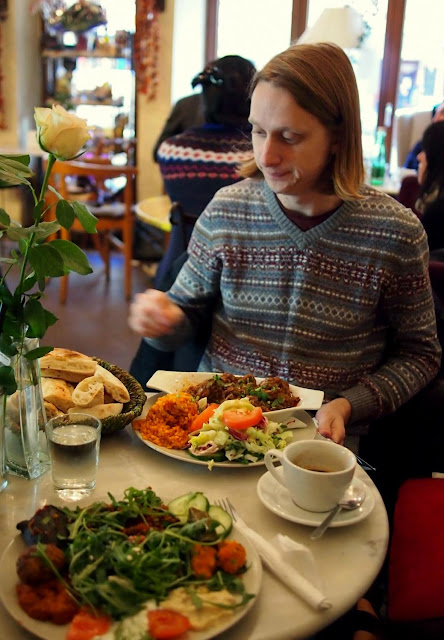 Luckily I was able to dull his senses by imposition of prolonged fasting and force spicy chicken on him in his moment of weakness!

By the time we had gorged, evening was well on its way, so after a bit more wandering and a look in a few shops, we headed back to the homestead. 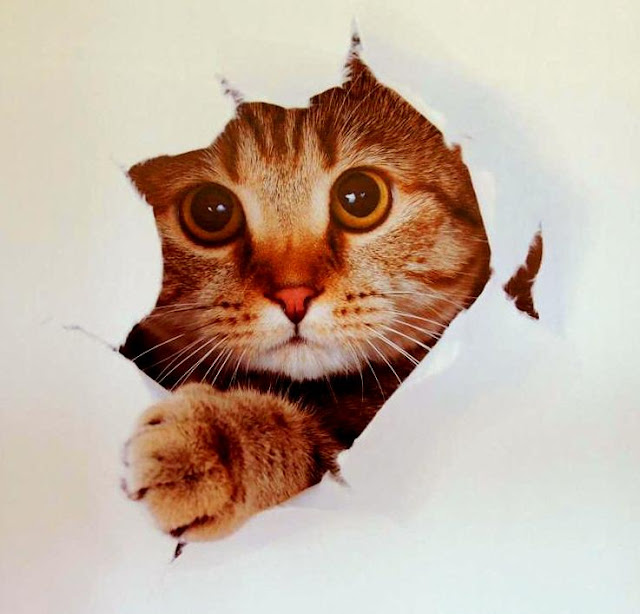