Two Fridays ago, Andy and I joined a gym.
It’s something we’ve been talking about for a while- I’m terrified about my inability to breathe hard enough to even run for the bus, Andy’s terrified of his ol’ bones getting older- and we’re desperate to get into the habit of exercise before, as above, ‘life happens’, and we just don’t.

So we’re trying to work out the new routine of work+German lessons+homework that comes with that+ exercise. Plus blogging. Plus sleeping: the sun is getting summery and setting after 8pm, and rising in the unholy hours, and what with our lack of curtains and our confused body clocks, out sleeping patterns are super-disrupted.

But on to The Holiday.
And the pictures.
“Someone” recently complained about the picture to word ratio. I’ll try to get it right this time.

So let’s begin with Saturday, our second day in Amsterdam.

Lo! The Sun did Shineth.
And after many months of darkness, the people were confused, and squinty: 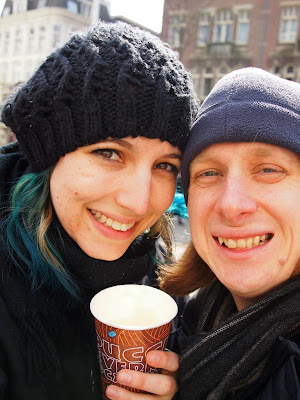 One of the lovely things about the weekend was that even though it started with snow and cold and very much not-unlike-and-only-several-degrees-warmer-than Germany, the thermometer rose and the sun shined more every day… building up to a crescendo cut horribly short as our plane flew out of Amsterdam, and back under the cloud cover that was Deutschland.

After becoming acquainted with another horrible aspect of our hotel: the breakfast buffet, we headed onwards. First, to check out a bookshop, because Andy is a little trufflepig when it comes to sniffing out anything that contains real live words.

I’ll be honest, this was a pretty awesome shop. Apart from the massiveness which included every type of book on multiple stories (and a long, winding staircase lined with books), it had…..a Printing Press! 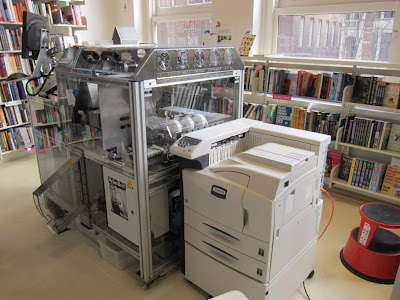 Unfortunately we had to rush through a bit to get to the central square by 11 am and hook up with the Free Walking Tour group. These tours are run by the Sandeman group, and found in many of the major tourist cities across Europe. Basically you wander around the city centre and surrounding areas, check out all the major tourist things, learn a little history, hear some funny stories, walk a little (it’s about 3 hours long), and then pay by tips based on your estimation of the quality at the end.

Even though some of the facts might be exaggerated (a Dutch man, clearly a Killjoy for a living, came up to me while I was listening and told us ‘it’s all lies! the company isn’t even Dutch!’), I would recommend it. For the entertainment value alone, or as a good way to get your bearings, or as a way to meet up with fellow tourists.

Or just to see some of the beauty of the city: 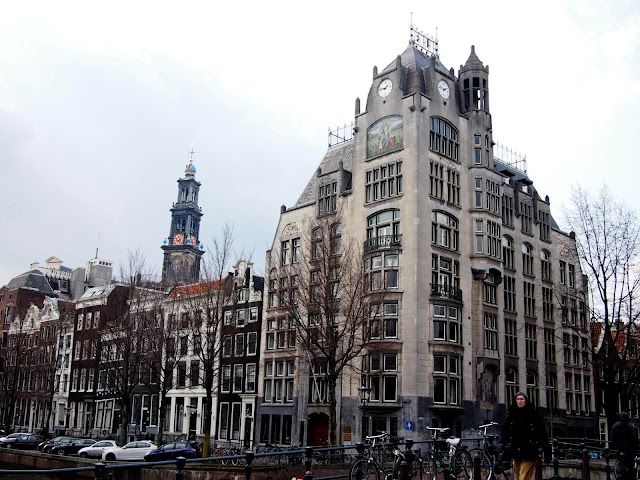 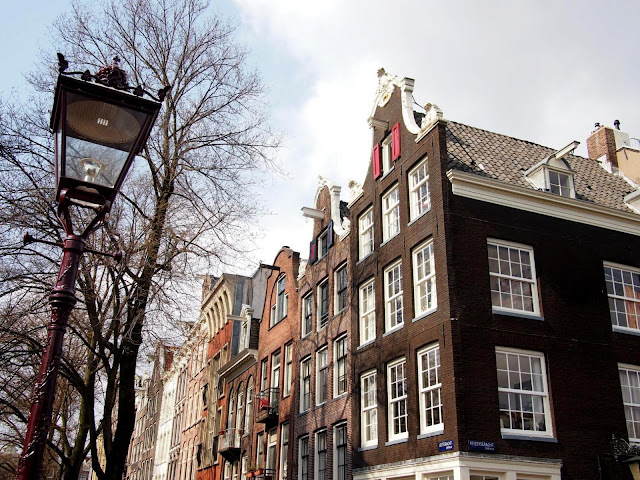 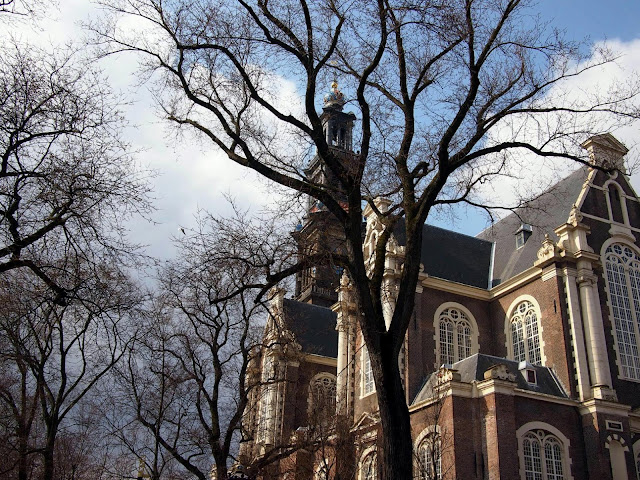 As the only bit of history I’m going to bore you with, this guy (below) is Multatuli. Real name, Eduard Dekker, but prone to drama: multa tuli apparently means ‘I have carried much’ in Latin. He wrote ‘Max Havelaar’, an thinly veiled biography about the maltreatment of the Indonesian people by the Dutch colonialists, and through it is said to have ‘ended (Dutch) colonialism’.

Remind me to read that some day. 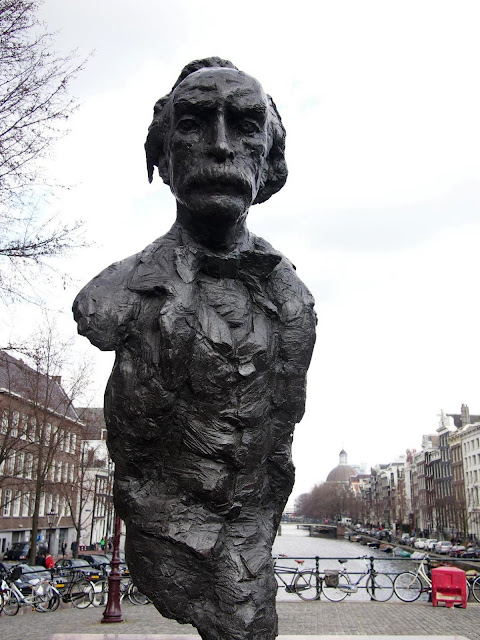 Onwards with the show. But first, let’s have a quick interval as we check into the closest Albert Heijn to look for Stroopwafels.
Alas! Also empty, but they did have this: 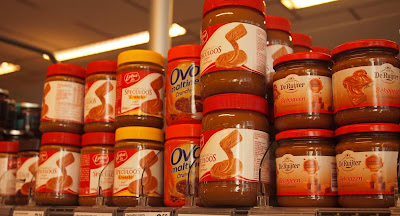 It’s Spekulaas, which are delicious spiced shortcrust cookies (like gingerbread but infinitely better), made into Spekulaas butter by act of crumbling and addition of butter.
I did not get it because I want to live past 25. But I have tried it. It is exactly as delicious as you would imagine (providing you are imagining VERY).
Also this:

You know how most people dream of having a cellar with vintage wines when they’re older?
My dream cellar looks a lot more like this.

Anyway.
Out of all the museums in all of Amsterdam, the one that we both wanted to see the most was the Vincent van Gough Museum.

Of course it was closed.

Luckily, everything had been moved to the Hermitage Museum, so we headed there instead. I was a little worried about this, because in ’09 we went to the closed (I think it’s finally open this month after 10 years of renovations) Rijksmuseum, and had to pay the full price to see about 1/8th of the collection huddled into a shed.

When we got to the Hermitage, it had a really big line. Which I guess is a good sign. We bided our time by posing: 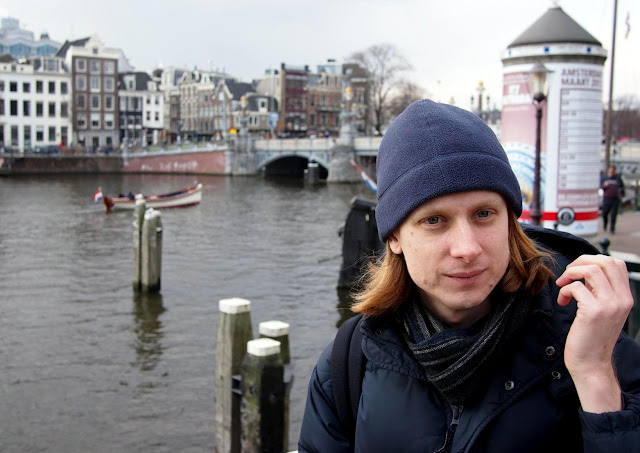 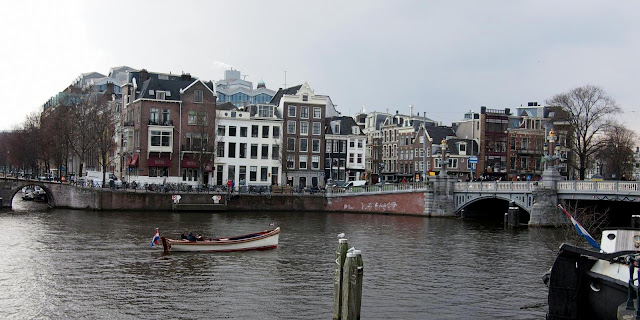 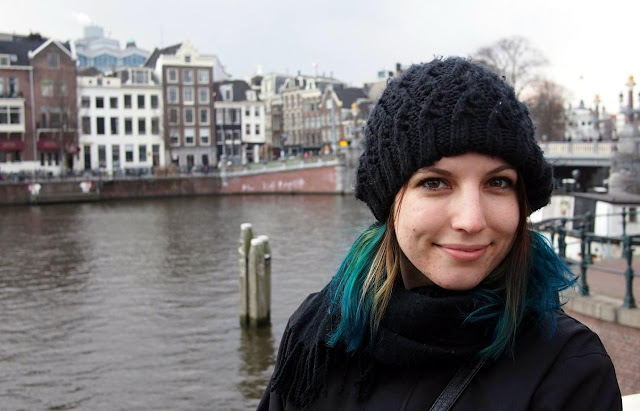 I guess we spent a few hours inside.
It was amazing. It was beautiful. You should go and see it.

I wasn’t sure about the photoing ability, and was a little worried about being shouted at, so these are web-stolen (via http://www.iamsterdam.com/en) 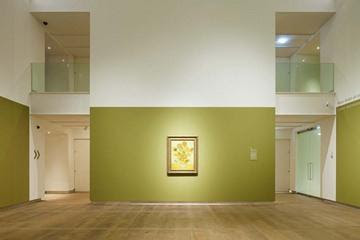 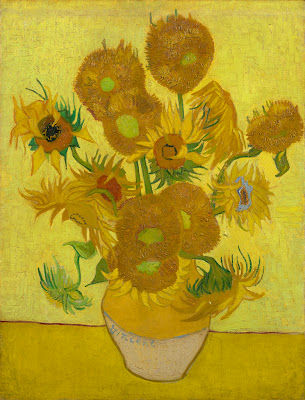 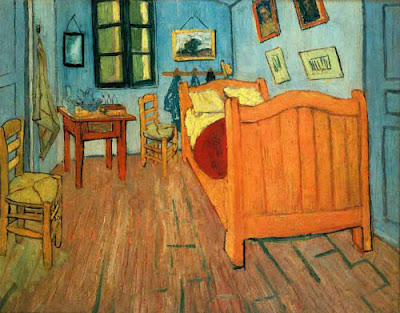 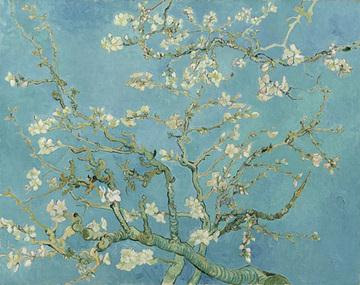 The points being:
1) It was beautifully set out (rooms divided for periods in his life- although strangely all of the details about him seemed to skirt the depression part, which seems non-trivial),
2) There were many famous and wonderful pictures,
3) They were breathtaking,
4) But really, Vincent cannot translate into photos,
5) You need to go to there.
6) Now.

As I mentioned, at the time at least, Amsterdam was doing a lot better than Potsdam at the whole ‘getting out of winter’ thing. Not realising that they were just a normal part of a normal spring, I got very, very excited by the crocuses outside the Hermitage. 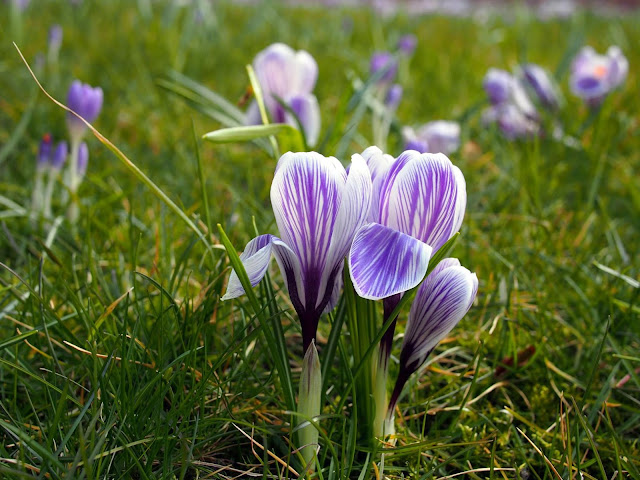 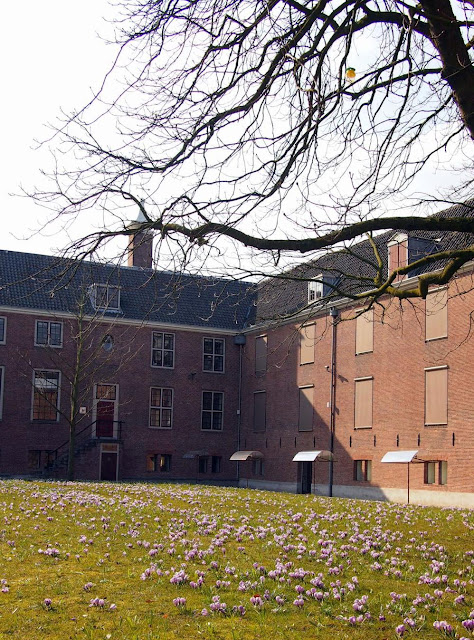 But then, I think you’ll agree that they are very, very pretty. 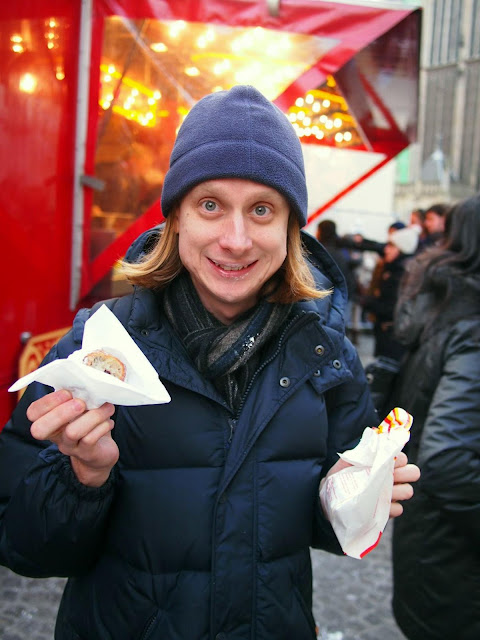 … and then, because it was too late to hit another museum, decided to ride some canals! 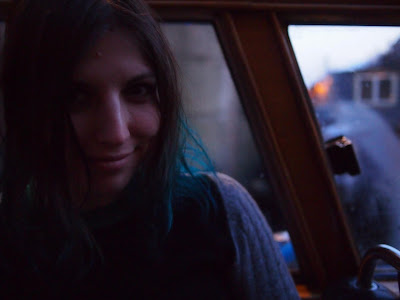 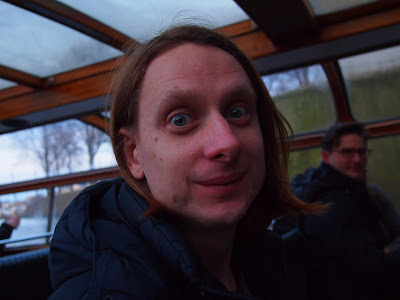 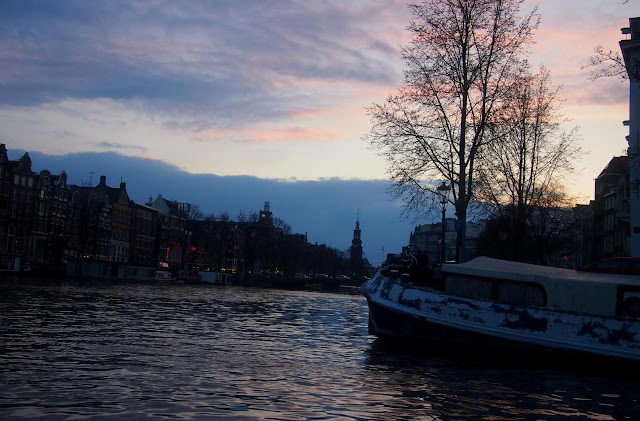 We went around sundown, which sounds romantic- but was not (we were sharing our little boat-table with some very loud Italian tourists), although it was definitely enjoyable.

Plus we got to hear some more Amsterdam facts, and, confirm our allegiance to Deutsch: each fact was said in Dutch (a.k.a-incomprehensible), then German (slightly more comprehensible, and much nobler), and then English. 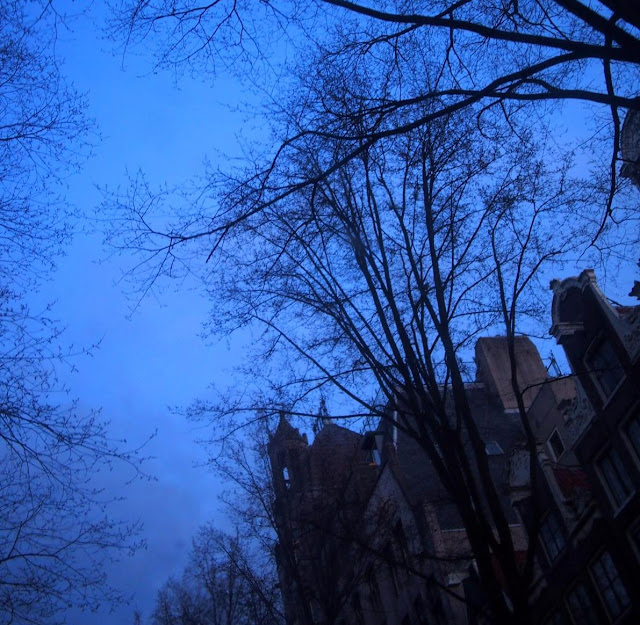 (These photos are all though the glass roof of the boat) 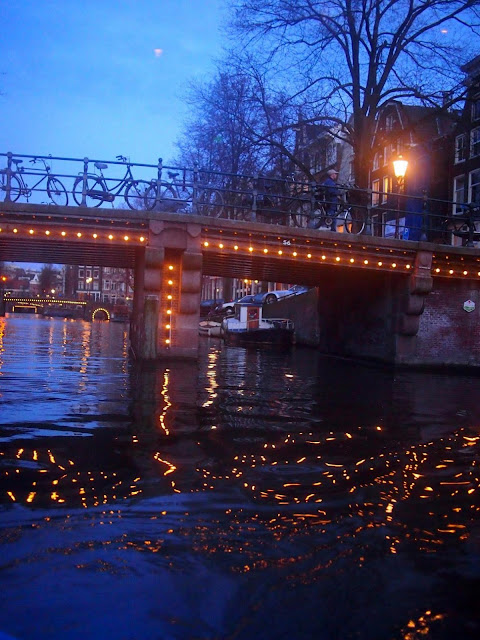 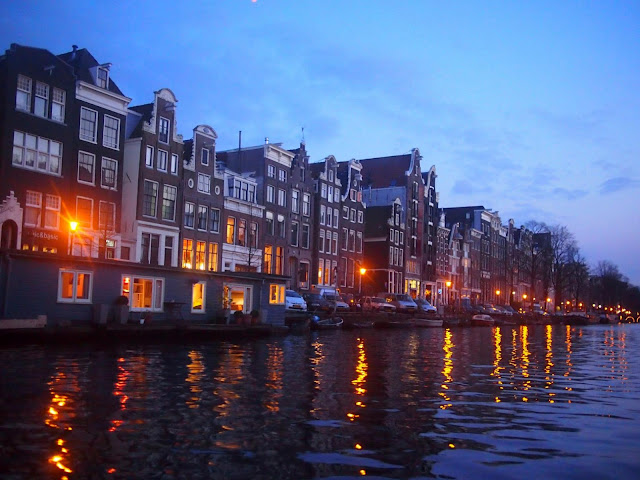 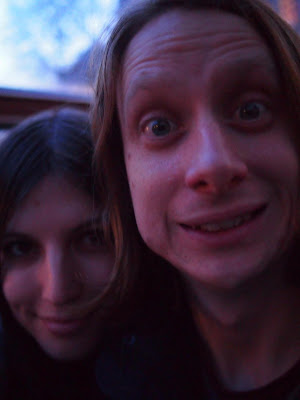 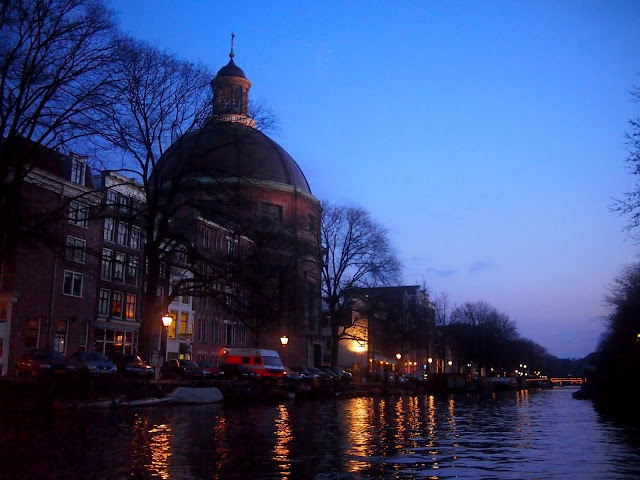 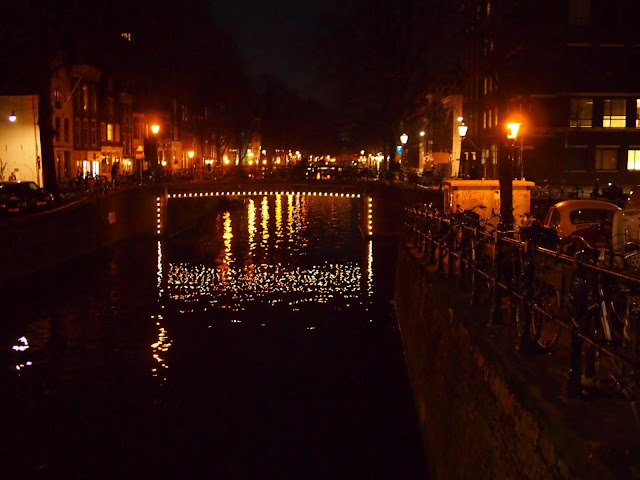