Day Three: In Which Things Can Only Get Better

By the morning I still wasn’t totally convinced of this whole ‘eating’ concept, but after a few dry things went down and stayed, I soon got back into the swing- and in no time had resumed my normal shoving of large fistfuls of cake into my mouth.

In the six hours of horror, we had somehow made our way from Palma (pictured below, above Alvaro’s head), to Sa Rapita (near his stage-right shoulder). 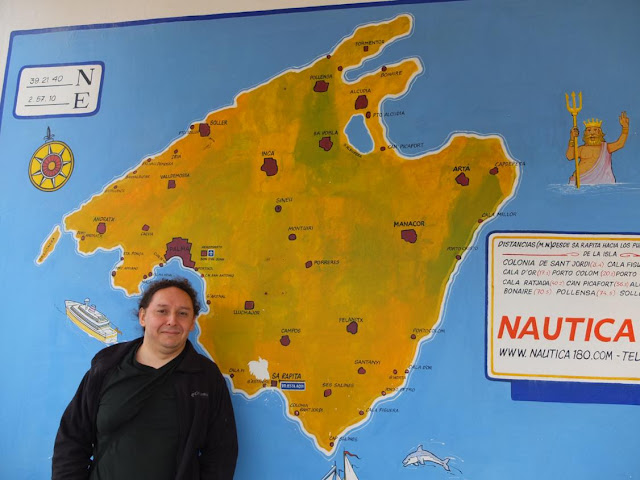 (Photo from Marta)
I think the map makes the city look larger and more important than it seemed in real life- the town was way less touristy and much less ‘happenin” than most of the others we ended up seeing on the way, and all the people seemed to be Siesta-ing for…. all the hours we were there. Still, it was very nice to get off the boat and walk on non-wobbly land. 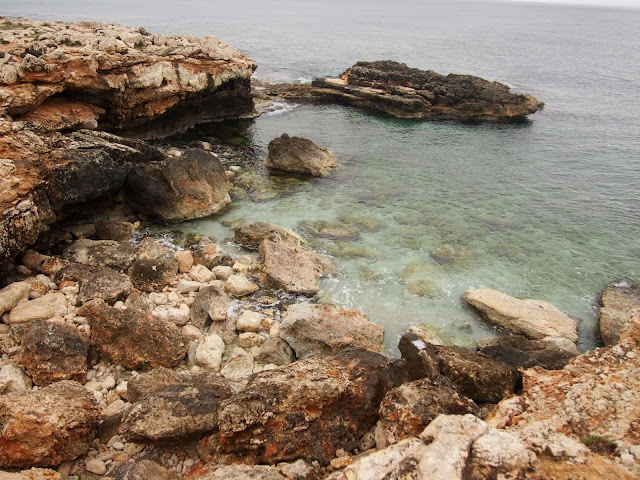 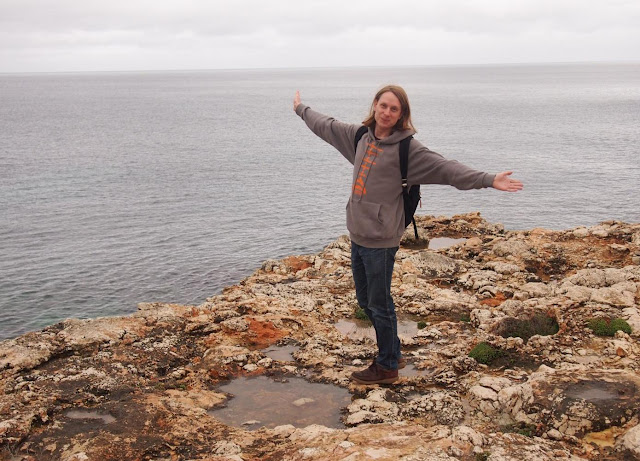 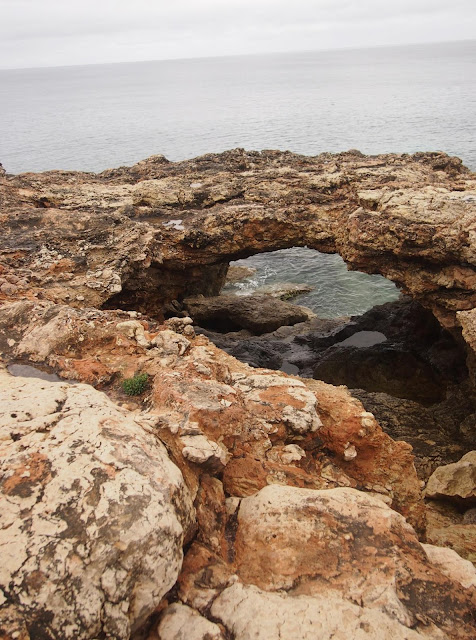 To be honest, once I was off the boat, I wasn’t entirely sure I wanted to go back on. People kept offering advice and helpful suggestions like ‘you know, if you try to not vomit, then you won’t feel like vomiting too much’-which….. well, it was very kind and well meaning, but not really what I wanted to hear.
Plus, I think motion sickness is impossible to explain to people who don’t have it, and it’s really hard to have non sufferers tell you that if you just followed some simple rules, like ‘looking at the horizon’, it’ll all go away. Even though I know it’s not meant to be, it sounds like something between being patronised, and being told that I’m effectively causing this stupid physical reaction my body is having by not following the little rules, and I may, due to certain past events, be slightly sensitive about people telling me that I am sick by my own cause. So I may have been a bit of a moody little ingrate that day. I apologise. And thank Marta for getting me to pharmacist and trying to get me to the doctor.
Anyway, Andy mentioned that at the time when it was particularly wave-y the day before, he had felt motion sick for the first time in his life… but he seemed to have been examining the feeling almost scientifically and objectively, as opposed to the ‘completely in incapacitated and vomiting violently’ way that I had experienced it.
I’ve experienced motion sickness since I was very young.. although this was by far the worst. The second worst was probably when  we went on this crazy winding road up a mountain in Indonesia when I was about 10, to see the sunrise over Mt Bromo… but I’ll admit that I’ve come to the ‘I need to get off’ stage multiple times…. and sometimes over stupid things: once I managed to make myself sea sick just by snorkelling.
Nonetheless, I’ve definitely ‘grown out of it’ to some degree. I take public transport now everyday, and can read on trains, and sometimes even buses if the distance is short and the road smooth and the air not too hot.  Which is my way of explaining that I didn’t think it was entirely unreasonable that I could survive on the boat for a week without pain and death.
Plus I had PILLS.
And I am a firm believer in Science.
The lady at the Farmacia we arrived at clearly was not.
She tried to sell us some sort of homoeopathic crap with caffeine in it, and then tried to flog those pressure points wristbands. Marta, via Alvaro, kindly told the lady where she could put here caffeine lollies, and we eventually beat some anti-vertigo pills out of her.
I was spared going to the doctor by the fact that the bus only ran from the small town to the slightly larger nearby town twice a day, and then only if you rang and booked the bus 24 hours in advance. 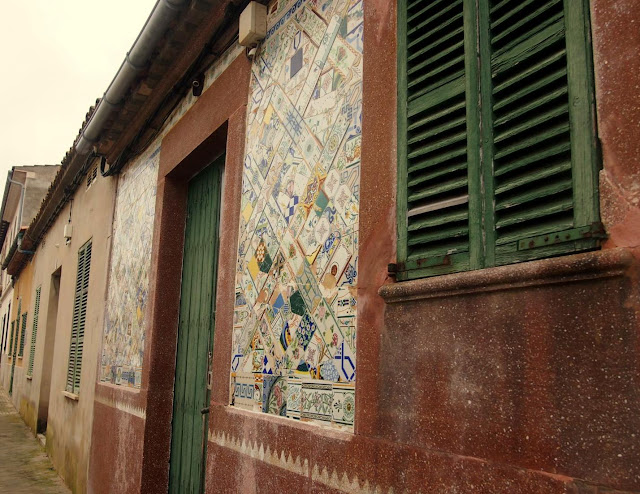 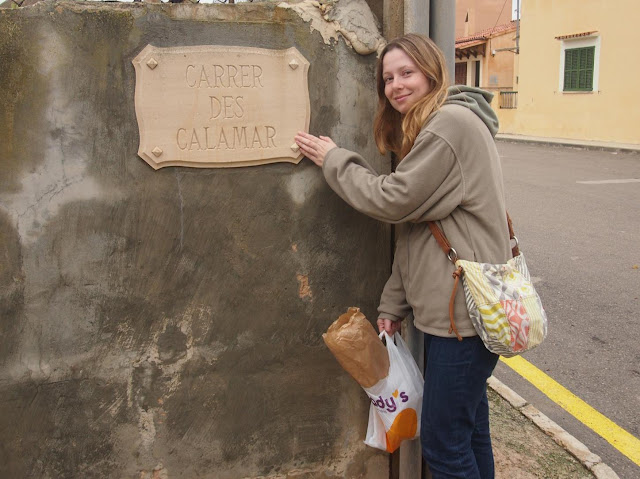 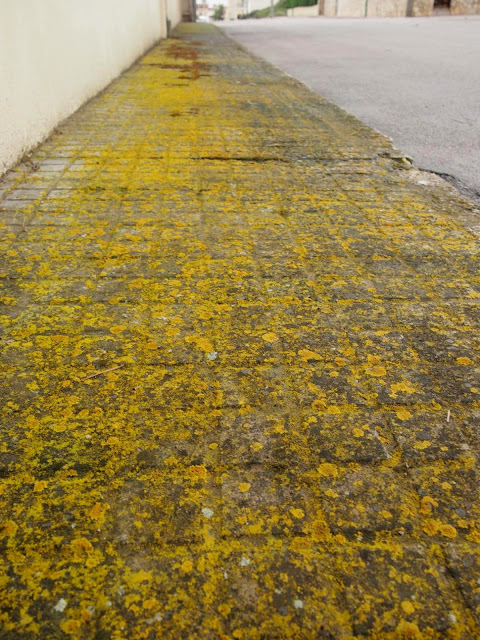 When we had bought some supplies we headed back to the boat, where the Cap’n assured me that there was no wind, and very little waves. We would sail along the coast- for only a few hours if I could take no longer, or further if I was doing fine. I took a quantity of pills that will only be described as ‘multiple’, and was allowed to drive the boat.
Check out my concentration: 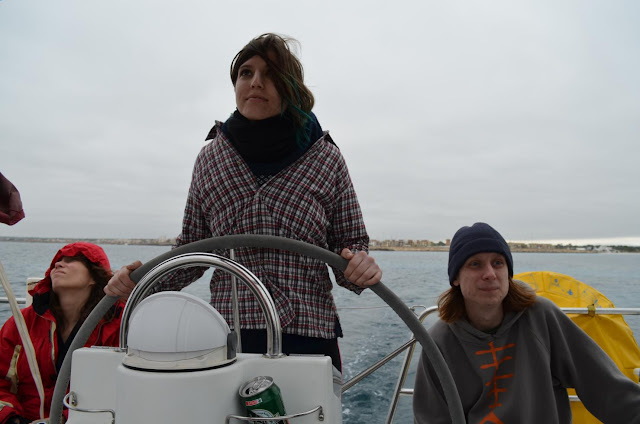 (Photo from Alvaro)
And I didn’t even feel sick!
(Well, only a tiny bit- a two on the one-to-vomit scale)
Although after a while I did feel a bit bored with the steering.
And sleepy.
Seasickness pills make you very very sleepy.
So I went down below, and slept my way to the next port.
So it wasn’t perfect. But it was one hell of an improvement.