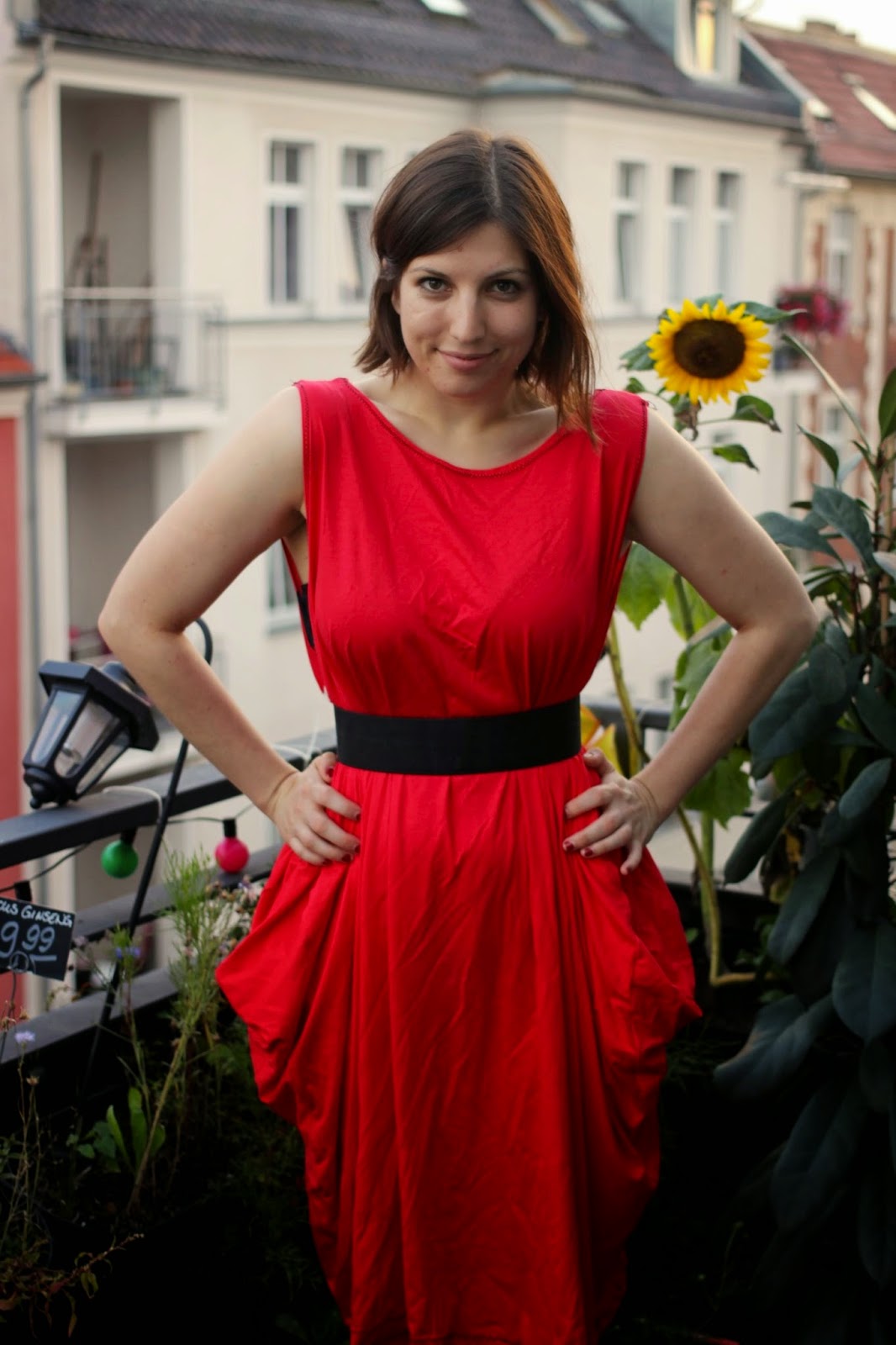 I thought I’d show you the new dress I made…

Plus, I can also use this opportunity to show off my new hair- seeing as Andy stole my thunder by cutting his hair the day after mine last weekend.

The dress is by ‘Teach Me Fashion’, an Aussie indie pattern company. However, I originally found it via a blog I’m following- ‘Sewn by Elizabeth’ – she recently did an interview with the mother-son team who are developing the company.

I love the idea of pieces of clothing that are somehow transformable. But after a very poor attempt at actualizing something blossoming from my imagination that involved buttons and a detachable skirt several weeks ago.. I happily fell upon this, and decided to try something a little more basic, and something that already had a pattern. 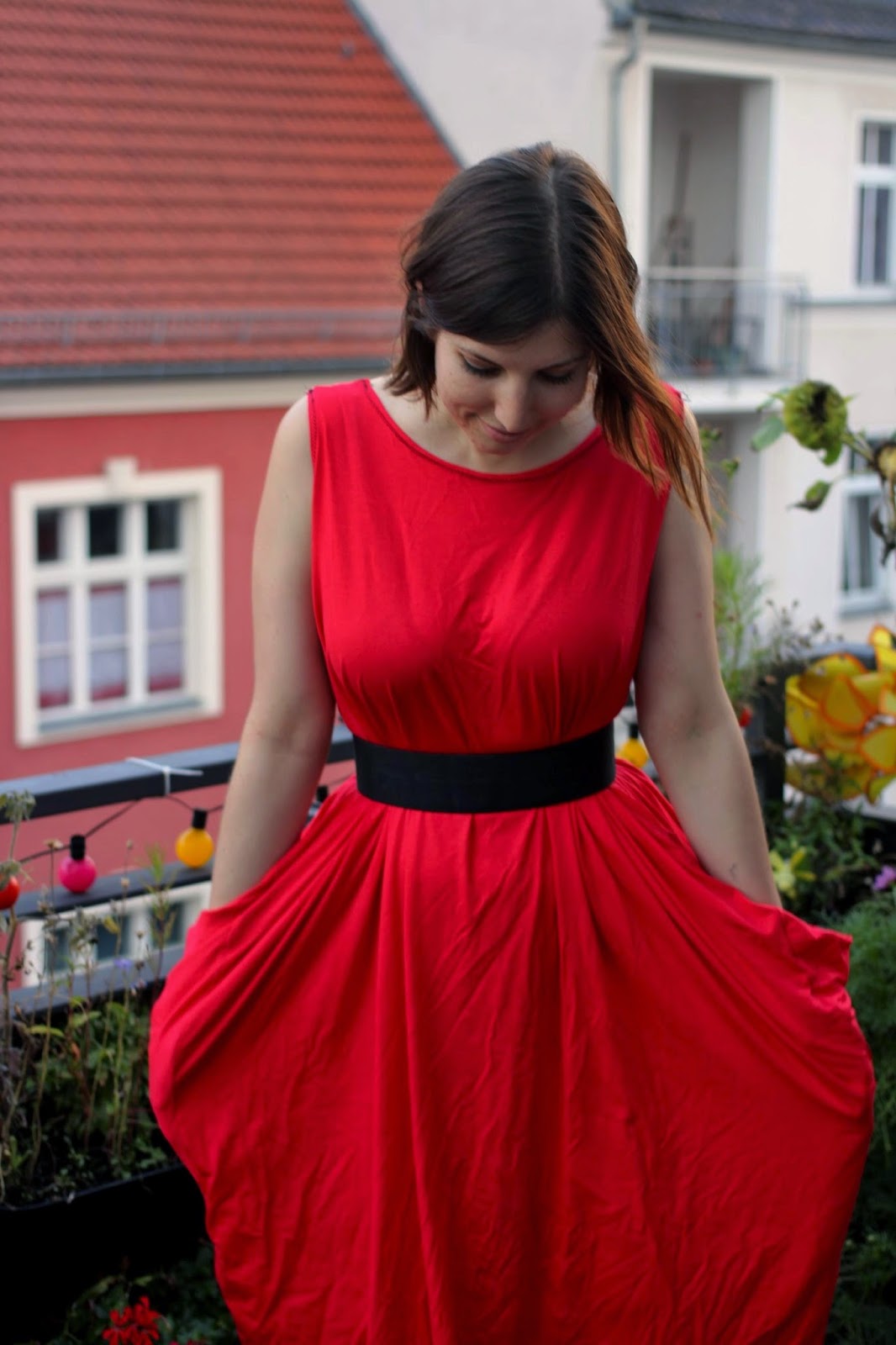 And as far as basic goes- I have to say that this was unbelievably simple from the start to the end. I bought the pattern online, and was able to instantly download the pdf, which could be printed and readily assembled into a usable pattern. The dress comes as a ‘one size fits most’ so there was no need for adaptation or size-choosing. Apart from hemming, the whole thing really only involves four actual sewing steps, and there is a youtube video (warning- very strong Aussie accent) by the creative team that you can follow along if you’re feeling lost. 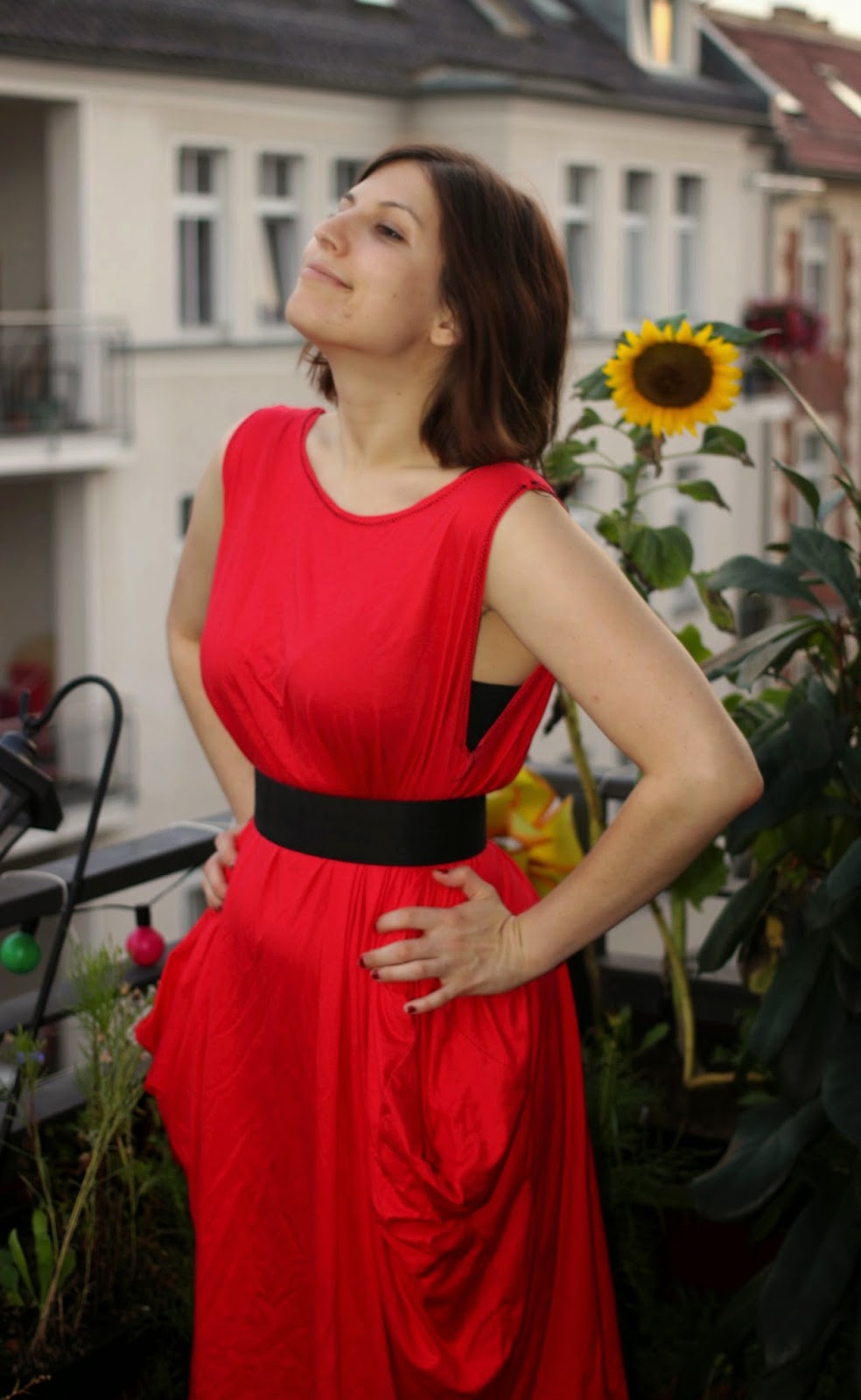 The only real problem I had was fitting the longer parts of the pattern onto the material I chose… and I have to comment that this sucker does use quite a lot of material!

In my case, I’m using some really cheap (both in cost-2 euro/m- and, unfortunately, quality) stretchy material that I found at the Maybachufer Markets a couple of weeks ago. It came complete with a weird design, which I can only describe as ‘super 90s’. 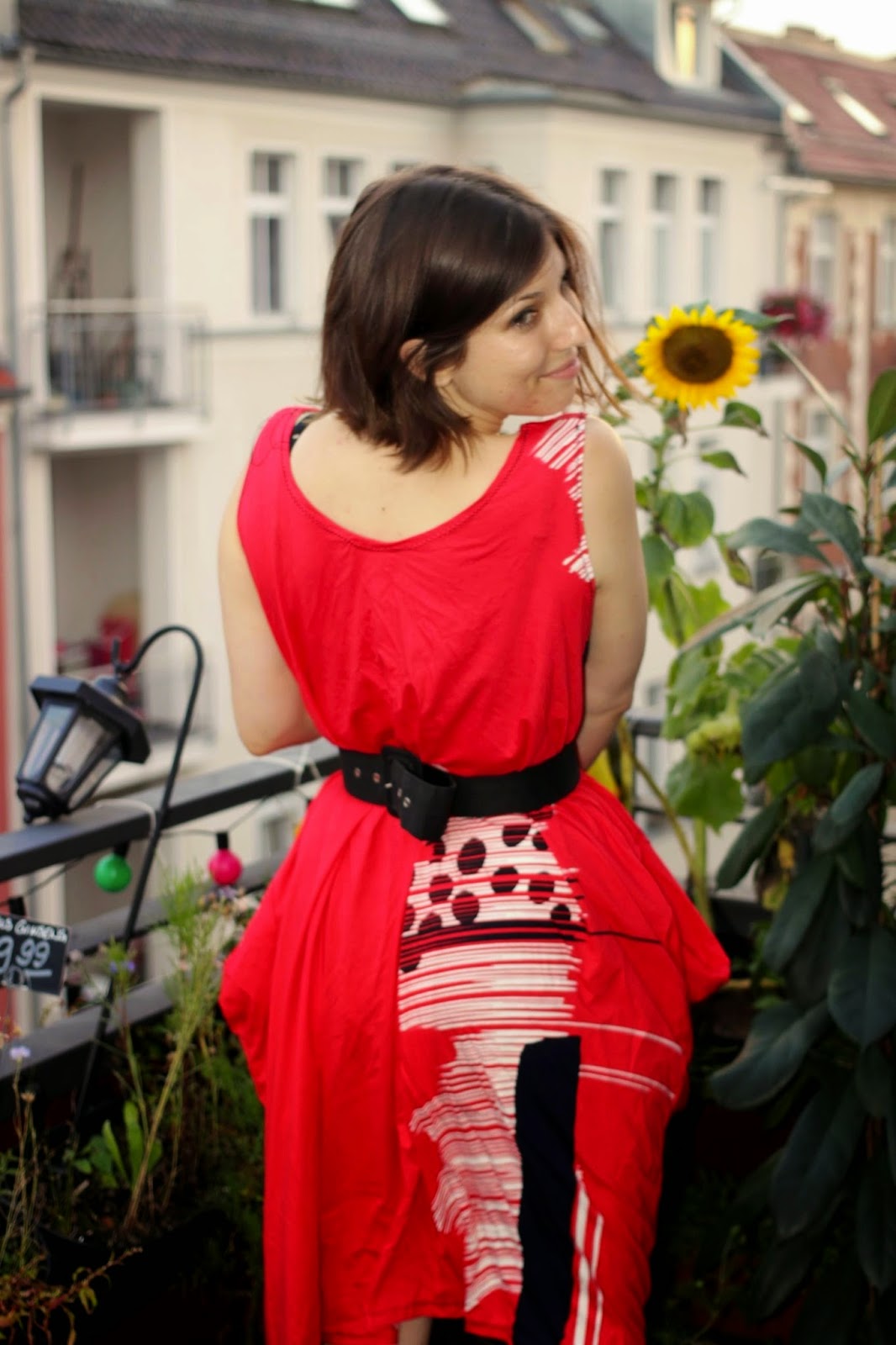 But I kinda like it. The dress is of course reversible, with a slightly lower neckline on the ‘funky’ side.

These photos are all wearing the dress ‘the best’ way (my favourite)- which not only suits my body type the most, but also produces super awesome pockets!! 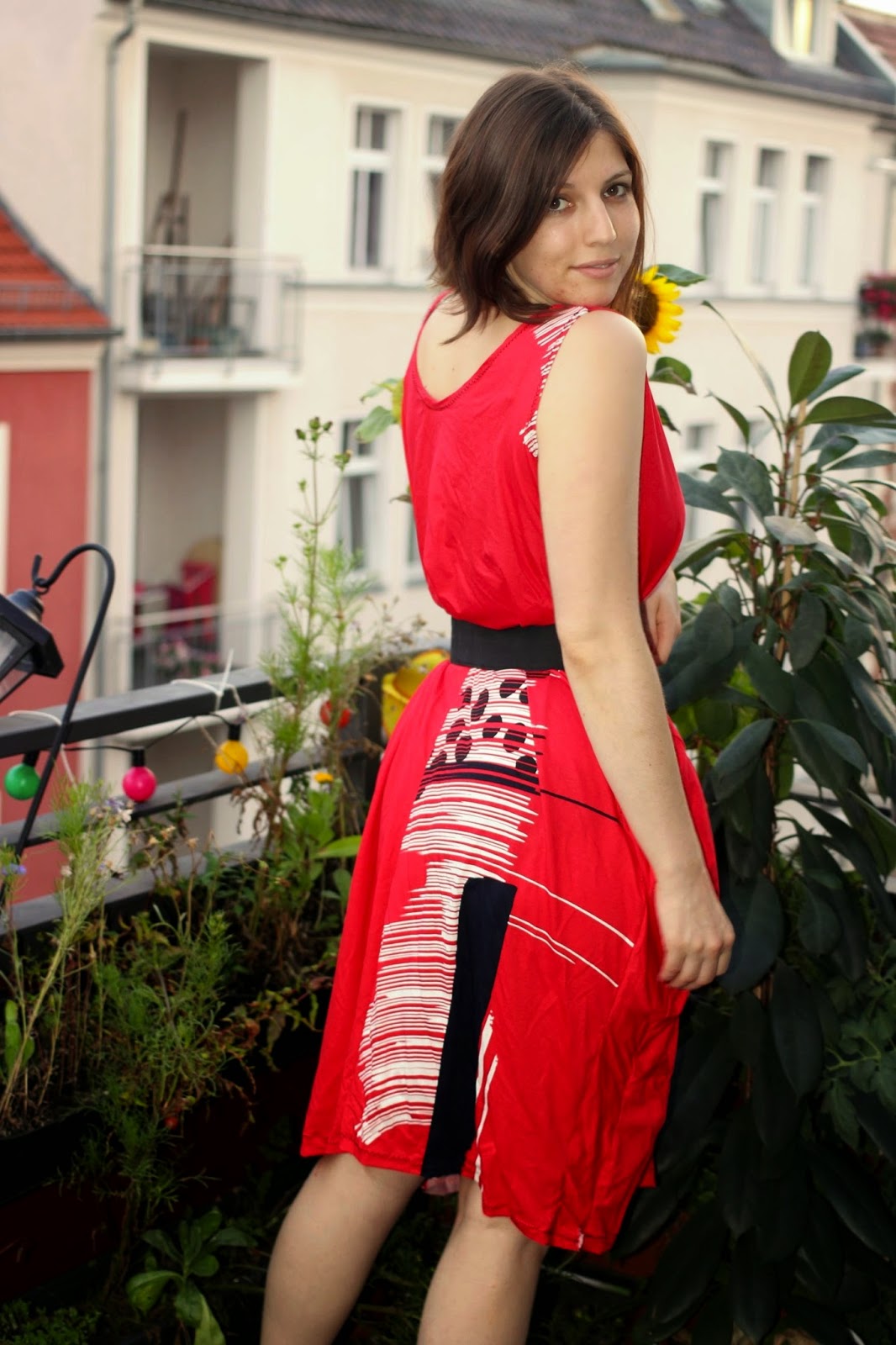 It being a ‘wrap dress’ and all- it can also be wrapped: 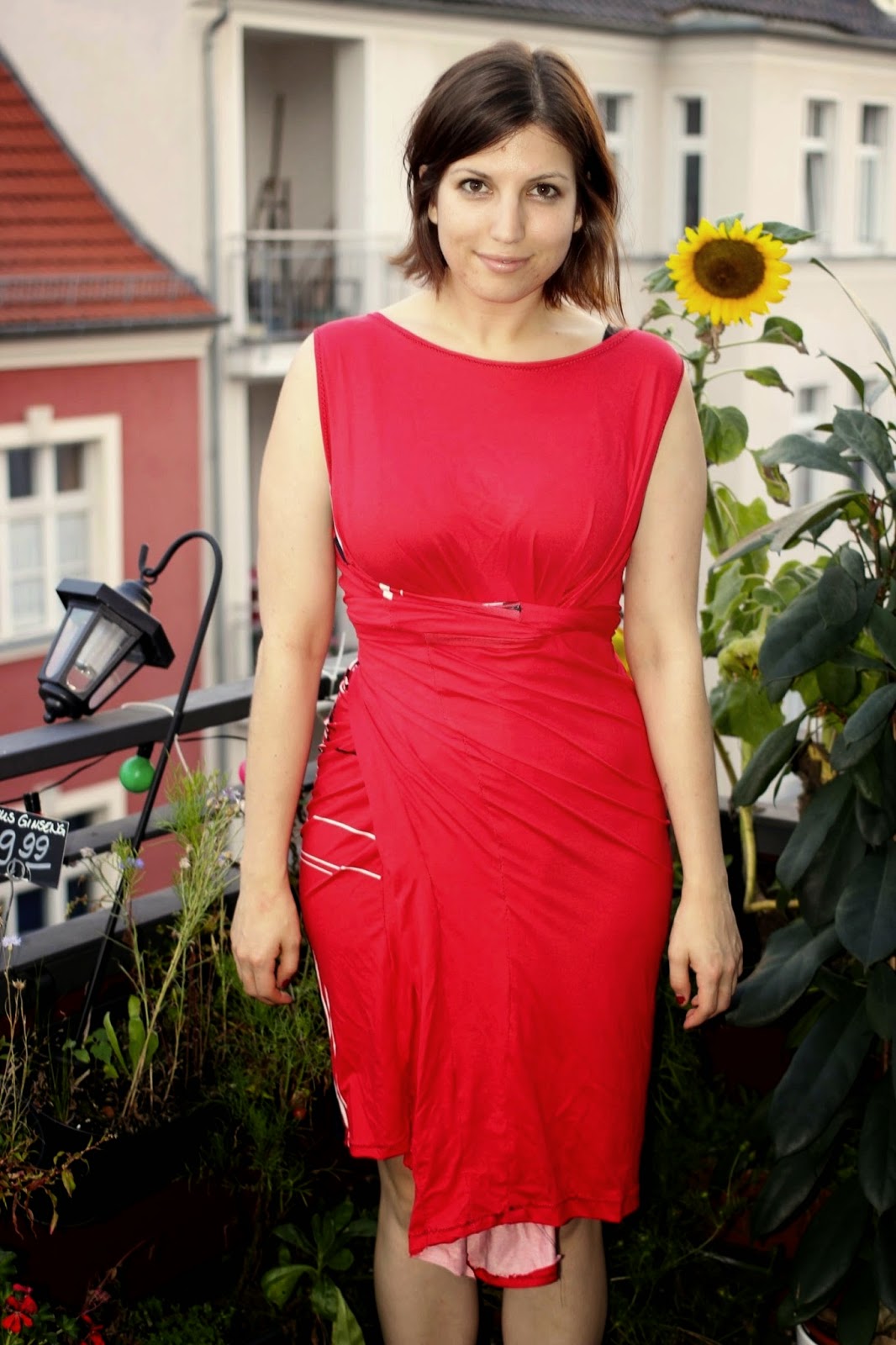 Although, to be honest, I really am not so into this style. The wrapping gathers the bulk of the dress material at the front waist and stomach- which is pretty unflattering from all angles- and results in a thicker, as opposed to accentuated waist.

Part of this, at least, is due to my choice of material- with a high quality lycra, as is suggested by the folks at TeachMeFashion, I guess there would be less bulk, and more chance for artful arranging of folds. I wonder though whether in this case you could scale the dress in a bit at the sides.

The lycra would also overcome the second problem- that of the visible underside of fabric at the hemline visible above- and a heavy lycra would be a bit smoother on the curves than my flimsy market material. 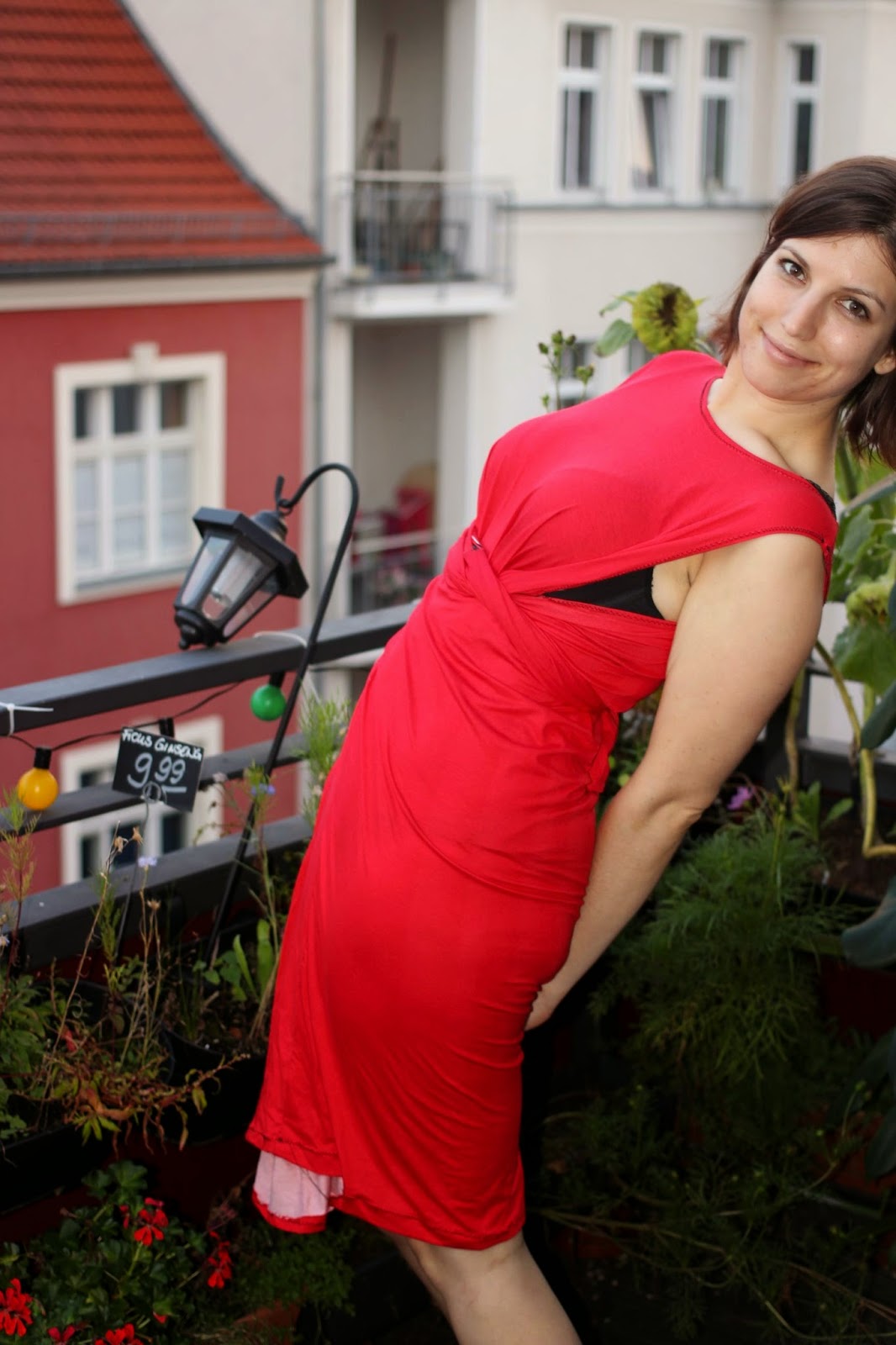 And here is version three, on the reversed dress.. 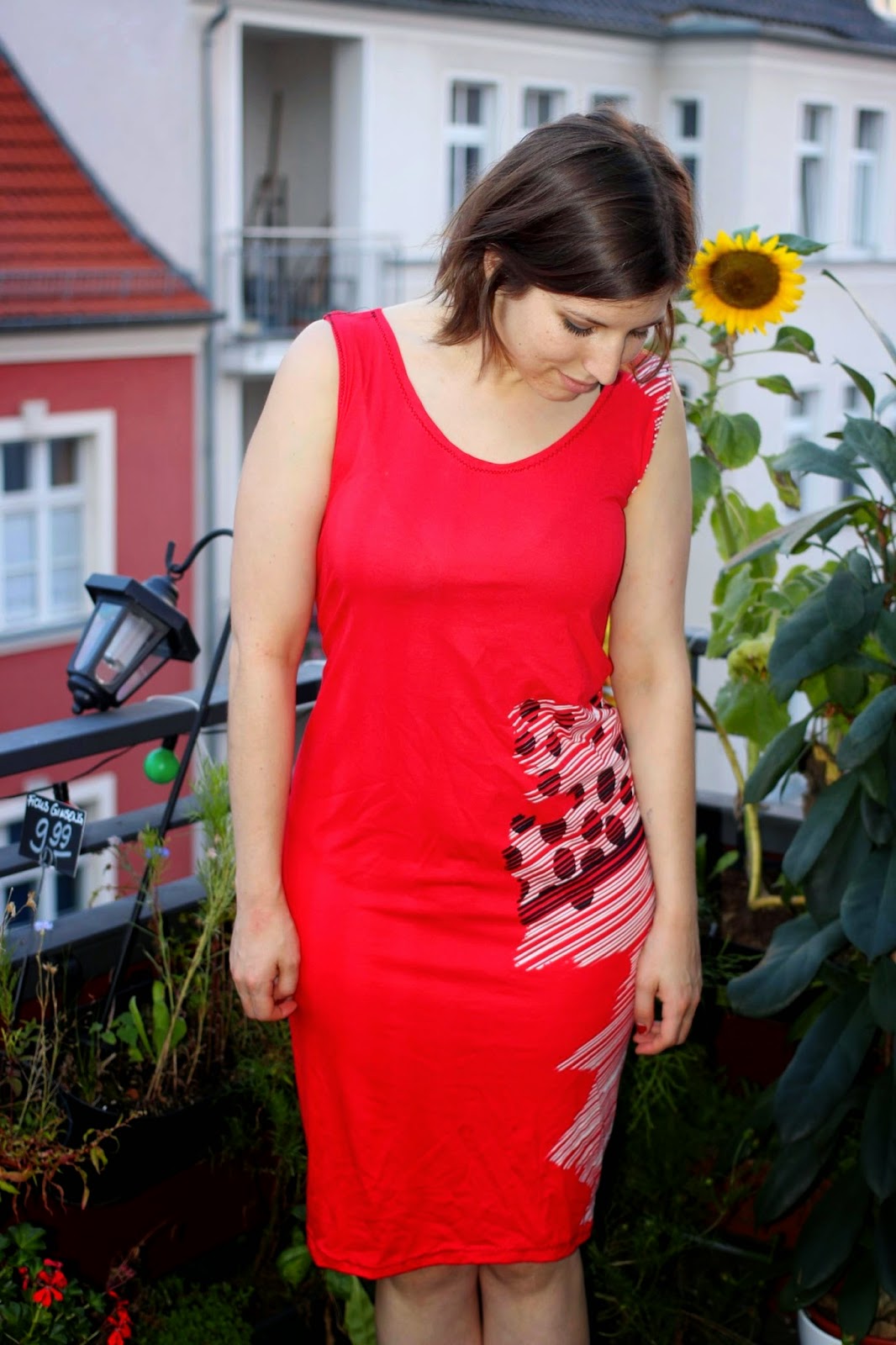 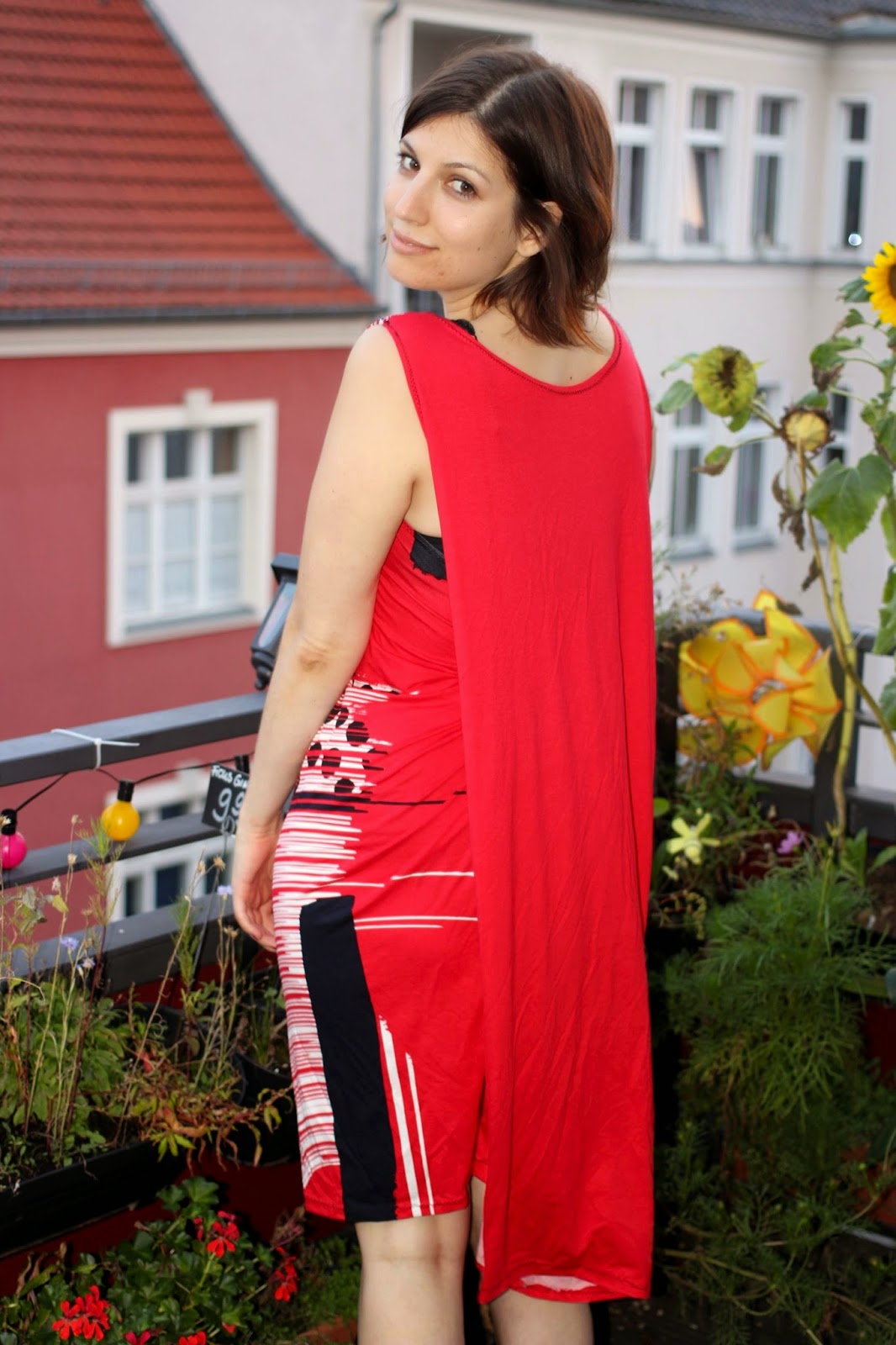 This I kind of love.. it’s so darn dramatic! 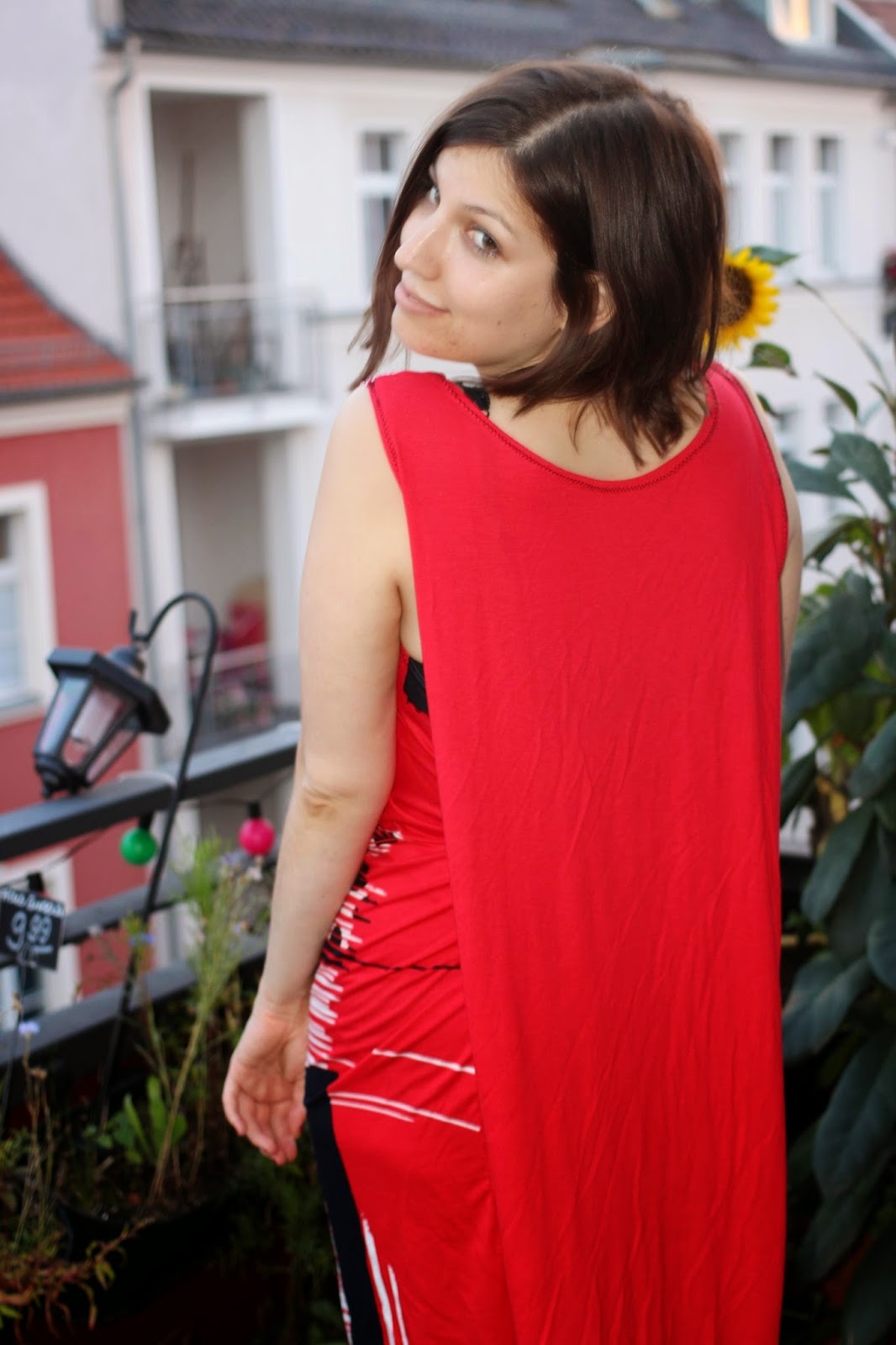 In the end, I love the concept of this dress, and love how easy it was to make. I enjoy the funness of the pattern I ended up with, although I did a really great version online with a busy floral pattern that I kinda covet.

Ultimately, part of me suspects that this dress- especially in the wrap form- is only going to be great on a very slim build. To be honest, I tend to shy away from anything with stretchy fabric and a non-structured waist, and I’m actually curious to try something similar to this with a more designed top half using ‘real’ fabric in the future. 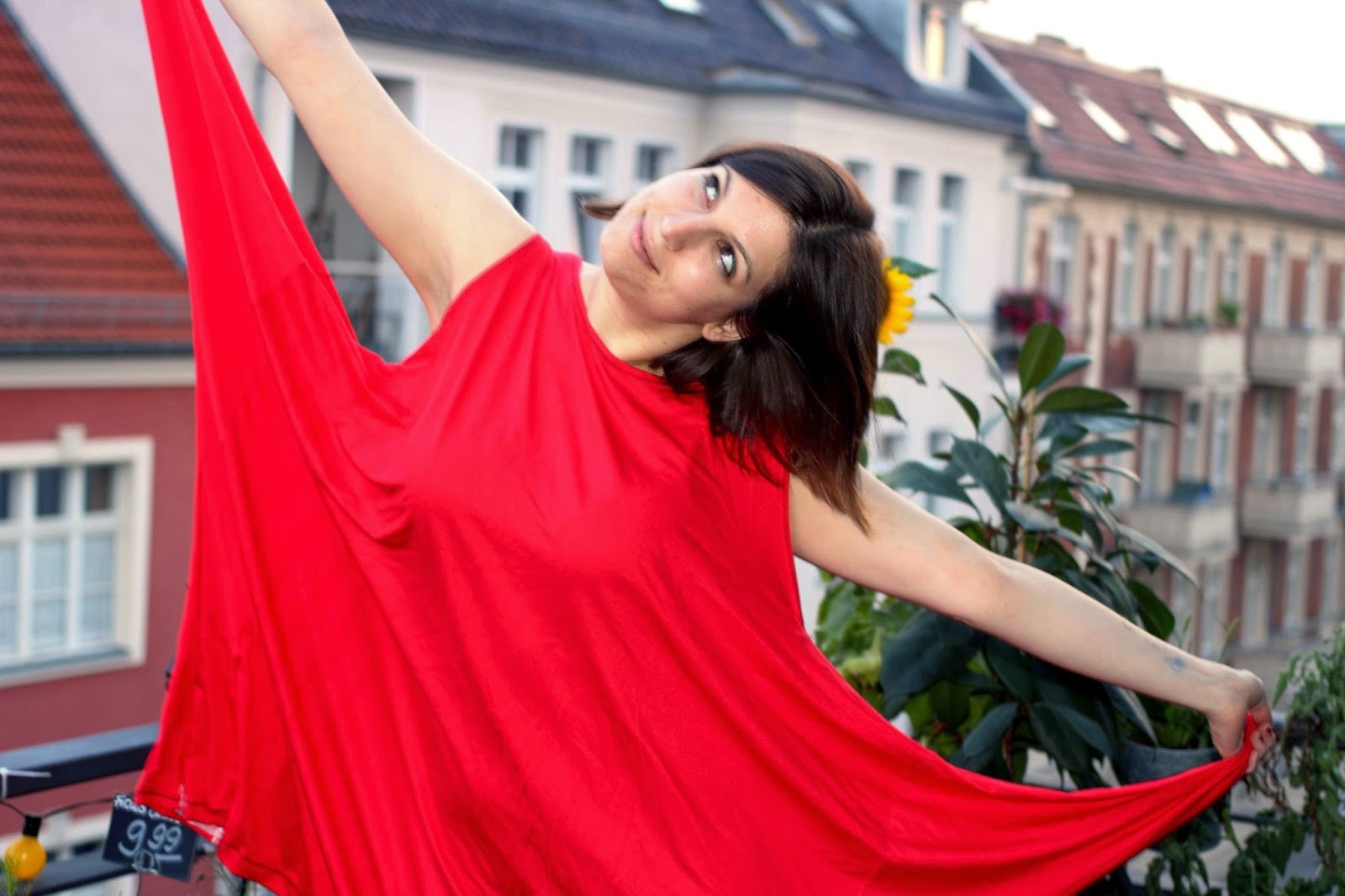