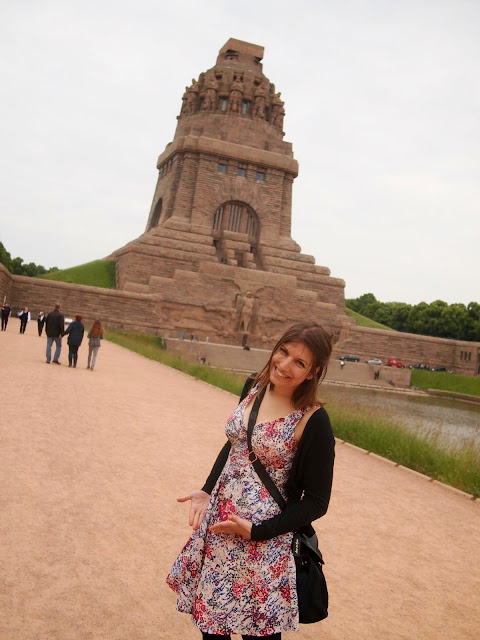 Andy has a strong desire to make me suffer through as many steps as he can possibly manage.
I truly suck at any kind of climbing. I like to blame the ‘One Lung’ situation- I huff and I puff and I look like a sweaty freak… but we all know that the truth is that I’m just insanely unfit. And my beloved seems to have some sort of secret wish to be a fitness guru, tricking me into climbing things whenever we go to any city.
He might just like it when I make this face. 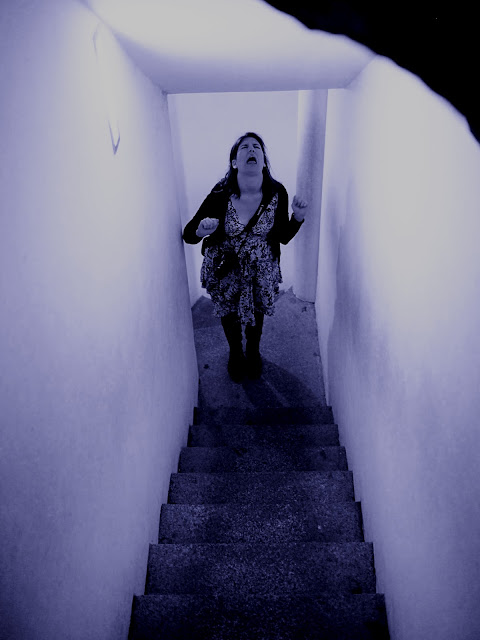 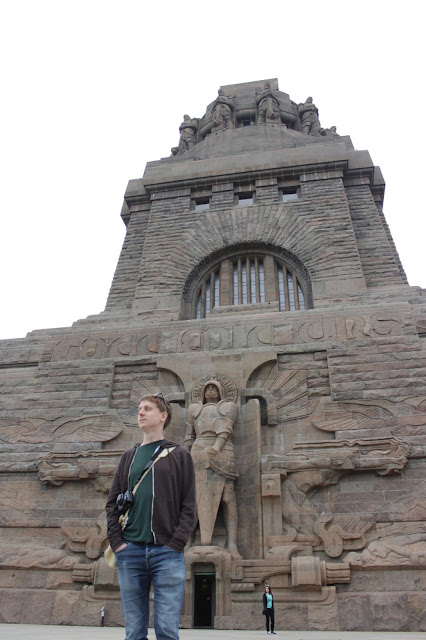 Meet, the Voelkerschlactdenkmal or the Monument to the Battle of the Nations. It’s 91 m tall, has over 500 steps, and Andy wouldn’t let me use the elevator.
Incidentally, the Denkmal (which is really more ‘Memorial’ than ‘Monument’ auf English I think), was built 100 years after, and in memory of, the 1813 Battle featured in our previously visited panometer. Turns out, that because Germany wasn’t really a thing yet (unity came later), many German-speaking people died on both sides of the fight.
Here’s the wiki link if you’re really into that sort of history. And if you’re more into some of the back story with super beautiful images, go here. 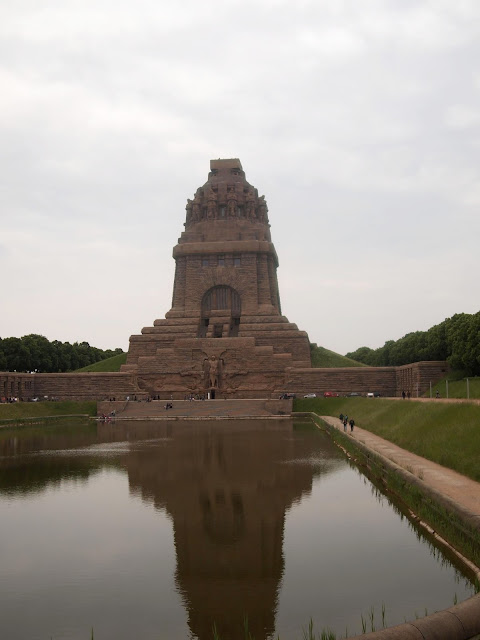 If you’re not into the history, the real reason for visiting is this: it’s totally decked out as some sort of Communist-meets-Lord-of-the-Rings man cave inside. 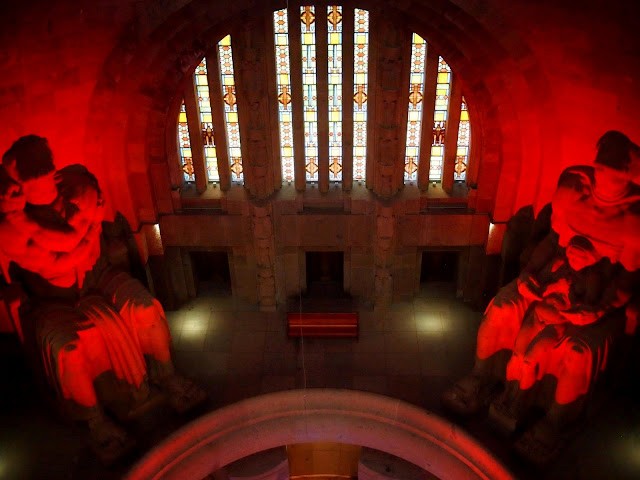 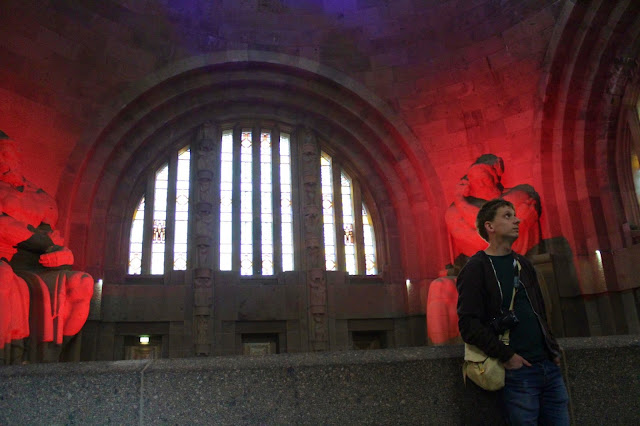 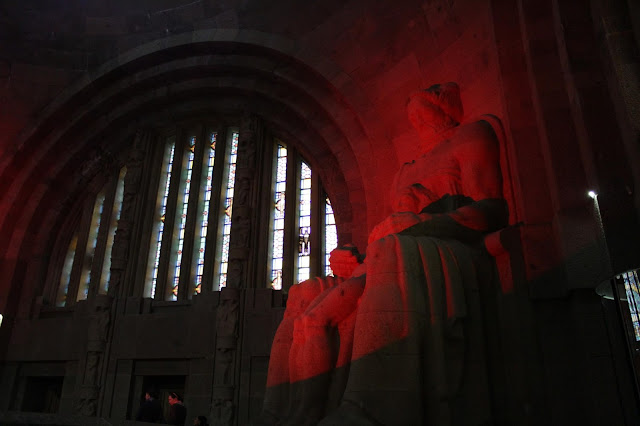 What was even cooler? While we were there, there was a band in the foyer doing sound check for the WGT event later in the evening.

And they were actually playing the soundtrack from Lord of the Rings!! 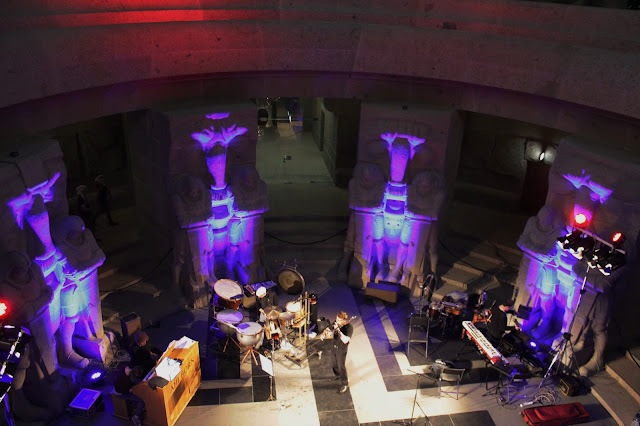 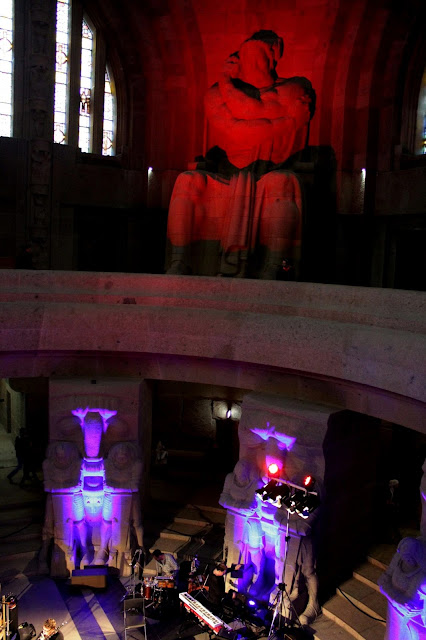 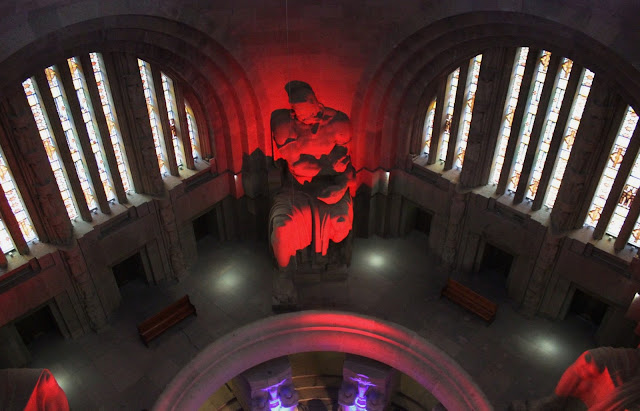 Let’s pretend that this guy is trying to provide you with a sense of perspective, and not just being a weird little man eh? 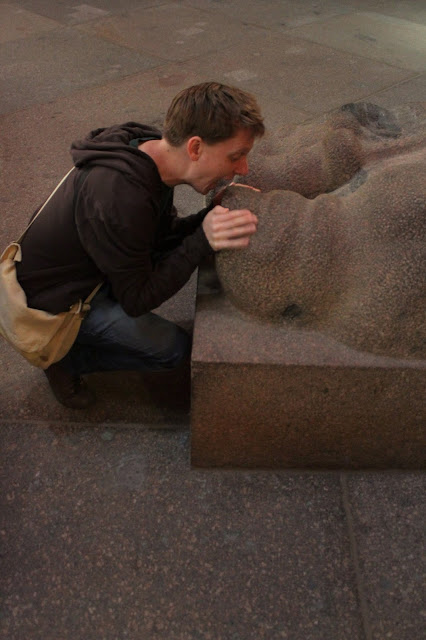 So we climbed up some stairs, and there was a pretty nice view to be had. 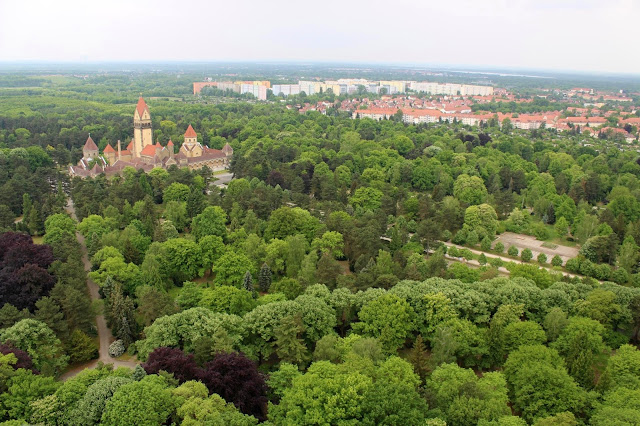 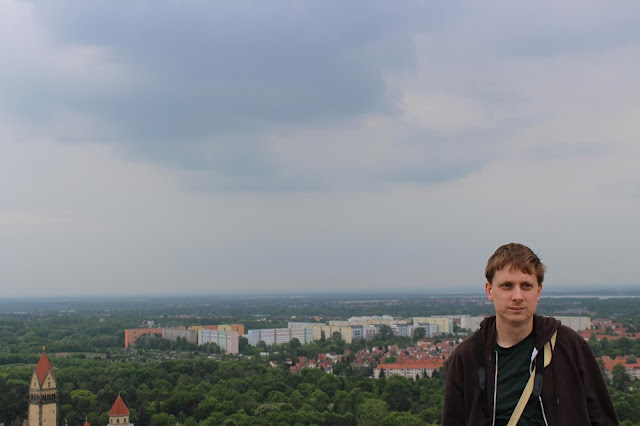 But apparently there was more climbing to do. 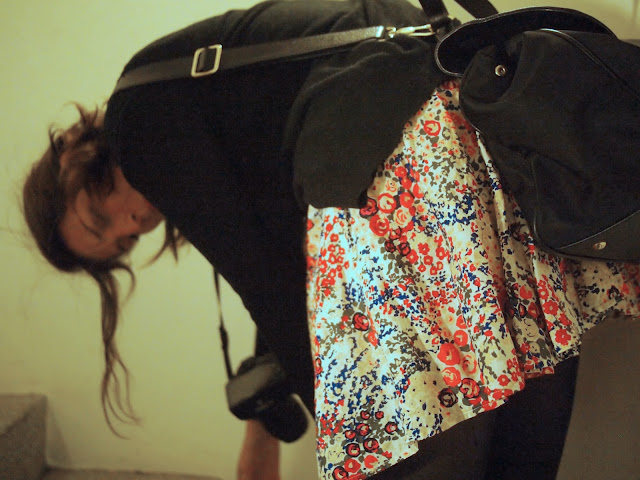 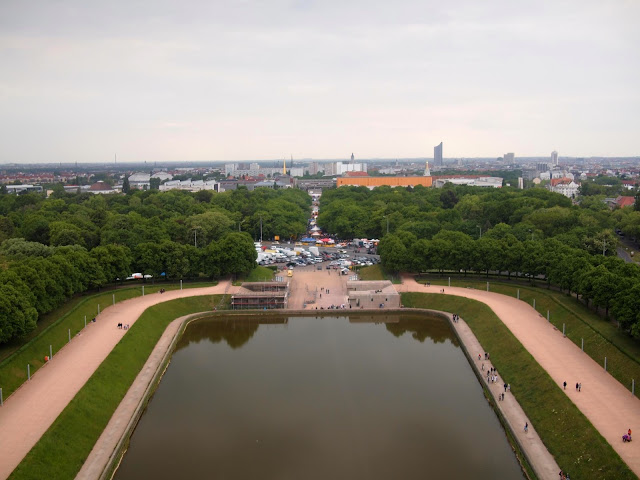 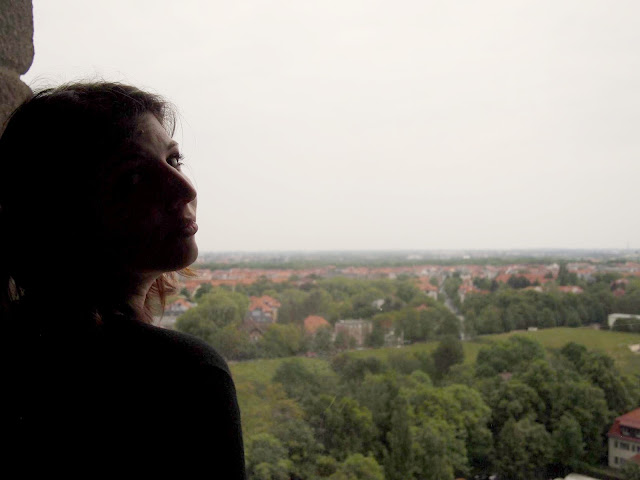 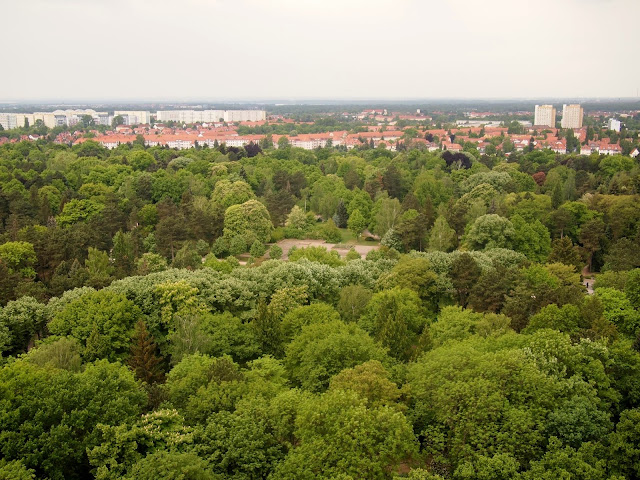 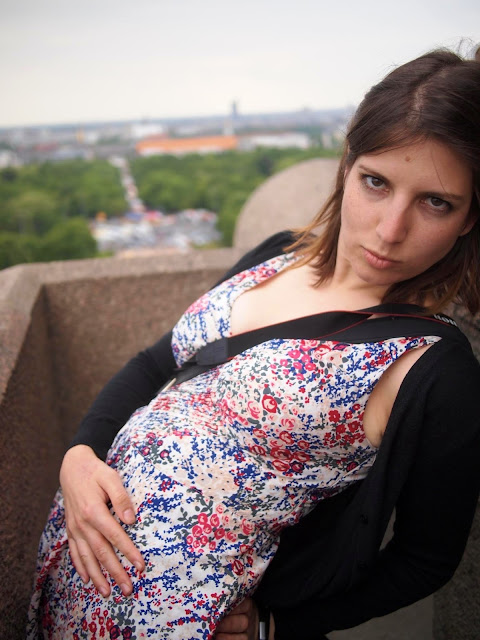 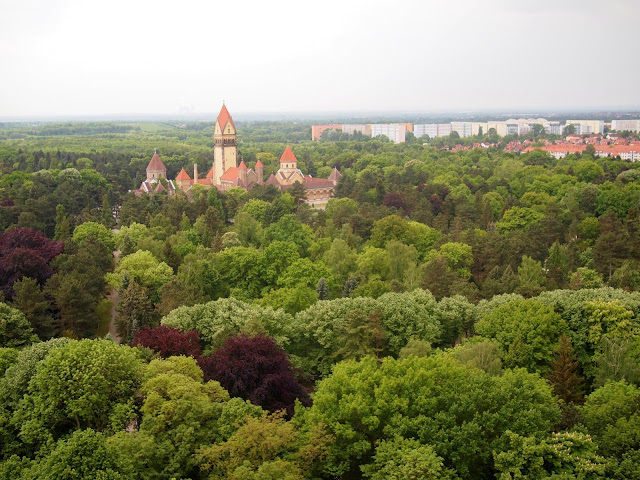 We still weren’t at the top! I tried to hide, so there wouldn’t be more steps. But Andy found me, and forced me ever upwards!
Finally!
The last section of steps is quite disgustingly claustrophobic. Narrow, winding, low roof. No air, not much light.
But as always with tall things, the view is pretty cool from the top (although not convincingly different from the view from ‘nearly the top’, so I’m not going to add photos here).
And we were the only ones up there! 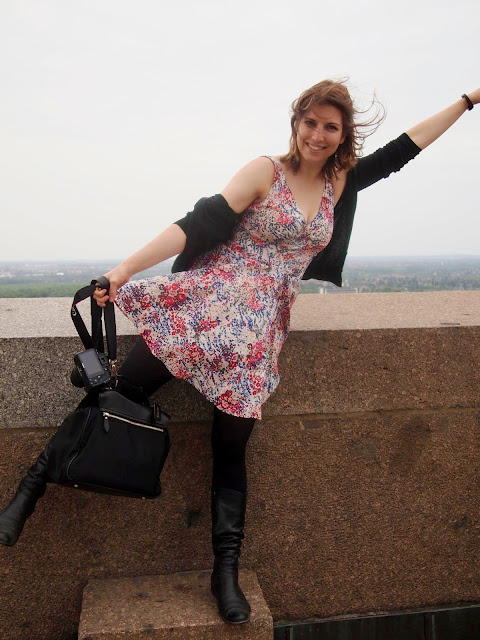 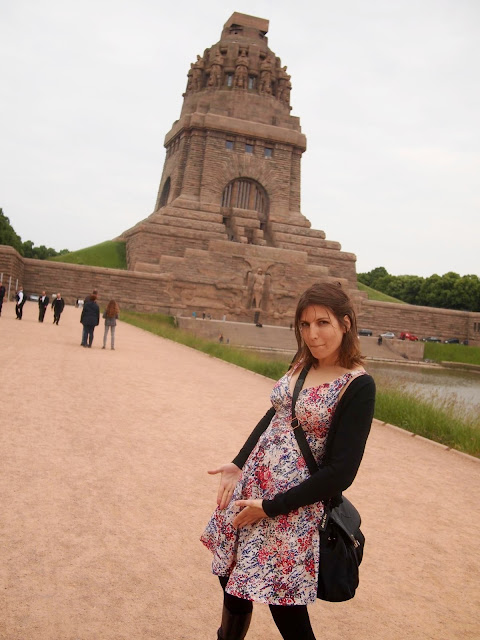 I think entrance to the Denkmal costs 8 euros- but we were given a ticket by some folks as they left (the tickets apparently last the whole day?).  Possibly not on the very supportive side. Sorry Denkmal.