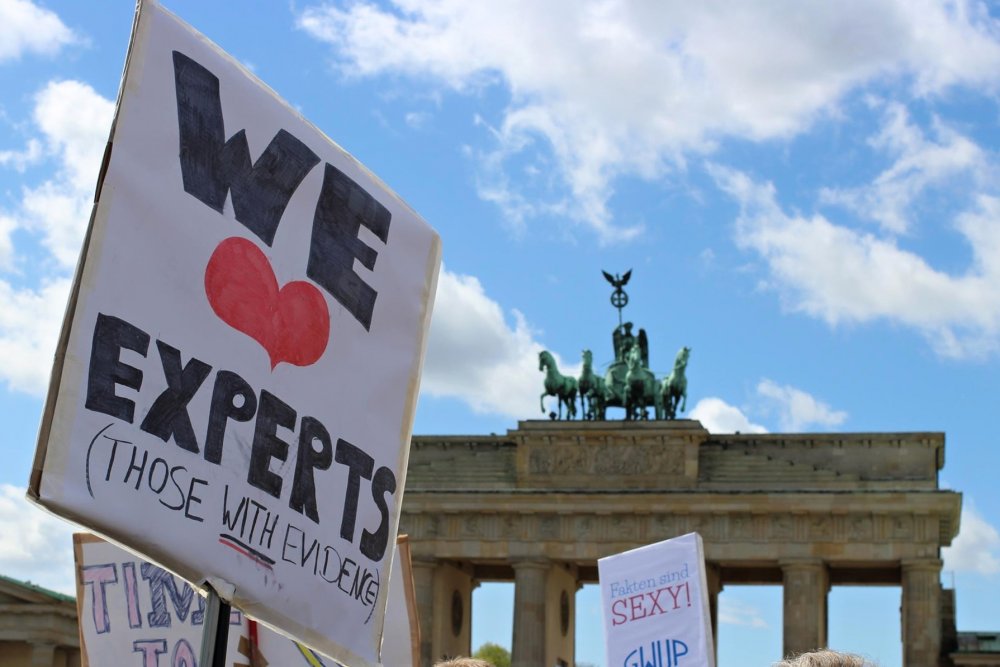 On the 21st April, I defended my Phd in Molecular Plant Physiology. On the 22nd- Earth Day 2017- we marched for science.

I have to admit, my participation in marches and protests up until now has been dismal. Non-existent. But Andy and I have been talking a lot about actively engaging in and supporting the things we believe in.

For me, I think part of this comes from being an outsider in another country. Seeing the differences in law and culture helps you question why things are they way they are, and makes the state of the world seem like less of an inevitability, and more of a choice.

Maybe we’re both just going through some sort of 1/3rd-life-crisis. Anyway, Andy actually joined the organising committee. Check out his oh-so-pro ‘Ordner’ armband in the photo above. So he spent the weeks up until the march meeting people and pasting posters across the city.

I’ll let him take it from here:

“The March for Science happened all round the world in more than 600 cities. That’s on every continent, I’m pretty sure I saw some photos from Antartica. But we were in Berlin so we thought it would make the most sense to march there. I got involved in organising because after last year I became worried that reactionary forces are becoming ascendant, the void looked back. It’s important for grassroots movements to mobilise before we slide further into the abyss. The march is for science, evidence based policy and action on climate change. Because science is such a useful tool it can work its way into every aspect of our lives. And it can’t be apolitical because then we’re just walking around saying ‘truth please’. We need to materially affect peoples lives for the better, otherwise, what’s the point of it all. At least that’s my humble opinion.”

In case you had some problems taking your eyes off the abyss, the take home is this:

Science is reality. Separating any aspect of the world from science is to separate it, and yourself, from reality.

Given the current political climate, it probably won’t surprise you to hear that a lot of people rocked up with the Neil Degrasse Tyson quote: Andy spent the early morning setting up for the talks, then he and I met early at the Humboldt University, where it all started.

I was pretty nervous at first, the number of organisers greatly outweighed other participants, and I was worried that the whole thing would be a bust.

And in the end I, a scientist, couldn’t even convince my parents, also scientists, to come to the march.

But Berlin came through. We spent about half an hour listening to talks, and then left the courtyard in the direction of Brandenburger Tor.

The police guarding the event estimated that about 11,000 people turned up to walk the stretch. One of the plans of the march was to support the concept of science as not only a thing for the ivory tower academics. To that end, every scientist was supposed to bring two non-scientists to march with them. I was pretty pleased that my cousin Ashleigh and her husband joined us in the march, and was proudly counting them as my ‘plus two’, until Ash pointed out to me that she and Justin actually are scientists (medical and engineering).

I guess given that another of the ‘calls to battle’ was a demand for greater solidarity between scientists from different fields, I’ll let it go as a general win. Guys, I probably don’t have to convince you that Science is Awesome.

But just in case, let’s do the convincing by playing the ‘would I be alive’ game?

It comes up pretty often at work. Because this is how nerds have fun.

The simple question is- how long would you have survived without today’s science? Let’s just put back the clock 200 years. And we’ll ignore all the obvious stuff. We can pretend that we had sanitation, that we had nutrition, that we could avoid most of those ‘little things’ that rush in and demand tribute in the form of a percentage of our children. (See anti-vaxxers, I DO try to take your stupid perspective about the world).

If it’s just you and your shitty little genes and crappy little lifestyle.

I’m fairly sure I would have survived the broken arm at age 4. I like to believe that the partial colour blindness I inherited from my father still puts me in front of those bespectacled geeks at work, and that the thallassemia from my mother is mostly just a problem to pass down to the next generation.

At which point, the pleurisy and pneumonia wouldn’t have been held at bay (penicillin was only discovered in 1928) long enough for the doctors to look inside my lung (CT scan: 1970s) and realise that the whole thing had to go (pneumonectomy: 1895+).

(Made it out alive? Good for you, you plucky thing you! Try playing again with the lives of your loved ones to see if they fared just as well!) The reality is that, thanks to science, and scientific progress, for all of us in the first world things have never been better. Sure, we can’t yet cure cancer, prevent Alzheimer’s, feed the world, live for ever. These are known unknowns. And there’s undoubtedly a lot of other things out there, things that we don’t yet know to search for. Unknown unknowns. But, given that we actually get funding, we’ll gain more and more knowledge every day.

But do you know what I want more than the knowlege?

I want us to actually use the knowledge that we have.

Because if not guys, we might just be a little bit F***ed. Because Global Warming is Real. Alternative Facts are Lies. Vaccines save lives. And arsenic is completely natural (but will kill you anyway).

And because we don’t have a Plan(et) B: