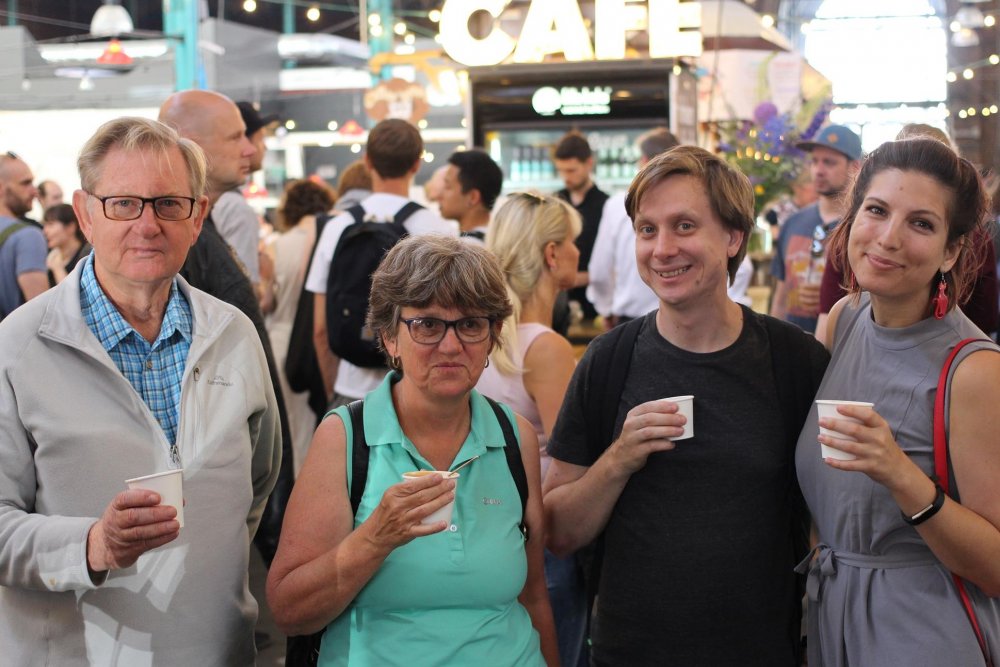 If you’ve lived in Berlin or even just visited briefly, you know all about Markthalle Neun. During the week and on Saturdays they sell ready-to-eat delicacies and regional produce. On Thursday evenings they have street food, and once a month or so they have themed Breakfast Markets.

This weekend, the theme was Japanese. The market hall gets super busy, and all the good stuff has queues. So the rules are these:

Go with a group.

Try all the things.

Leave one of your party as the reserver of seats.

We arrived shortly after 10 to find a cooking class already well underway, and most of the stalls in the late stages of set up.

We drank some coffee to fuel our foraging, made a lap to survey the options, and settled in for a morning of tasty treats. Andy’s dad was the first to win the scavenger hunt, coming back with a Japanese-style nori taco. Meanwhile, Andy’s mum was in the line for Takoyaki.

I’ve mentioned this before, but Japanese is up there as some of the food I miss most in Berlin (ok, along with pretty much all Asian foodstuffs). Sushi is omnipresent here, but usually not very good, and the bento boxes that my sister, mum and I would treat ourselves to on lazy weekends are nearly impossible to find. And Takoyaki? Those delightful gooey dough balls filled with an octopus treat.

I’m ashamed that I didn’t spend every waking hour while back in Perth ‘eating my way through Asia’. We made some effort (especially in Melbs, thanks mainly to my BFF Ash and her hubby), and under the Japanese banner I did manage a bento box and Kahmon and some takoyaki at the Fremantle markets.

When I last had takoyaki in Berlin, they were served without bonito flakes, without mayo, and with tiny bits of octopus inside that I can only assume were processed for visualisation by electron microscopy.

My heart was pretty firmly broken by the bad Japa-German (Jermanese?), and I vowed to never be taken a fool and tricked into eating takoyaki again in Berlin. ^This photo is blurry because of the speed at which I was shoving the takoyaki into my mouth. And a good thing too! Because these guys were delicious. To the point where I’m seriously wondering, now, three hours later and back at home, why I didn’t go up for seconds.

After the octopussy goodness, I struck out again with my eye on okonomiyaki. While I waited in line, Andy’s folks brought in some rather tasty noodles and dumplings. I arrived back at camp with Okonomiyaki, slightly regretting my choice to get the bacon variety. I expected something like this and came back with something a little more German-y in its looks. The Japanese curry was disappointing. Japanese curry is is another one of my favourites. But I was lucky enough to be treated by multiple meals made by our family-friend’s Japanese Nana, and I think it’s spoiled me for the average stuff.

It’s hard to live up to Nana’s standards!

If fusion tastes like this, I’m willing to embrace fusion! Apart from that, were a few mochi options for dessert, but nothing that really caught our eye, so we finished off the meal with some decidedly un-asian Pastel de Nata. Oh yeah, and more coffee. Although I think you’ll agree that at least one of our members looks plenty caffeinated! I know you think that all we do is eat and eat and eat, but I’ll have you know that the morning feed was followed by a stroll through the city in the sun.