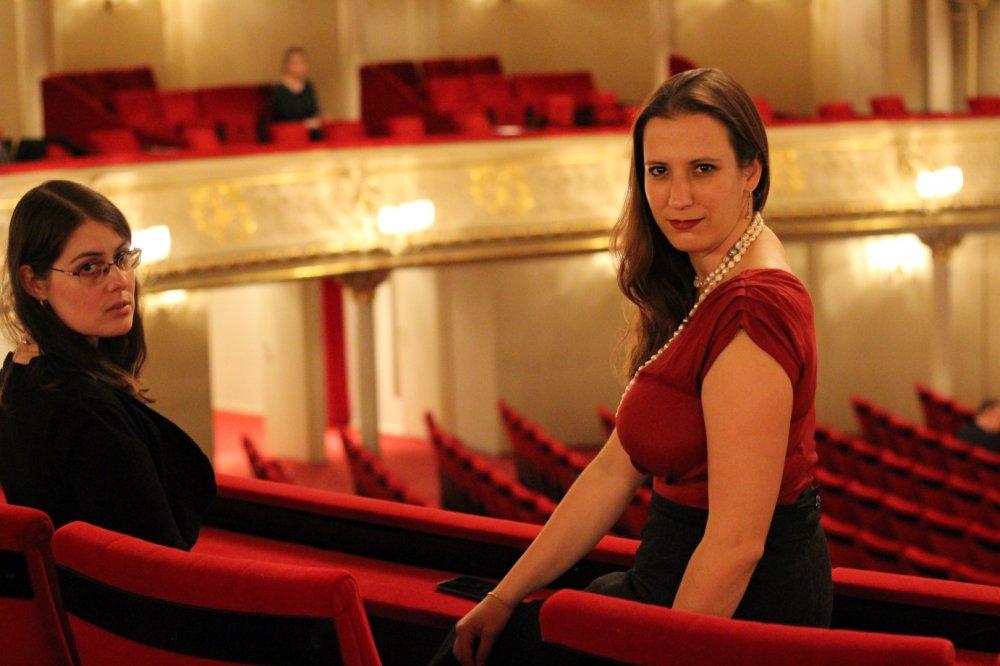 When Ariel (a.k.a Ella) decided to visit Berlin, her ‘to do’ list included, among other delights, a Night at the Opera. The thing you should know about my sister, is that she is just way more cultured than I am. The thing that you should know about me, is that I will take any opportunity to dress up in fancy clothes and prance.

To be completely honest, I’ve didn’t have any strong feelings about going to a particular Opera, and I clearly don’t have enough of an internal urge to see Opera to actually organise the viewing myself. However, give me a reason to swan about, and I’ll be there will bells on.

Or more accurately, with bows on. Ariel bought the red velvet dress for herself, from Etsy, only to realise that it did not quite meet her bust requirements. So she passed it on. In the end, we went to see two operas- both from Berlin’s Komische Oper. Wednesday was The Barber of Seville, Thursday was Eugene Onegin.

We went in knowing practically nothing about either opera. Eugene Onegin I had never even heard of, and the Barber of Seville we mostly knew only in the context of Bugs Bunny. The Barber of Seville was absolutely magnificent, and has left me with the strong opinion that I’m much more into the rom-coms than the dramas (I feel the same way about Shakespeare- Much Ado about Nothing FTW!).

The basic plot follows a young Count’s attempts to hook up with a young lass who is being kept in confinement by an old Doctor, who wants to marry her when she comes of age in order to take her dowry.

This version was set in the modern age, with a bit of a social media twist. Everything was rather spectacularly done, but my clear favourite was Figaro, the barber who helps the Count woo his woman. In addition to the actual Figaro, there were three ‘accessory Figaros’, one dopey, one suspicious with raised eyebrow, and one with a demonic grin, who would move in and out of scenes, sometimes helping in the action and sometimes acting more as stage hands.

By the way, if you are not familiar with the Figaro song, go and check it out now. It is impossible to be angry or sad if Figaro is playing!

Apart from the overall brilliance of the whole situation, I feel like it’s worth a mention that at one point both the Count and Figaro were running around the stage wearing dresses and heels, and that the first act ended with a hallucinogenic dream that looked suspiciously like Mardi Gras. Magical! As you can maybe tell from the photos, we booked one of the small boxes to the side of the stage. This did mean that we missed a couple of the stage-centre visuals. But it was entirely worth it to be so completely on top of the action. We grinned at the orchestra, made eyes at the actors as they waltzed below us, and nearly got climbed onto when the young lovers attempted to leave the locked house of Rosina’s tyrant father in one of the later acts.

Posh to the max!

Which, well… if you want the antidote… here are a couple more shots of us really taking advantage of the ‘selfie’ spin of the opera: On Thursday evening we swapped outfits, and grabbed my friend Gemma, who was also visiting from Australia. Eugene Onegin was a little less thrilling than The Barber.

Despite being called Eugene Onegin, the opera is actually entirely about Tanya, a young hopeless romantic. Eugene just happens to be the object of her affection. Overall, the play was a little too angsty for us (the teenaged type, not the sexy broody BBC drama kind), although the regality and rejection coming from Tanya in the third act was able to make up for this at least in part.

Having said that, our Tanya was magnificent, and sang her heart out for nearly the entire 2 1/2 hours. On top of this, the set was absolutely beautiful- a grassy clearing in a forest with stunning lighting and effects (and ‘real’ rain at the end of the third act), and the costumes were divine candy-coloured pieces of perfection. Seriously- check it out!

Apart from the amazing visuals, Gem and I both spent a fair amount of time chuckling over the subtitles (Eugene is in Russian). Our particular favourite was when Eugene described one of the two girls: ‘Her face is round and rosy like the stupid moon in the stupid sky’.

I also decided that the two sisters in the play could be Ariel and I, although I think this might not have been entirely to Ariel’s pleasure. The opening scene had Tanya quietly reading in a corner and emoting hard (very Ariel), while Olga rolled around on the grass, laughed maniacally and generally ran around like a child. Just as I whispered across to Ariel that I might be the hyperactive Olga and she might be Tanya, Olga ran up to Tanya and, to get her attention, lay down on top of her.

Very much a move I am familiar with. Very pleasing. Anyway. The plot goes like this. Tanya falls immediately for Eugene (based on what he seemed to be saying, she is really turned on by small talk), and writes him a very long letter about her passion. He turns her down in what looks to be a fairly decent way- he tells her that he’s not keen and mentions that other men might not be so nice to her if she keeps stalking them. She mopes for a bit. There is some ball where he flirts with Olga, who apparently belongs to his best friend, due to the fact that he is annoyed that the party the friend invited him to is boring (he may be a bit of a psychopath). The friend gets irritated, overreacts because he is a man, and they go into the forest to shoot each other. Eugene wins, but feels pretty crappy about killing his BFF.

Five years later he finishes moping about the whole murder thing, and comes back to the city, only to find Tanya is HOTTTT (and also married). He realises that small talk also turns him on (again, based on the fact that he was totally into her after three minute song where they basically sing ‘the weather is nice this time of year’ eight times or something), and decides that it’s his turn to stalk her. She makes out with him in the rain, and then hard rejects him and goes back to her lovely-voiced but kinda-ugly husband. That’s it for the opera. Thanks to Ariel for organising, and to the lovely Gem for visiting and joining us in our frolics!