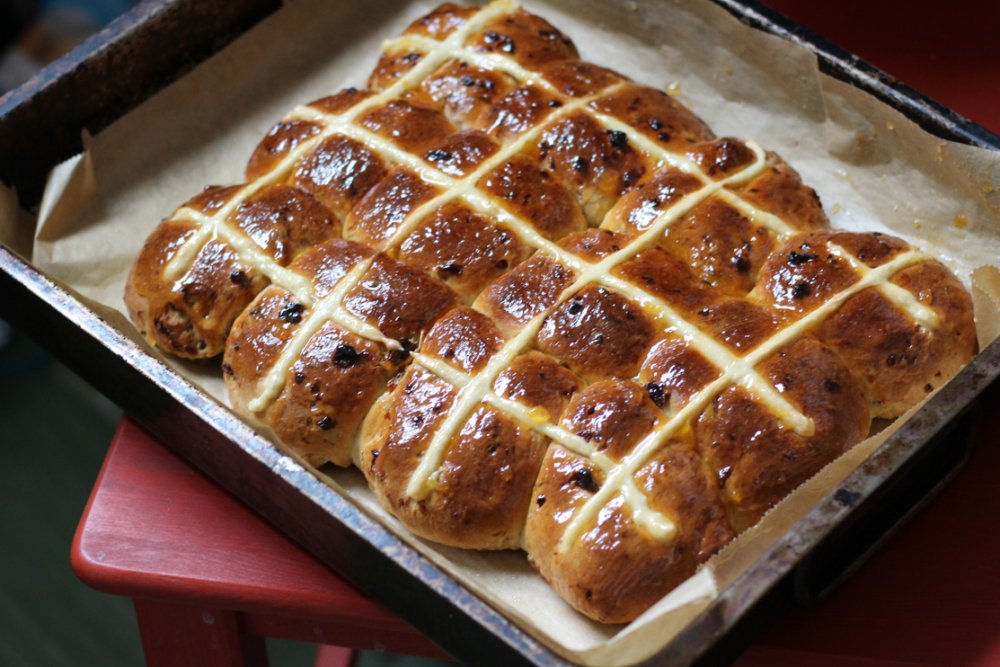 Just wanted to shoot off a quick post to say: Happy Easter Everyone. Or, ‘Happy Long-Weekend’ if you’re not so into the associated religion. I’m definitely in the latter category, but I’m at least a cultural Easter-celebrator, if that’s a thing. Although Easter has never really had the same significance as Christmas to me, there was a period of childhood when the holiday was ‘a thing’, a thing that was defined by a whole lot of food and a whole lot of family.

My mum’s extended family- cousins and aunts and uncles- would gather to gossip and eat. The kids- my sister and cousins and our first cousins once removed (or is that second cousins?)- would play king-of-the-pack in the park, four-square around the hills hoist washing line, and then scream and crowd around when the bombolotti (hot little fried dough balls with icing and a sugar syrup) were served.

Although I’ve worked out the Kahk, cornetti and ghorraehba that are also associated with our family’s holiday traditions, I can rarely summon the energy to make them for the Easter break. And I never gave bombolotti a try (plus I suspect that anyone with my hand-eye coordination skills should not be allowed near a vat of boiling oil).

So you’ll have to forgive that, this year, I turned my back on the family traditions, took the easy way out, and made hot cross buns instead. I also cheated further, by using my Thermomix. And this pretty great recipe.

Add everything into the Thermomix. Knead it. Let it rise. Make little balls. Let it rise again. There’s something incredibly satisfying about watching yeast doughs bubble away. It’s like a pet, but a pet that you can eat.

This last month has been pretty rough, and on Saturday, Andy moved his stuff to his new flat.

There’s an extremely laboured metaphor in there about Easter and spring and new starts. I’ll let you get there by yourself, eh?

Anyway, to sidebar a bit away from the baking, the whole situation has sucked, but has had two very important silver linings.

Firstly, it’s reaffirmed to me how awesome Andy is. Although we’re not staying together, there’s something incredibly pleasing that comes from the realisation that I didn’t make a terrible life choice in being with him. I feel insanely lucky that I can move on feeling like the last seven of years of my life were a general success. Andy helped me be a better person, and, for the most part, we had great times.

Secondly, the break-up helped me see clearly that we’ve managed to make ourselves a family over here, and a great one at that.  Our friends rallied behind us both, offered their homes and their ears, and generally let us hold on to them. I’m fairly uncomfortable with being so in need of other people for mental balance, and it’s made me feel pretty socially anxious. So having such amazing friends has made me feel incredibly loved, and forever grateful to them.

Anyway, let’s get back to the baking shall we? One the little balls of dough have ‘risen again’, you pipe on the flour dough, and shove them into the oven. Then glaze them, photograph them excessively, and shove them in your mouth with lots of butter and a little extra cinnamon. Hope you had a restful and love-ful long weekend everyone.