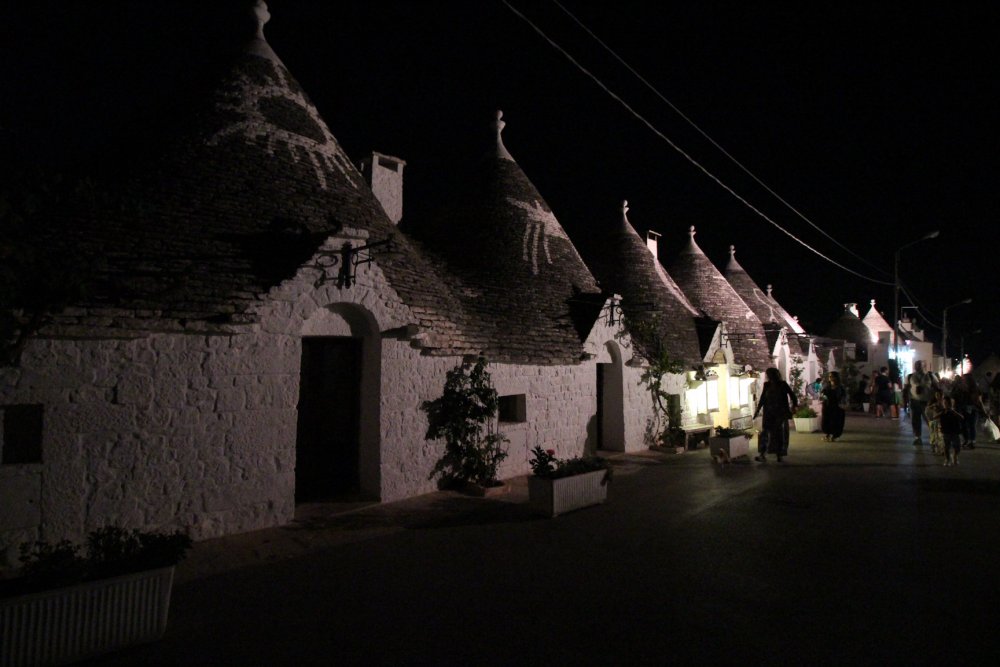 I was a bit worried that we wouldn’t make it to Alberobello in time to see the Trulli.

Chiara and Andrea, our hosts in Puglia, had mentioned visiting them on the way back from a day at the beach. But the day was lazy to the point where it was practically dark by the time we finished lunch and the mandatory coffee. And the Trulli were a bit out of the way for the homeward return.

Still, we made the effort, paid what I originally thought was an exorbitant amount of money to see what I assumed was ‘a house or two’, and walked in the direction of the Trulli.

Arriving just in time for dusk, and the beginning of the lights: The Trulli (singular, Trullo), are a group of UNESCO Heritage listed buildings. They were likely built some time before the 1700s, as unique structures designed, the stories say, specifically to avoid taxes.

By some accounts, the dry stone buildings, constructed without mortar, would be quickly dismantled when tax inspectors visited the area.

Other versions suggest that the shape of the structures themselves prevented taxation. Each Trulli has a cone shaped roof, ending in an opening. This opening, when covered with a single large stone, presented a fairly weather-tight structure. However, removal of the stone allowed classification of the Trulli as non-sealed or non-permanent abodes: a loophole in the housing taxes. Regardless of the reasons behind their structures, it’s clear that the Trulli have a rather special design, beautiful from both the outside and the inside: I will acknowledge that the things look relatively sturdy, and have clearly stood the test of time. Still, a small part of me does not entirely believe in engineering, and would be slightly unwilling to sleep under all of those stones, for fear that a pigeon would land on the roof in the night and the whole thing would collapse.

Nonetheless, a marvel to behold. Check us out being extremely ‘marvelled’: We spent some time wandering around the village, looking at all the houses. Some of the Trulli have whitewashed symbols painted on the cone (although wiki informs me that in many cases these have been added only in the late 20th centry).

Other Trulli chose to be flamboyant in different ways: Many of the Trulli have been converted into shops, which allowed me to spend an unhealthy amount of time wondering if I should by Trulli shaped pasta or bottles of alcohol. For those truly devoted Trulli fans, the town also boasts a Trulli church.

Not crazy impressive from the outside, but indeed boasting that typical conical roof shape that we’ve all come to know and love: So. That’s it from the Trulli, but I thought you should all like to know that the evening ended, as so many great evenings do, with both icecream and sweets.

These fellows are called pasticciotti, and consist of a fairly short crust and a custard creme centre. This guy in particular, was filled with pistachio creme!