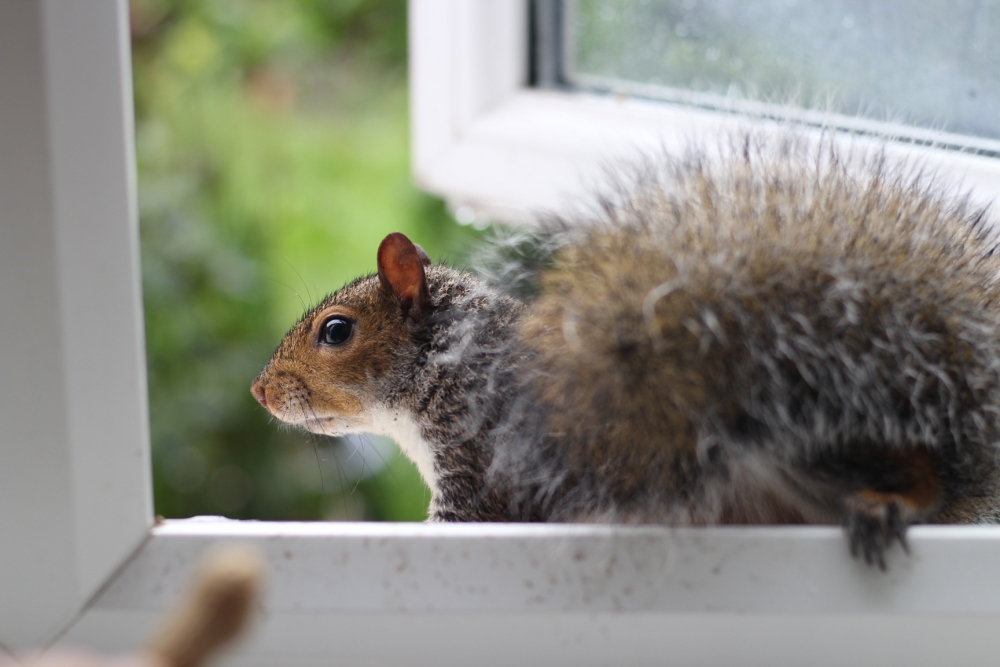 We did a thing.

I promise you that it started innocently enough. We thought that if we put the birdseed in the special feeders, the squirrels couldn’t get at it. And although a part of me was happy that they were no longer chewing on my plants, the whole situation wasn’t great for our plan of attracting birds.

So then we thought, that maybe if we bought some peanuts, and put those on a little plate. Then maybe the squirrels would go for the nuts instead. (^this one is legitimately giving me a death stare)

The squirrels liked the nuts. But they didn’t like it more than the bird seed.

And I’m not sure it made squirrels less of a feature in my garden drama.

Honestly, I suspect it’s a bit like the zombie problem.

In a zombie apocalypse, it might be helpful to make a sound, away from where you are, to try to keep yourself and your kind safe.

But that sound might also brings more zombies from further afield into your area.

Or at least, they brought squirrels that weren’t afraid to come back again and again. Some point in the whole saga, Ella The Cat’s new favourite garden spot became ‘under the safety of the chair’. I’m not going to libel her by saying that she is definitely scared of squirrels…. but.. Some of the squirrels are particularly brave, which is probably a sign that we shouldn’t put any birdseed or peanuts out for them again. I’ve had a look on various sites online about how ok it is to feed squirrels, and some say that it’s not ok, while others say it’s fine but that it’s better to not get them too familiar with humans. (Although the way these ones act I feel they are already quite familiar).  Part of the issue is that the simple act of trying to grow flowers seems to have fallen into the squirrel’s definition of ‘being fed’. But maybe that was just a clever ploy for attention and peanuts. Squirrels seem to fall into that suspicious category of animals that somehow manages to thrive under high human density. This guy would see a peanut, and run towards it, flinging himself at the windowsill with a large thunk (and then a secondary ‘bounce’ if he slipped off), scuttling along the sill and looking around for some food. Although I don’t really have any squirrel-recognition abilities, I call this one Johnny.
I think you’ll see why: Good thing we’ve got that high quality guard cat to keep the balance inside and out of the house I guess???