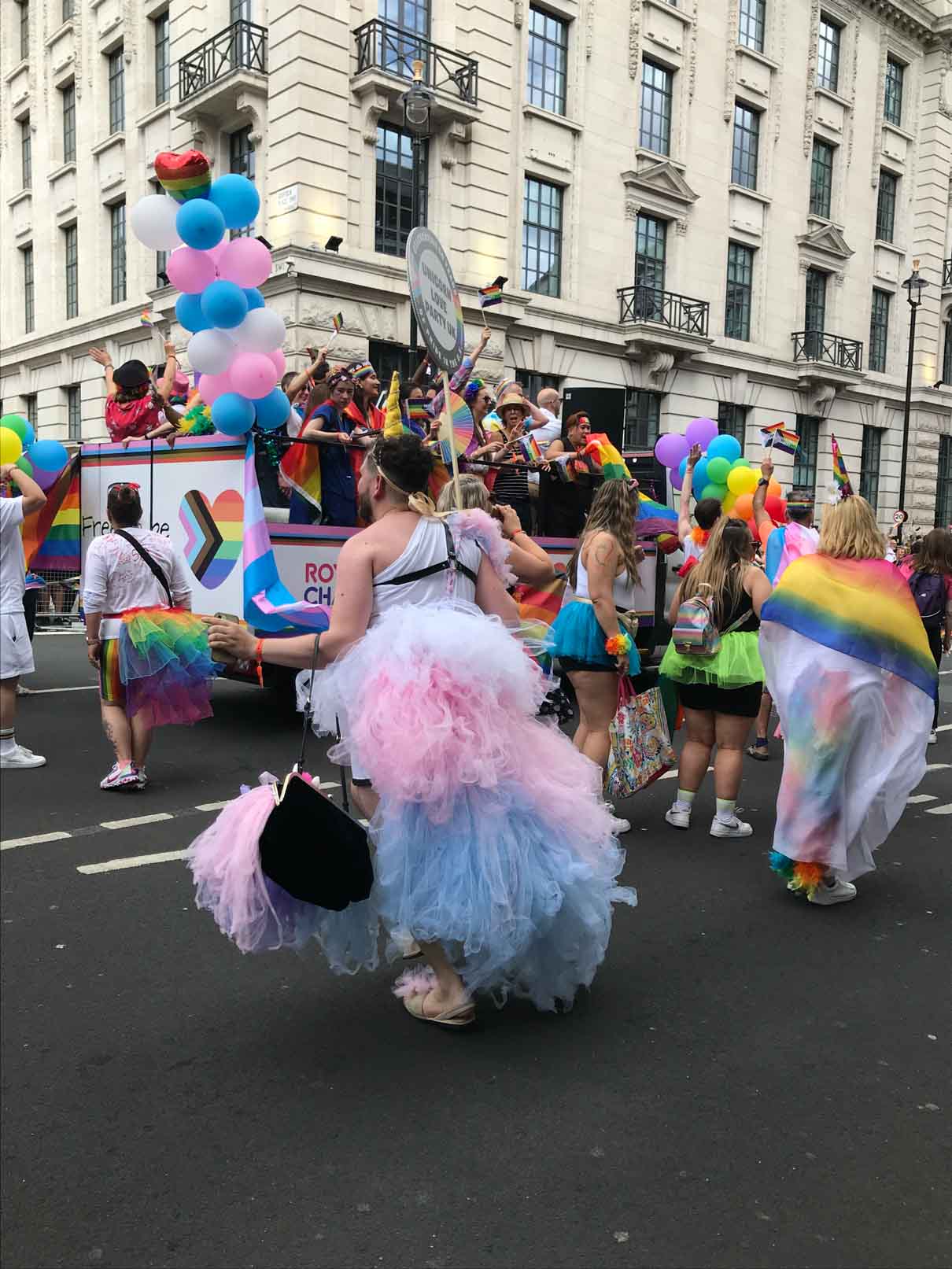 The week began fairly slowly, after a not uneventful previous weekend.

On Monday, we worked all day, then rewarded ourselves with joyous feasting at our new favourite Korean restaurant. There was more food than this. But I scoffed too fast to take the snaps, and even these were stolen from Sameer (who is perhaps a little more dignified than the rest of us).

On Tuesday, after work, I met up with Jocelyn and we just sort of wandered a bit.

I was most impressed by this tree, which seems to have attracted a cluster of gravestones. I seems they were pushed inwards when the graveyard was ‘moved a bit to the left’ to make way for the railroads.

Jocelyn seemed most impressed by the canals, and the fact that there is quiet and nature right in the city centre. We walked from Kings Cross to Camden, and then quickly left once we saw the not-so-exciting market places.

Of course there was also food- this time Caribbean, which is well represented in my London neighborhood, but not so common back in Perth.

On Wednesday, Jocelyn and I made our way to Sir John Soane’s Museum, which is actually the former house of the famous architect.

Weirdly, this is one of the few museums I’ve actually visited during my last two-and-a-half-years of living in lockdown London, but it was definitely cool enough to see a second time.

Also, since I last visited with Ikumi, I had learned some new goss from Sameer (the man has an uncanny knack for asking all the questions, and getting all the juicy info) about the former caretakers/curators of the place basically just keeping half of the museum closed so they themselves could shack up in a fancy central London location.

The thing about revisiting a place, is that you see some new things, but you also realise how certain objects are particularly able to catch your eye.

(Can you tell we’re both unimpressed?)

In all seriousness, my heart was still won by the fancy clock, and the room with many mirrors

(*I would like to mention here that I tried a stirring rendition of ABBA’s ‘Mama Mia’ in one of the mirror sets in an homage to the previous weeks’ trip to ABBA Voyage.

I don’t think Jocelyn was as impressed as she should have been.)

I still think that John was probably a bit of a Tosser, but that he had a nose that rivals the Family Nose.

I also still think that his decorating style leaves a lot to be desired (and I say this as one of the most hoarder-y ‘more is more’ people you’ll ever meet), and that he should give back a lot of the stolen loot.

(We had a slightly odd discussion with one of the minders there, who responded ‘Because the British Library didn’t want it’, when we asked why the clearly looted Egyptian loot was in the museum.)

Despite my morals and all, if Johnny and friends do happen to choose to ‘give forward’ instead of ‘giving back’, I’d be ok with taking this following one off his hands:

I guess that solves the age-old problem of ‘how to decorate when you only have a bit of leg’???

Take note all of you who stole penises from statues!

The final photo here is a ‘picture room’, which literally has walls that fold out so that you can show off the other half of your collection. Will contemplate this with books when my own hoarding becomes too great.

The history of John, particularly his overly-nasty relationship with his offspring, are pretty interesting, and the museum (which is free) is well worth a visit if you’re ever in the area.

After a leisurely stroll, lunch in China Town (Shrimp Cheung Fun For Life), and a mediocre cardamon roll (too croissant-y), we went for our main Event of the day.

ALL RISE for “To Kill A Mockingbird”.

I have to say, I was a bit concerned about the length of the show, but it managed to be breathtakingly engaging the whole way through. In fact the only thing that I didn’t think worked that well was the use of #AllRise as a kind of opener (and closer)- it felt a bit too forced. I also wasn’t sure why Rafe, who played Atticus, was given the final, individual bow on stage. I realise that he’s the hero of the story (and that Rafe was the more famous of the actors involved), but Scout (Gwyneth Keyworth) is the true narrator, and she, Jem (Harry Redding) and Dill (David Moorst) were all incredibly well played, particularly given the very difficult task as adults acting out kids who additionally have to take on the majority of the narrative push.

Overall, it was amazing. I want to read the book again to understand how certain elements have been modernised (I’m particularly curious about whether there was some development of Calpurnia), and also have the sequel (Go Set A Watchman), waiting for me. It’s definitely a play I’d watch again if I could find my way into some affordable enough tickets.

Thursday was a fairly quiet day, in which we got up early to take Jocelyn to the airport (or, to the connecting train to go to the airport), and in the evening watched the newish David Attenborough documentary, Breaking Boundaries. It’s a bit of a strange one- a paper (or a series of papers), now recreated in the documentary form. Overall, there’s some interesting information in there, but have to say I wasn’t particularly impressed overall by the execution (which relied heavily on weird CGI of morph-people walking outwards at the ground beneath them became symbolically hotter). Still, it was very nice to get to see it as part of a work event, organised by our office sustainability team.

On Friday, Sameer and I went to see ‘Sun and Sea’, which apparently is a ‘‘Durational Lithuanian climate-change opera’

It’s really hard to explain, and I rather enjoy that most of the Timeout article is just explaining how hard it is to explain.

Let me try, shall I?

You go to a theatre.

Some people (including all the kids) are wandering around, doing beach things. They’re playing badminton, entertaining the dog, taking photos, eating food.

Others are lying on towels, reading or dozing or checking their phone or just chatting with friends.

And someone is singing. Sometimes multiple people, sometimes in a harmonic chorus.

They sing about banal things, like sunscreen, and their recent holiday, and their love and the colour of the waves. But they’re also singing about global change and the climate crisis. (the lyrics are here).

You move around the upper deck, looking at the scene from above, and they move around in their beach world below. Some enter, some exit.

After one hour, the loop starts again.

(The whole thing is continuous, with no defined starting time, so you can watch it from when you enter, to the point you want to leave).

I liked it a lot, mostly because it’s different from anything I’ve ever seen before, and because I enjoyed picking out and noticing the weird little details throughout. It’s hard to describe all of these things, but for example, I love that in one corner, a woman was sitting and talking to a friend, but was actually signing the lyrics out. And I loved wondering at the blurred continuum of reality: not all of the members were part of the singing cast; others were mostly just ‘visual support’; many of the kids were clearly being actually entertained despite being aware that they were actors, and the actors were also coming and going, eating food, etc.; the animals were just being themselves.

All in all, a really unique experience.

We carried the seaside theme into the evening with a trip to a seafood restaurant.

Yes, that is a Bloody Mary type drink complete with an actual Oyster on top, fried pickle, and some ornamental seagrass.

It was actually pretty good (and as it turns out, fried pickles are INCREDIBLE- did we KNOW?), although someone did choose to lick off all of the chili flakes and then noted that it was ‘a bit too spicy’.

The seafood feast continued with a platter, an oyster (just for me), some mussels (which were a bit too salty), and a sardine (which was a bit bony).

We also ate something called a Lemon Posset, purely because I had heard it discussed on a podcast the same week, and had never had one.

It turns out that it is mostly just Really Rich Cream, and if you scoff it fast after eating a full meal you may end up with a stomach ache.

Life is all about learning

On Saturday, we went to Pride.

More accurately, Sameer actually marched in Pride (there were limited spots to actually join the parade), while I watched and freeloaded off his company’s Pride Brunch.

I want to mention that Sameer put the rainbow strips both on my cheeks, and as weird kind of ‘stubble’ on my jawline, the latter of which he did in a ‘unique’ kind of jittery ‘waving flag’ way.

After doing this, he proclaimed loudly ‘wow, I’m a natural’.

Weirdly, a lot of his colleagues ALSO said wow, but then specified quite forcefully that they would only like the cheek rainbows please.

The venue had makeup wipes.

I went for a bit of a walk before the parade began, and then came back to watch halfway through, and then stalked Sameer the Flagbearer to the finish line.

I’ve mentioned this before to those who are closer to me, but the thing that makes me emotional is when people come together to support eachother and to overcome the shitty things in the world.

Pride does that for me. Particularly this year, after all the crap that has rained down particularly heavily the LGBTQ+ community.

We thought a bit this year about what our role is as allies here, and I was also left thinking about the role of corporations. In a pride parade that had strictly limited spaces, it was a bit strange to see so many marchers under the banners of big companies. Part of me finds this unnerving: there’s a pervasive rainbow washing element that can soften change. But I’m hoping that this was also a kind of reflection of the shifts we’ve seen in the last few years; where it’s finally recognized that there is never was any ‘neutral position’ to be taken in not speaking up for everyone’s rights and freedoms.

Anyway, I hope you all had a very joyous Pride, and if you didn’t celebrate, think about maybe joining in next year. I personally manage to gather myself for Christmas and Easter celebrations every year, despite having no belief-based connection to those events… but it’s really really nice to be a part of a genuinely believed-in celebration!

Annnd, that’s basically it for the week.

On Sunday, some of Sameer’s friend’s (including a very cute baby) joined us in the city, and we ate Austrian brunch (not to be confused with the far-superior Australian Brunch 🙂 ), ate icecream, and generally wandered around the city. But I forgot to take photos (or at least, still feel weird about taking photos of people I’m only just getting to know). Maybe next time!