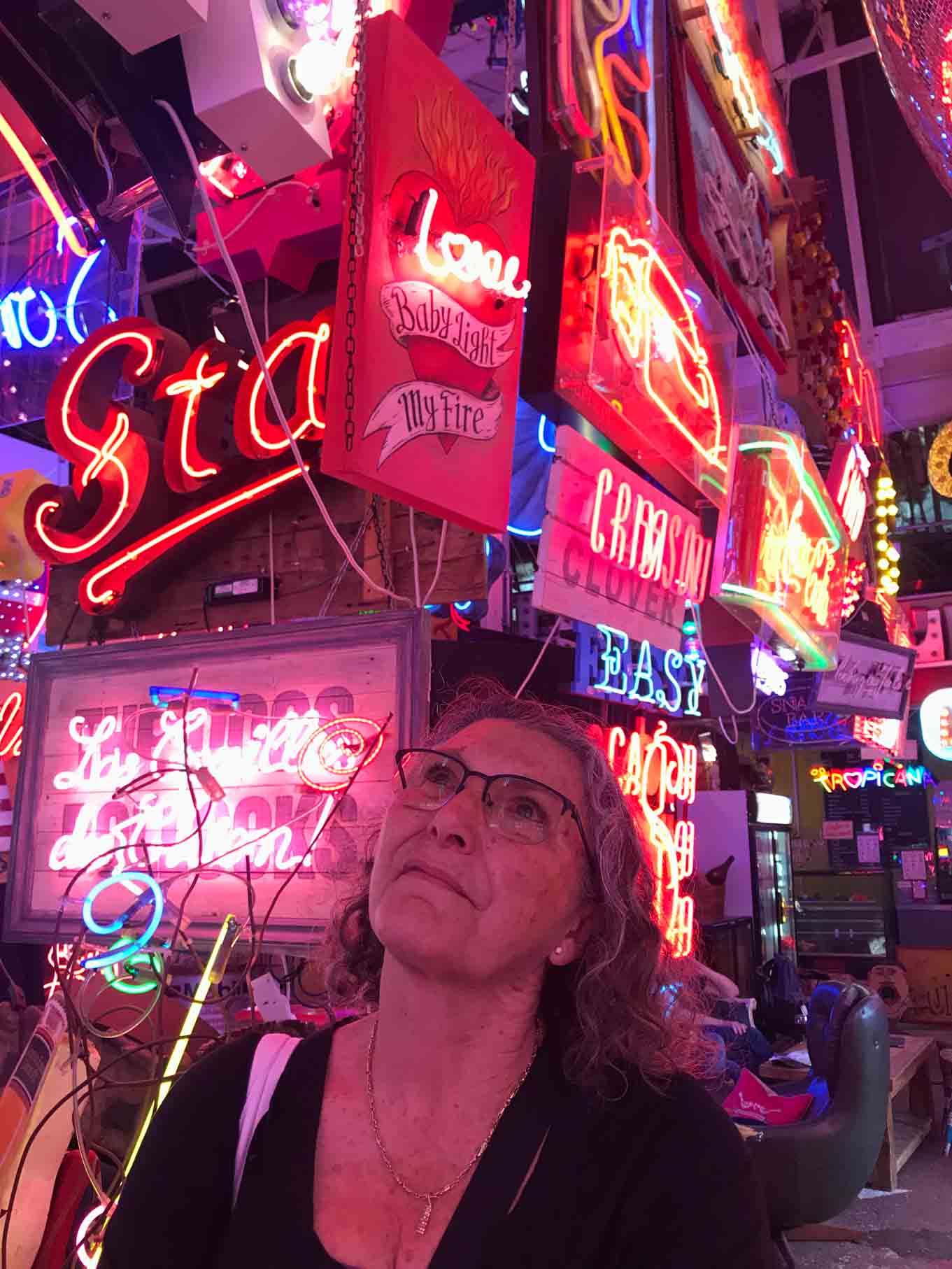 Now that things are happening again in a way that is some sort of normal ((TM)new/normal), I thought it might be nice to report on the Things that We Do, possibly even on a slightly more regular basis.

As it turned out, Jocelyn wasn’t supposed to arrive until Tuesday. But the Great City decided to do a bunch of train strikes (Tuesday, Thursday, Saturday- evenly spaced for maximum disruption into the following days), so Jocelyn wisely jumped on an earlier train, and arrived on Monday evening. bI

We met her in the city, ate our body weight in Dishoom (Indian food- the eating was at a fast enough pace that we failed to photograph anything), asked her 10000 questions (mostly Sameer did the asking), and then shuttled her back to her home.

Tuesday was a Day of Chaos, Lights and Mirrors

We probably should have cancelled the visit to the Tate Modern once we knew the train strike was happening.

But how can you cancel the chance to see this:

Yayoi Kusama’s mirror rooms have been showing at the Tate Modern for months, but they’ve also been sold out for months.

We only got tickets because Someone’s Work gives him secret access to things that are normally out of reach for the peasants. Even then, it took a bit of scrolling and a bit of waiting to find a slot.

The whole thing ends in September, so I was very much in the mood of ‘I am not throwing away my spot’.*

*(I do realise the original Hamilyric is ‘I’m not throwing away my shot’, but if you know anything about Yayoi, it’s that she likes spots.

So Tuesday saw me start off the working day at home and then riding my bike to a cafe near the Tate during lunch so I could then take some meetings before leaving for the day before POUNCING on the exhibition at 4:15 pm.

The exhibition started with some self portraits of the artist with her work through the ages. Now I tend to go for the ‘don’t read too much before hand so you can experience the Art Firsthand’ approach, which might also be called ‘laziness’.

Luckily for me, Sameer seems to be more of the ‘obsessively researching everything he can’ kind. So I basically had my own private tour guide to describe the background and journey of Kusama.

For those of you who don’t have a Sameer at home (you should get one, he’s great), you could probably do ok by checking out this video.

Anyway, before we jump into more mirrory things, let’s all appreciate Sameer, and also the fact that this boat full of penii also looks like a penis from above.

But also, we start to enter The Infinity.

The cliffnotes version of Kusama’s story is that she got hallucinations with dot like flashes since she was 10, which have made their way into her work in various forms. (There’s also something in there about various old white guys stealing her work – looking at you green pants Warhol- just in case you haven’t been mad at old white guys yet today).

In any case, art acted as an escape for Kusama, but also you get the feeling that the mirror rooms are the perfect attempt to draw the public into her hallucinations.

Getting back home was a nightmare, and it’s two weeks later, and I still haven’t brought my bike back.

Still absolutely worth it.

Wednesday was a Fishy Day

Jocelyn was feeling fishy, so we mostly rested. Except that we met for lunch in the park with my tiffin picnic case, some incredible bread, lots of fresh fruits, and a small tin of Latvian fishies from Sameer (not invited to the picnic).

Friday was Filled with Lights and…. ABBA

We didn’t do anything on Thursday (more resting for Jocelyn), but did mange an early escape from work on Friday. (My company now has half-days in Friday for the summer).

We spent the early part of the afternoon walking through some of the posher parts of Walthamstow; heading through to the Village and God’s Own Junkyard.

Which, in case the name threw you, is this:

To be honest, I kind of love it. Neon is objectively cool (although I think I do prefer something slightly more retro than this), and it’s also the place that Sameer and I went on our first date, which is kind of nice in a gooey way.

If i’m honest, I think Jocelyn’s response was mostly ‘hmmmm’.

In any case, the main aim of the day was to Be Leisurely until the main event in the evening, which was… THIS:

Ok, so they didn’t allow any photos inside, and I am very well behaved etc.., so all you can see is the amount of people. Go here for more details. Make sure you watch the video.

I’m not a huge huge fan, but I somehow know all of the hits (and they had them all). And this, in itself, was truly spectacular- the four artists transformed into virtual creations of themselves, and then playing live (with a live orchestra) complete with the full theatrics of a modern theatre. It wasn’t a repetition of the past, but rather felt like how ABBA would perform on a big stage if they did it today.

I have to admit, I went into this feeling lukewarm about the whole concept, and came out amazed. The whole thing was so so fascinating from a technology point of view, and I’m left wondering if this is the first of a thing that will soon become standard.

Truly Incredible. In the literal sense. I spent half of the show trying to work out if it was actually real people all along.

Saturday was Shakespeare in the Park

During lockdown, or more accurately, during one of the periods in between lockdown that was still effectively a lockdown although not formally one, I happened to see a banner advertising Shakespeare in the Park. In my park, right near my home.

I wasn’t in a particularly good place at the time, and didn’t really feel like doing anything at all, but about 1 hour before the show began, I decided to drag myself out of the house, buy tickets, and watch some a Midsummer’s Night Dream.

It was incredible- one of the best and definitely most engaging Shakespeare plays I’ve ever seen.

So when the same company was due to play again in my ‘hood, we decided to go.

This time around, I came with one Sameer, one Jocelyn, and a tonne of picnic food, to watch East London Shakespeare Festival’s rendition of an 80s themed Twelfth Night.

Once again, it was brilliant! Viola and Olivia were standouts for me, but the whole cast was amazing, and everything from the costumes to the simple stage in front of the town hall worked brilliantly.

Will definitely be back next year.

Sunday was Markets. And eating.

I feel like Sameer walks around so much, that now he knows all the cool places, and should probably have his own walking tour.

On Sunday we had some coffee and basic food, then roamed slowly in the Bricklane/Spitafelds area, looking at all of the pretty and shiny things.

That’s all for that (very eventful) week folks.