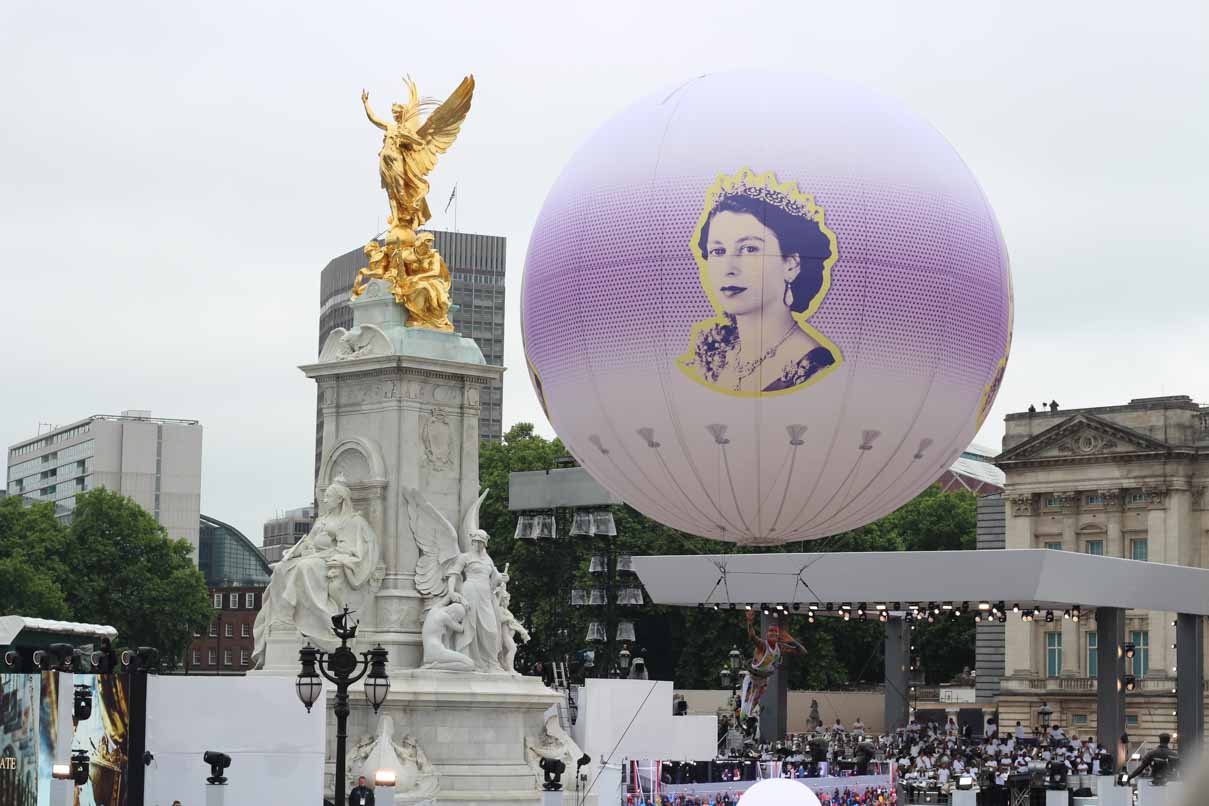 ‘We sat right next to Prince Charles’, is one of those pieces of information I don’t really know what to do with.

Because in some ways, it’s cool: Charlie is undoubtably the most famous person I’ve seen with my actual two eyes right there in front of me. But also, I deeply do not care for the persistence of the British Monarchy. Not to even mention the things that happened in those last 70 years of reign.

So here we are, caught in a place of wanting to name drop, but not wanting to suggest that we support the monarchy.

Caught up in the celebration and the strawberries and champagne of it all, but finding it a little weird that we were part of the whole show that was thanking this woman for 70 years of empire. (And was it not odd that the two people who really thanked her publicly were her own son and heir to this all, and an animated cartoon bear?).

As I say every Christmas, I don’t actually believe, but I am a hypocrite.

We ended up at the parade because Sameer won two tickets to the event through his company. We had no idea what the event actually was, a kind of confusion that lasted right though the event itself. But we were honestly pretty excited- it seemed like not just one of those things that could mark our time in England (‘I was there the year of the Jubilee’), but also a kind of once in a lifetime thing.

Or even once in forever.

QEII is the first monarch to have both begun so young and made it this far, and it’s unclear how long this whole monarchy game will continue to play out. In any case, Charlie doesn’t have 70 good years left in him, and it’s even beginning to feel quite unlikely that Wills does either.

In any case, Sameer won tickets, kindly put me down as his plus one, and on Sunday morning we dressed in our finery and headed to the described location, clutching our ID in hand (such a serious thing does not allow for the exchange of tickets with other riffraff. Only the pre-invited riffraff please).

The first event, was actually a pre-event, was a pavilion brunch with tables of fine foods supplied by Fortnum & Mason. After a bit of overwhelmed gawking, we did a lap of the room, which was divided roughly into three main hubs.

2. The seafood hub. Smoked salmon being served in slices, along with all sorts of small bites- lobster rolls and prawn cocktails and some delicious crabyy thing. There were also accompaniments. Sameer found out the hard way that capers are not lentils.

3. The Desert Table, which was more accurately a strawberry table. Strawberry champagne jelly, Eton mess, strawberries and cream, and giant meringues that called to my soul.

Meanwhile, waiters circled offering champagne (for those too lazy to walk to the literal champagne wall), and the whole thing was backed by a lady singing and playing the harp.

I’m a bit annoyed at myself for not taking any good shots of the overall look of the place, although i did take a couple of attempts to capture the green splendor of the chandelier. Overall, it’s just really too hard to take photographs while you are trying to stuff as much salmon, cheese and strawberries into your mouth as humanly possible.

Overall, it was a really, really lovely, but there was one thing missing.

At one point, we had to sneak out to get a coffee. When we came back in, the presence of coffee cups triggered a lot of envious eyes, and also a few comments.

At one point, we were wandering around the back of the tents, and Sameer pointed at someone and said ‘oh, he’s the guy from the news’. I shrugged, and when he insisted, brushed it off with ‘not all old white guys look the same Sameer’.

A few seconds later, Jeremy Irons rocked up, dressed in a garb that I can only describe as ‘colonial picnic’, and the spot we were standing and staring from quickly became filled with other gawkers.

At one point, a random couple asked us where we came from (in a very friendly way, but also clearly aware that we were ‘clingers on’), and explained to us that the party was filled with minor celebrities. We said that we didn’t really know the British celebs enough to get a feel for it, and he pointed out Greg Davies (an incredibly tall comedian) standing right behind us. Overall, we lacked the skill for celebrity scouting, although Sameer was much better than me, and did also manage to see Deputy chief medical officer (and major player in the Covid taskforce) Sir Jonathan Van-Tam.

At one point, we got the signal to move towards the parade grounds.

I used the opportunity to take a last grab at some sugar.

The event itself was the Jubilee Parade, with the ‘ticketed’ part that we won being seats in the grandstands that surrounded Buckingham Palace.

Initially, Sameer was concerned that we weren’t in the peak position, as we wouldn’t be the first to see the floats come by, although we were nicely seated to see both the parade to our left and the stage and palace to our right.

Turns out, we we were right next to the box that was filled with fancy people.

(We noticed the whole royal family (minus the queen) there.. but I didn’t realise that Boris was also within spitting distance until I started editing the photos).

The parade began with lots of kids singing, and then various military marchers. Next up was the ‘decades of the queen’ (complete with busses filled of decade-relevant celebrities), and then things got a bit weirder and more fantastical with animal puppets and dancing flowers.

I didn’t take a lot of photos, because I didn’t have a zoom lens with me, but it was fairly fun to watch.

At one point, people began to move in the royal box next to us- security came in and Charles, Will, Kate and the kids got up and left. Rumors were spreading that the Queen was on her way.

Ed Sheeran sung ‘Perfect’, backed by a surprisingly moving montage of the Queen throughout the ages, and then, for just a few seconds, she was there on the balcony, with a throng of celebrities below her.

And then, with a bang, it was over.