This post, powered by Ditsch. For all your recommended daily intake of saturated fats, and so much more: 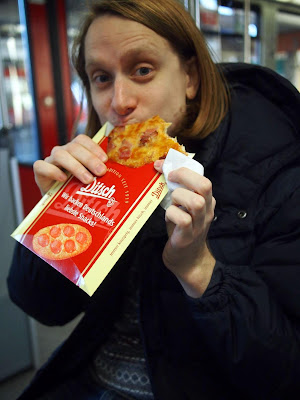 And by delicious sugary buttery things with crumby shortbread stuff on the top! 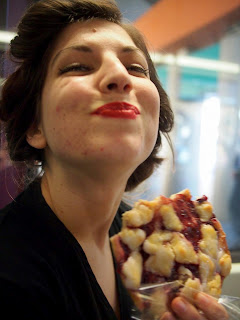 But for the fear of litigation, I would suggest this is The Breakfast of Champions…
On with the story.

Last weekend we went to an art gallery, called the ‘me Collectors Room’ in Berlin. We actually planned to visit a couple of galleries- but the majority of places we saw in the area were more ‘private spaces for selling (overpriced?) art’ as opposed to perusal places. And the other legitimate location was in the process of moving premises. The Cheek!

But it was a sunny day, so the wandering around didn’t do us any harm 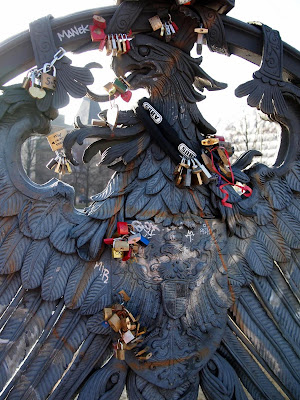 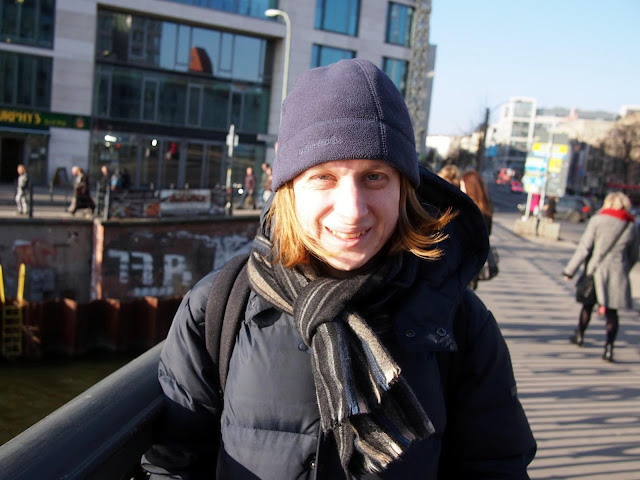 Some may even suggest that it was TOO sunny. 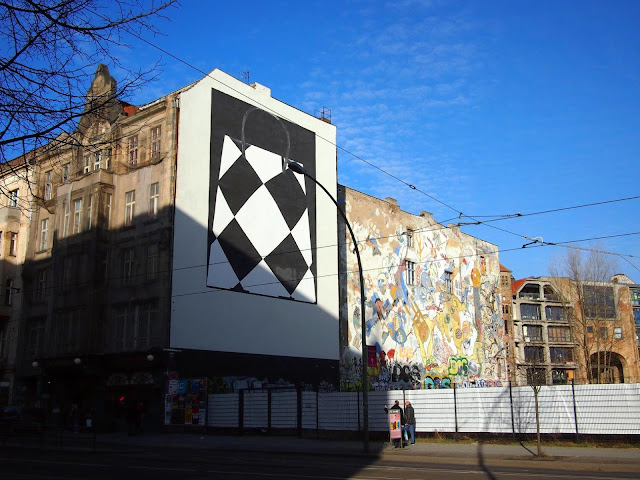 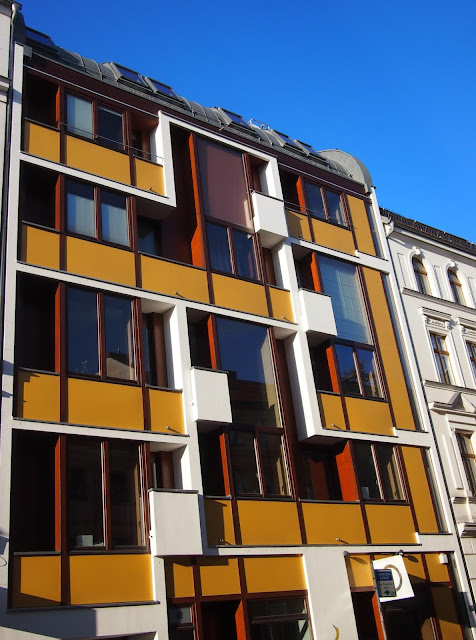 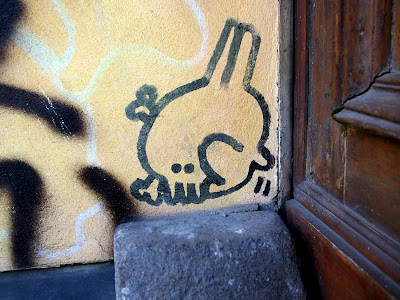 It’s Berlin- so there’s plenty of free art everywhere, but I’m still super glad we committed the 3 or 4 euros to get into the gallery.
It was… strange.
In an awesome way!

I think this guy, situated at the entrance, set the scene for the ‘things to come’ rather well. 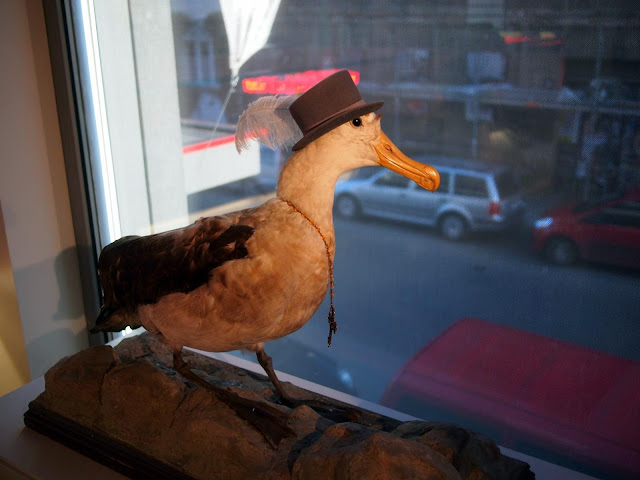 Does it seem somewhat politically incorrect that he has part of one of his feathered friends stuffed in his hat?

Naturally, it is quite difficult for one to pull one’s gaze from a stuffed bird in a hat, but of course, the gallery owners had considered that…. 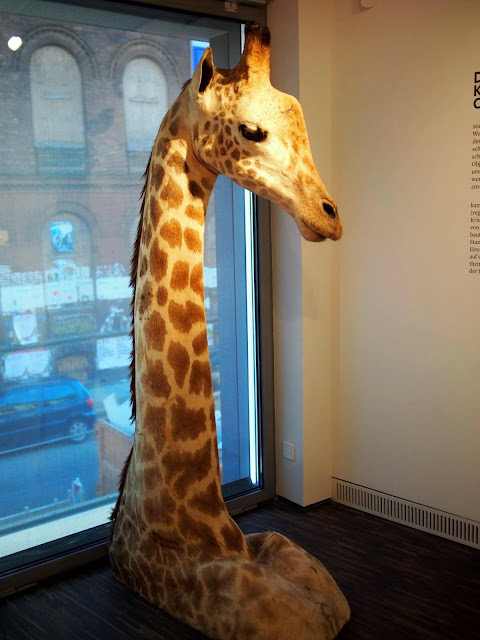 I guess someone else has the rest of the giraffe?

And what followed was much to the same theme: a presentation of oddities collected from around the world, with a particular focus on life, death, bones and religion: 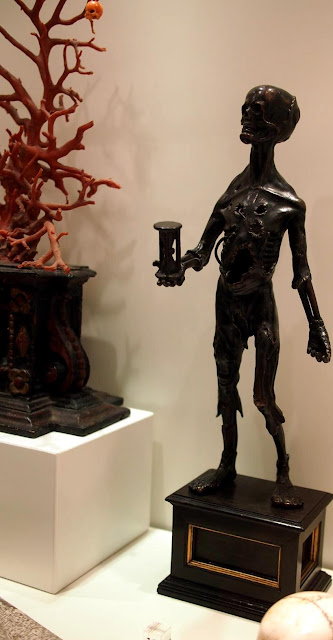 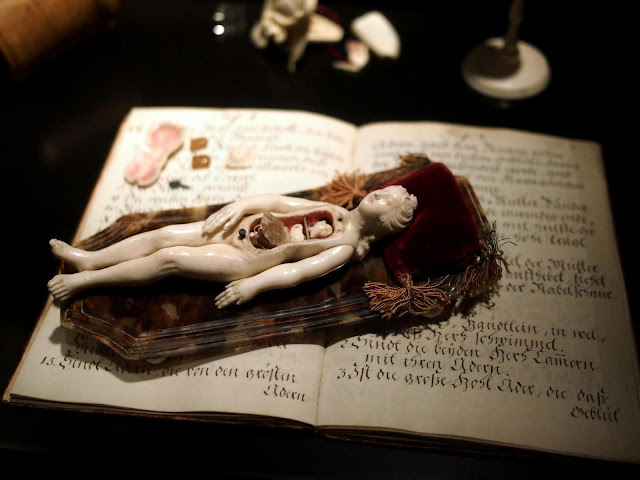 Note the top of her stomach lying in the background. 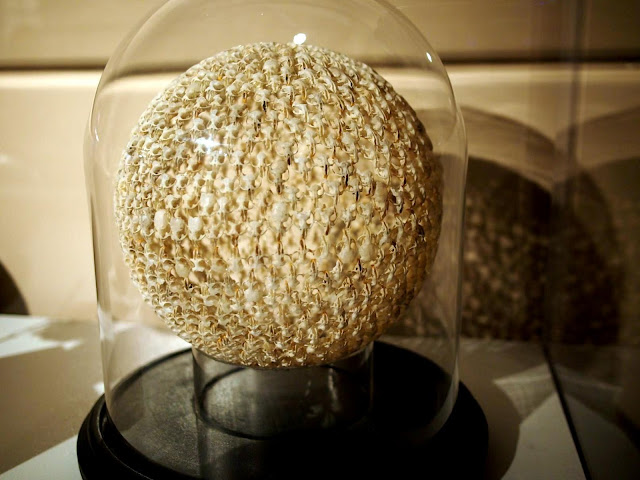 This was quite beautiful. It is made of skulls. Hundreds of tiny little mouse skulls.

And for the Harry Potter generation: 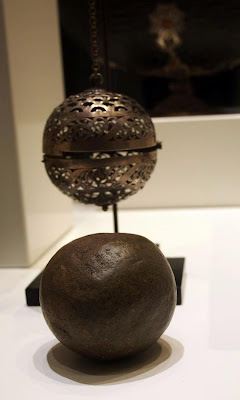 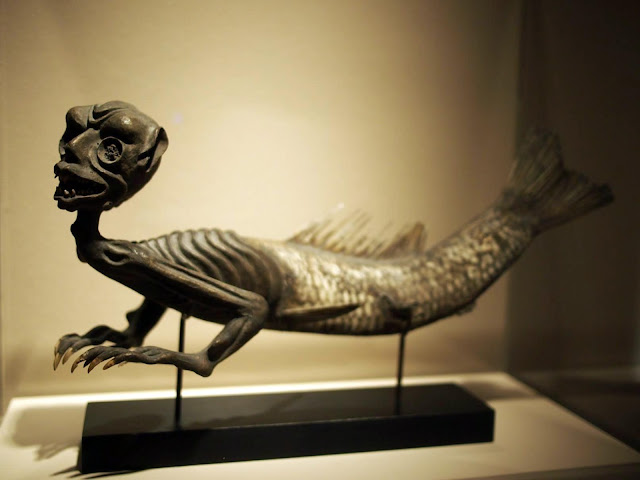 This fellow, or dame- as she is a Japanese Siren, is made with real fish.. and also, for that added touch of credibility, real claws and teeth. 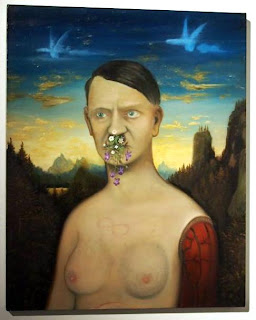 I feel like this is famous? Have I seen it before? Anyone? 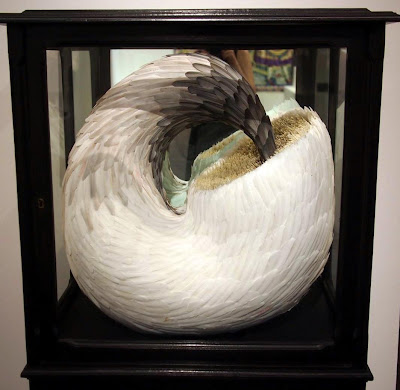 Feathers curling back into a pit of quills. 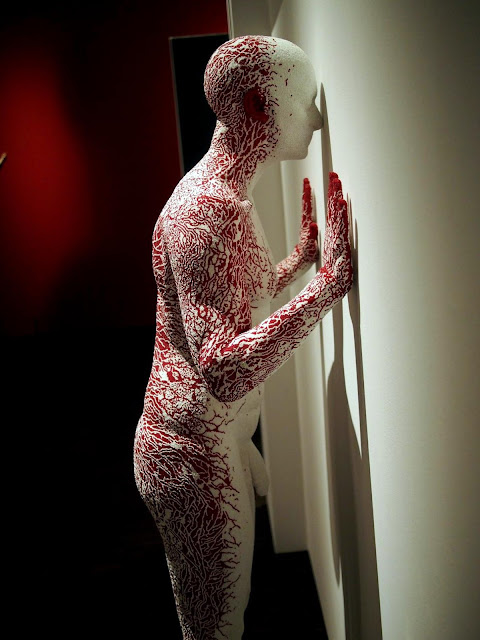 This was absolutely amazing. He’s covered with millions of tiny seed beads. I wish I’d thought to get a photo from the back, because the red veins all shot out from his spinal cord in a very beautiful way.

Good vs. Evil chess set. Ghandi, Superman, a native american, a firefighter etc. vs Hitler, Stalin, Old father time, Cleopatra/Delilah and so on. Quite cool. 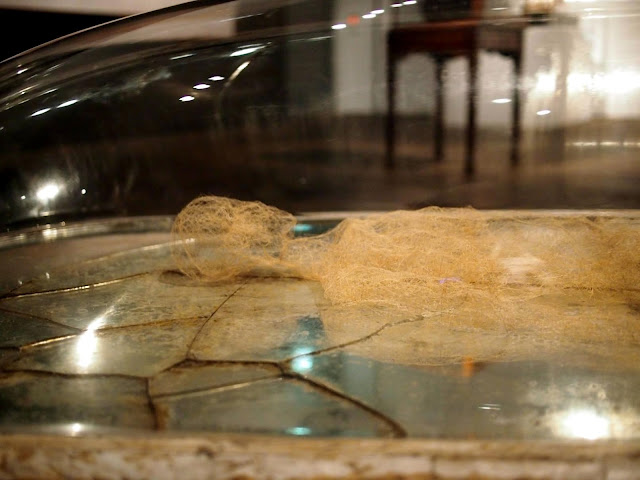 This was also amazing- A human figure in a glass cabinet lying on an old mirror. The figure is made from dust and hair. But of course! 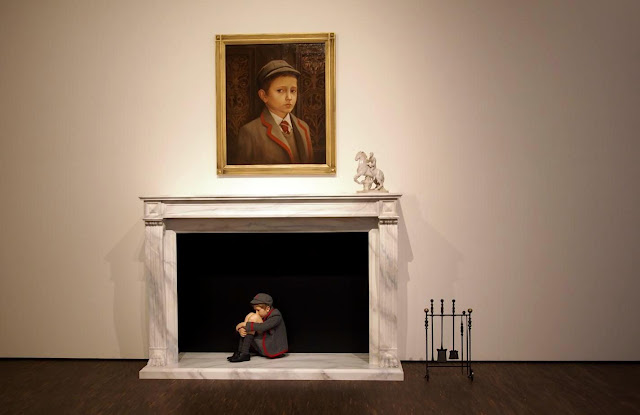 This also feels somewhat familliar.. but maybe it just feels Chas Adams-y? I really like the overall effect. 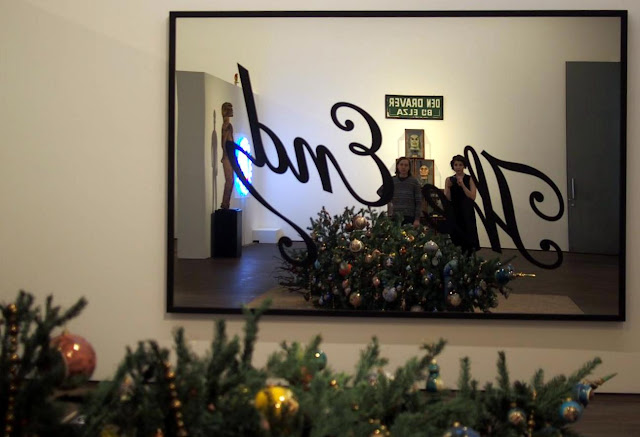 And here’s us at The End.
There was some other super cool things, including a layered Monty Python-esque animation showing the seven vices. Here’s a still (or a picture- I think they may have been originally as shown below) I stole from the Interweb: 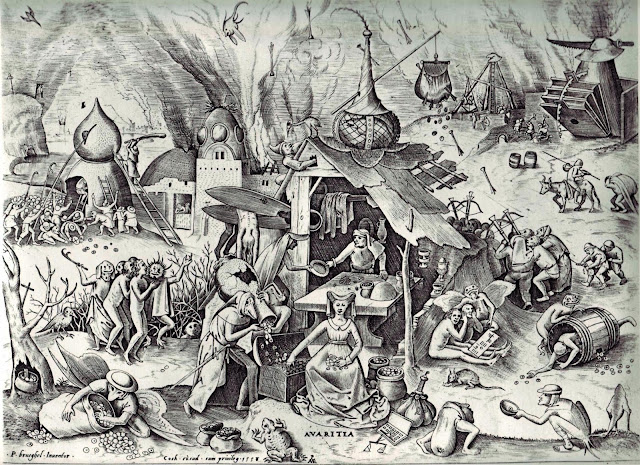 I would really recommend it if you’re looking for less ‘classical’ and more ‘curio’. Quite the cool experience!

And some more art on the way home: 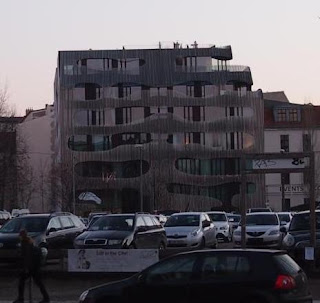 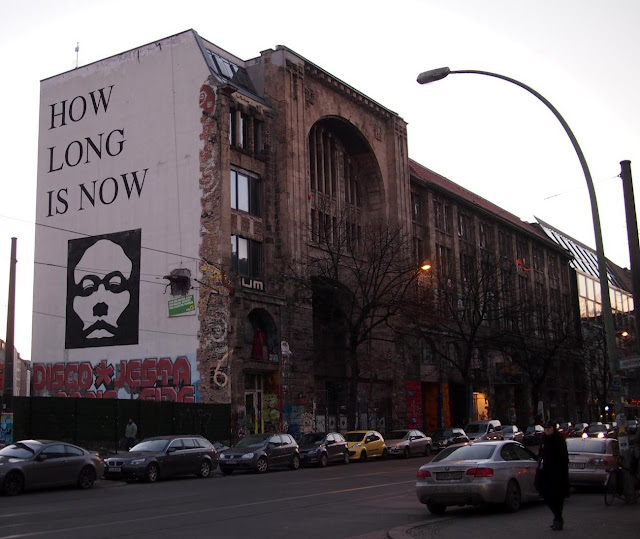 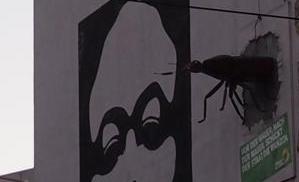