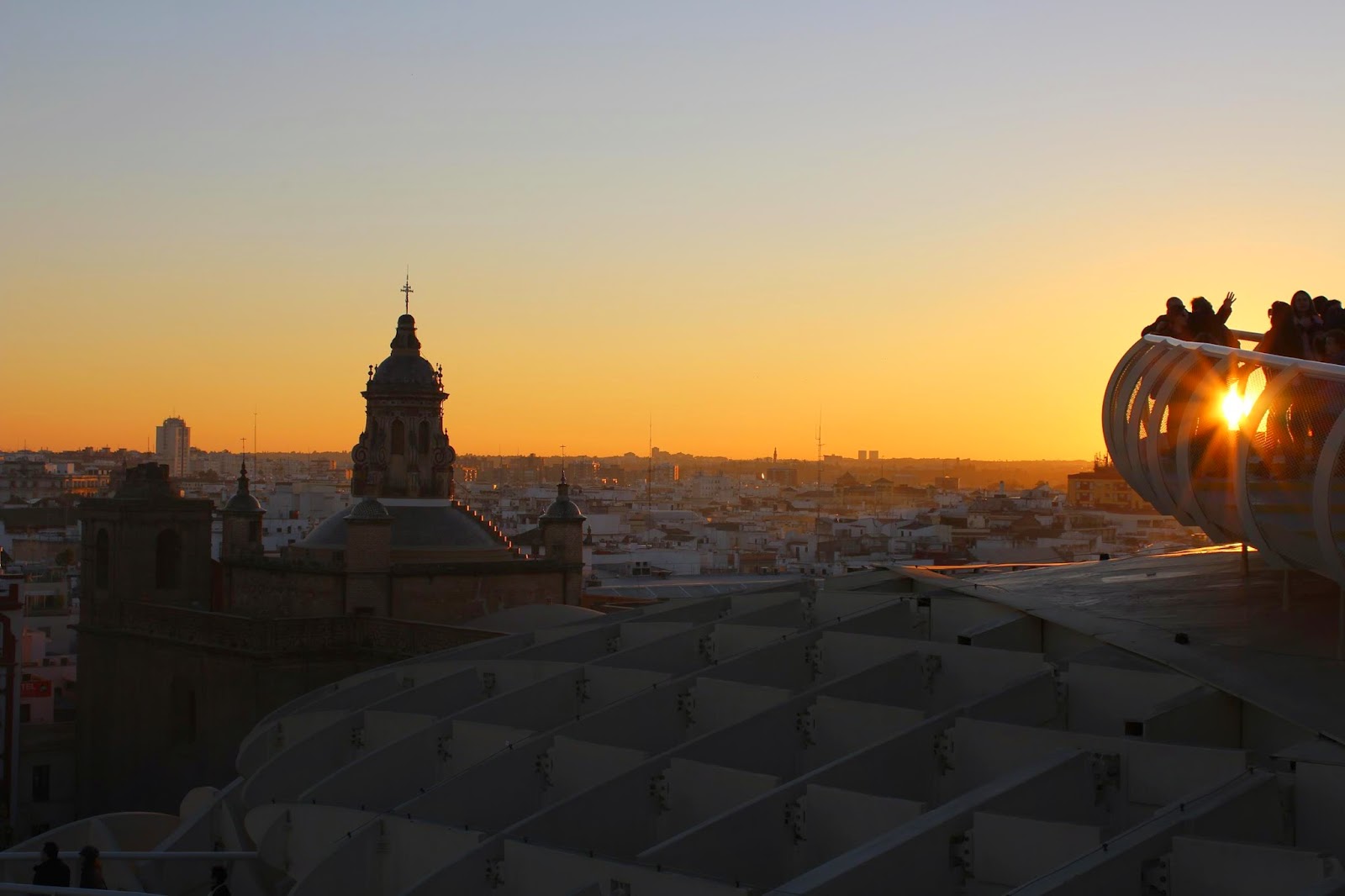 There’s something quite cool about looking at a city from above.
If you can doing at sunset- even better!

On our only tourist day in Seville, Andy and I rushed the family to check out the Metropol Parasol. 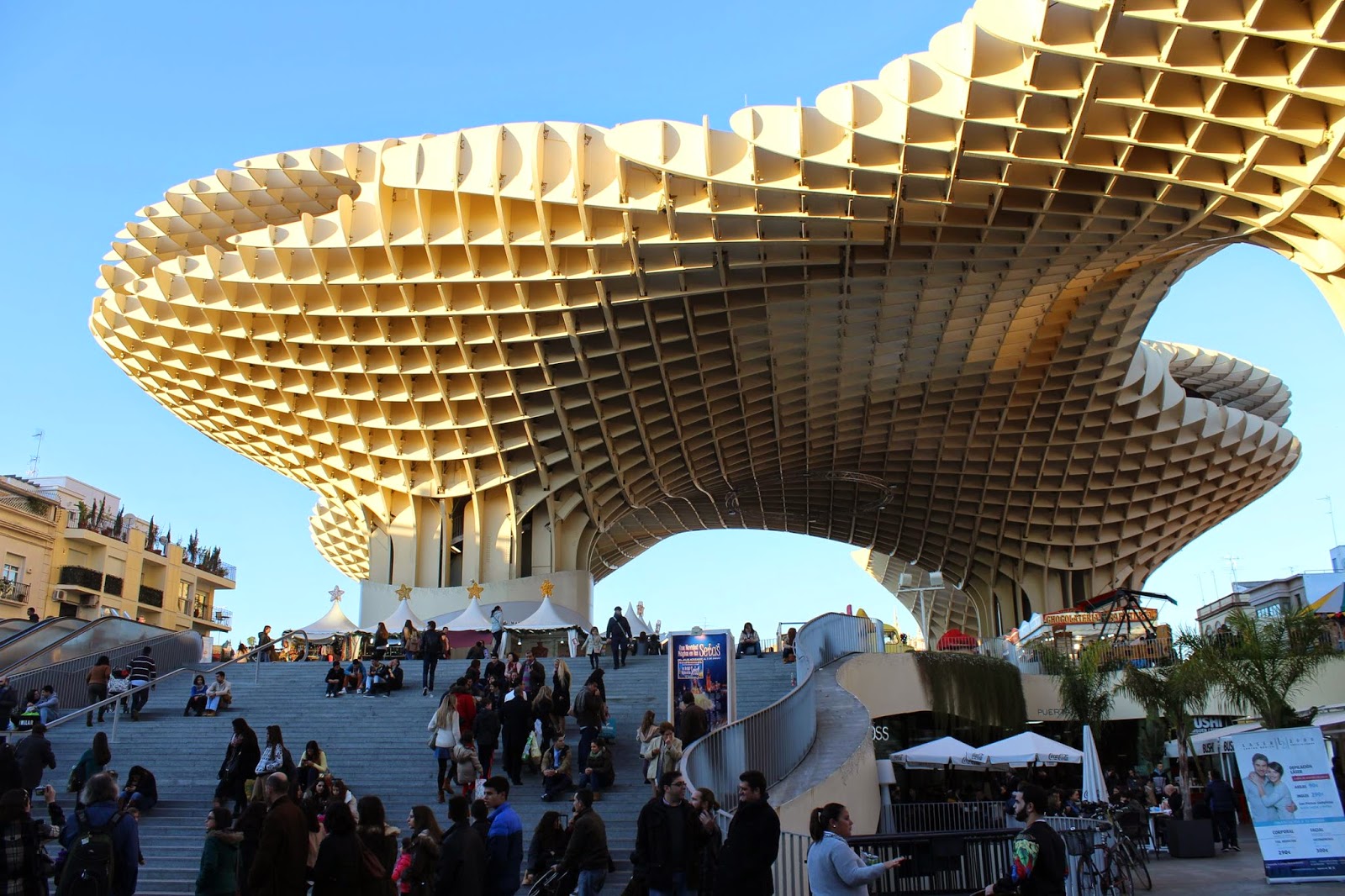 From the bottom, it’s kind of parasol-y. But it’s even more mushroom-y. 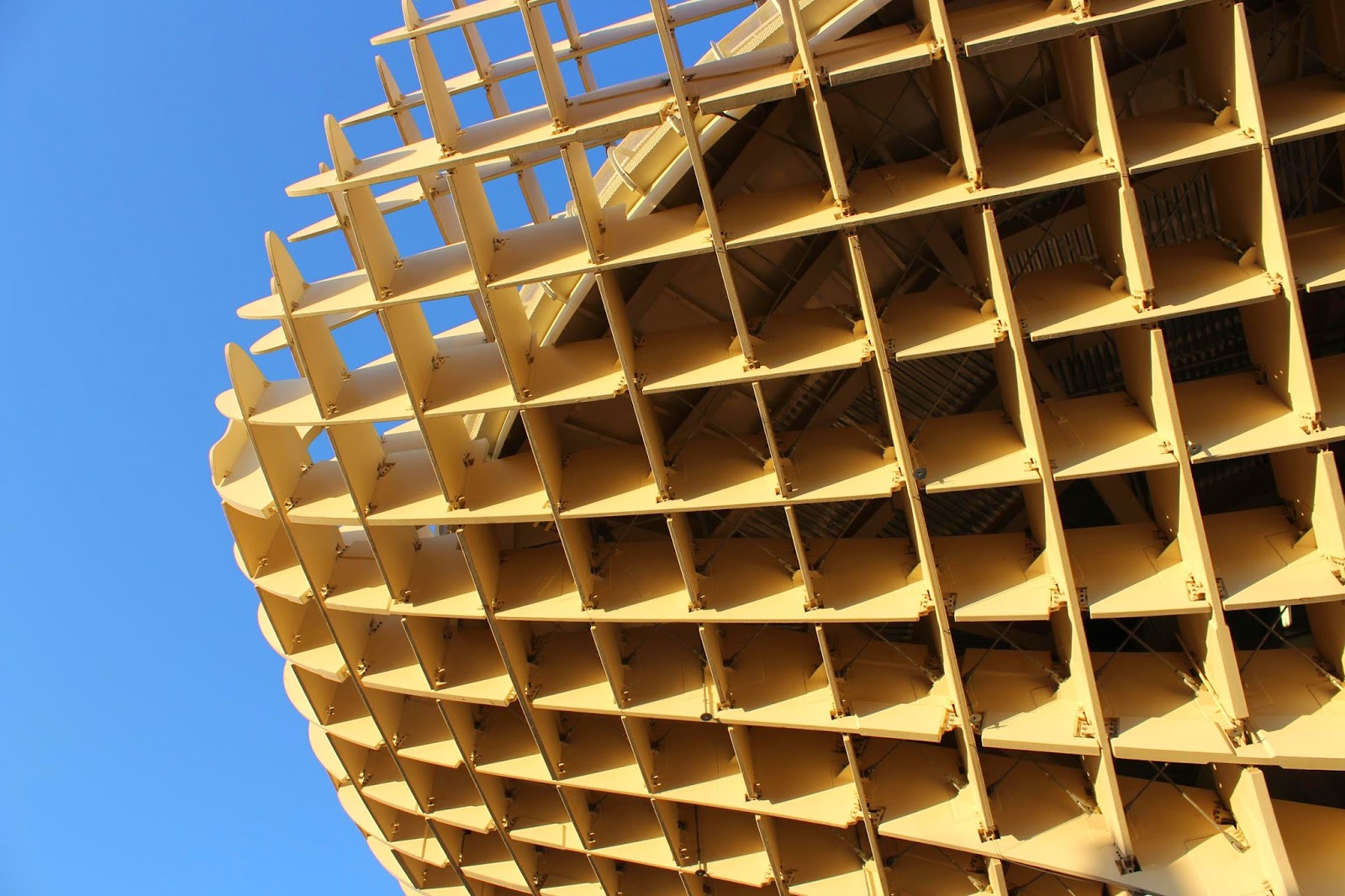 It’s a massive wooden structure, designed by the German Architect (*GASP*- we must have been ‘homing’!)  Juergen Mayer-Hermann and finished only in 2011.

As with all large modern constructions, its construction went over budget and over time. Thus bringing about local public controversy.
Whatever- I’m a tourist.

And loving huge ugly buildings that are distasteful to the locals is what tourists do best! 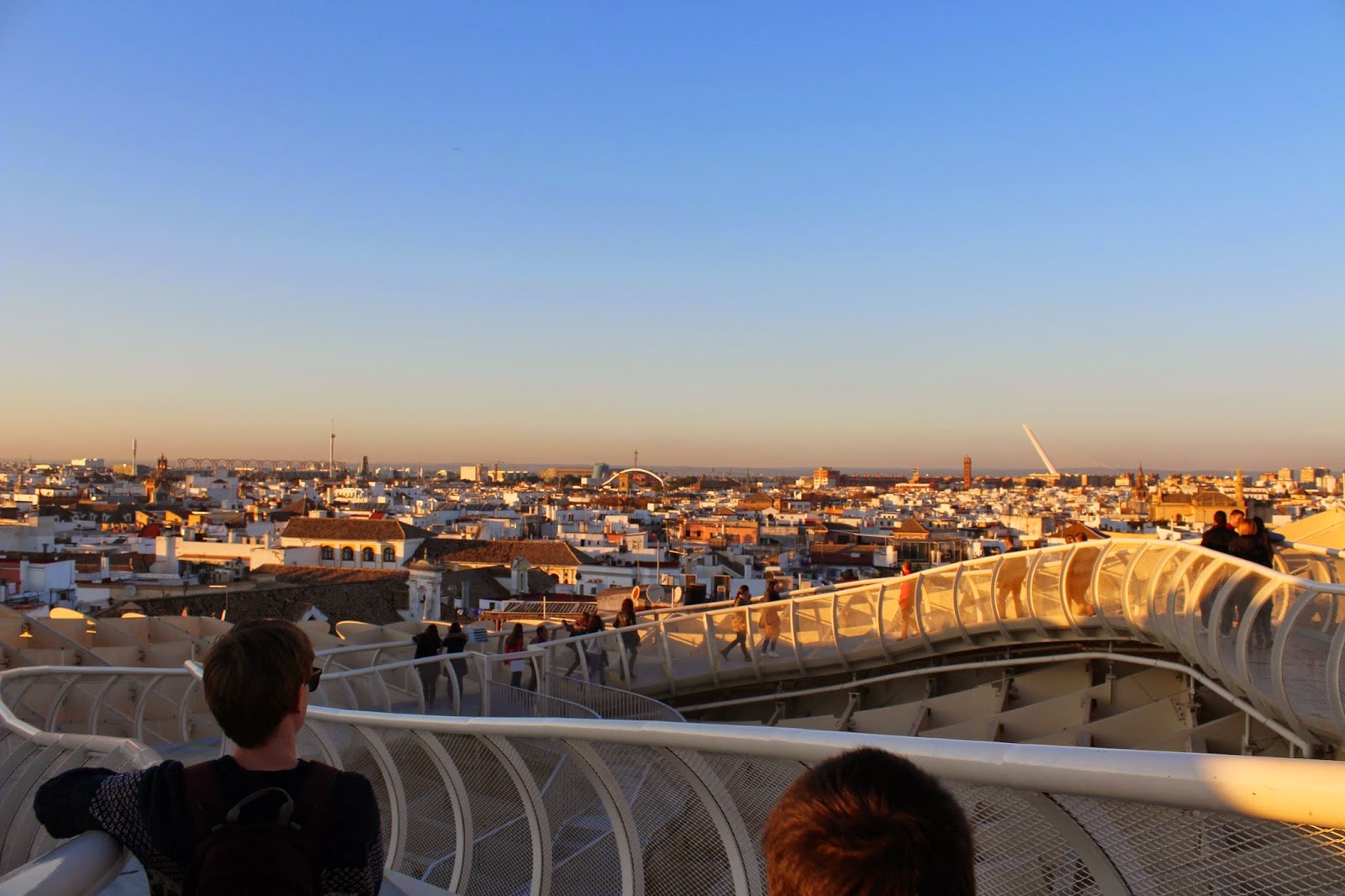 And, who knew!* You can also climb the thing, and get a fairly great 360 degree view of the city.

*(Actually not me, I didn’t really research beyond – OOH! Pretty!, Let us Go To There!’) 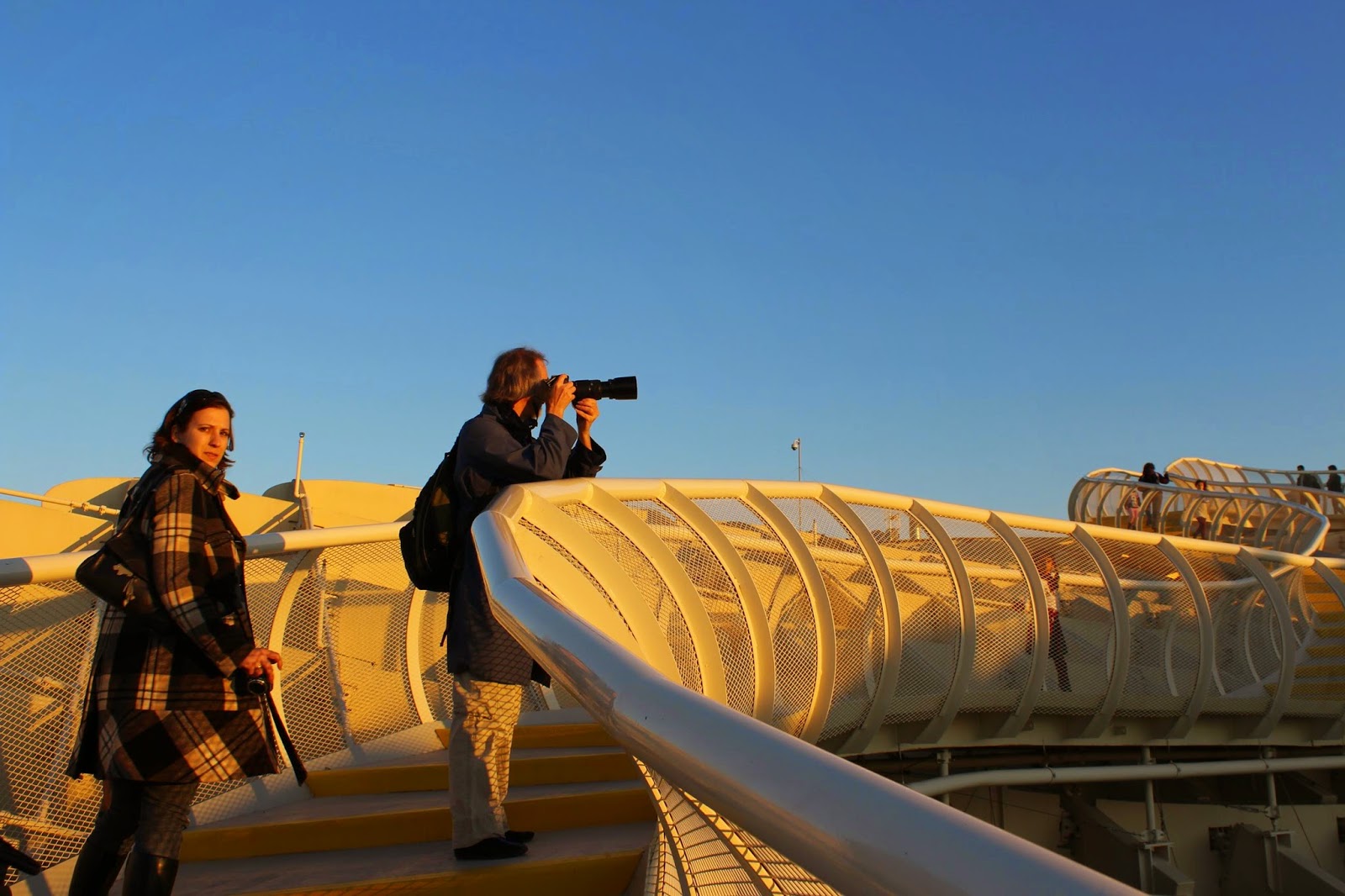 We went up just as the sun went down, which gave everything a nice sort of ‘glowy’ feel. 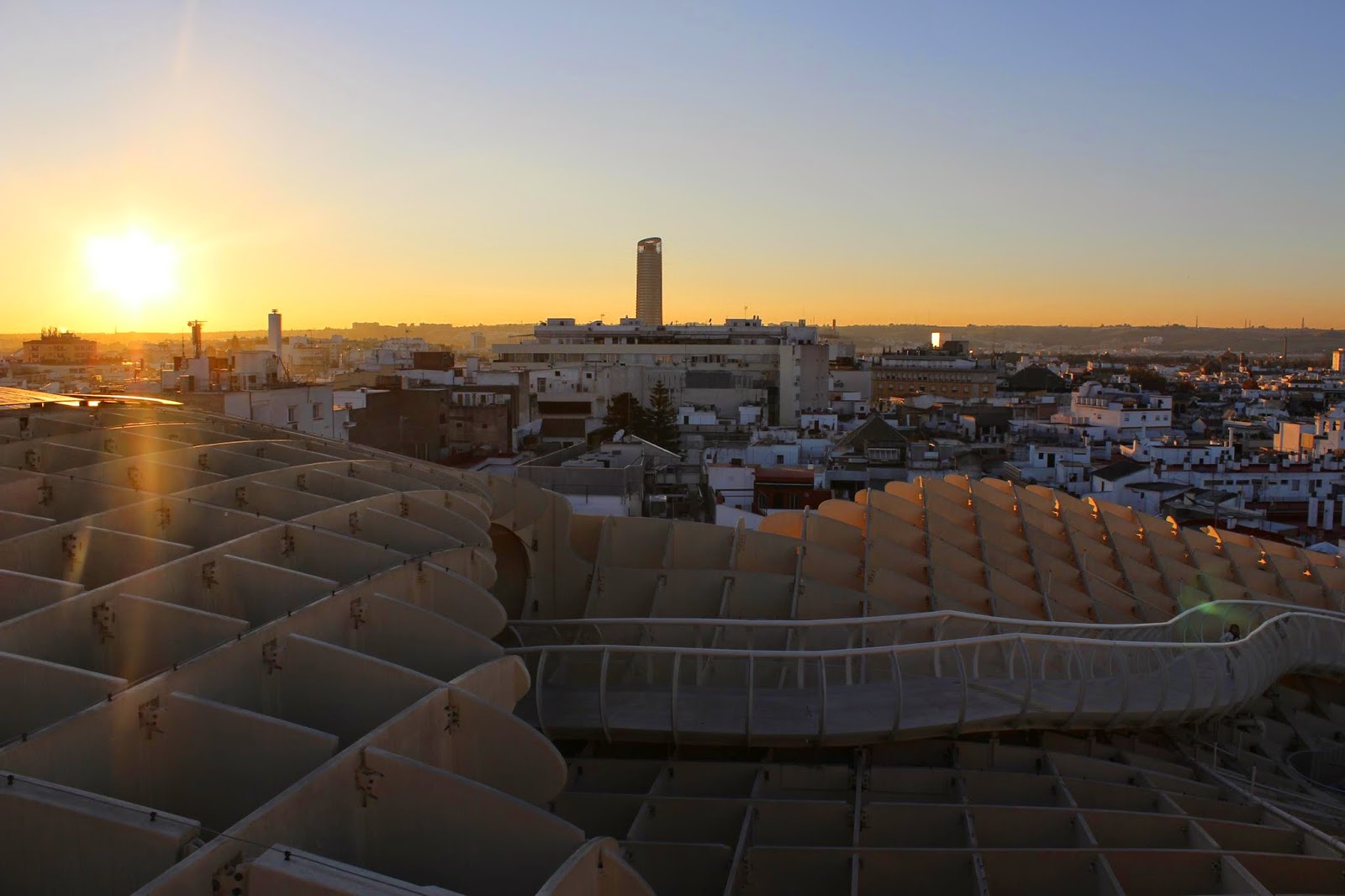 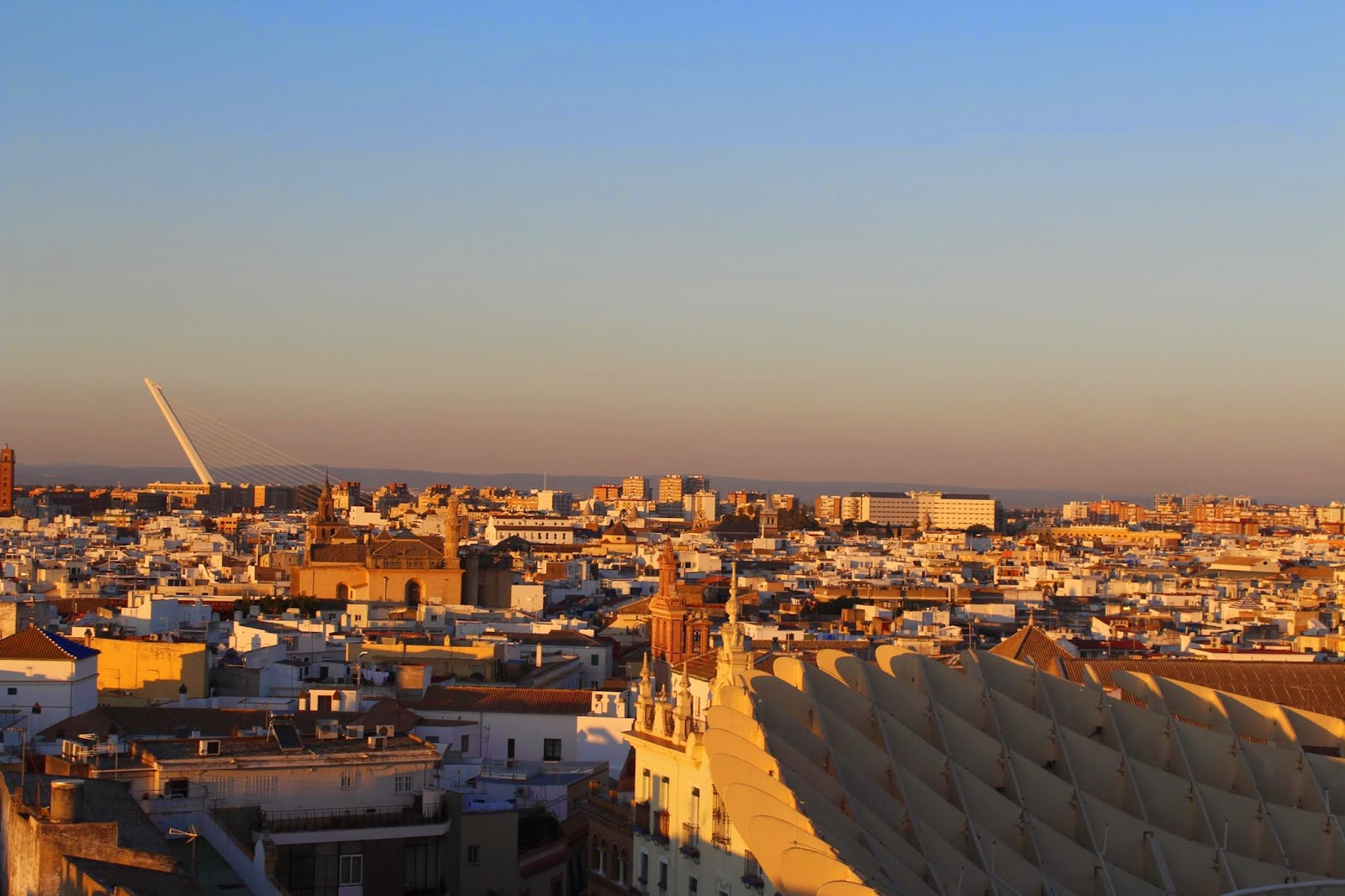 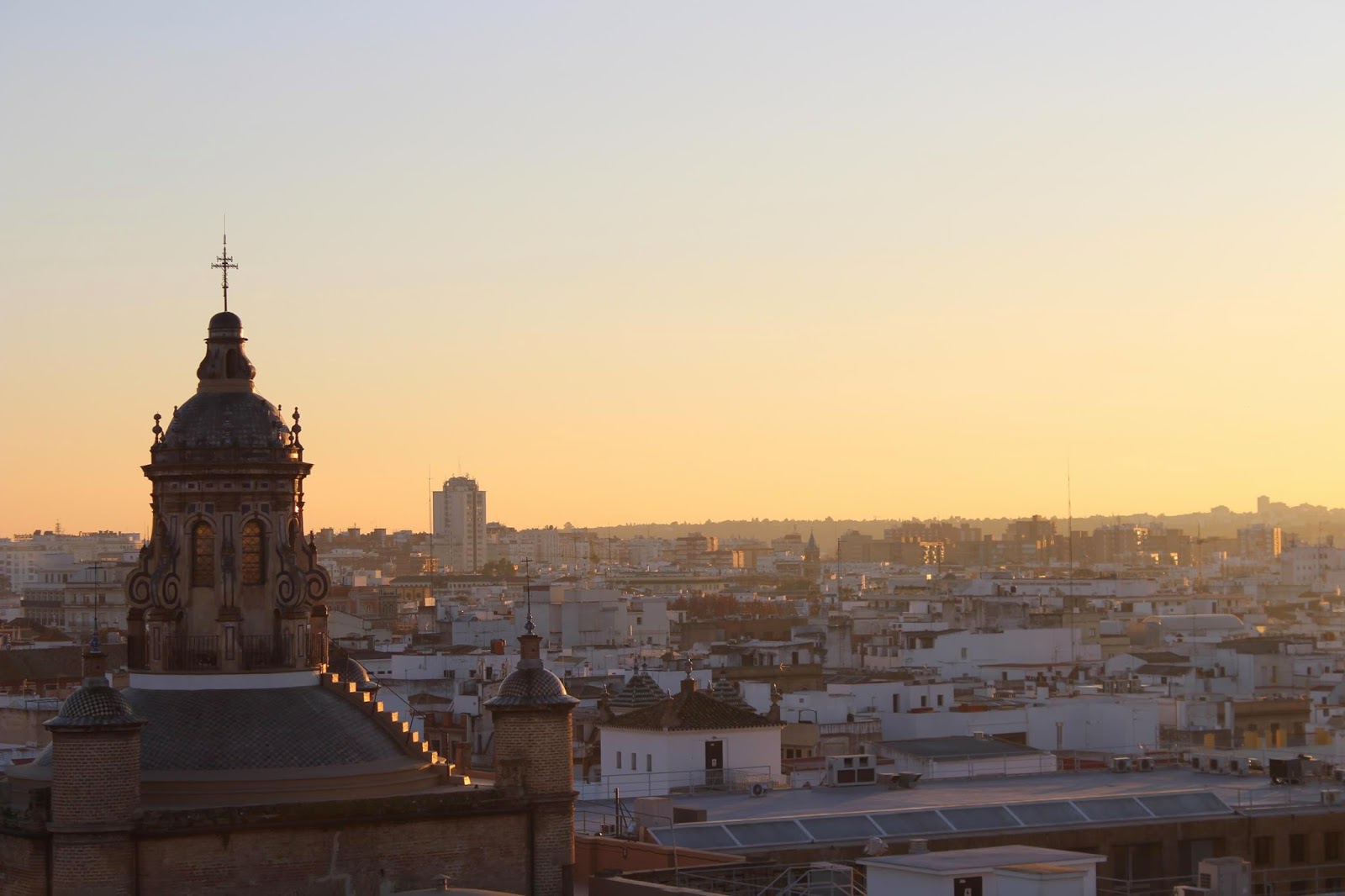 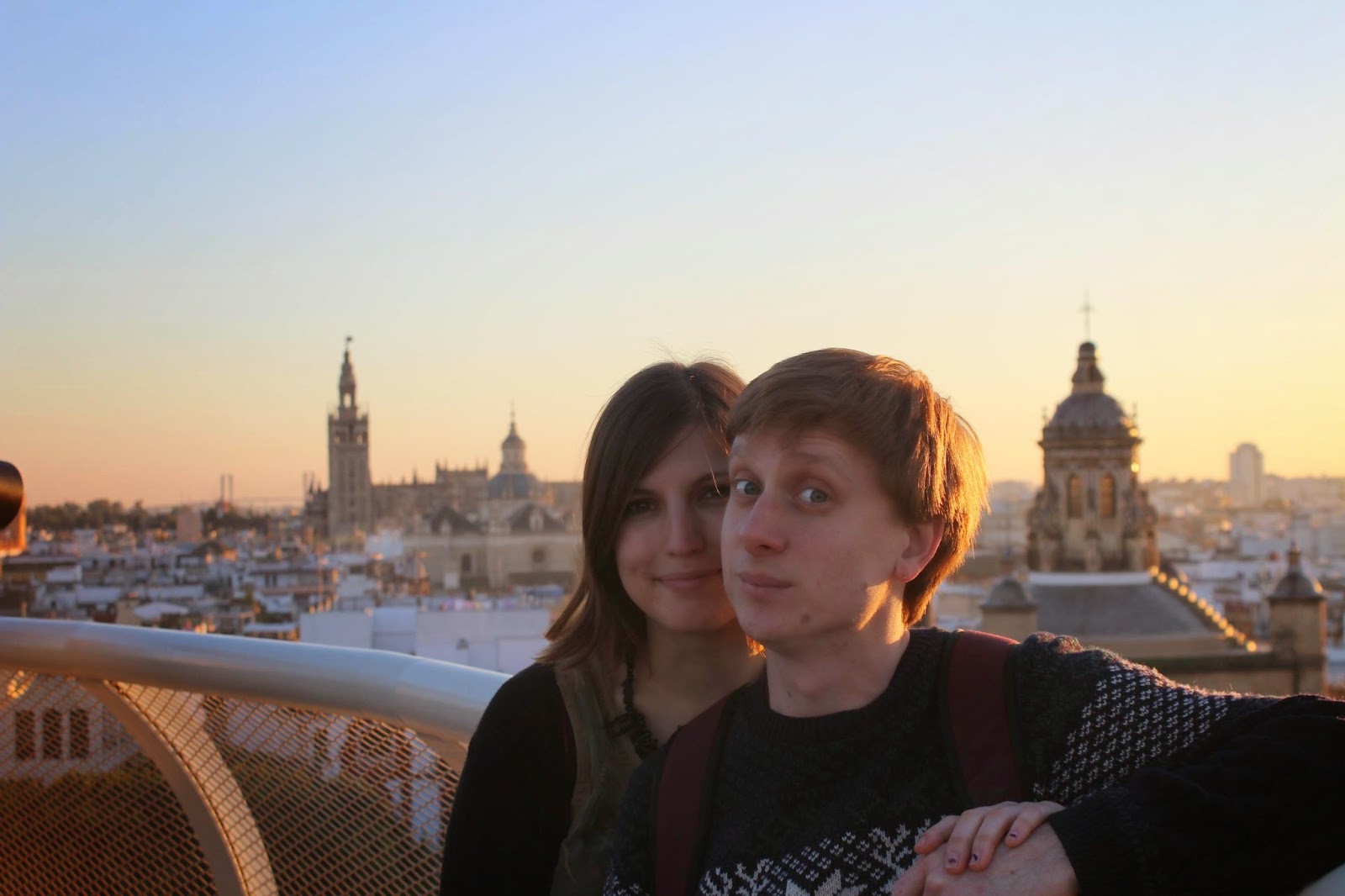 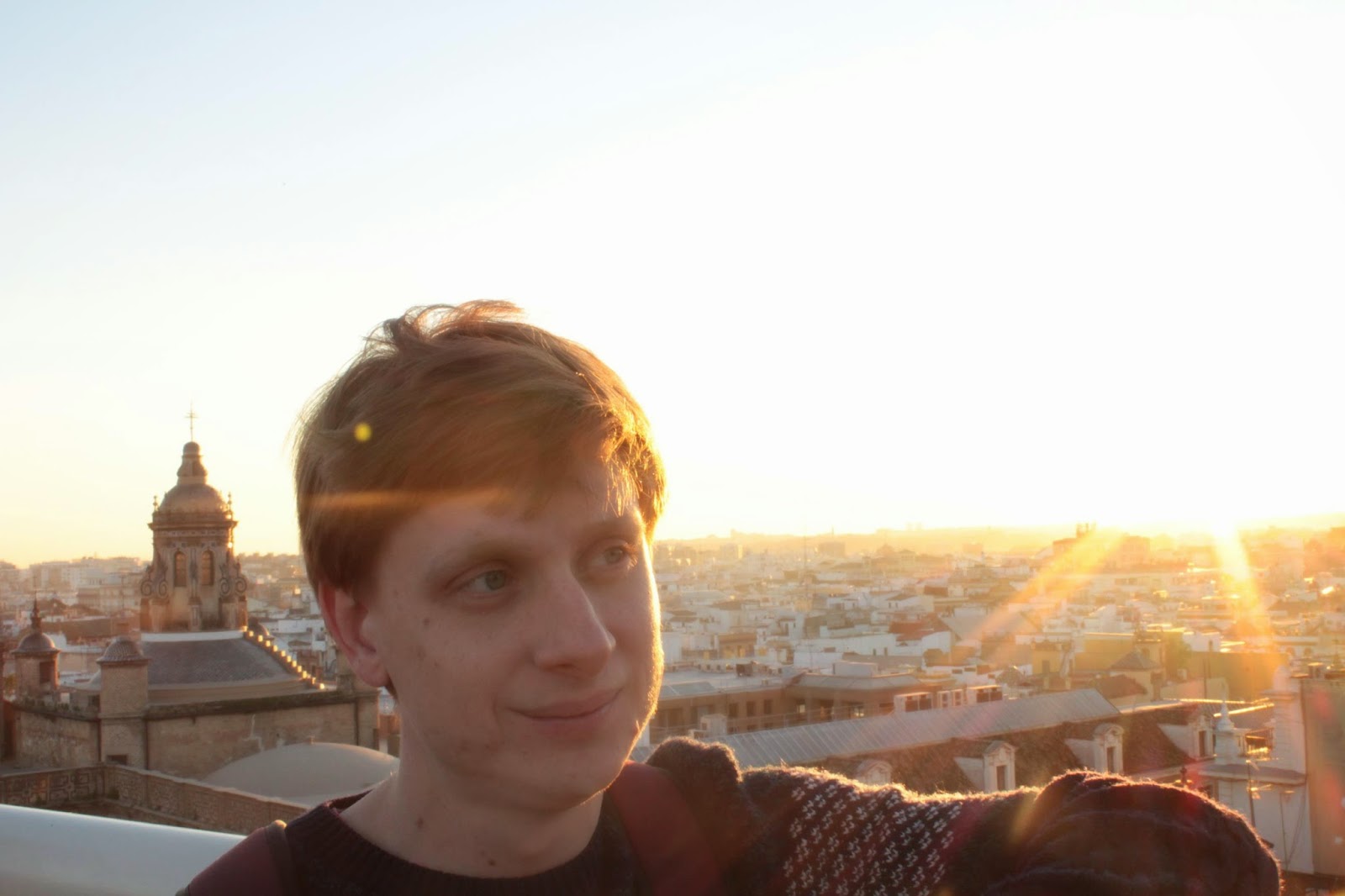 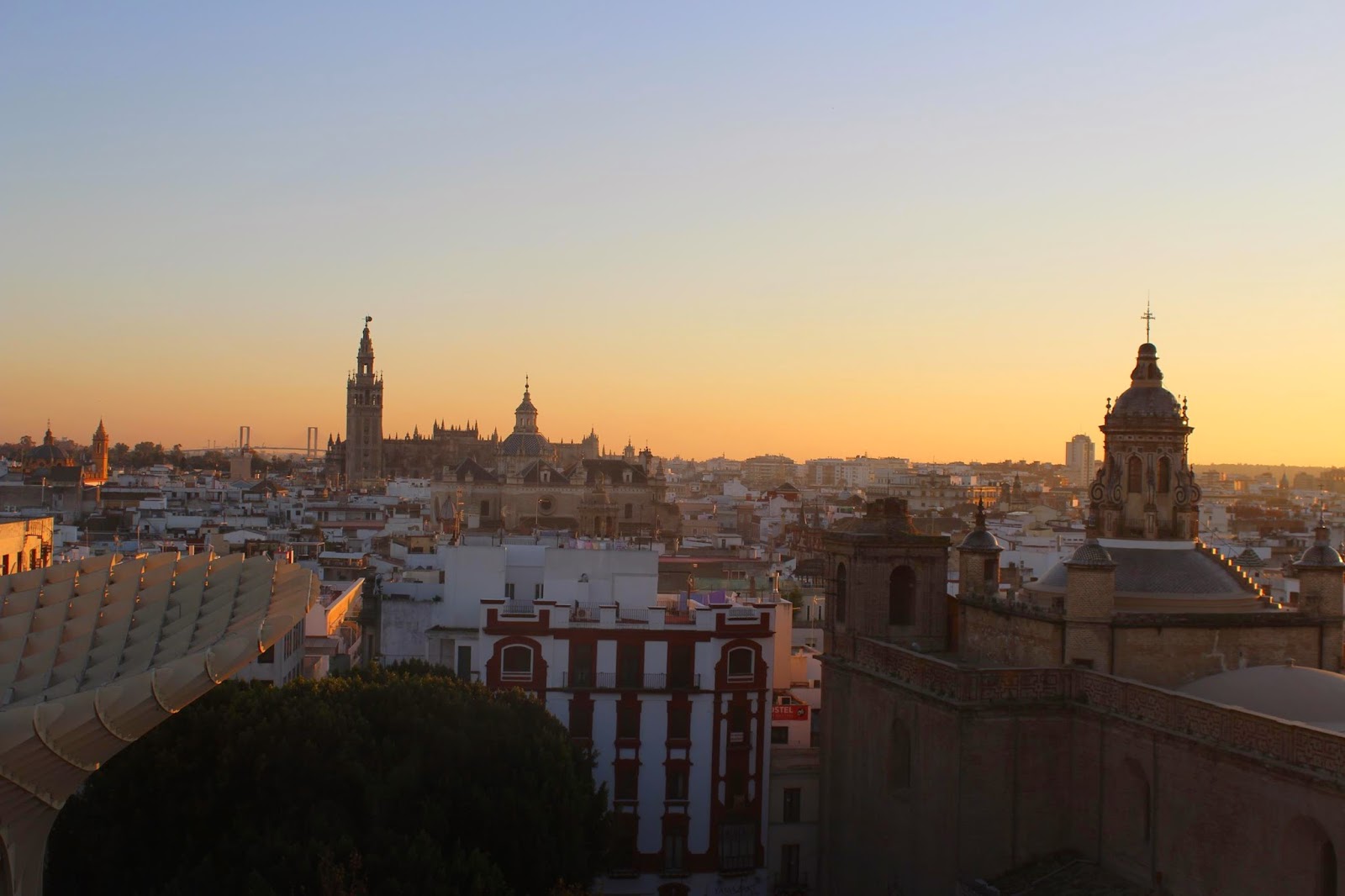 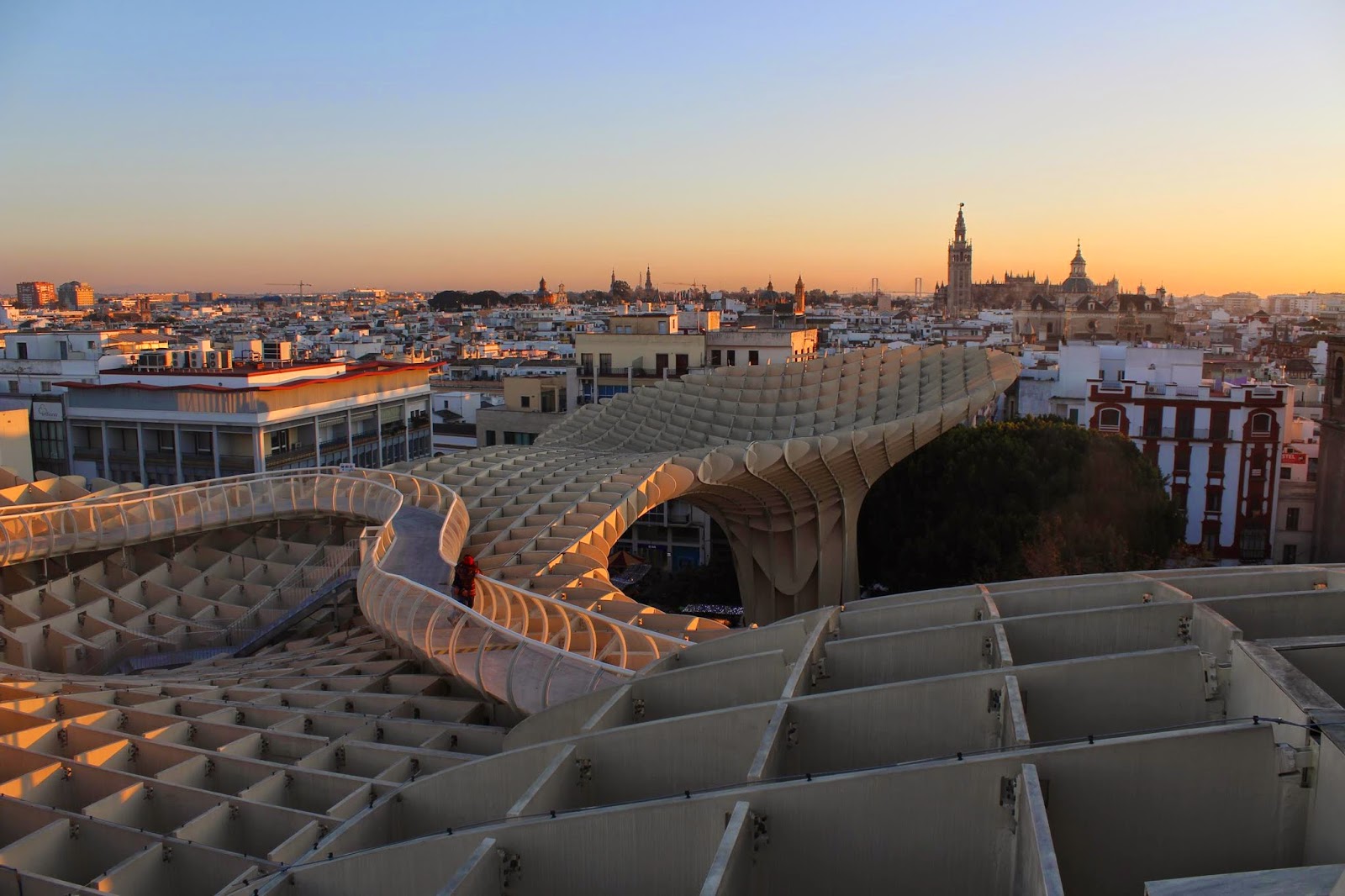 Ariel kindly agreed to take some photos of us… 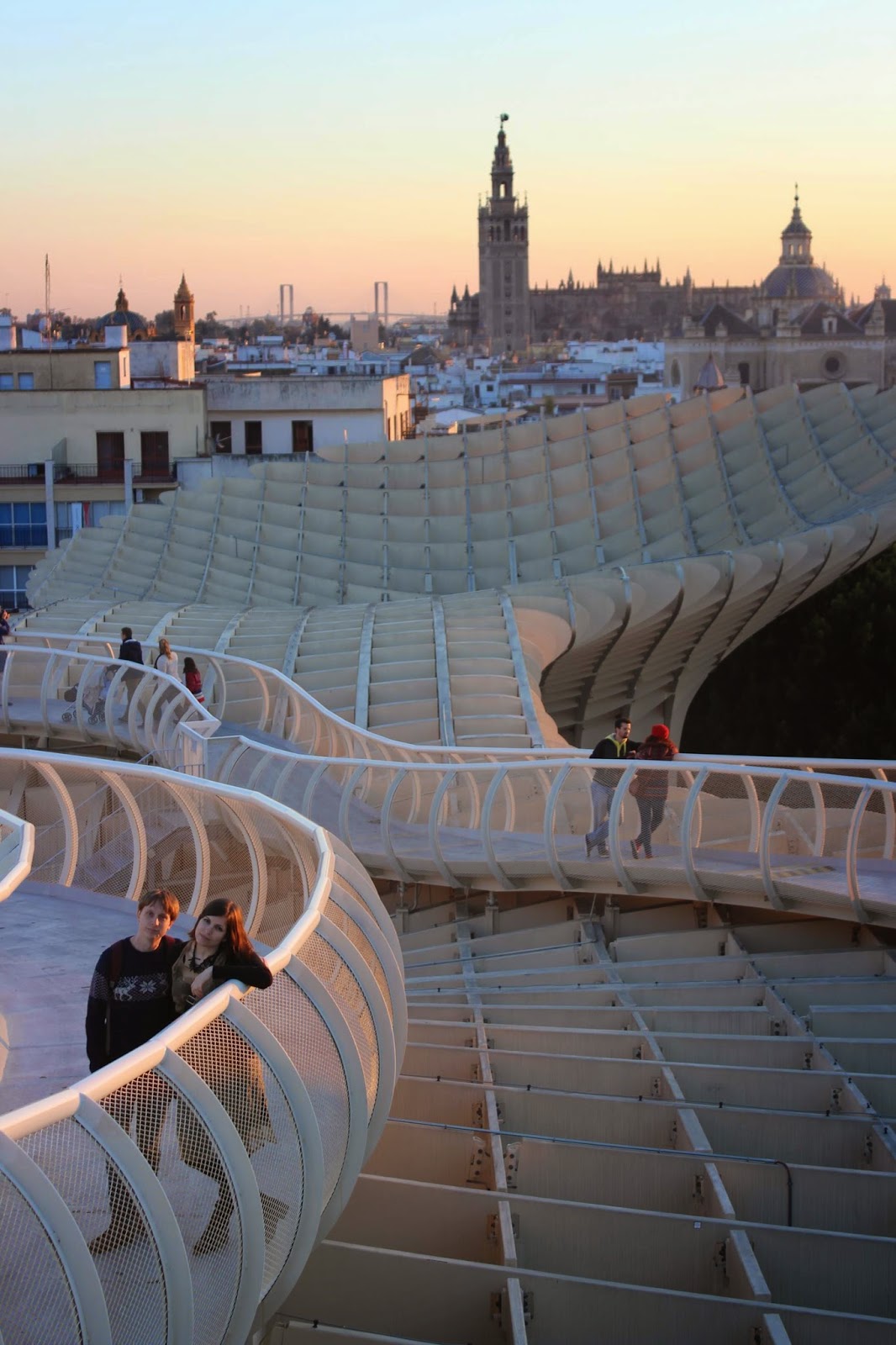 But not long after she took the camera, someone down below started playing an irresistibly chirpy version of the birdy dance. 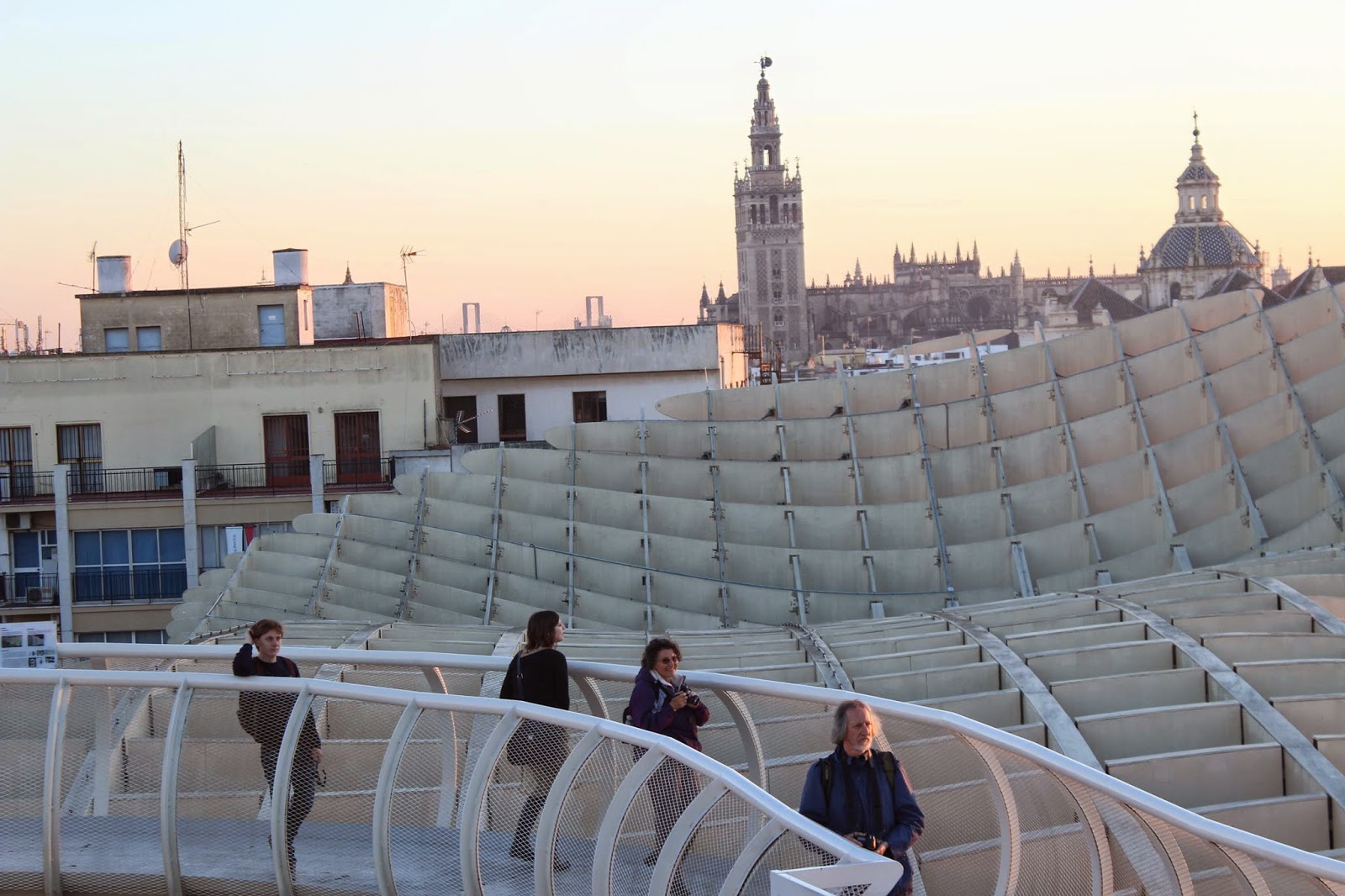 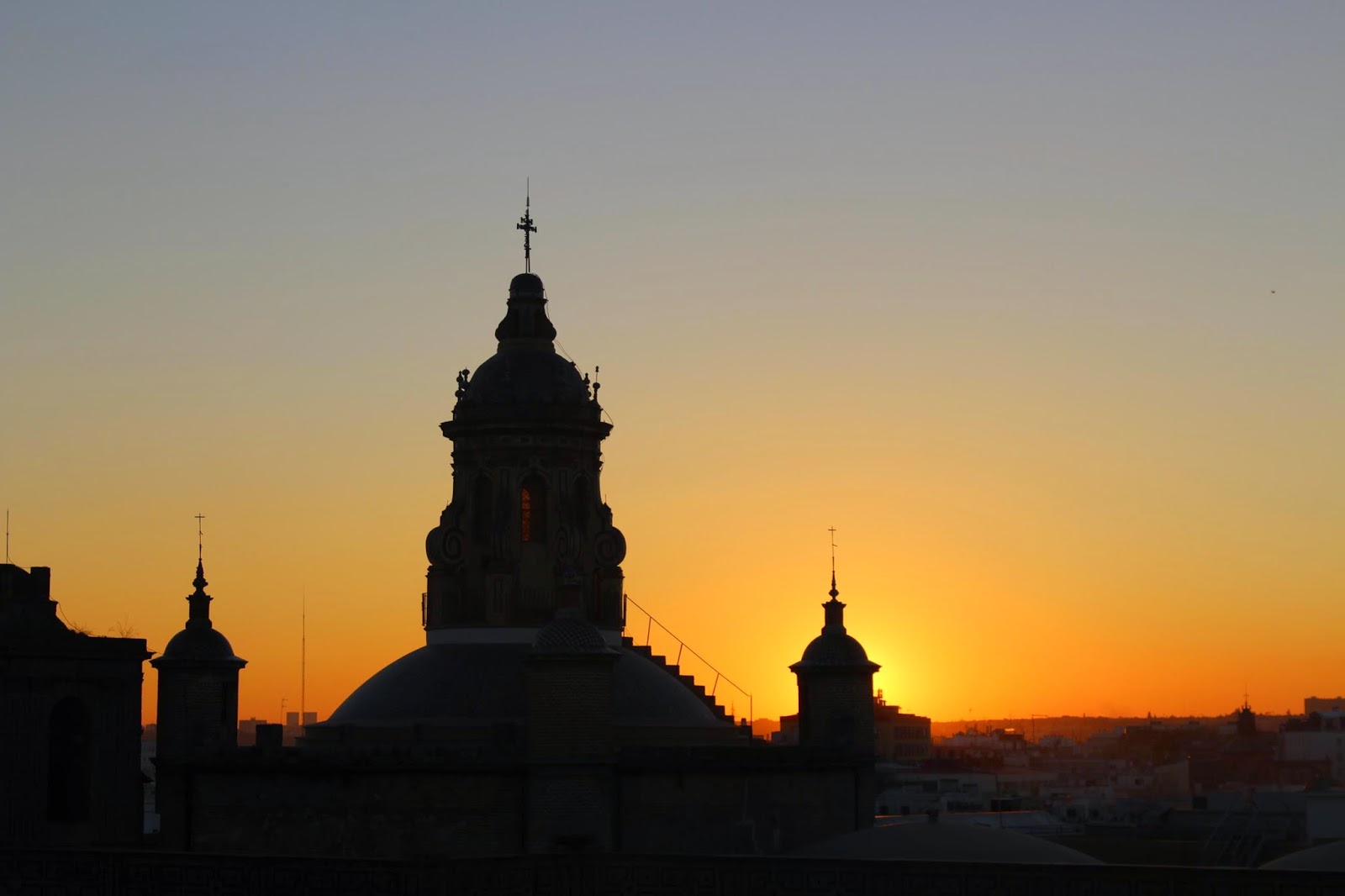 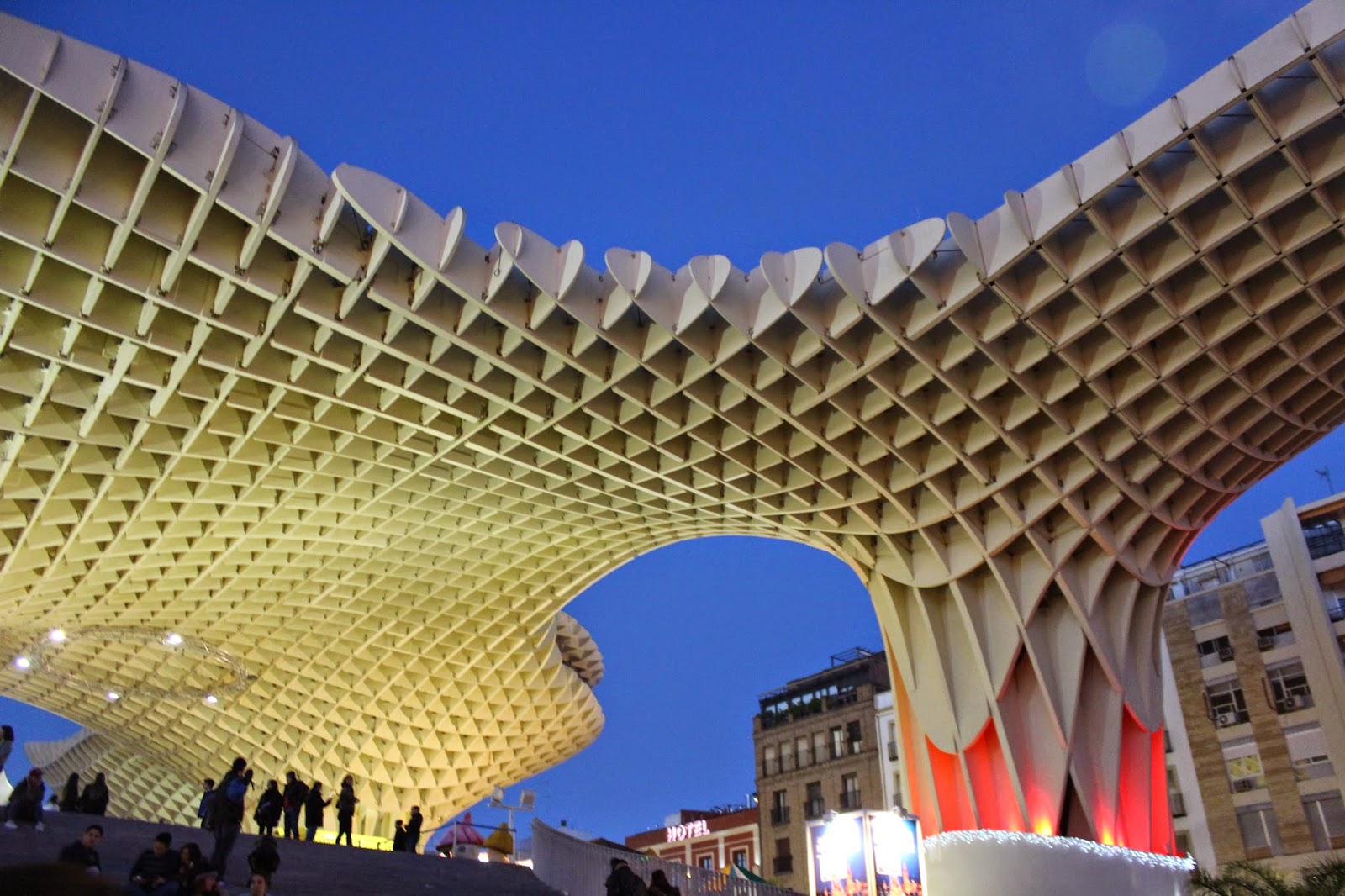 In the evening we went out for a very lovely Farewell Dinner at Cabo Roche. The food was really amazing, so I want to recommend it to anyone who is in Seville, but I also have to thank my aunt and uncle D and R, who very kindly gifted us the dinner as a lovely Christmas present.

For all the others who also sent us money for Christmas (/birthdays), thank you also. Andy and I have the idea that we will try to use it this year to have some sort of great experience (a dinner somewhere special, a concert, a play, an exhibition), and we’ll get our blog on to show you what you kindly bought us.

On to the food.

Mum ordered a starter, which was a super creamy over-the-top-in-the-best-way flavoured pate.

Here it is trying to imitate Australia: 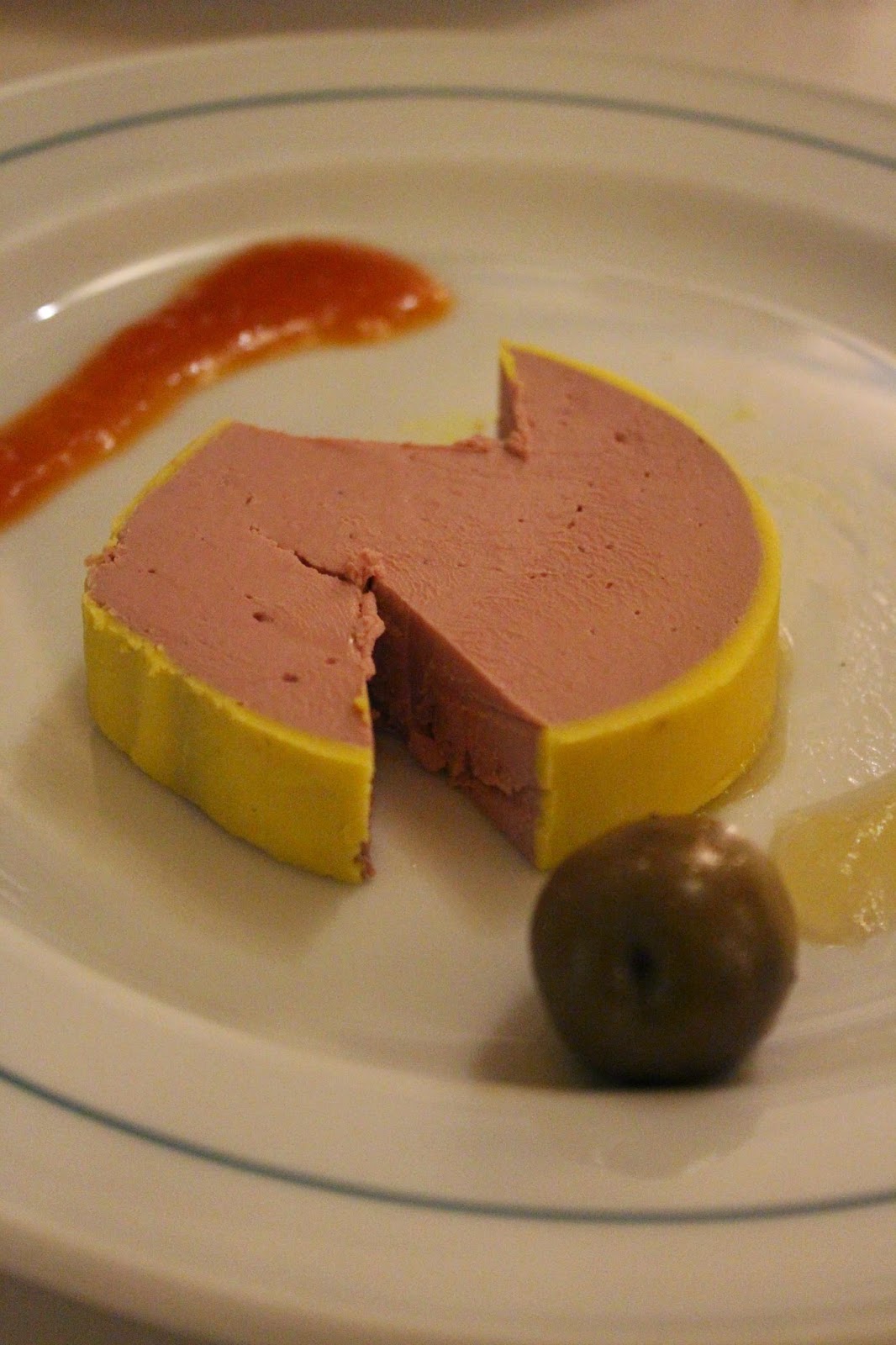 Andy tried to order some sort of seafood, but they didn’t have it, so instead the waiter recommended him something guaranteed to be delicious!

We didn’t know what exactly it was going to be, so there was some surprise when a spoon turned up… 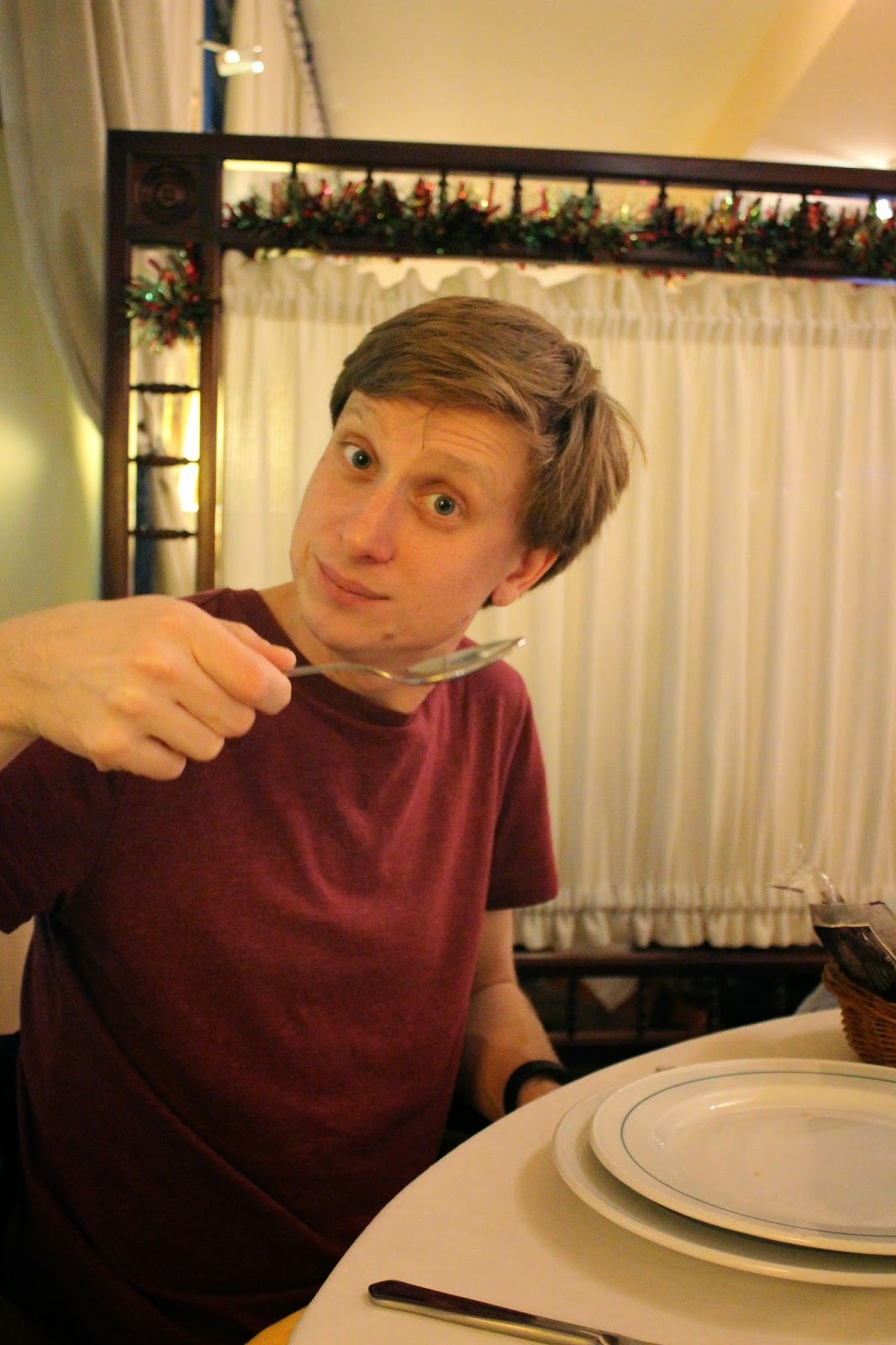 .. and then, this beauty. Creamy scallops served in their own shell. 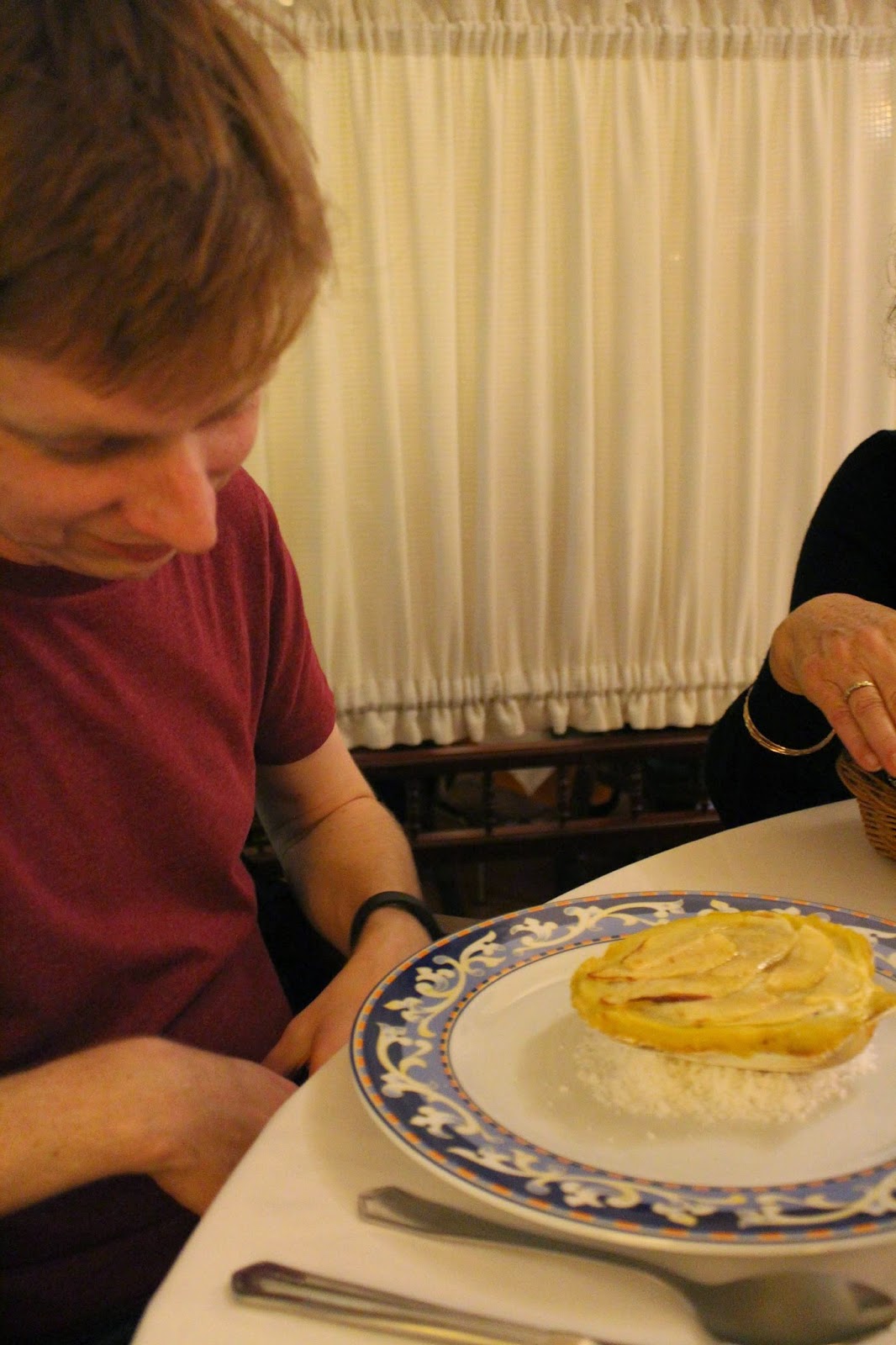 From now on, he declared, I’m going to eat all of my food out of shells. 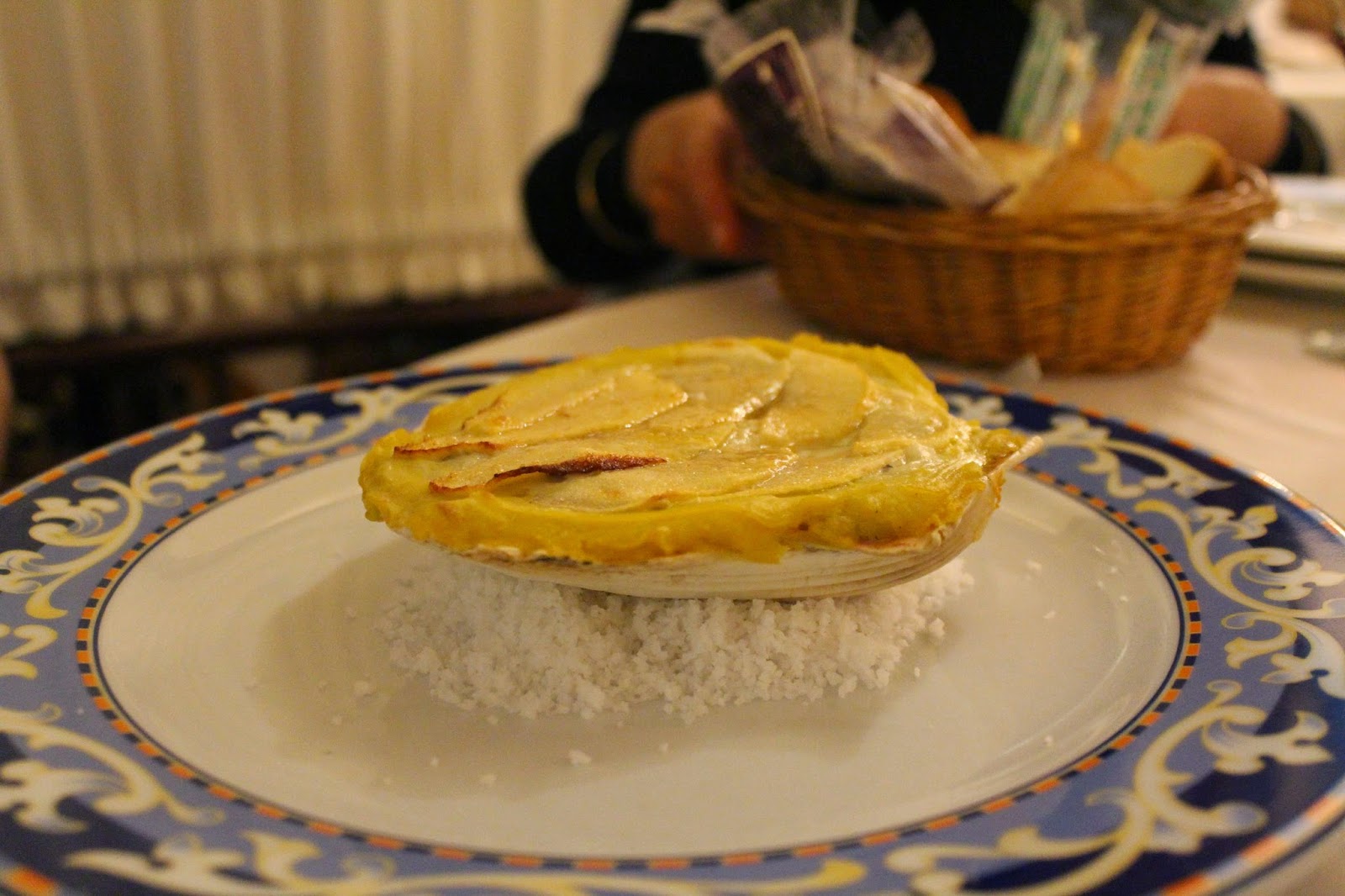 As an additional word about the restaurant, the menu was in Spanish, which is a great sign if you’re looking for something not too touristy!, but might help you understand our surprise at the scallop dish.

Don’t let this deter you though- even if you don’t speak the language- you should definitely give Cabo Roche a visit. You can work out half of the menu with a touch of common sense, the waiters we had were extremely helpful and willing to play a game of charades when in came to any question, and I suspect that anything you can’t manage to decipher will be equally delicious anyway! 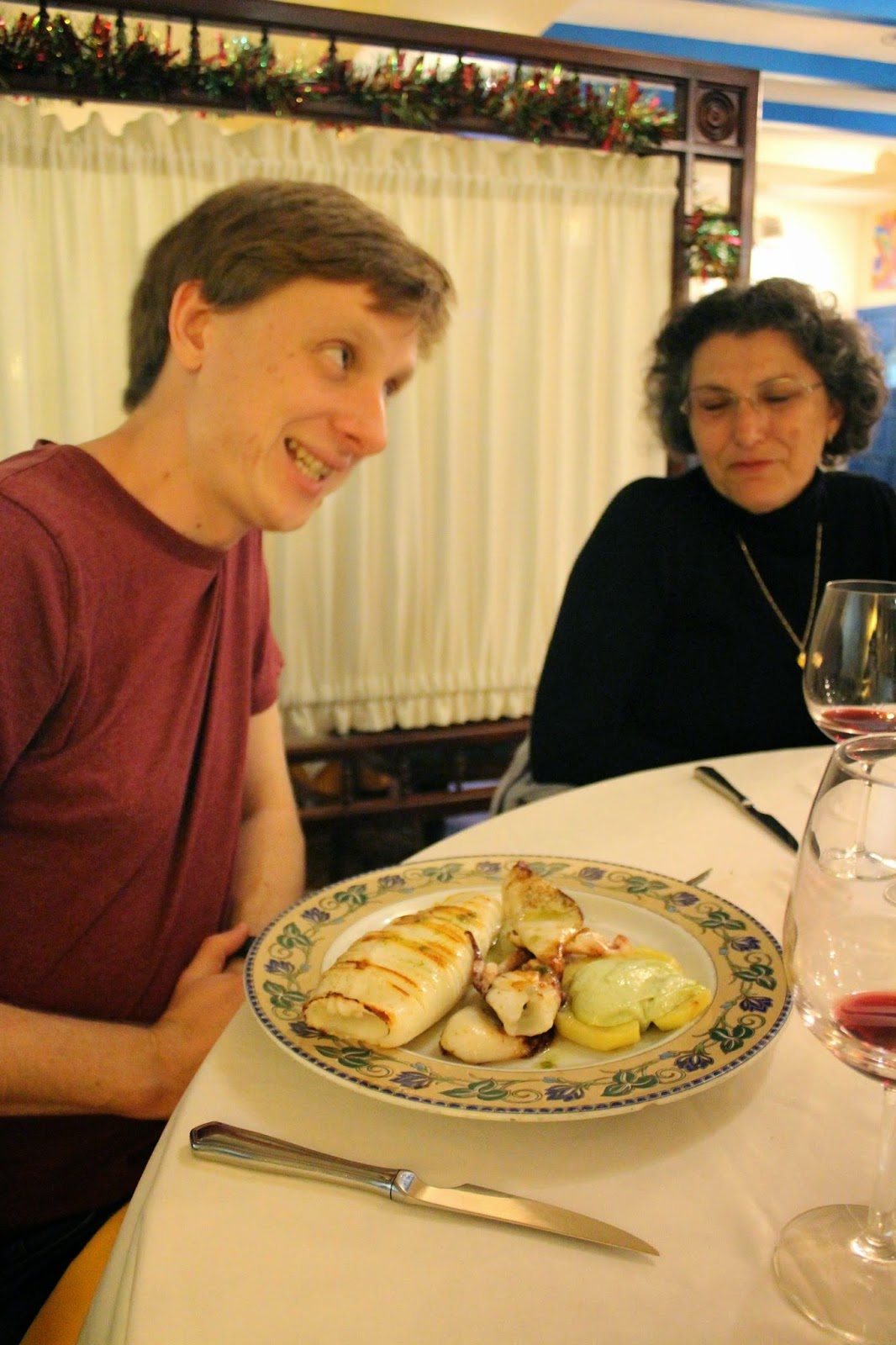 Part of the game of charades we played was in regard to the level of cooking Ariel and I wanted for our tuna steaks. She went with medium, I used my hands to indicate something less than medium.

Which, as it turns out, is what you should get if you visit. Get the tuna. Get it medium rare (or rarer!)

It was buttery and fresh and red in the centre.

I don’t think it’s just the Kartoffel Fever talking when I say that it was easily some of the best fish I’ve ever eaten. Andy’s Calamari was also beautifully cooked, and the man is a known Squid Scoffer, but even he had to concede my victory in the ordering.

I generously allowed him a fraction of my fish in return for some of his tentacles. 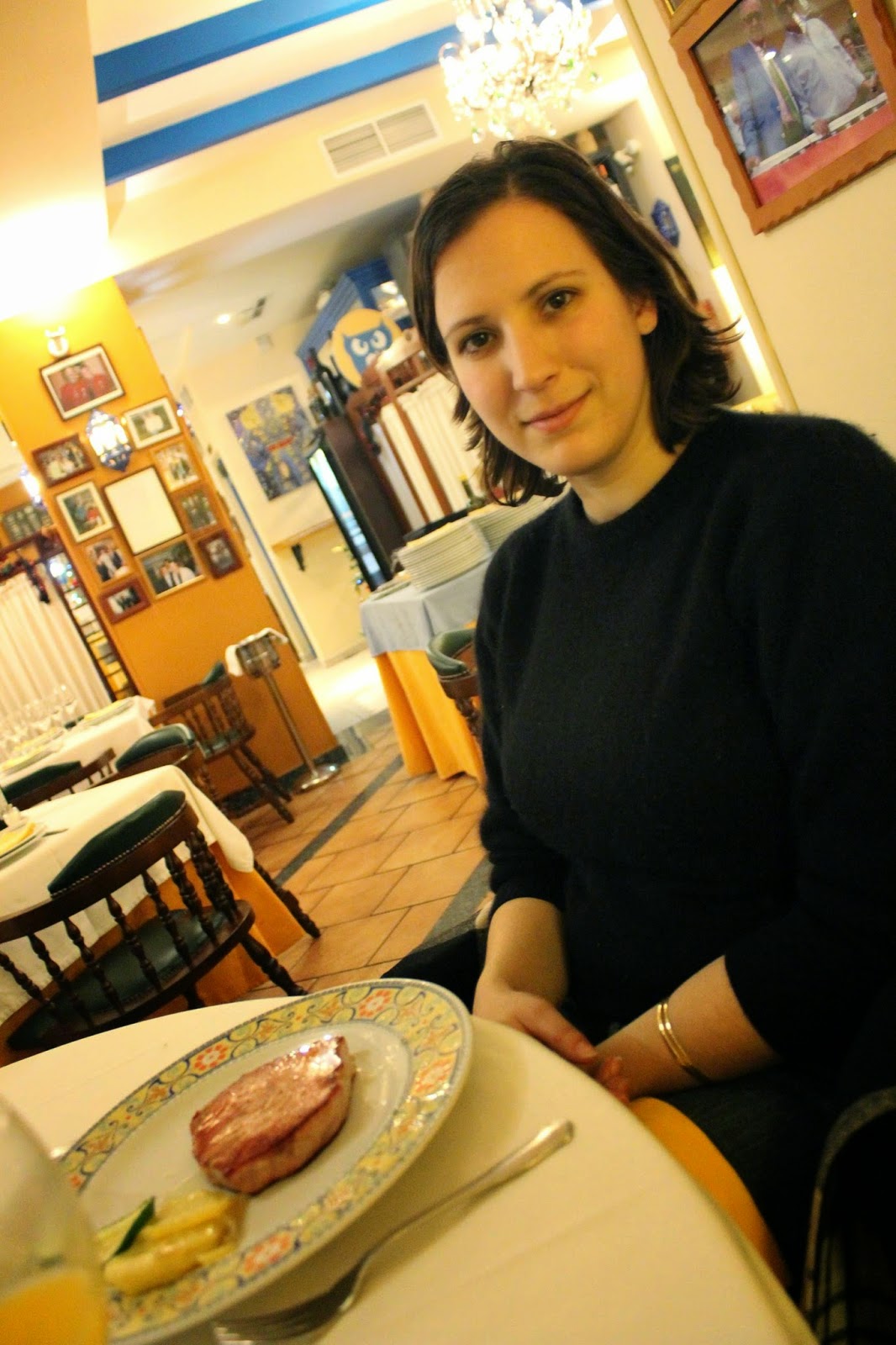 And that was it, except that I felt, given that I hadn’t had a starter, that I deserved some pudding! 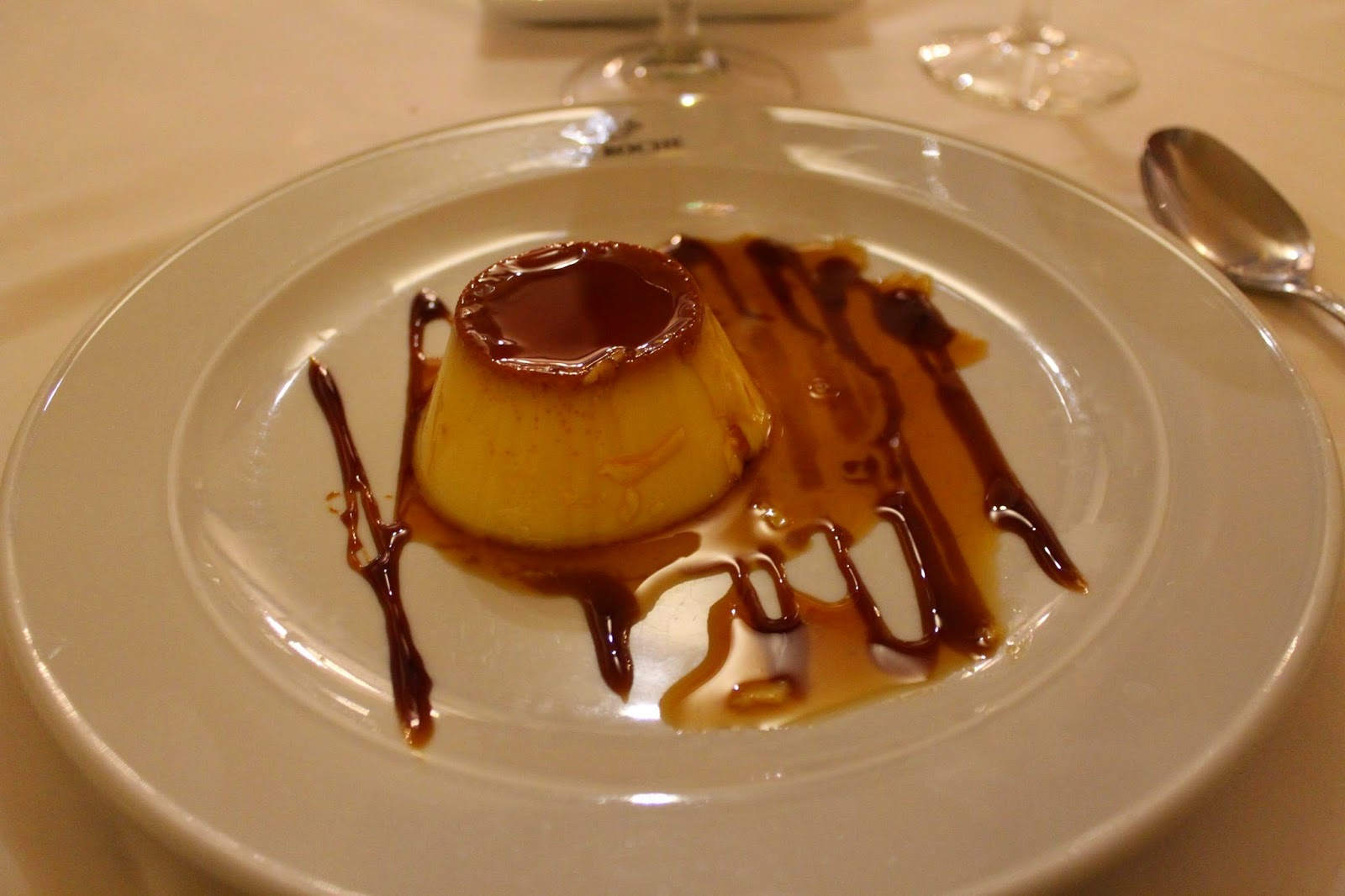