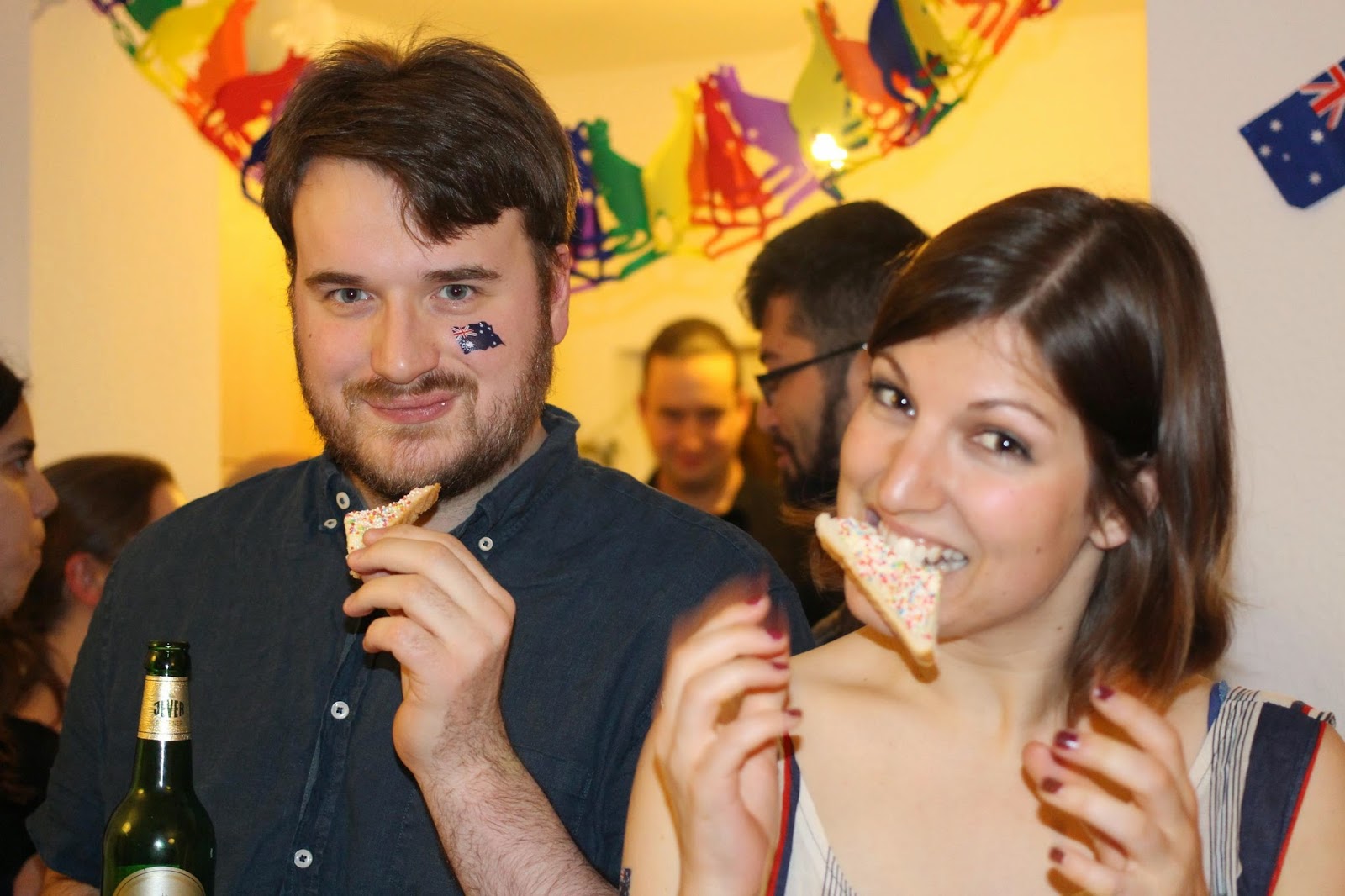 Hi Everyone, and Happy Straya Day for yesterday.
I was having a discussion with a friend about how much more nationalist you become when you’re living overseas. This is particularly true for Australia, because we’re all a mongrel mix of multiple nationalities. Back there, Andy is a Polish-German-Irish-Chinaman and I’m some sort of Convict-not Egyptian-not quite Maltese-Scottish-Spaniard.

But the reality is we’re not. We’re STRAYAN.

Here’s what we made.

First up (after the Fairy Bread)-Pavlovas- bravely stolen from the Kiwis in a celebration of our nation’s convict roots. 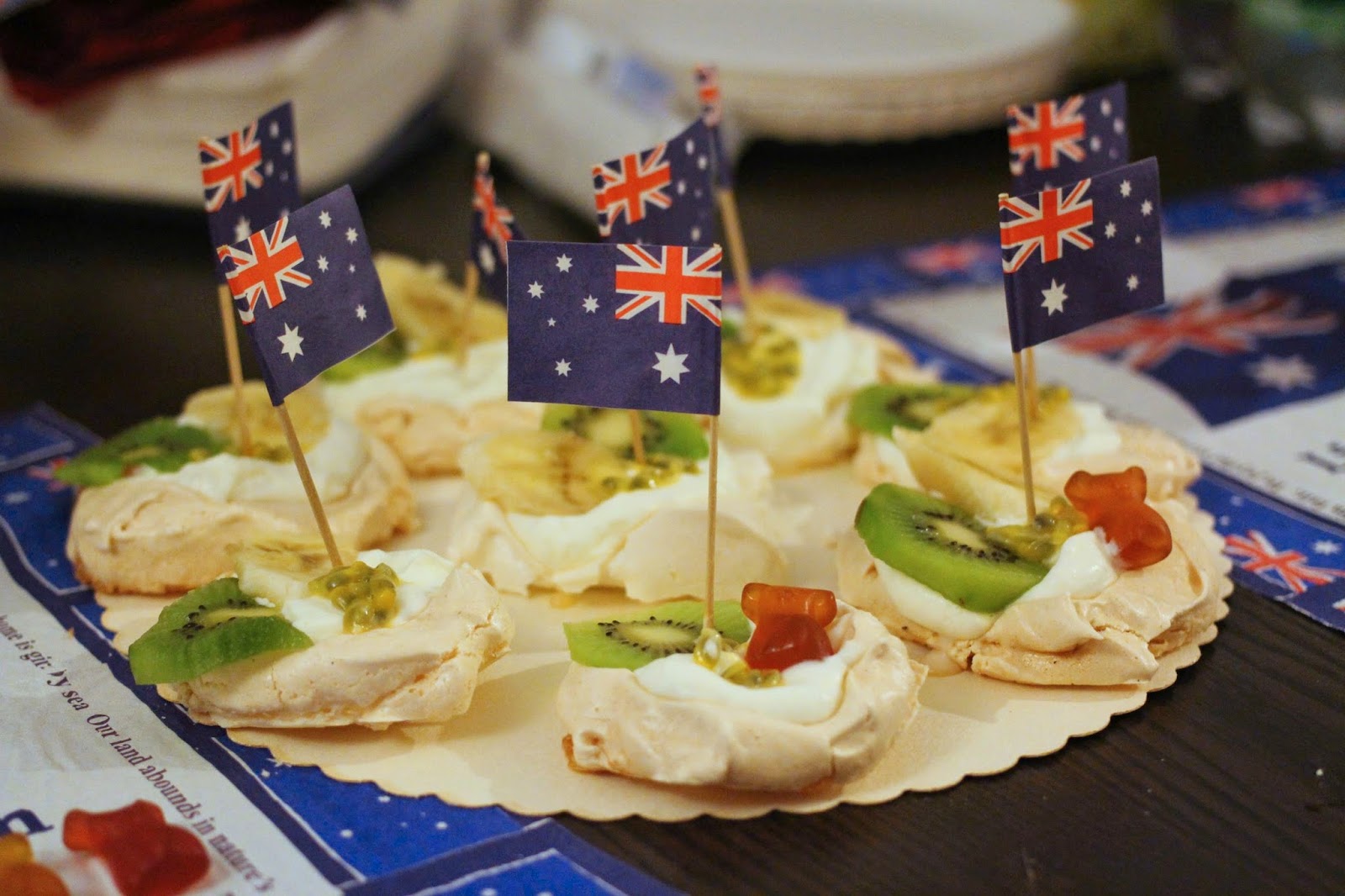 Pavlova is pretty simple to make- it’s just a giant meringue after all. But for those keen to give it a shot, I took the recipe from Taste.com.au- it’s here. Of course, I can’t seem to work out where the Germans keep their caster sugar, so I just went with the ordinary stuff.

Plus of course I miniaturised them, and stuck Bundeberg Ginger Gummi Koalas on top for that nice fusion of Aussie and Deutsch (they are the Gummi Kings- thing Haribo)

I also made Lamingtons, which I think I am the most proud of. Again, the recipe was from Taste.com.au- here. Again, super  easy. My scales ran out of batteries and I just use a mug instead of a cup- which I thought would cause problems with the sponge but didn’t- plus I was too lazy to weigh out the icing mix- but they all turned out pretty great.

Five stars (or, at least, five lamingtons eaten) by another visiting Aussie friend! 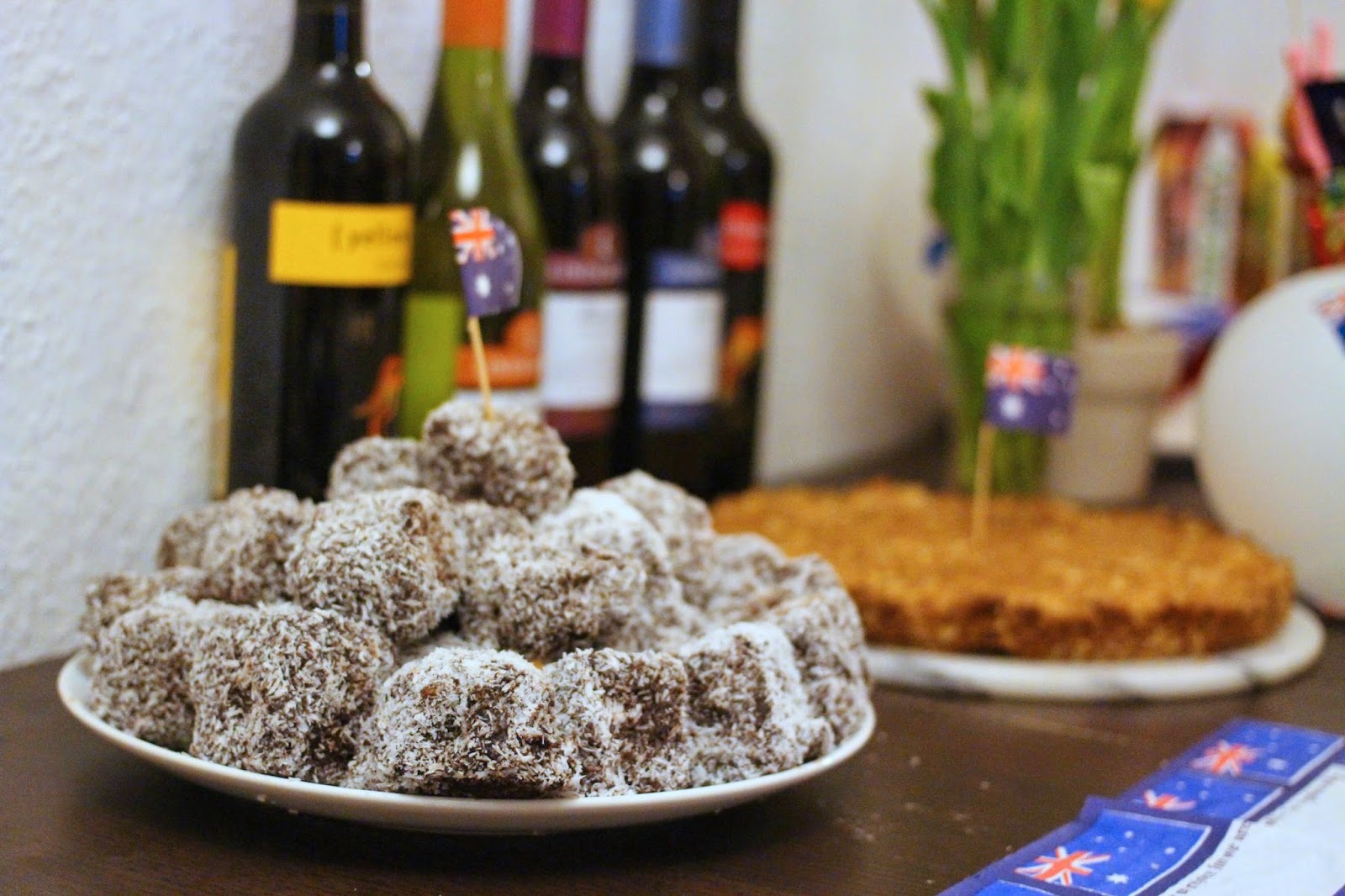 Of course, the making process is very, very messy! 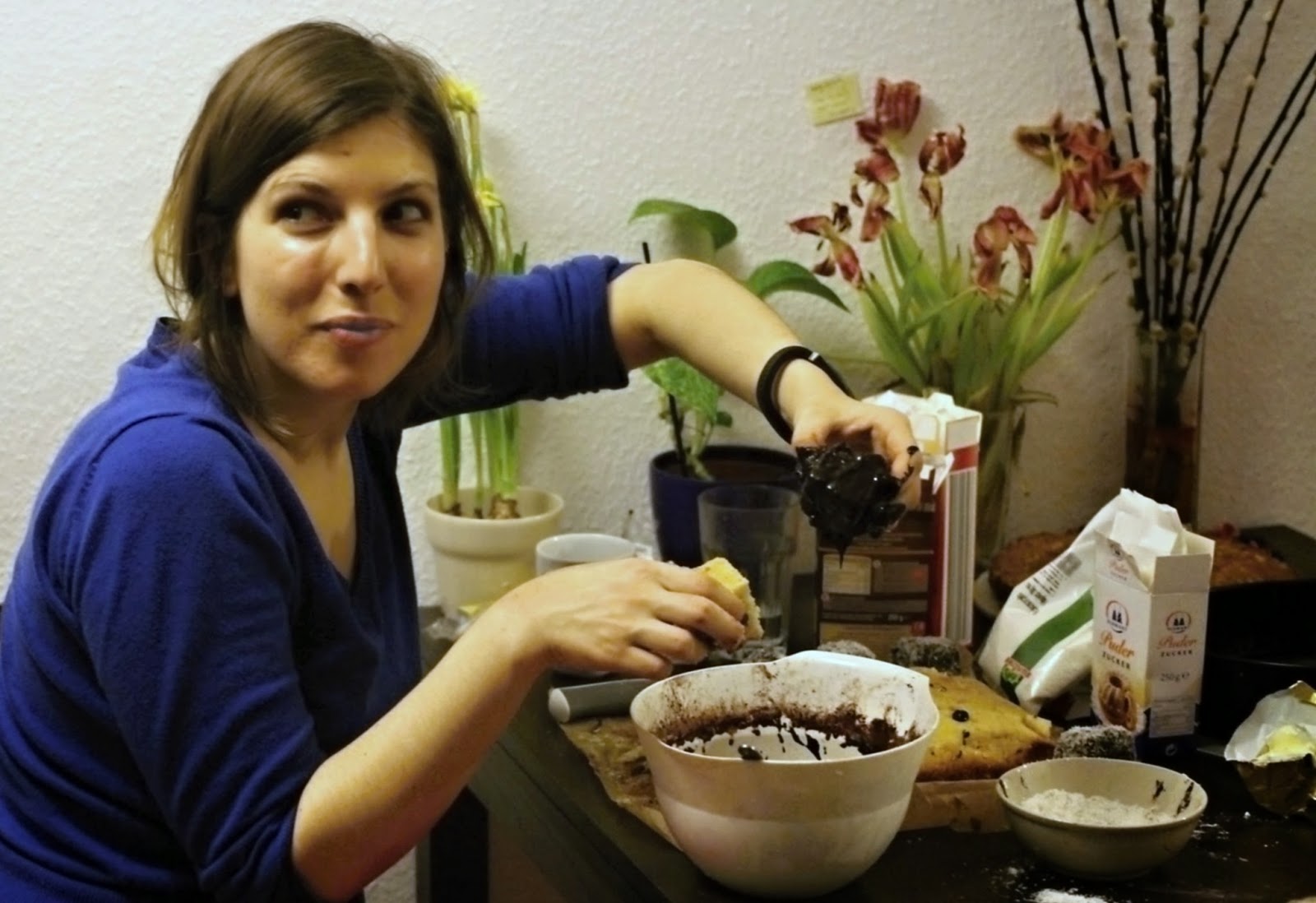 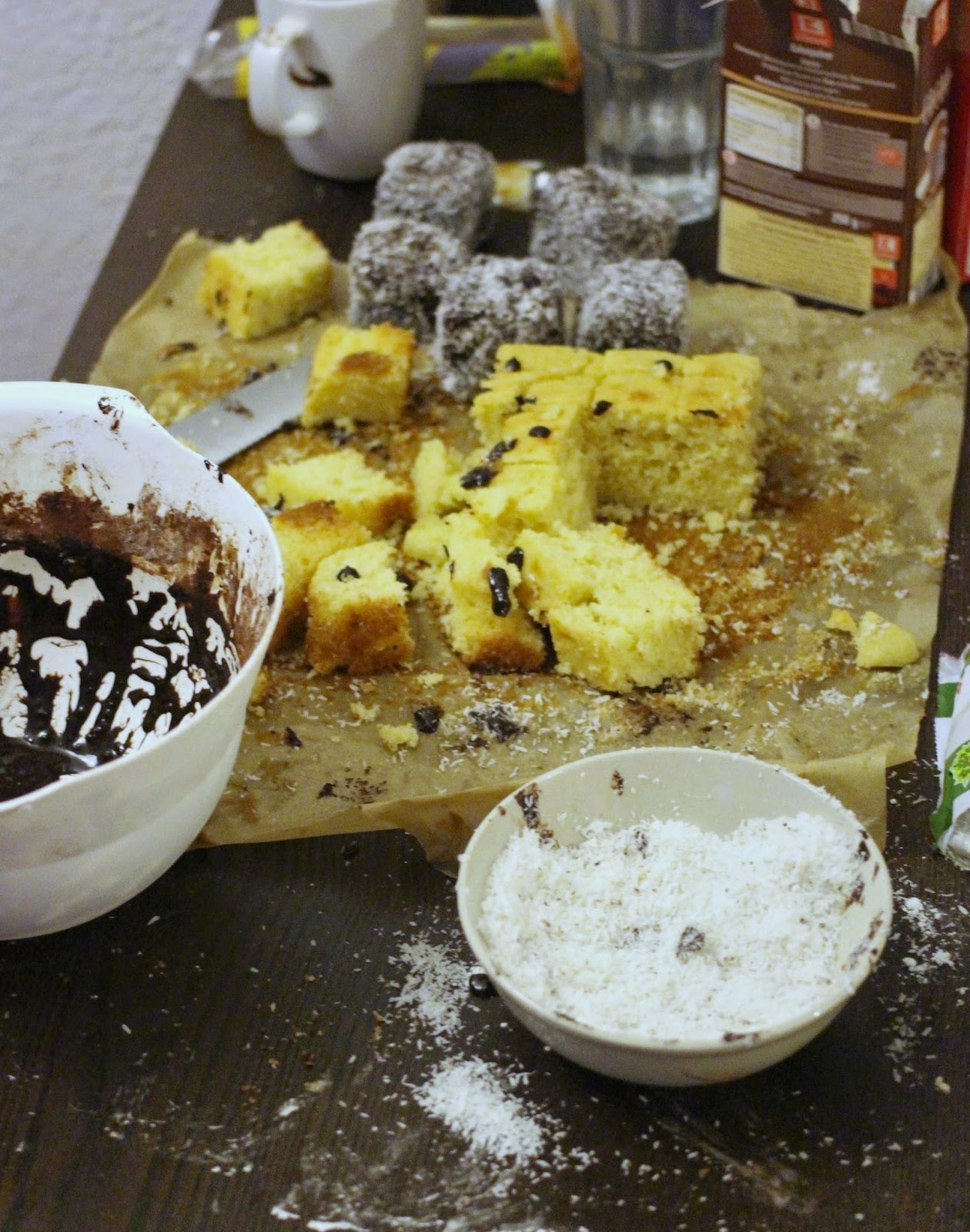 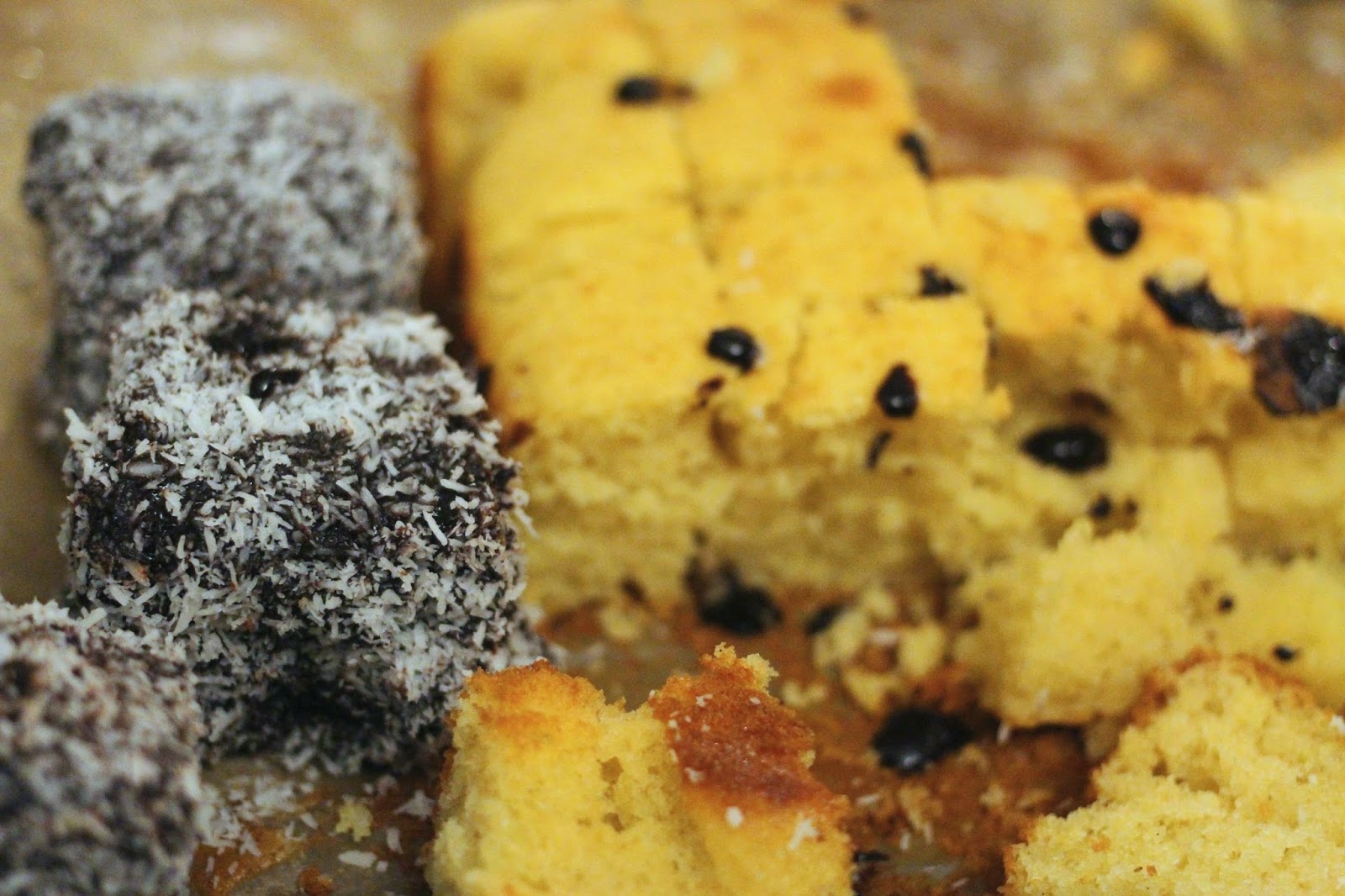 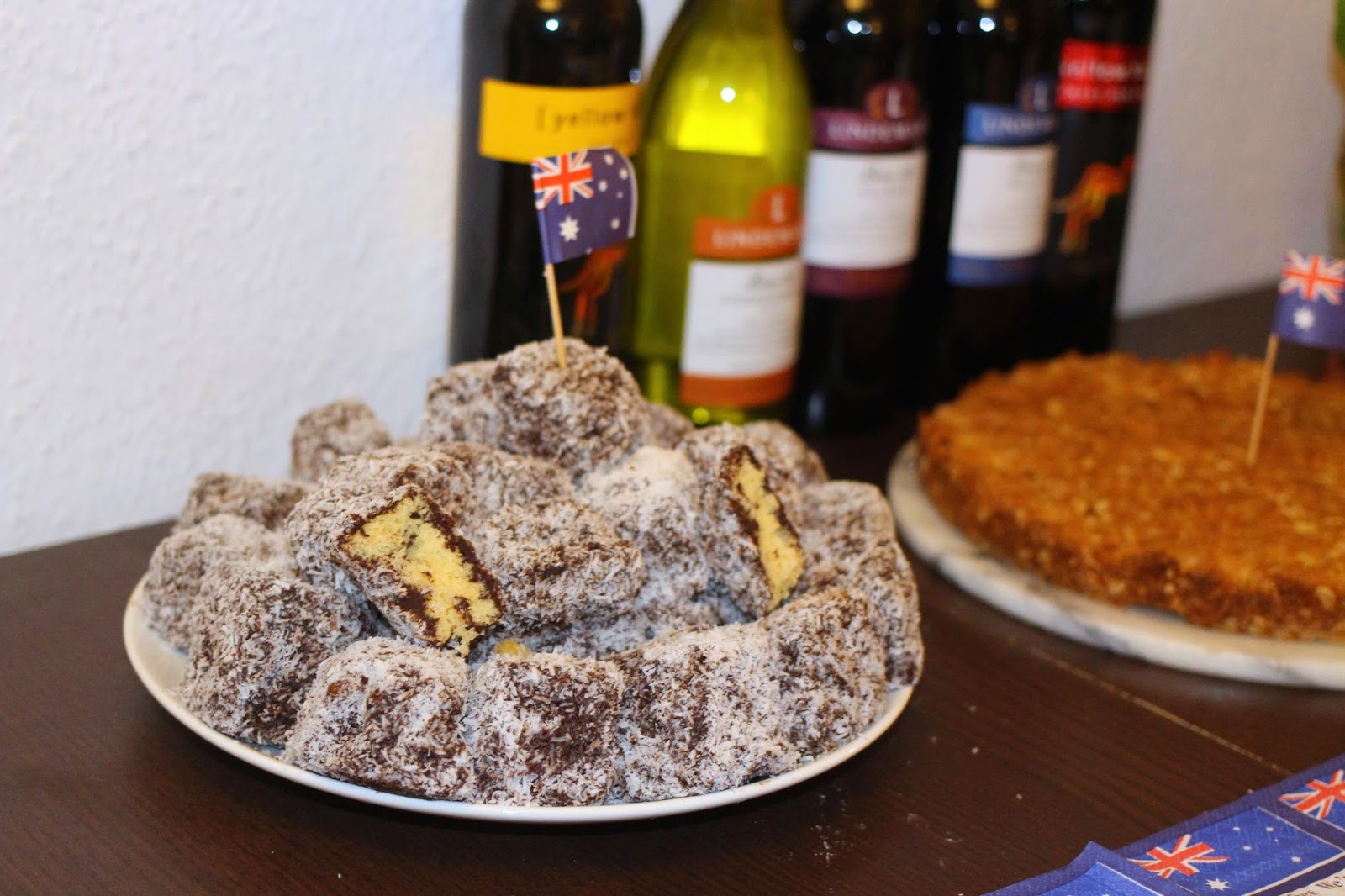 In the background you can see an Anzac slice. I can’t remember which recipe I used- but make sure you include ‘chewy’ in your recipe search. Because Germans seem to morally object to brown sugar, the flavour was a little less caramelized than normal. Otherwise, ok.
A couple of days ago, we were looking through a list of Aussie foods, and ‘Vanilla Slice’ popped up. Which seemed like a great way to use up all the egg yolks left from the Pav. 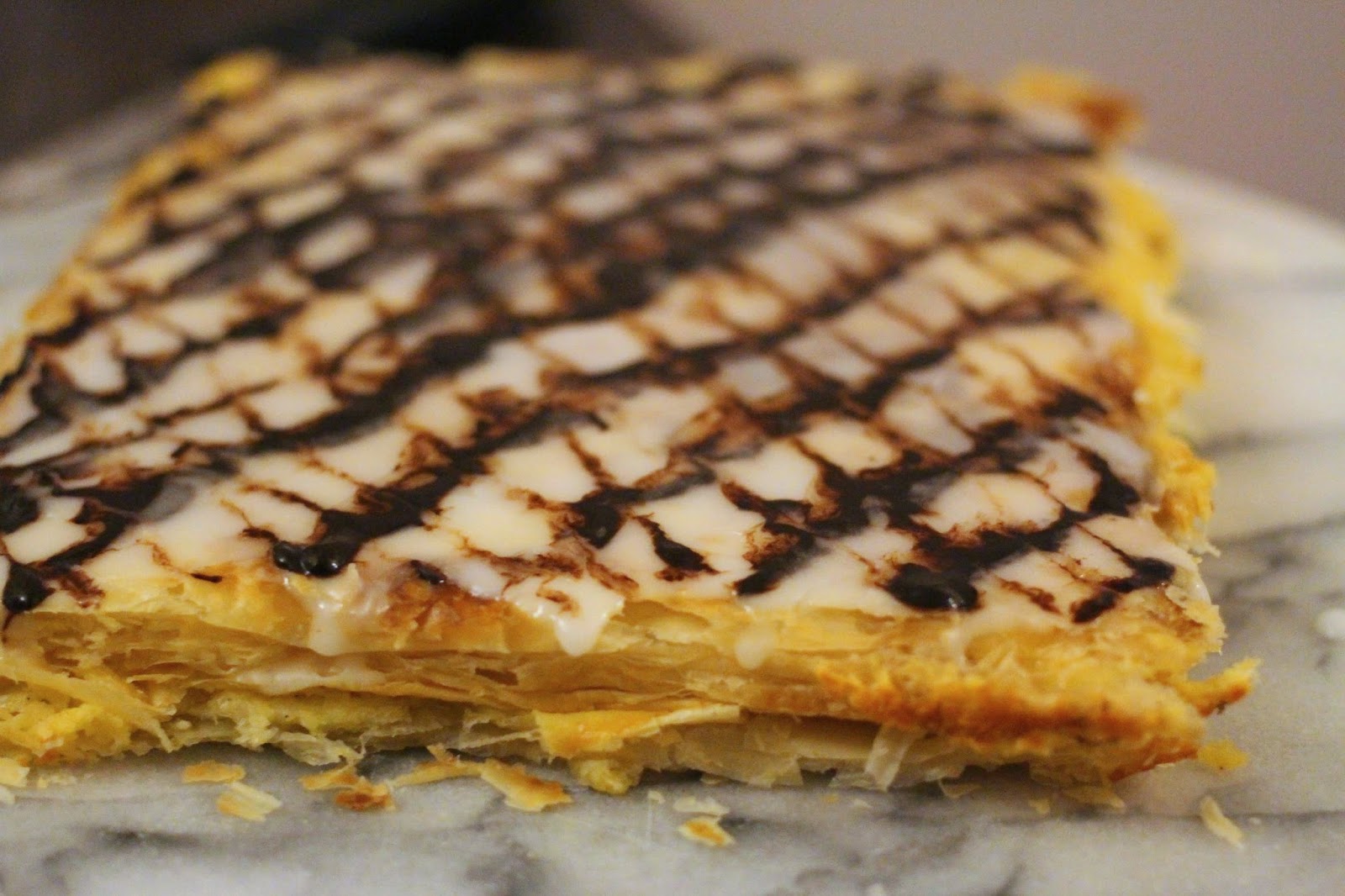 I actually had trouble finding one that used eggs and not just custard flour and corn flour. In the end I went here, but used store bought pastry instead of home made, and included 6 egg yolks (the number I had left). I also put in lots of vanilla, straight from the pod. And in the end, because I undercooked the custard (I always undercook my custard- no patience), and it became clear that it would never set (even after Balcony 0 degree treatment), I placed both pre-crisped pastry sheets in a tray and poured the custard over, then ovened that sucker for a bit (10-15 min?) until it set, before eventually sandwiching the two cooled halves together. 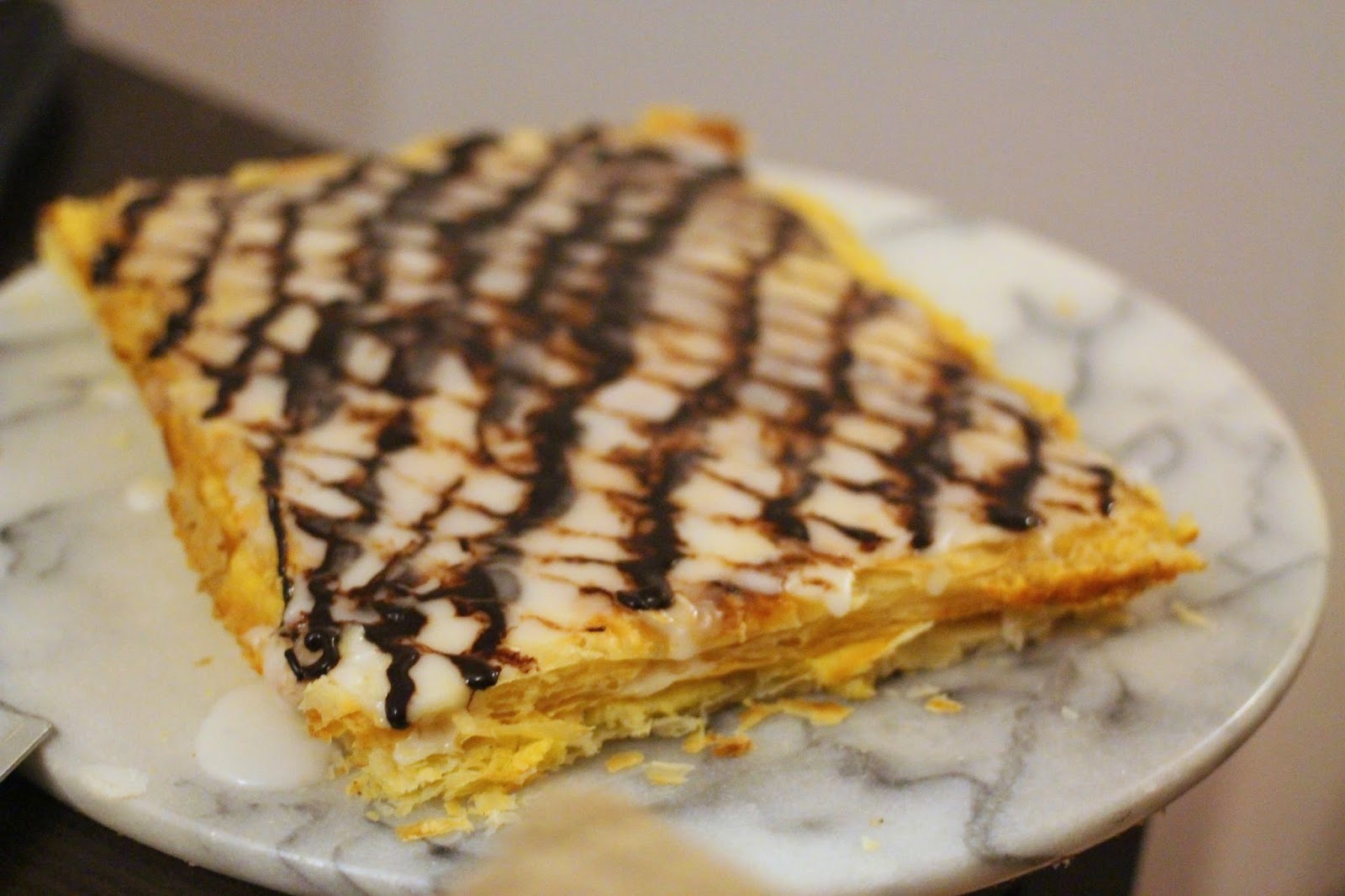 It was pretty great, but probably you could do with some more filling for aesthetics?

One of the greatest things was a half-suitcase worth of snacks and candy which came over the seas from Australia- gifted by my family. 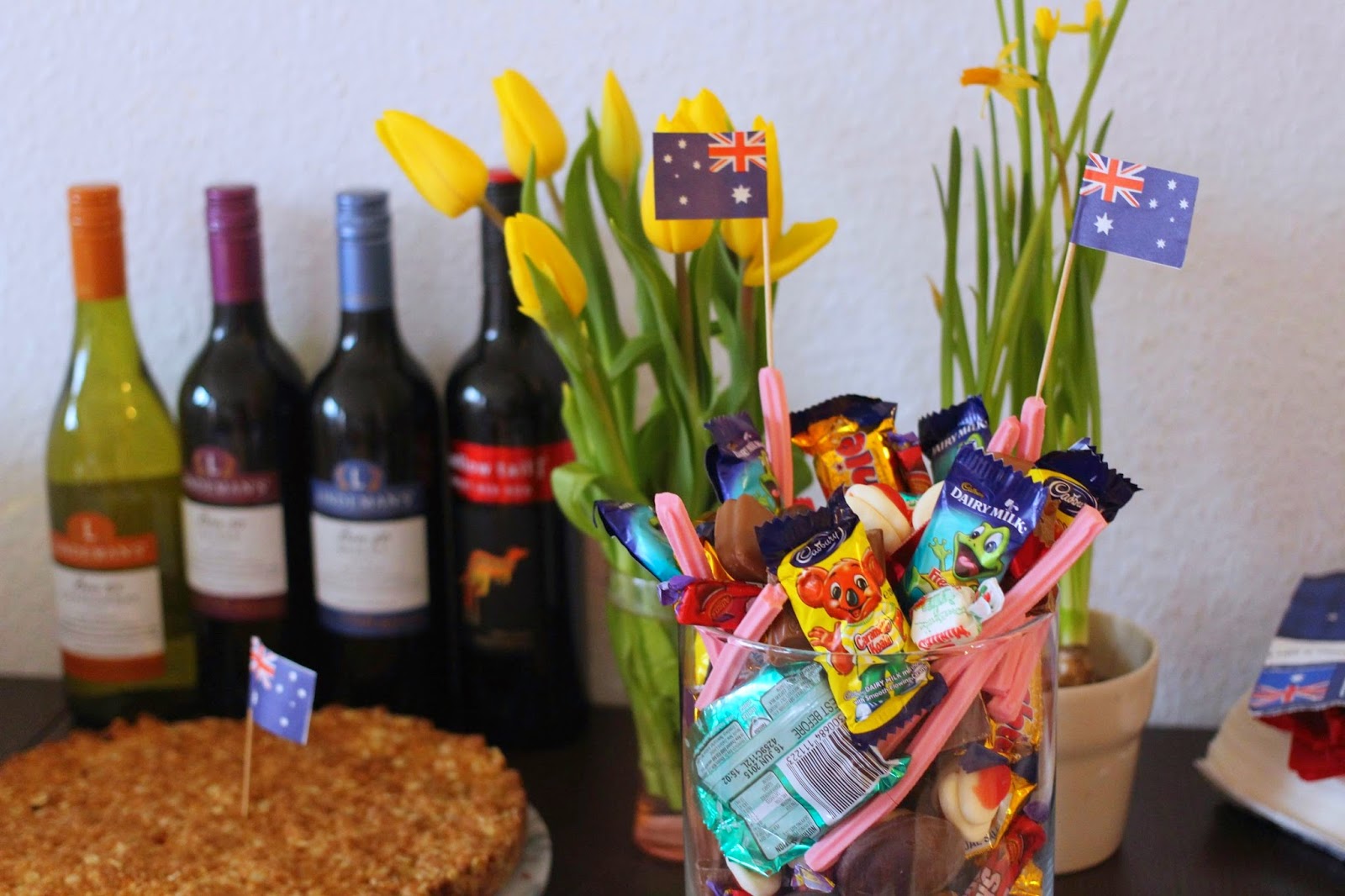 It was quite fun to see everyone sort out what exactly a ‘freddo frog, musk stick, strawberry and cream, redskin, or mintie… etc.’ was. 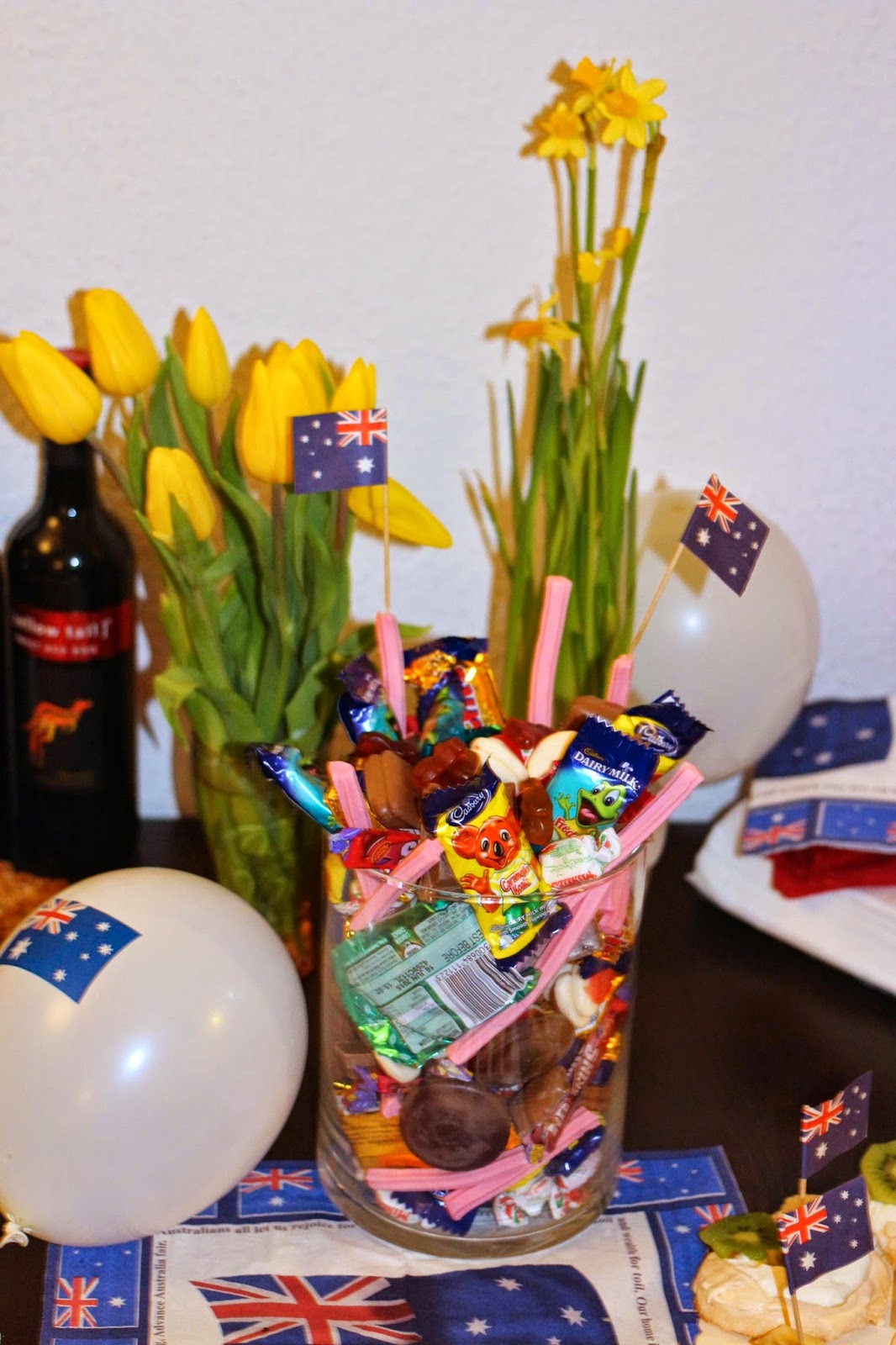 Almost all of the decorations you can see also came from my folks- sent last year, but unfortunately arriving a week after the event.

Of course, no Aussie party is complete without Vegemite Sandwiches! 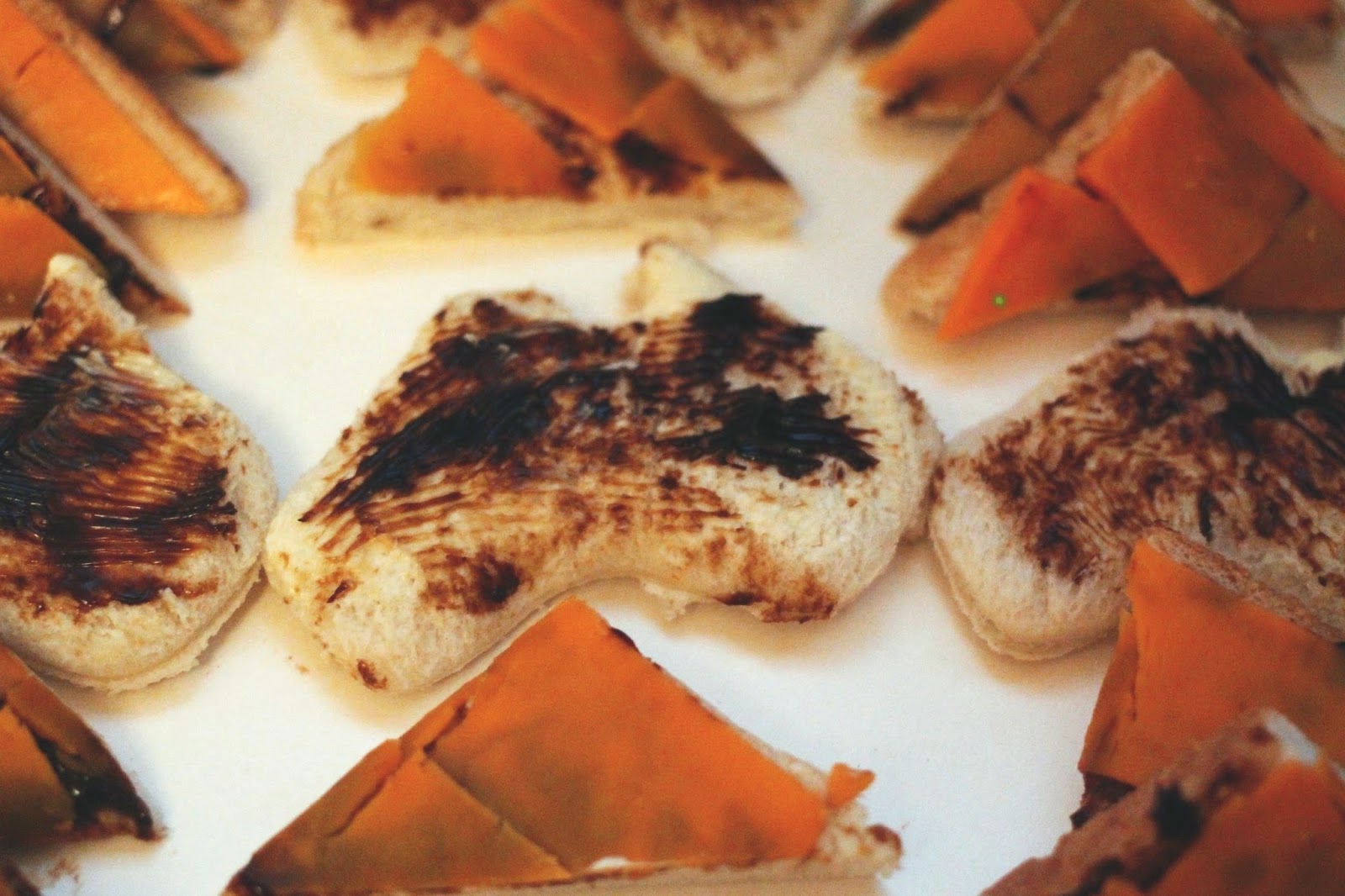 And of course- Kangaroo! Here in the form of a cured meat (Shinken)- once again celebrating the Aussie-Deutsch fusion! It tastes a lot better than it looks, and apparently goes very well with Aussie Beer (we managed to procure some Little Creatures for a very Not-Little cost!- Totally worth it!) 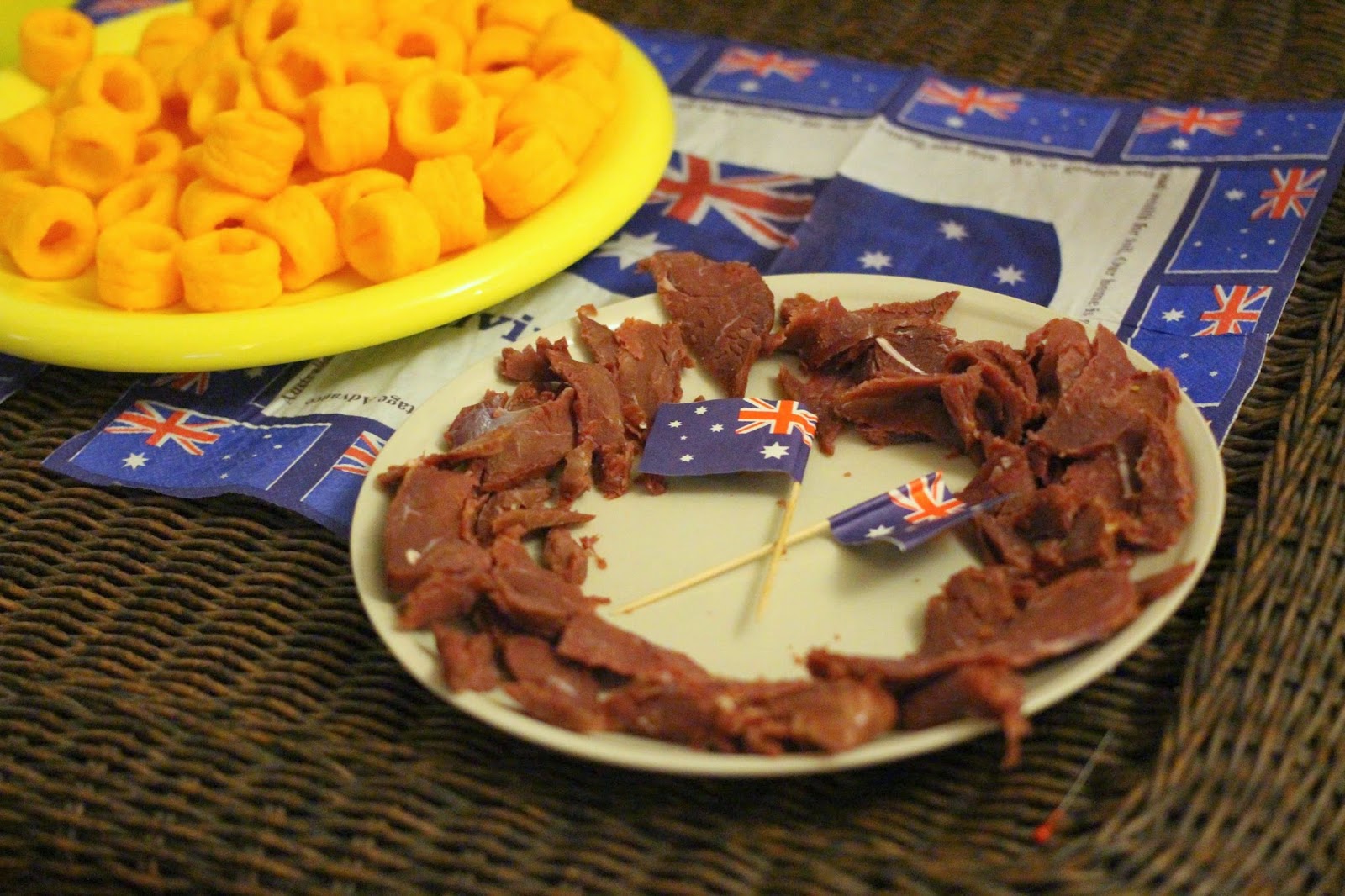 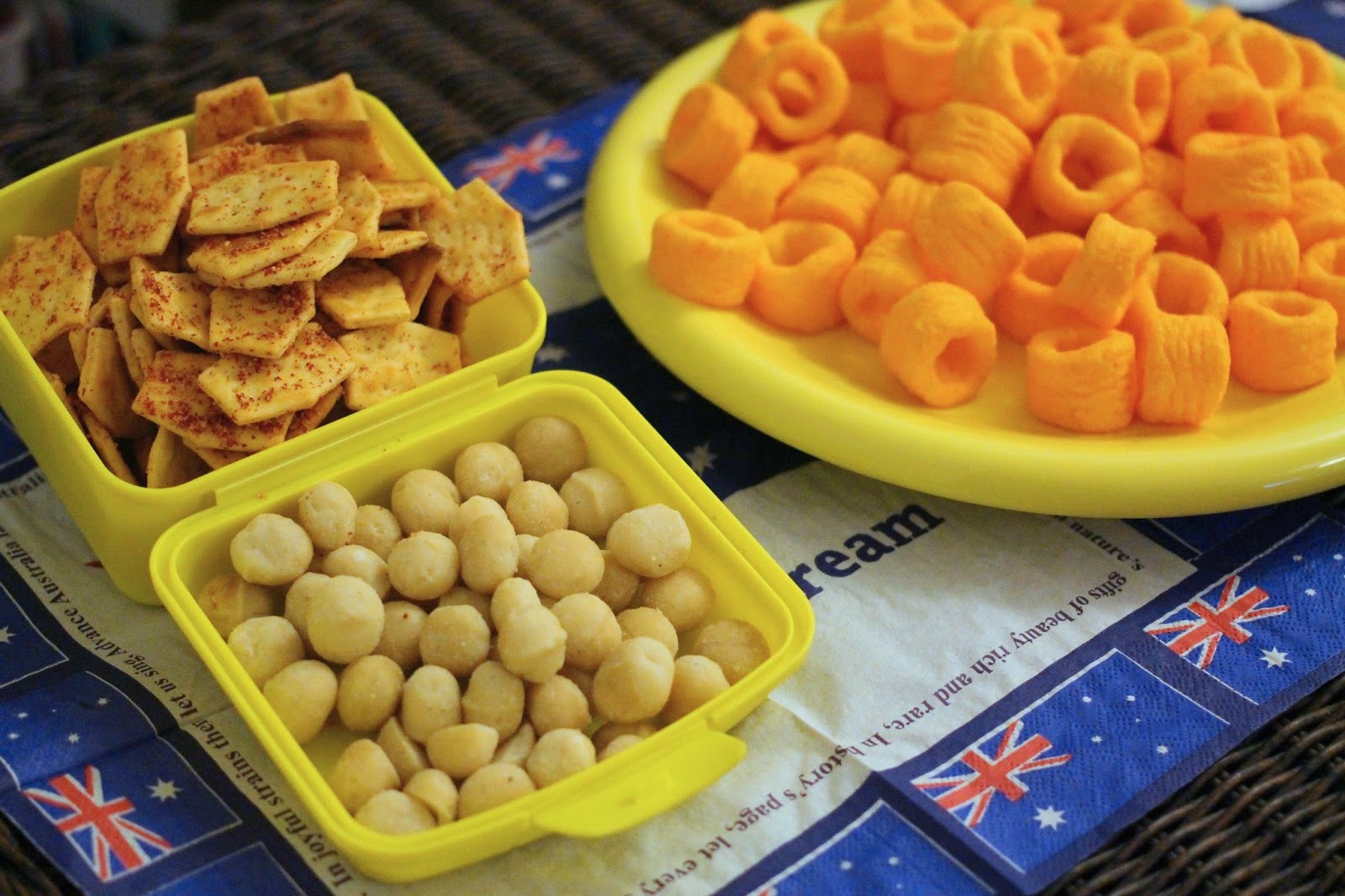 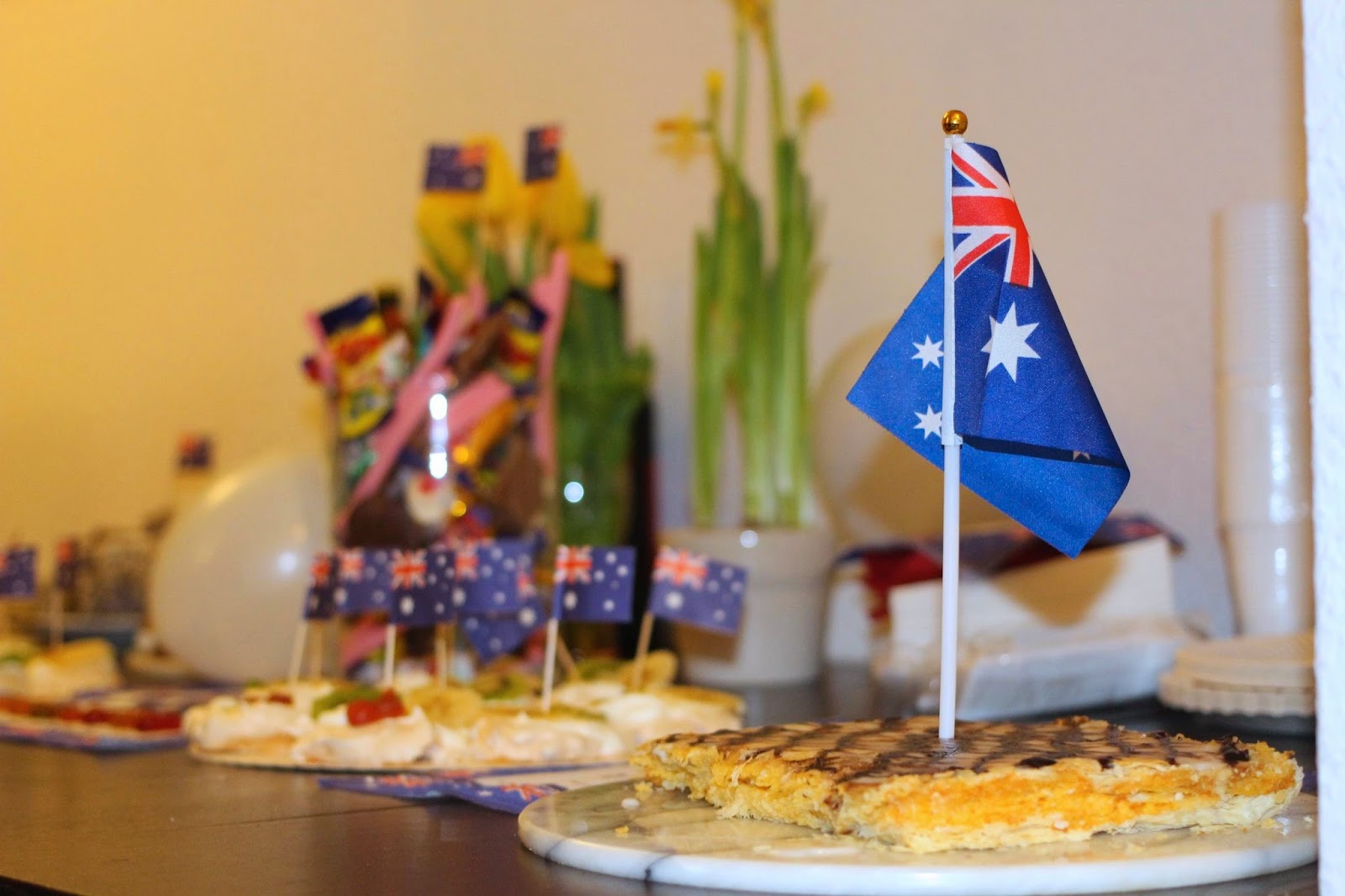 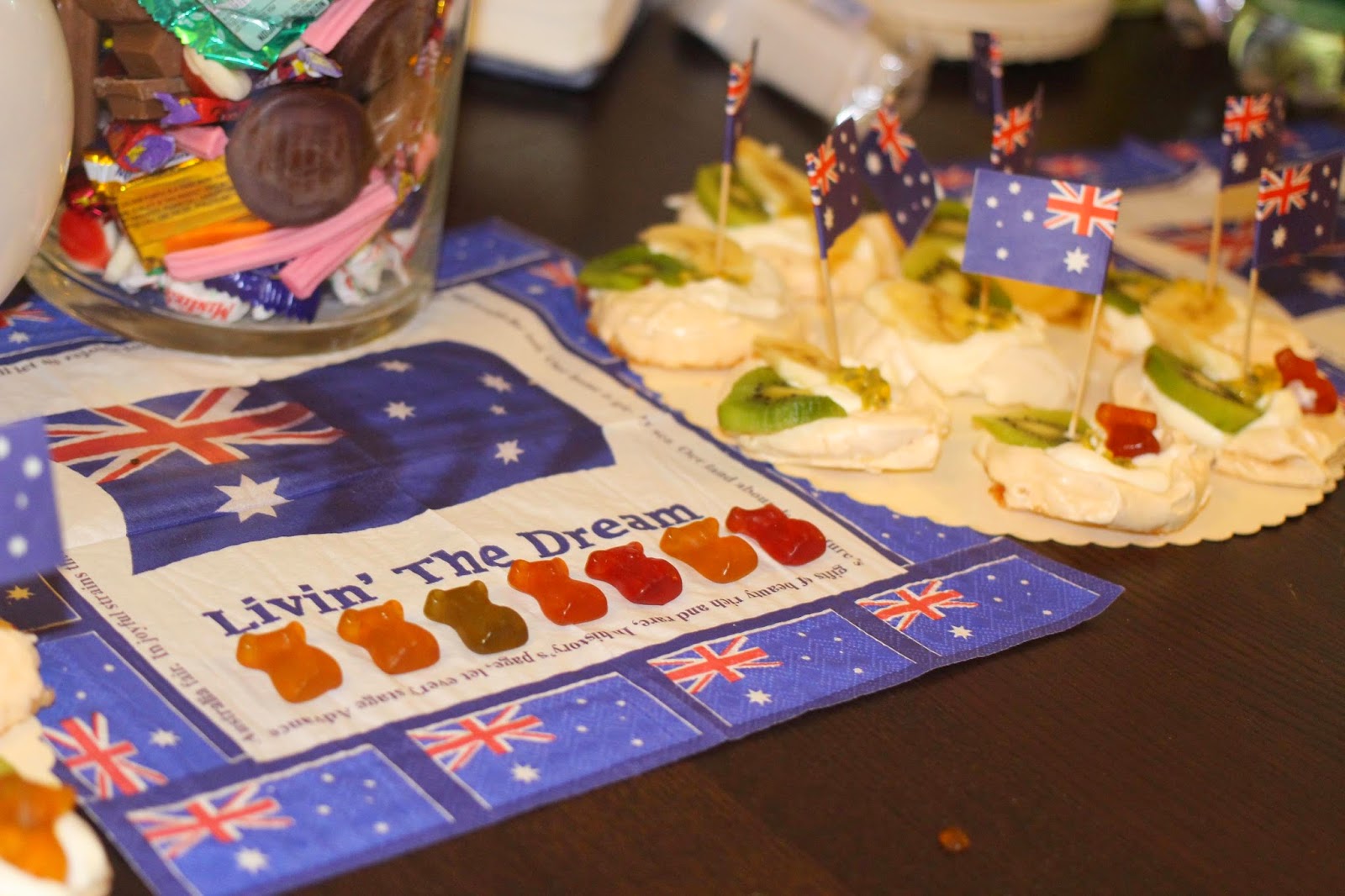 The final, and by far most successful thing that we made, was sausage rolls (sausages wrapped in pastry), and the most beloved: Party Pies. 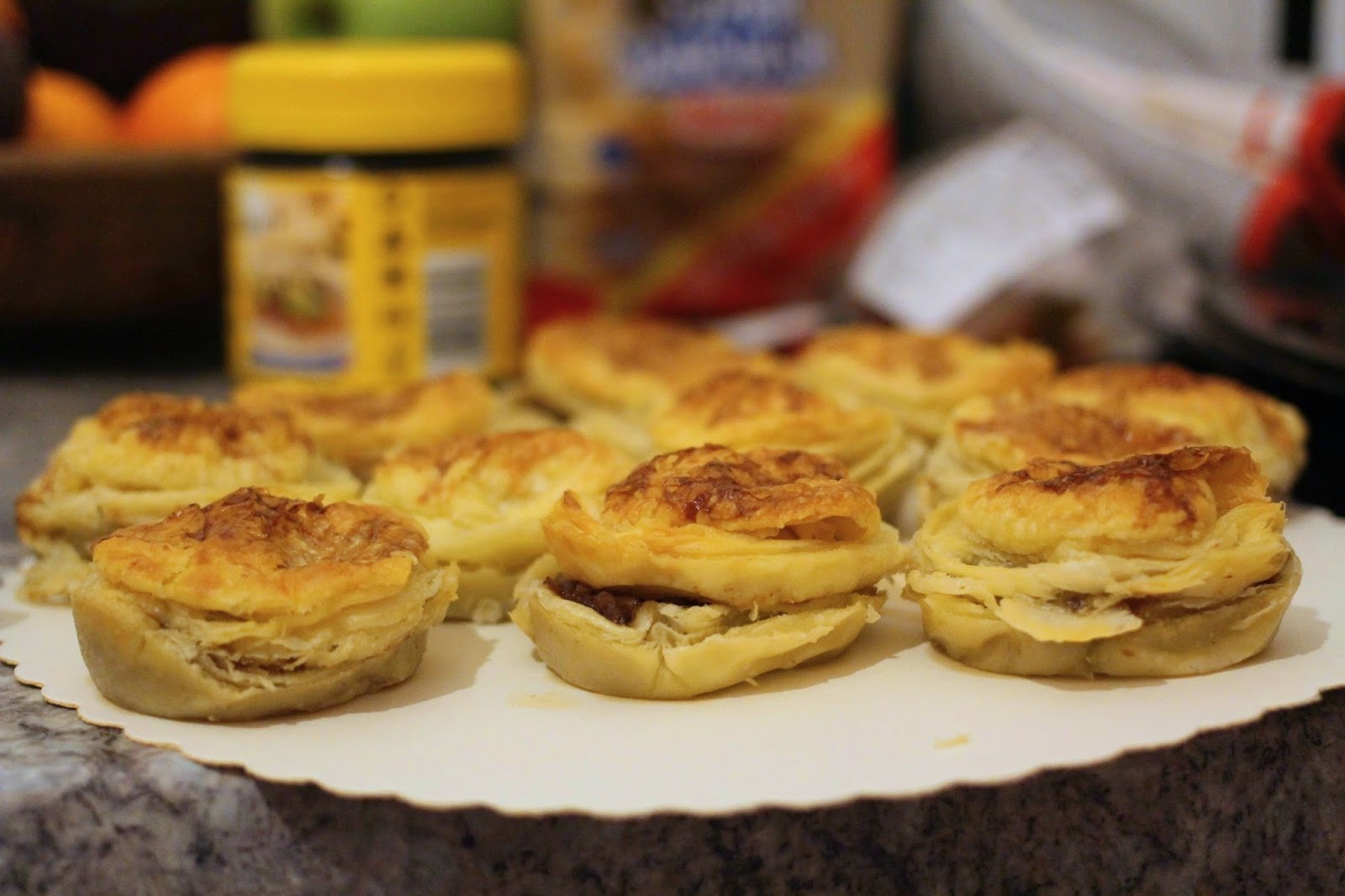 You’ll have to believe that they taste a lot better than the look. There were many burnt tongues from over-scoffing.

The recipe involves frying up some shallots in oil (I’m really into shallots right now- they’re so much more awesome than onions) then adding some beef mince. Later on, flavour it with some beer, 1 loaded tablespoon of vegemite, and add one small packet of instant gravy. Let it cook in it’s own juice for a while, then add some cornflour and more beer maybe- to give it a sauce that’s fairly thick.

Let it cool, bum the whole lot in some puff pastry from the store, and bake until golden brown at 180. 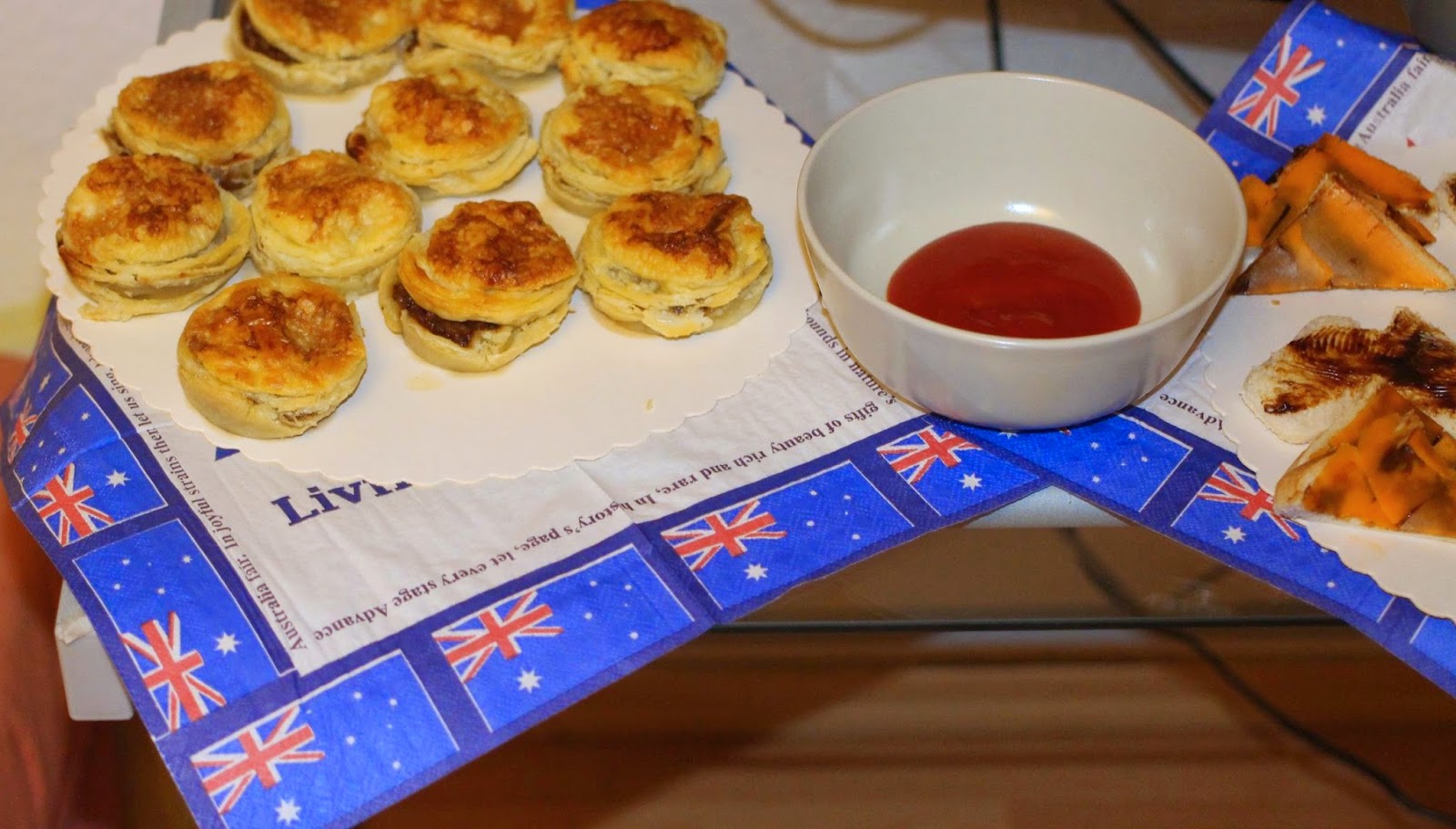 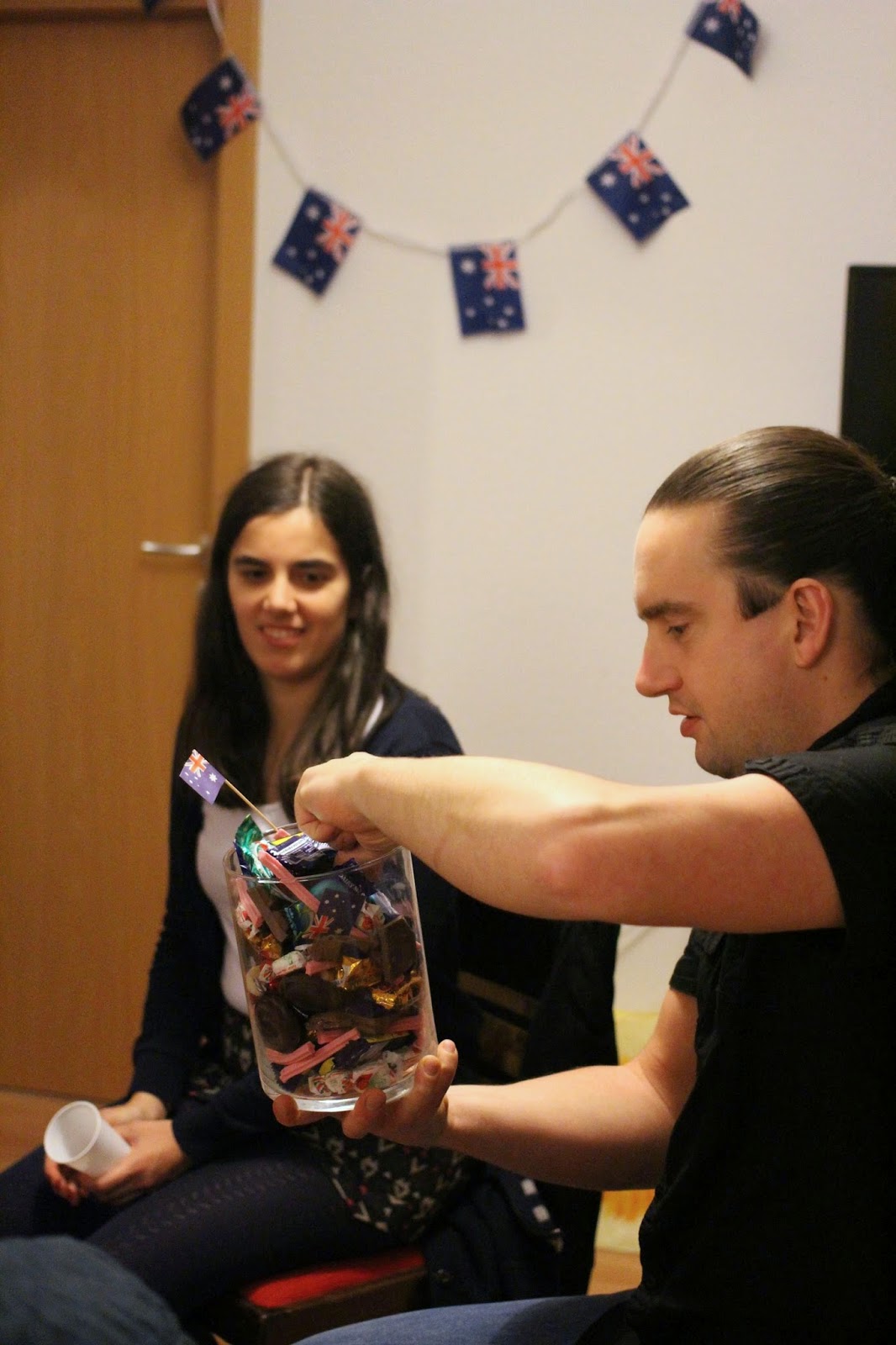 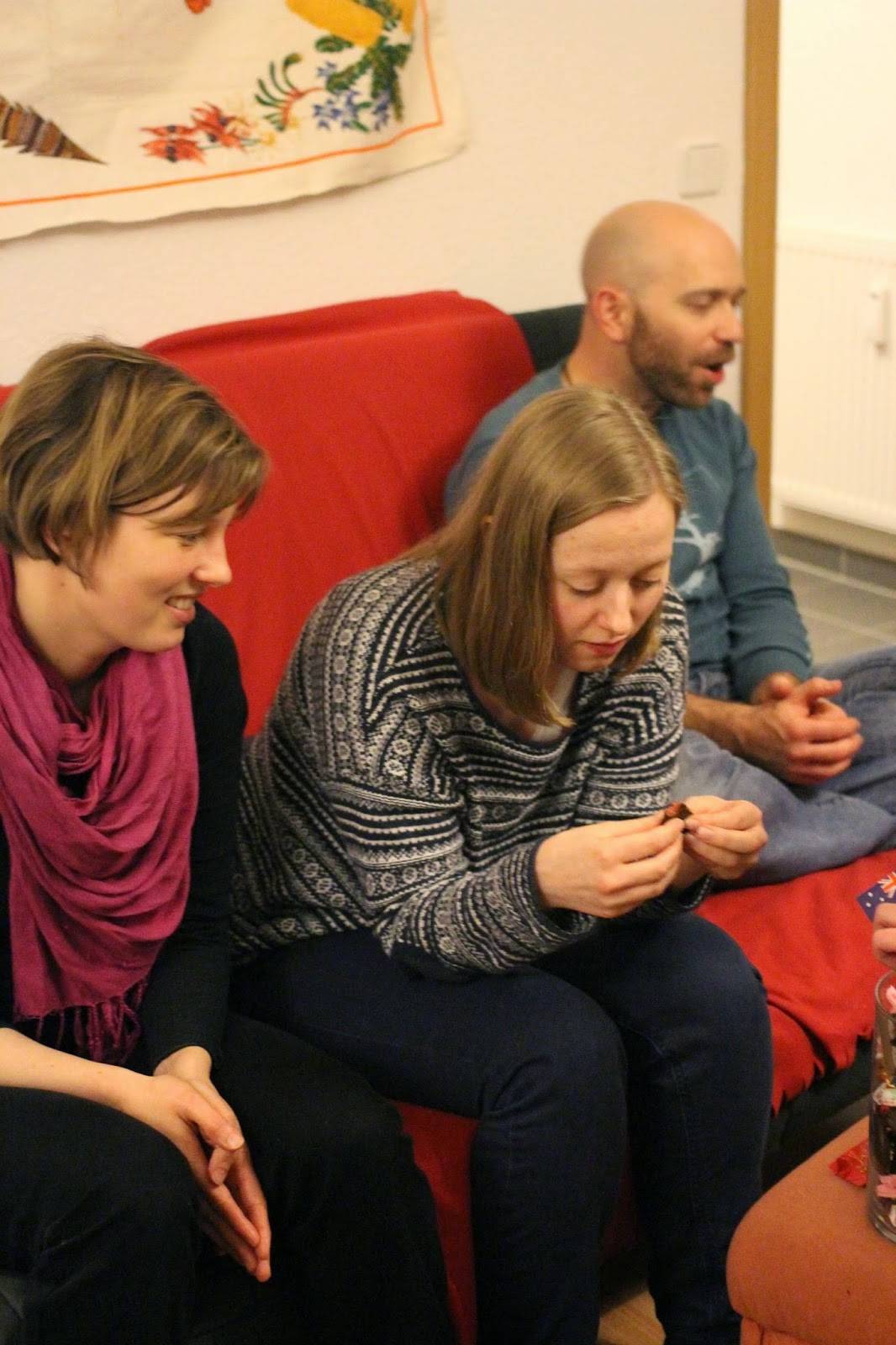 Hope you all had a great day my fellow Aussies!