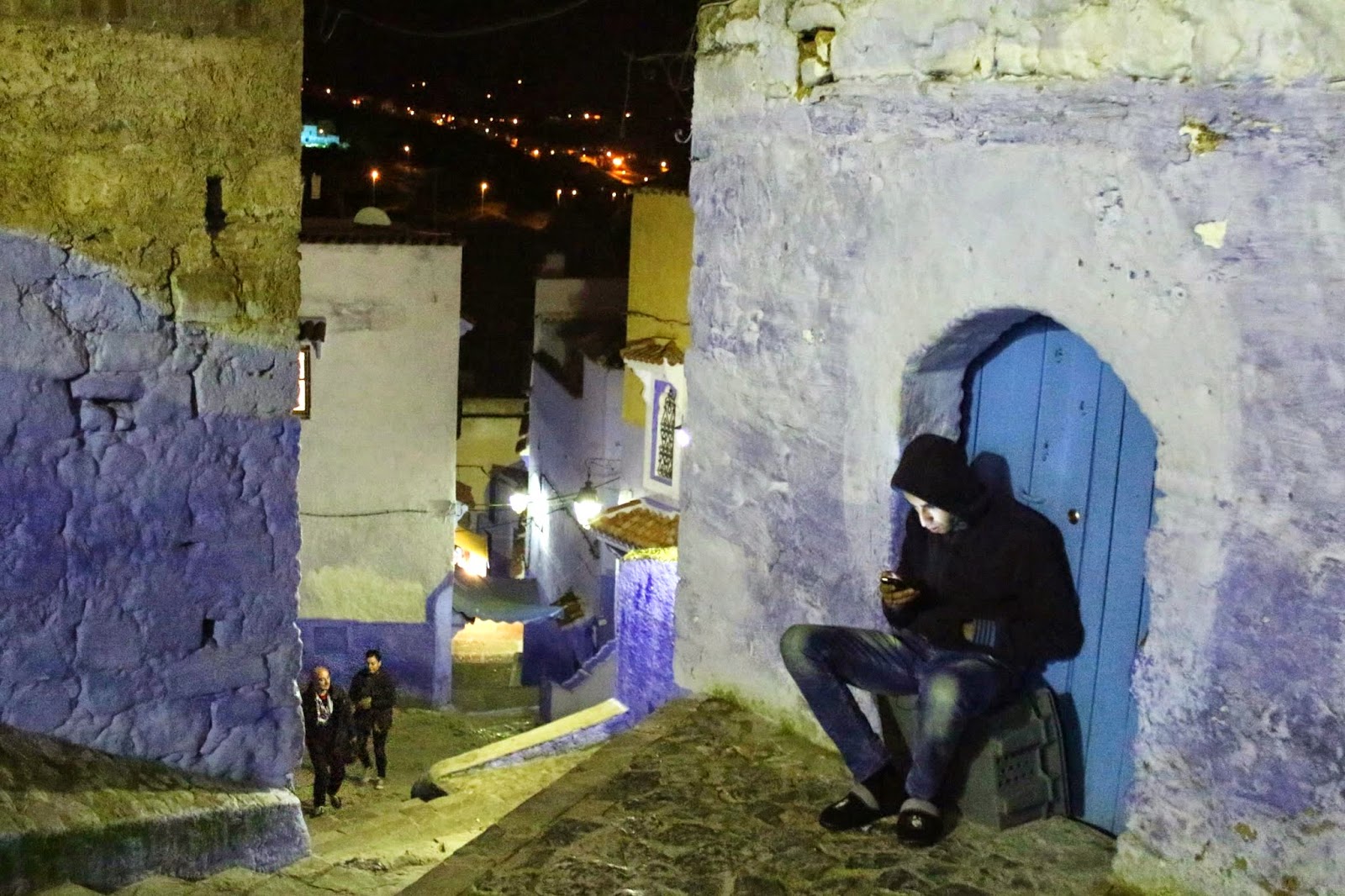 Chefchaouen, or ‘Chaouen’, was a city that I immediately knew we had to go to.

It’s a city with a Medina that has been largely painted blue!
Chaouen is located south east of Tangier and almost directly North of Fes. It takes about 3 hours in the bus from Tangier, and a bit longer from Fes- still, it’s more than possible to do a day trip there from either place (we heard tale of a group of four paying only 10-20 euros each to go to and from Fes in a taxi).

However, just because you can do a thing, doesn’t mean you should- Chaouen is a place that deserves at least a couple of days- more if you’re really into hiking, beautiful scenery, or the colour Blue.

Chaouen is like an Oasis in the desert- or more accurately, the mountains, as it’s situated within the Rif mountains (and the name apparently comes from the nearby mountains that look like two goat horns).

Anyway, the ride from Tangier- bussing through rapidly changing scenery, was super pleasant, and I spent nearly the whole time just staring out the windows.

Here’s what I saw. – straw flying off the roofs

–Lavache qui rit advertised on billboards and every second store.

– a man, sleeping on a picnic blanket near a car. Clothes near him drying on a tree -ladies on the side of the road squatting down, selling small things

– a man bbqing, a dead carcass near him and many many onions. – a donkey standing with his leg in the air. He was tethered, and lifting his food to reach out for some tastier flowers

-bundles of onions like wreaths of garlic hanging from a tree.

– mountains turning from green to rock, with clouds at the tips. 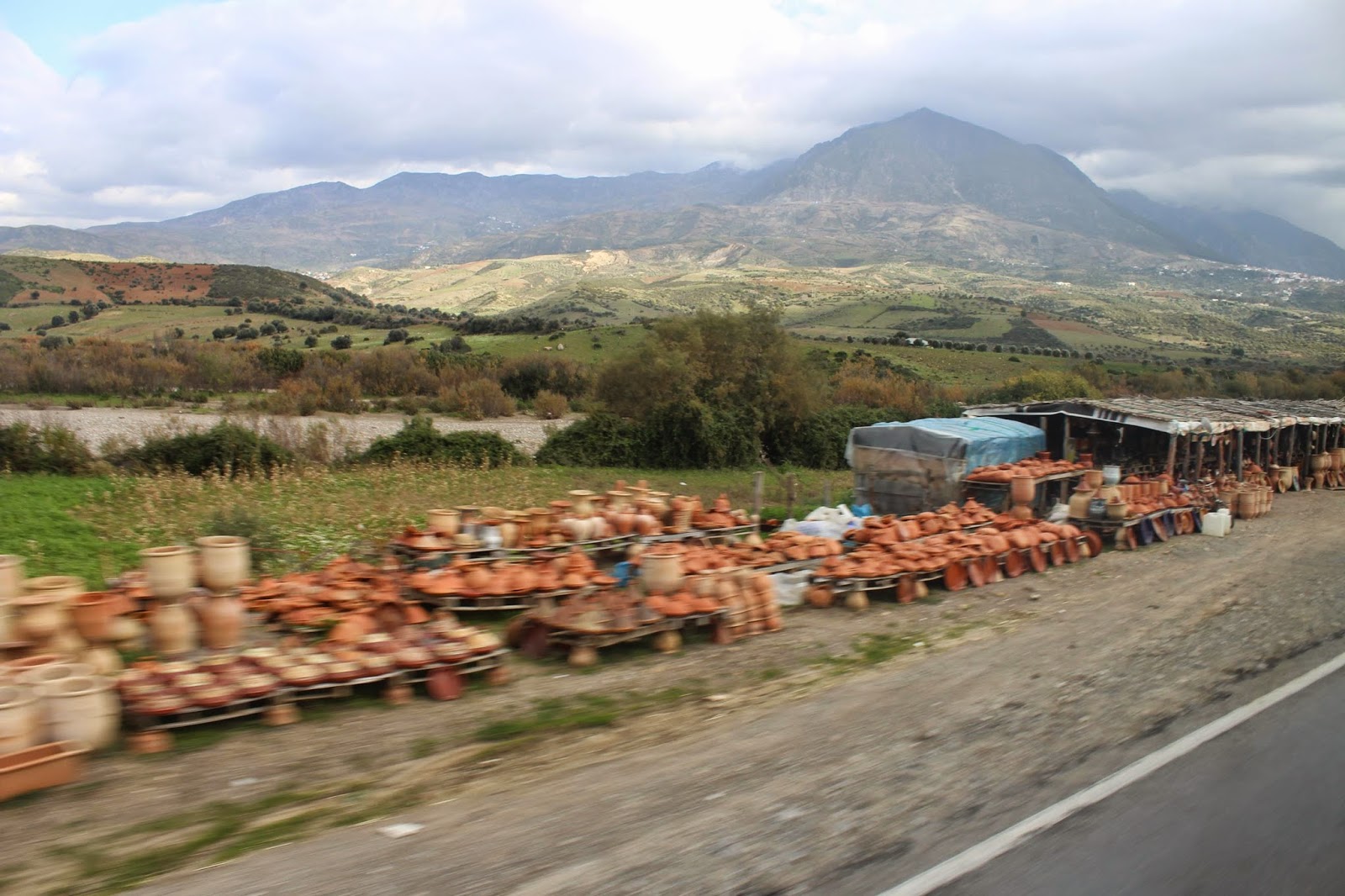 While we were breakfasting in the hostel in Tangier, we realised that some of the other guests were also heading to Chaouen on the bus that day, so we decided to roam around the town together. Hopping off the bus, we started (very) briefly up the hill to the Medina, then realised we were way too lazy, and hopped in a cab. Trust me, the few bucks you’ll pay for the ride is probably worth it if you have luggage and aren’t that into uphill climbing.

Fun Fact: In Chaouen, fitting six people plus a driver into a cab is really no problem. As long as you’re happy to get friendly with your co-riders. We were a bit worried at first about the lack of blue in the city, but that sorted itself out fairly quickly when we got to the Medina. 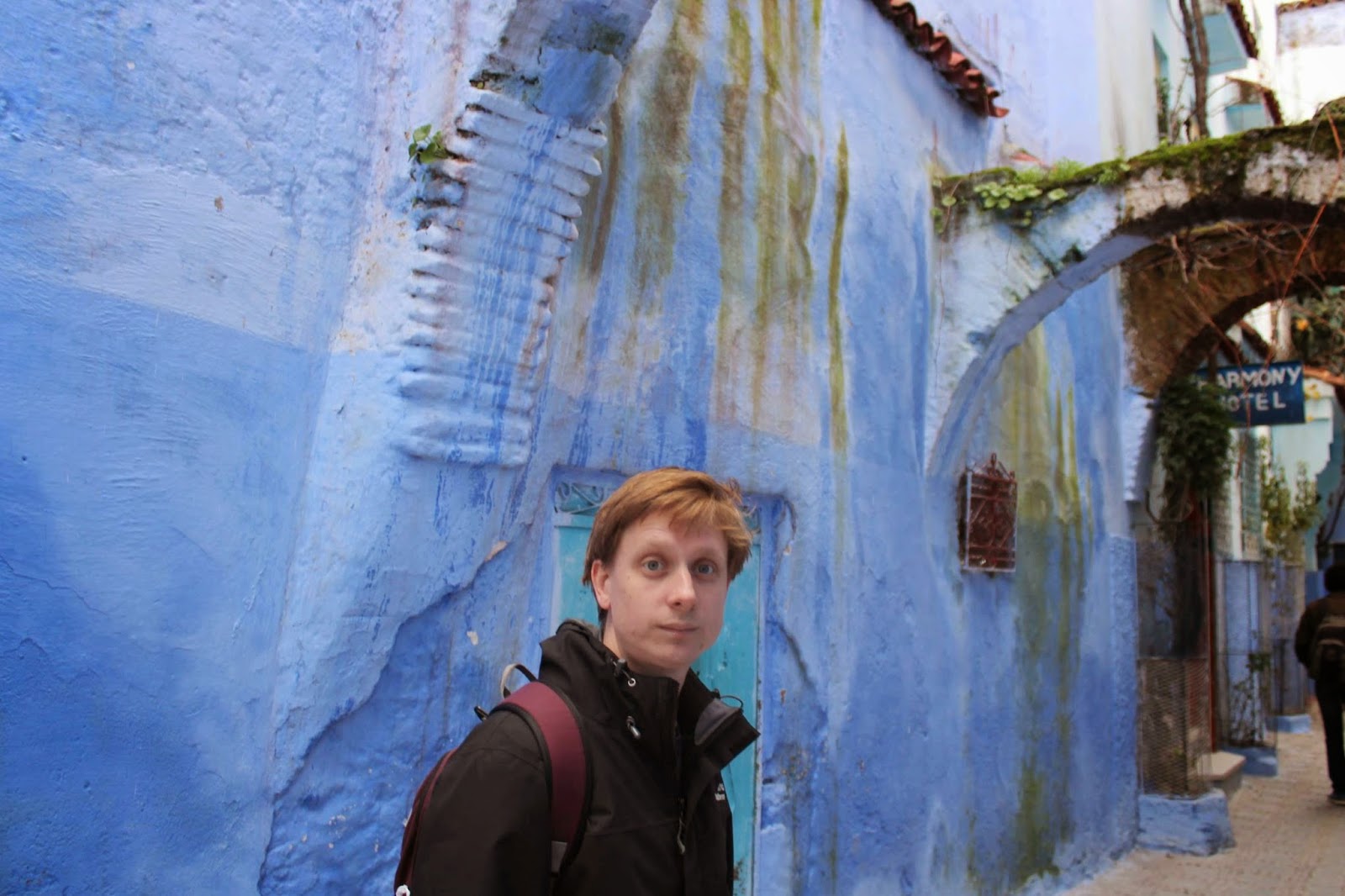 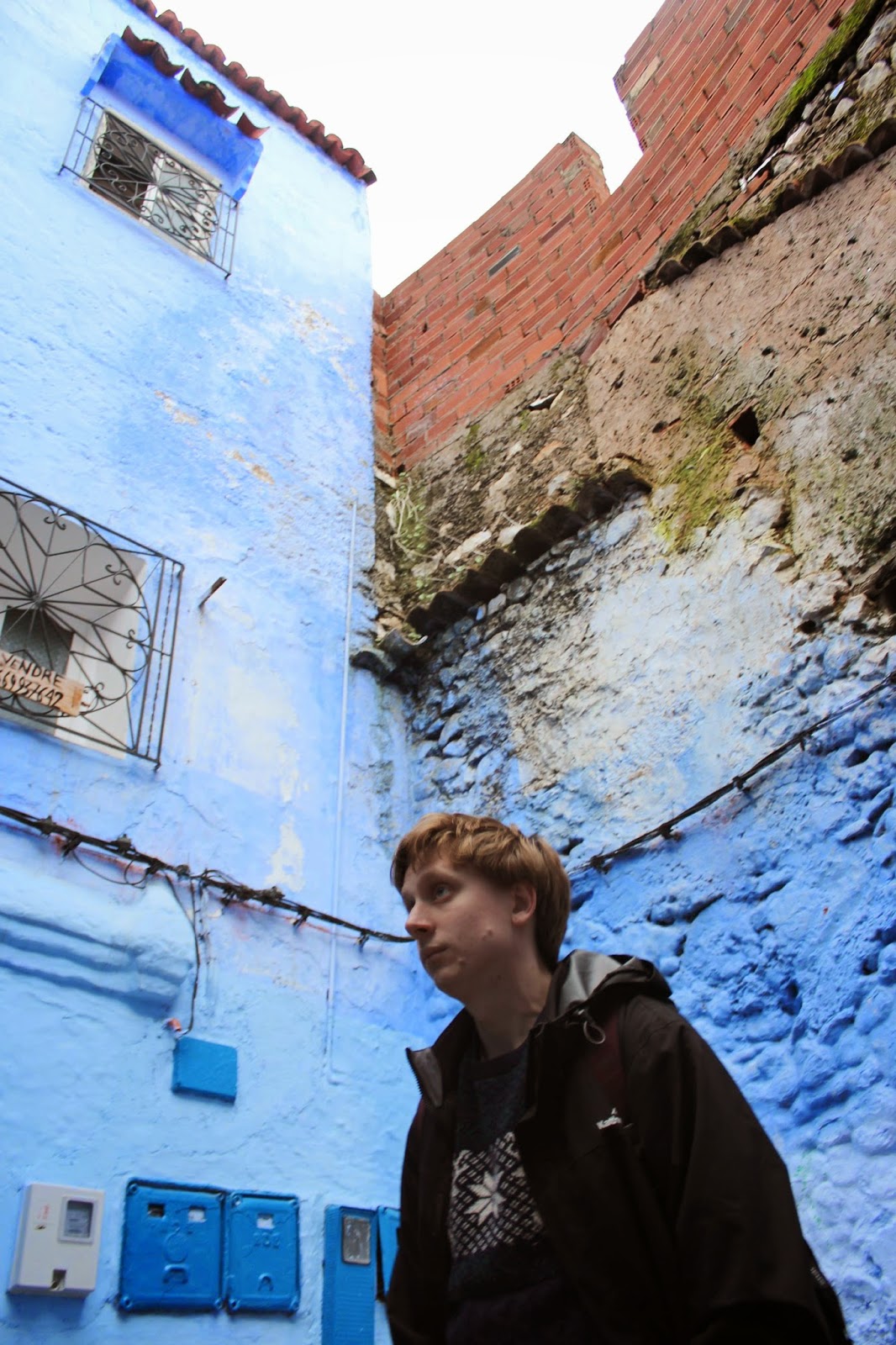 Ok, so I didn’t take many photos of the blue on the first day. In my defense, were all starved by the time we arrived, so after settling in, we headed straight for the nearest foodstop.

We were in  luck! The food was good, and the owner was super friendly. He wanted to plant us at his best table-with-a-view, although the end product that we were parked in front of pretty much the only red wall in the city.

I guess the house owners were individuals.

Chefchaouen has a super-relaxed vibe, and calmed us down after the chaos of The Border Town. I cannot explain the difference it made to see that there were actually women walking around at night (not the case in Tangier Medina!).

We spent the afternoon and evening just wandering the streets, window shopping (plus actual shopping), with occasional stops for Mint Tea. 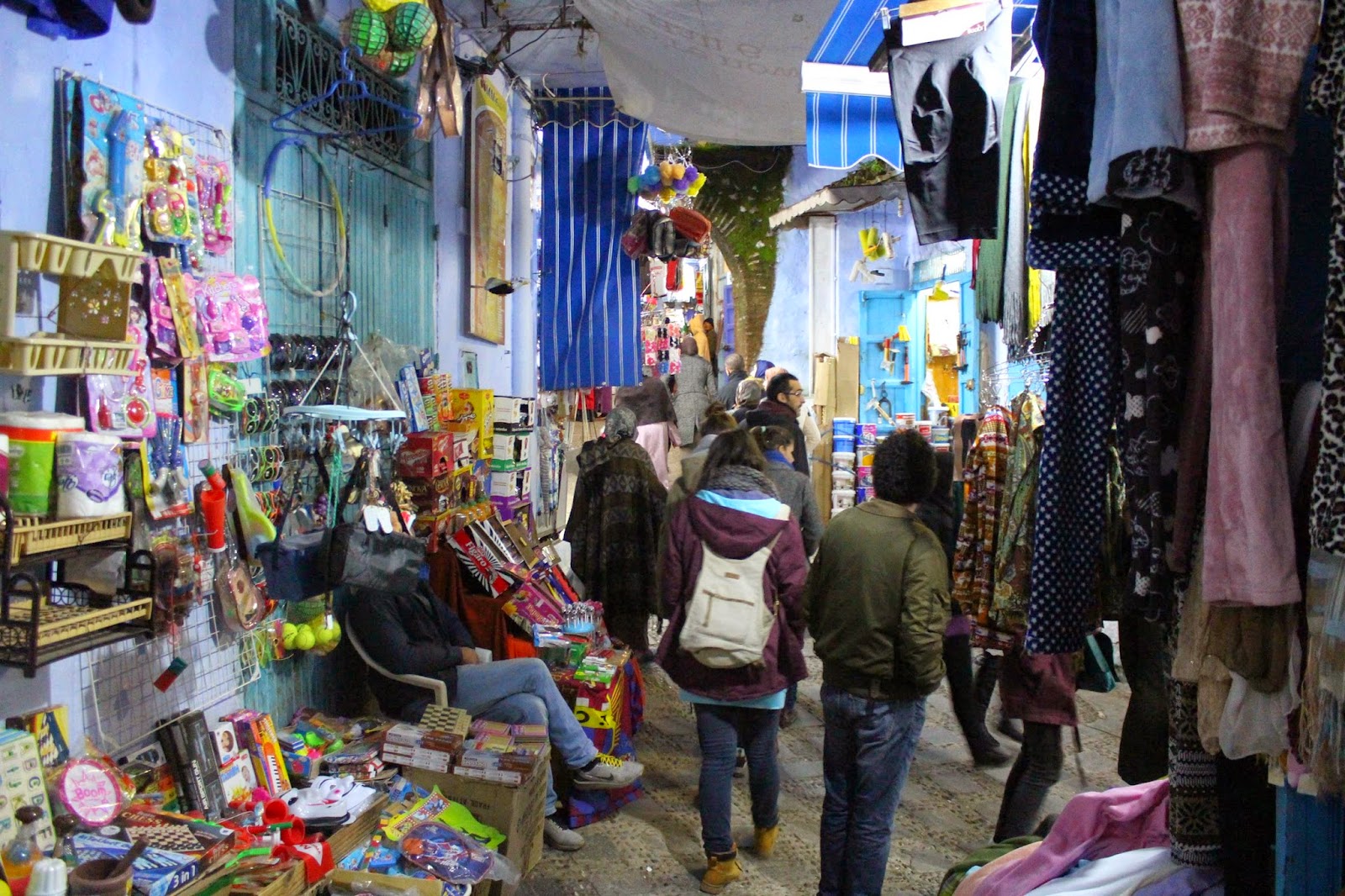 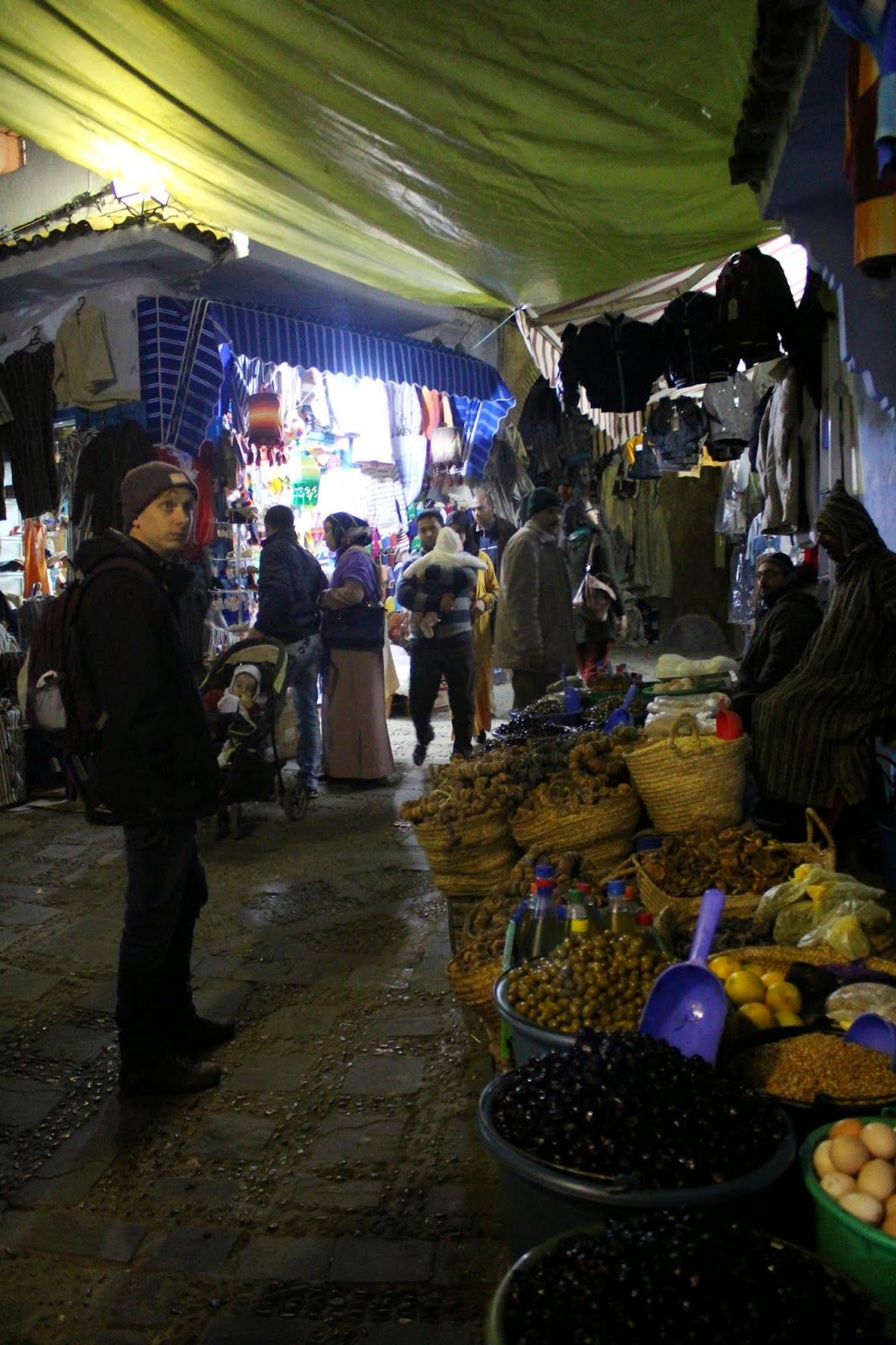 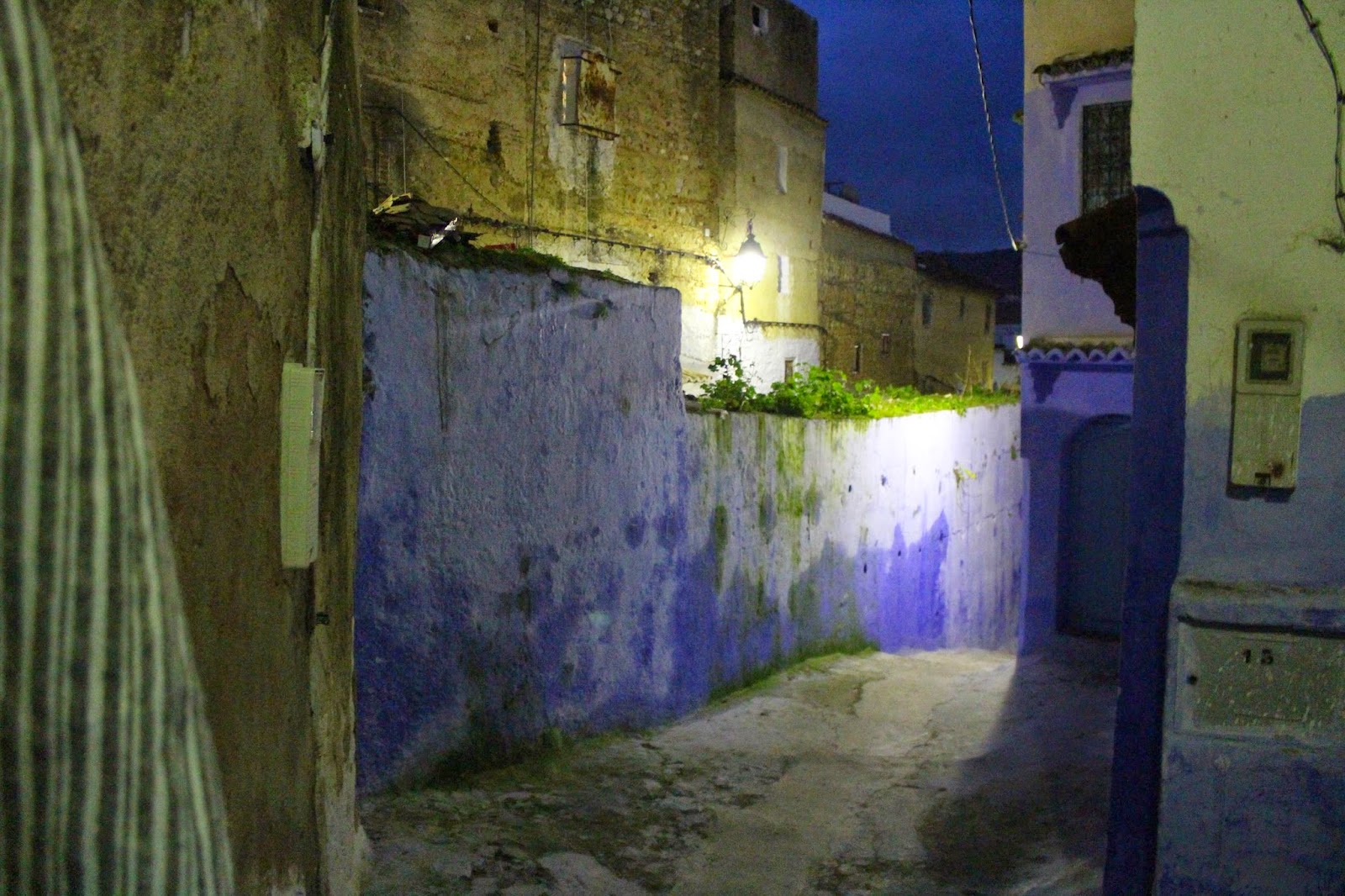 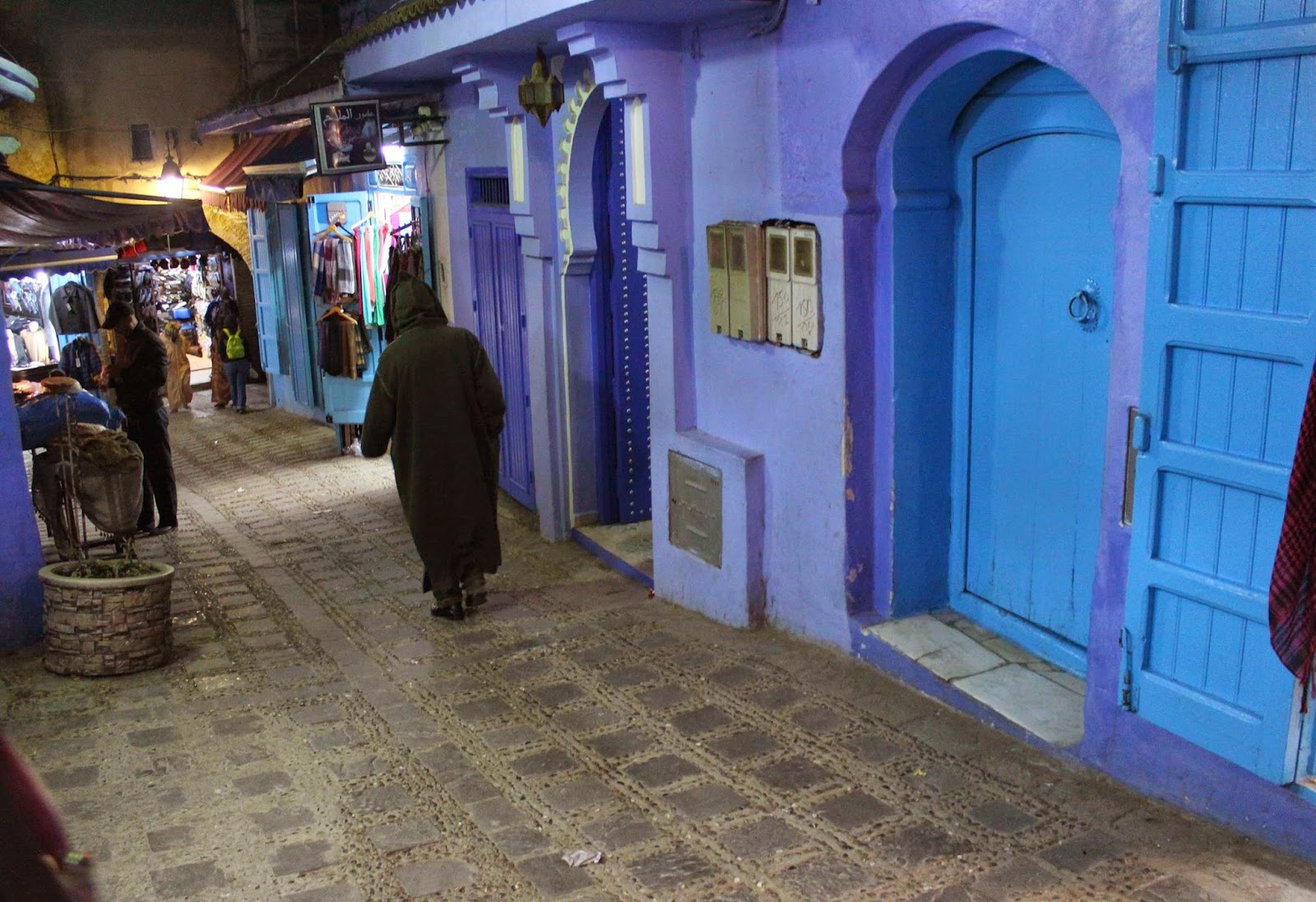 Almost all the men, and some of the women, were walking around these crazy pointy-hatted Snuggies, that the US-American among us wasn’t sure if she could get away with wearing in the States. 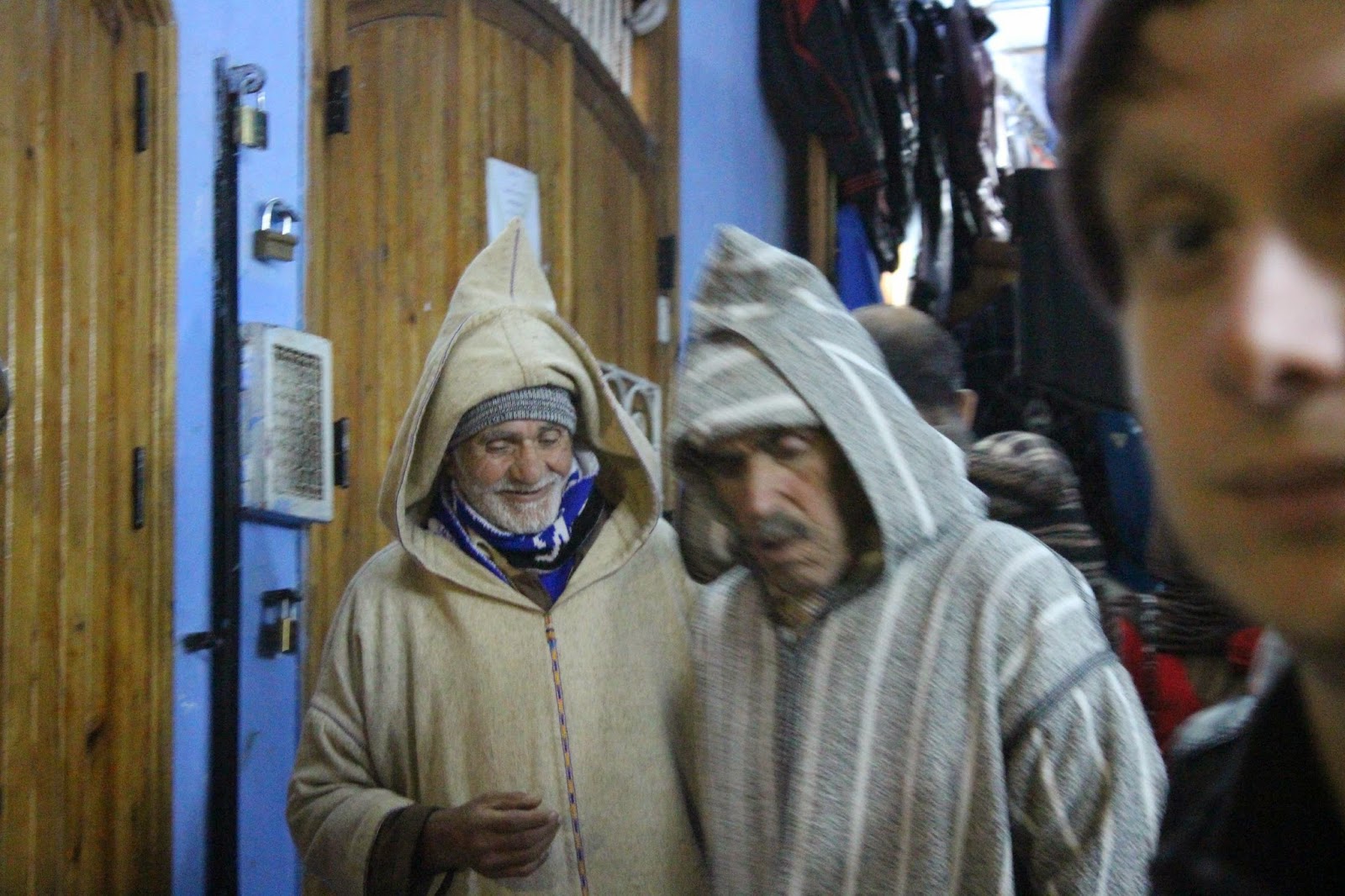 Here however, they looked unbelievably cool, and more importantly, comfortable. But so many people were wearing them (and selling them), that we started to wonder if there was some sort of decision made by the Chaouen tourism board to either promote a cultural vibe, or simply to push the product. 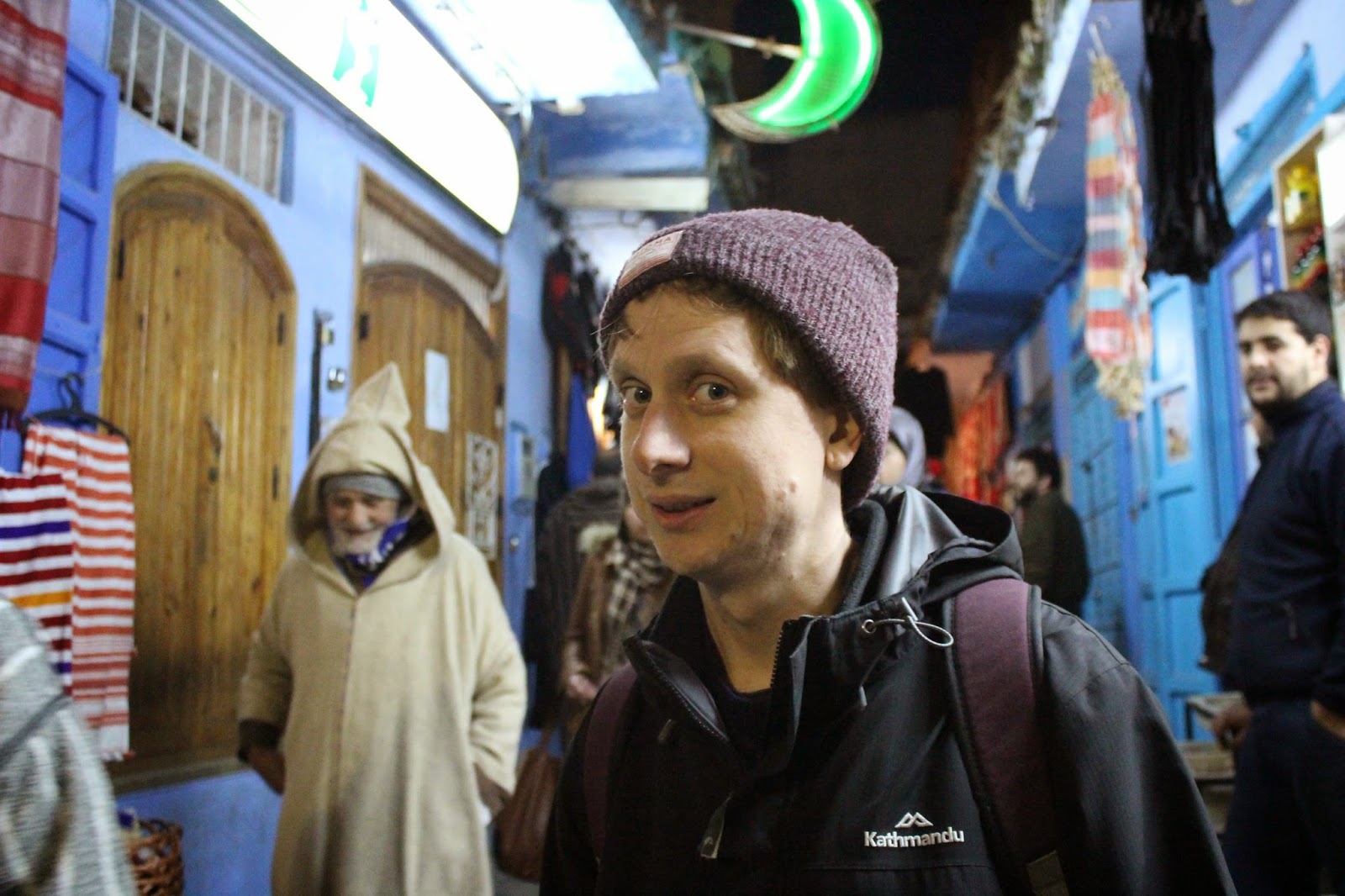 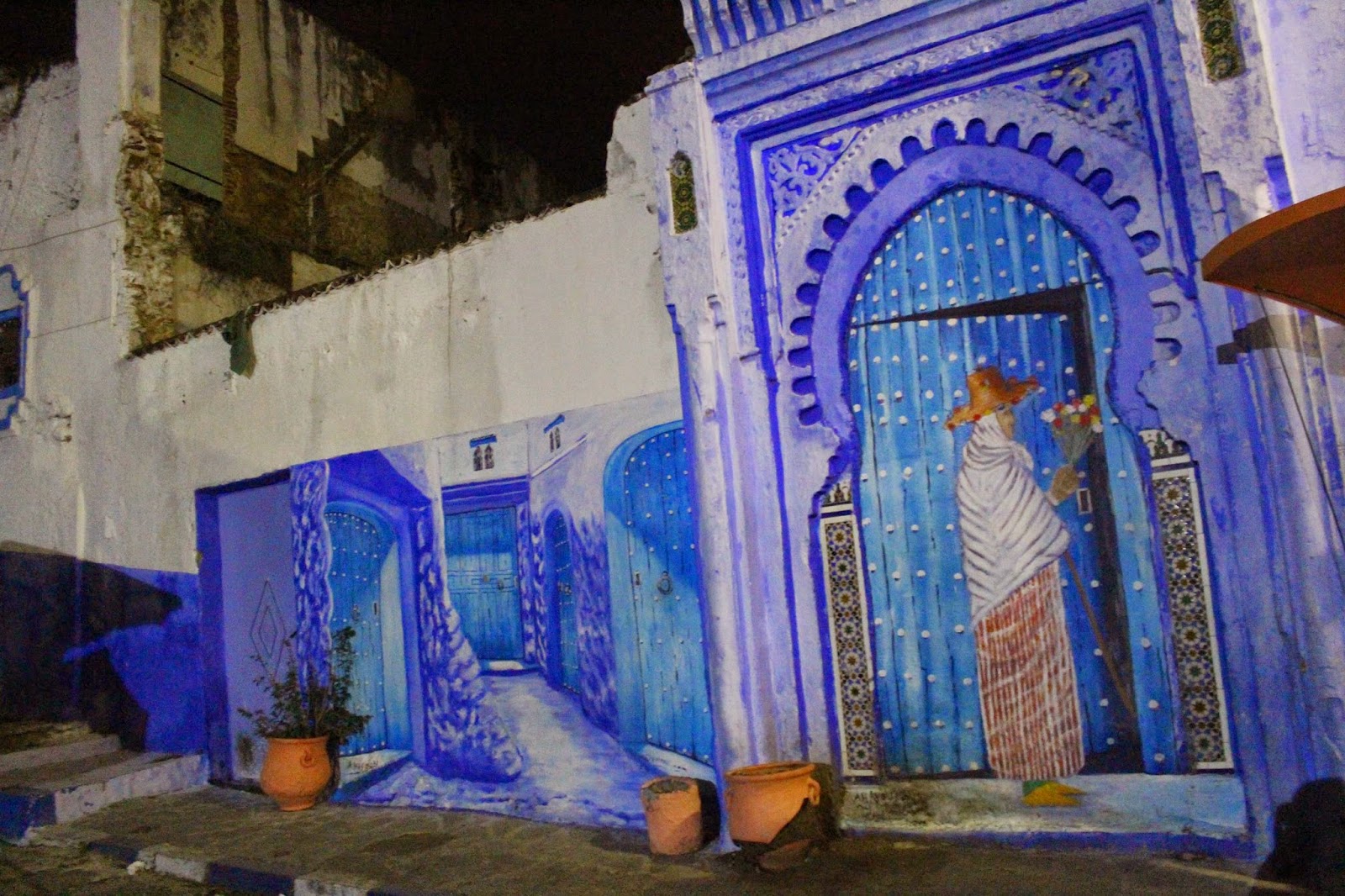 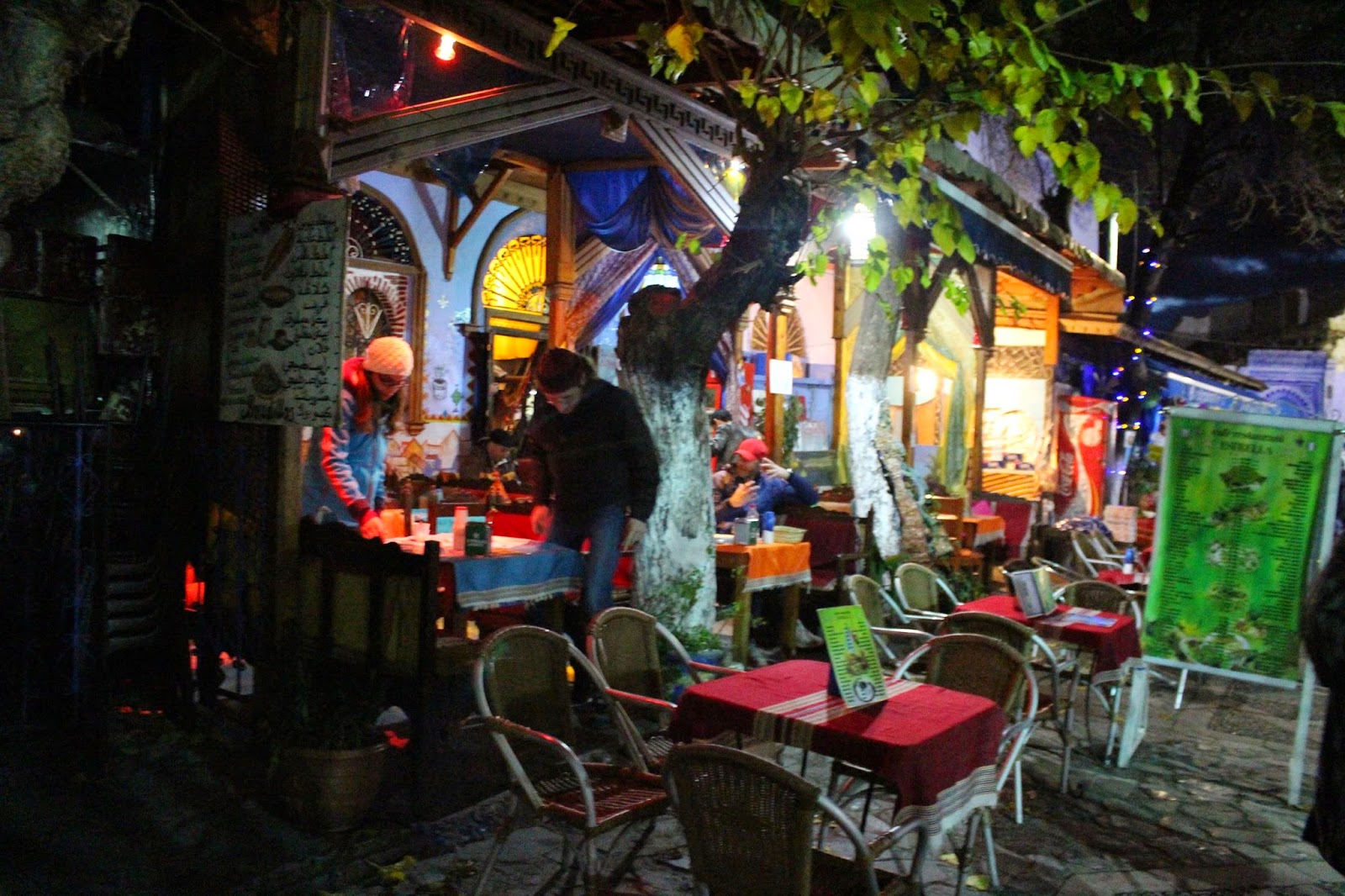 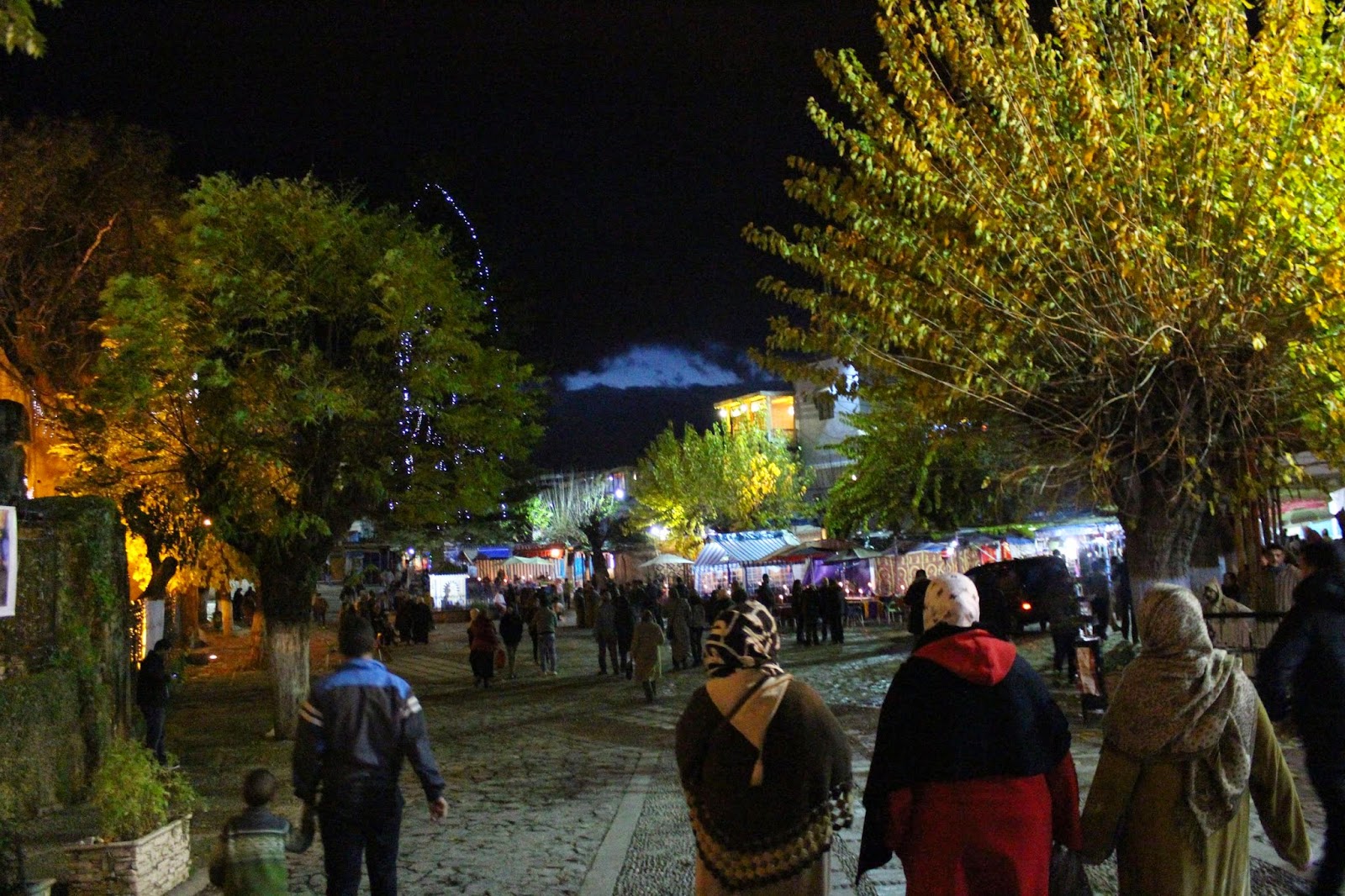 If you make your way to the main square, you’ll find a lot of people trying to get you to drink tea at their restaurant, and- after dark- several men who will offer you hash (the mountains around the area have massive fields, and the country’s market seems frankly over saturated with the stuff), but they aren’t overly persistent, so you don’t come away feeling too harassed. 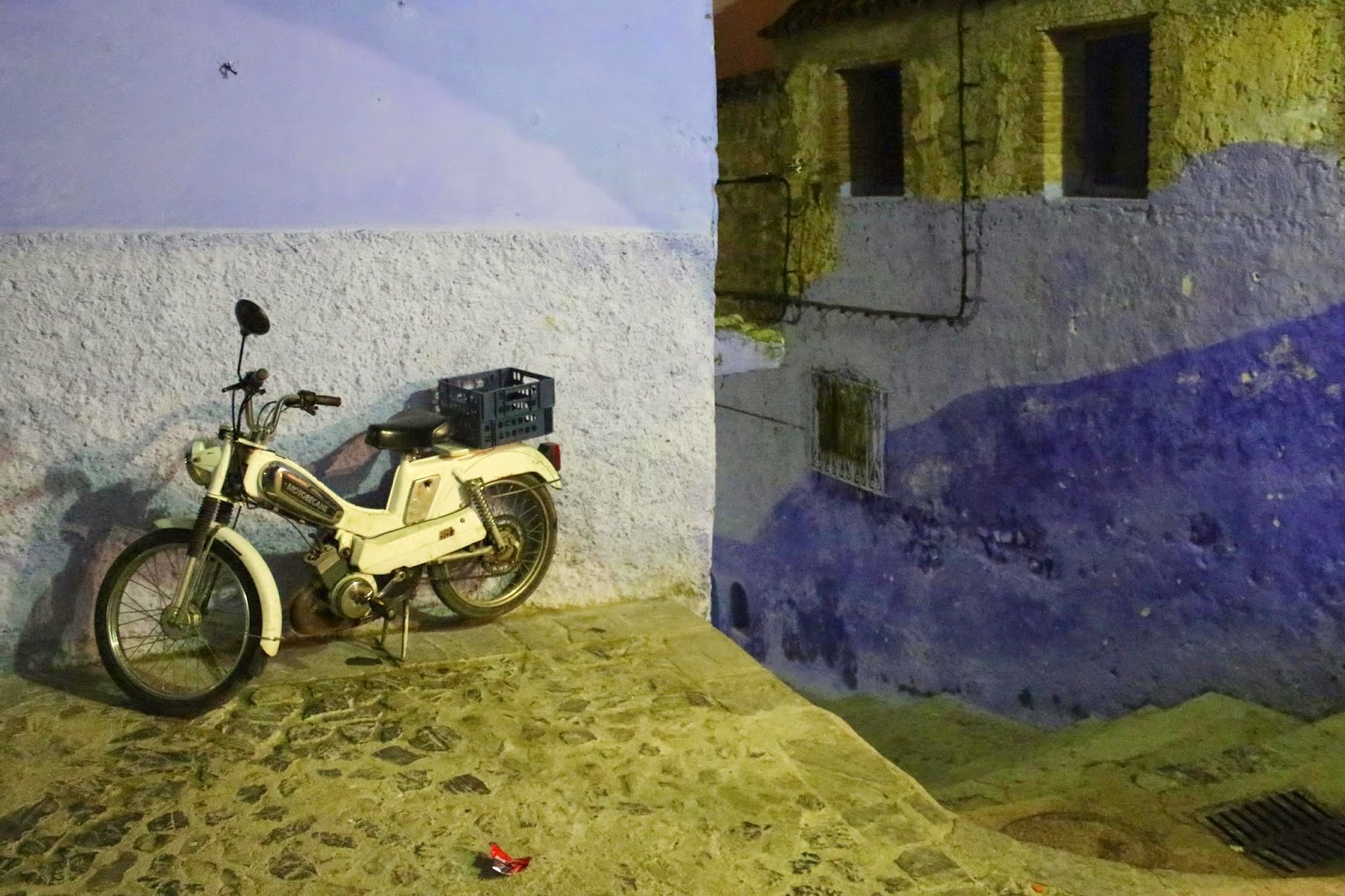 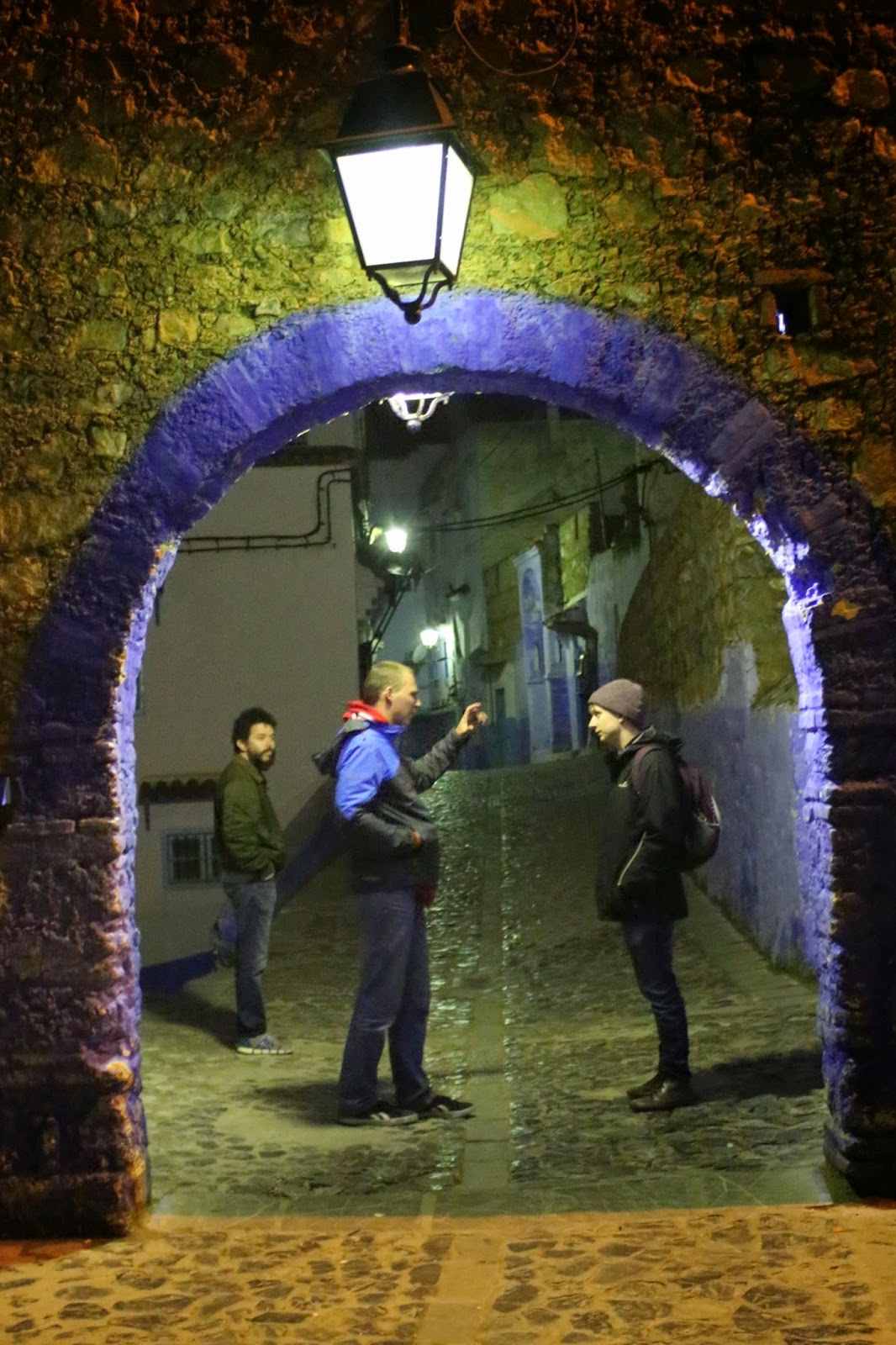 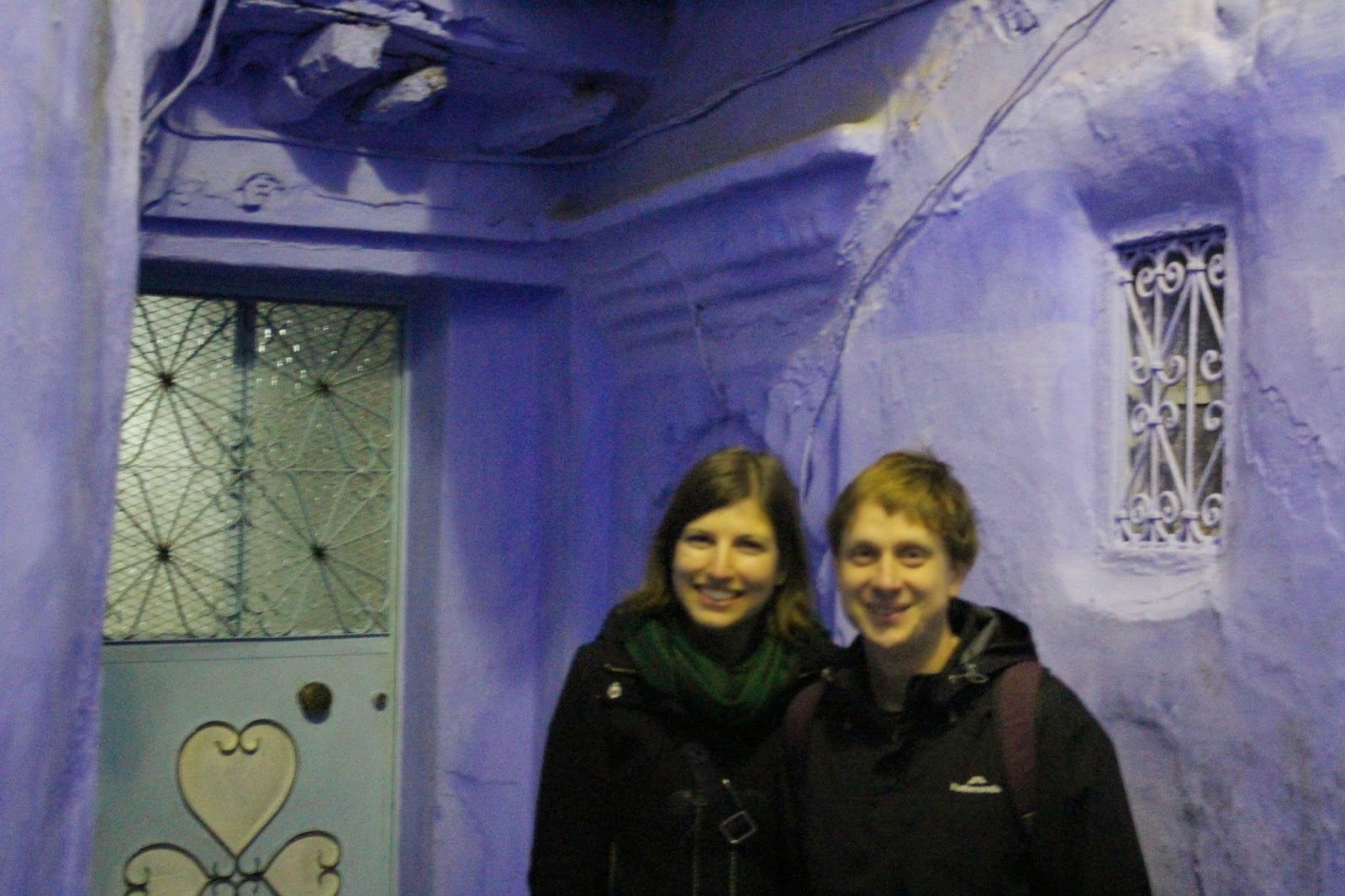 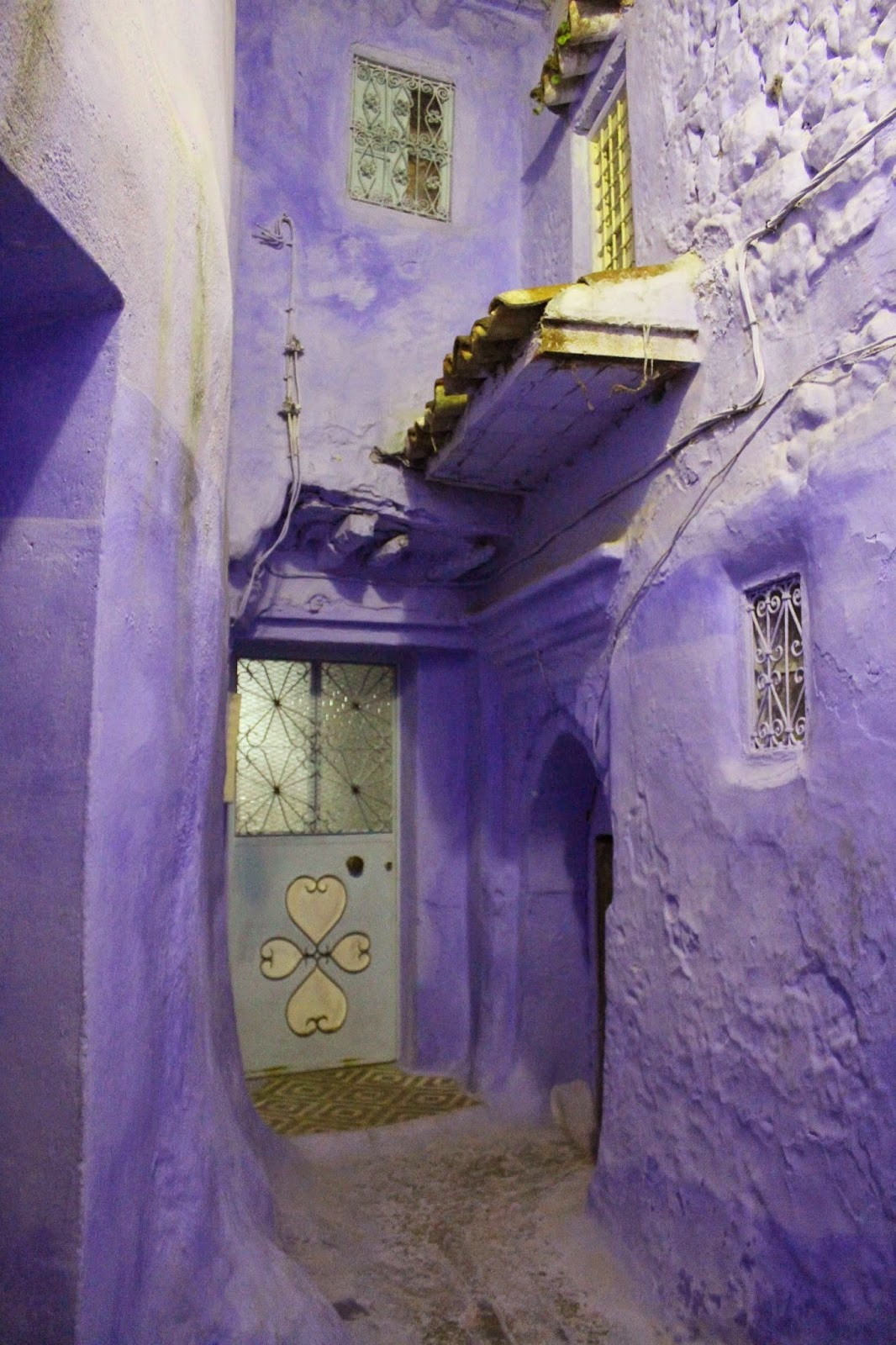 What do you think? Is blue you’re new favourite colour?