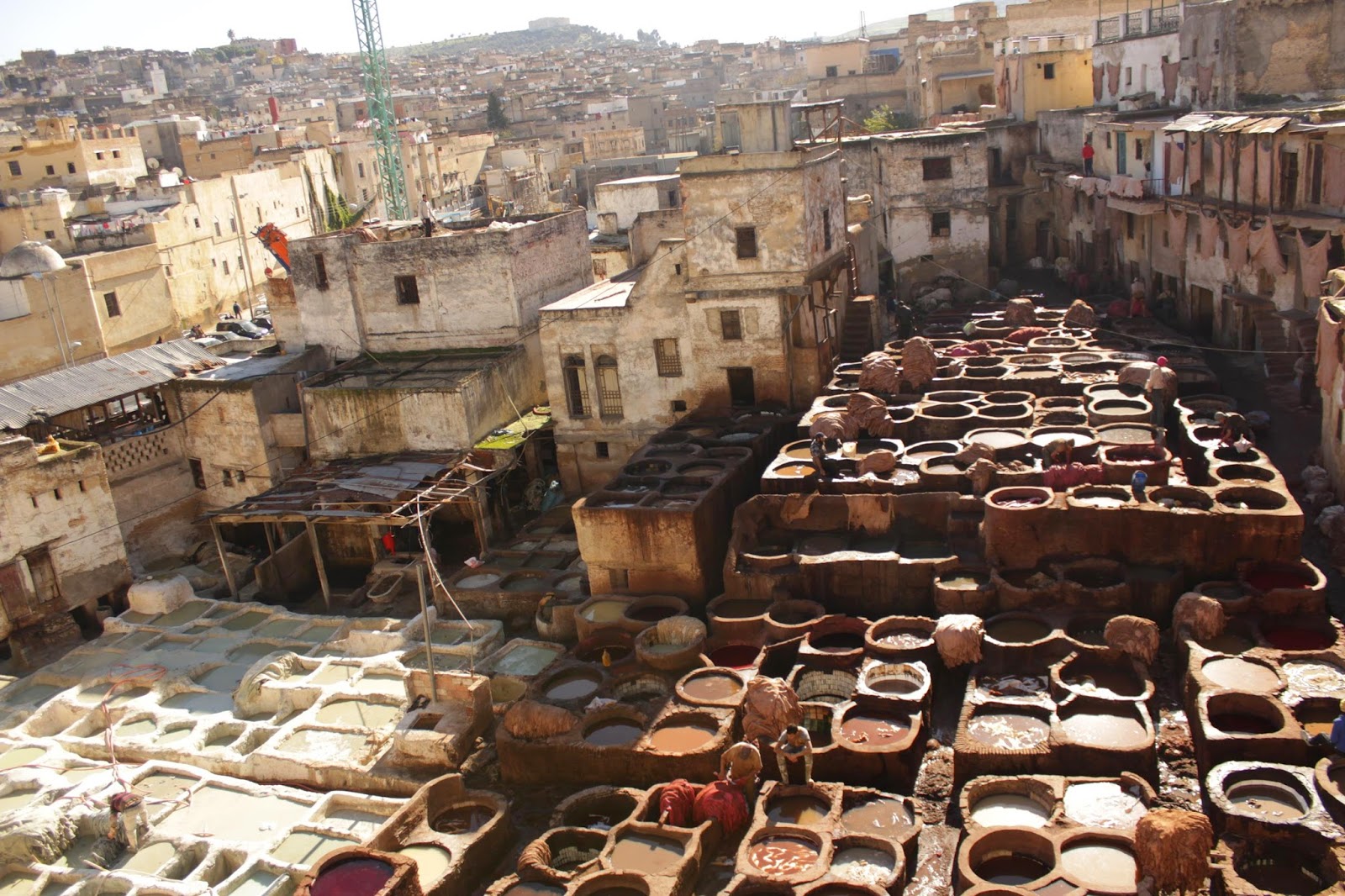 If you’re in Fes, you probably should make a visit to the Chouara Tanneries.
It’s one of these crazy places, which has somehow managed to stay fixed in time- still located in the middle of the old city (Medina), and still involving techniques and ingredients that have presumably existed for hundreds to thousands of years. 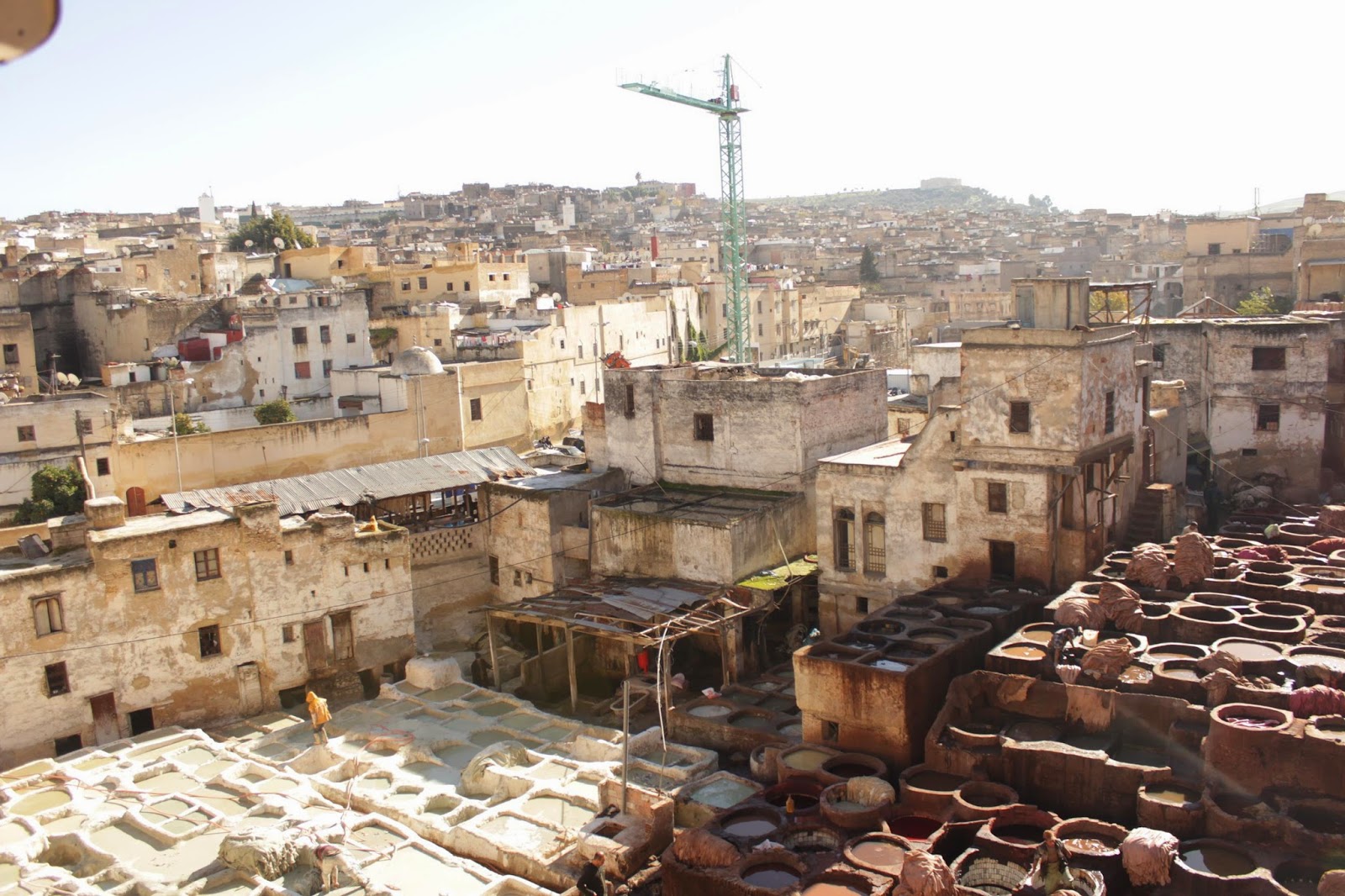 It’s one of these places that leaves you a bit with mixed emotions. The tanneries clearly serve a practical use- and the leather goods that emerege from the process are an obvious part of the city’s economy. Both the products made from the finished leather, and the tannery itself are also clearly big draws for tourists.
Furthermore, a job is a job- I read somewhere before visiting that kids actually eagerly collect pigeon droppings (one of the requirements for the process!) from around the city, in hopes of being apprenticed for the work.
But, of course, the working conditions don’t seem ideal. People doing manual labour that involves stomping around in fetid solutions. I wonder if they have a union?
While we were there we watched the people for a bit, and it was clear that some where in charge of the stomping, while others seemed to have more of a supervisory role. 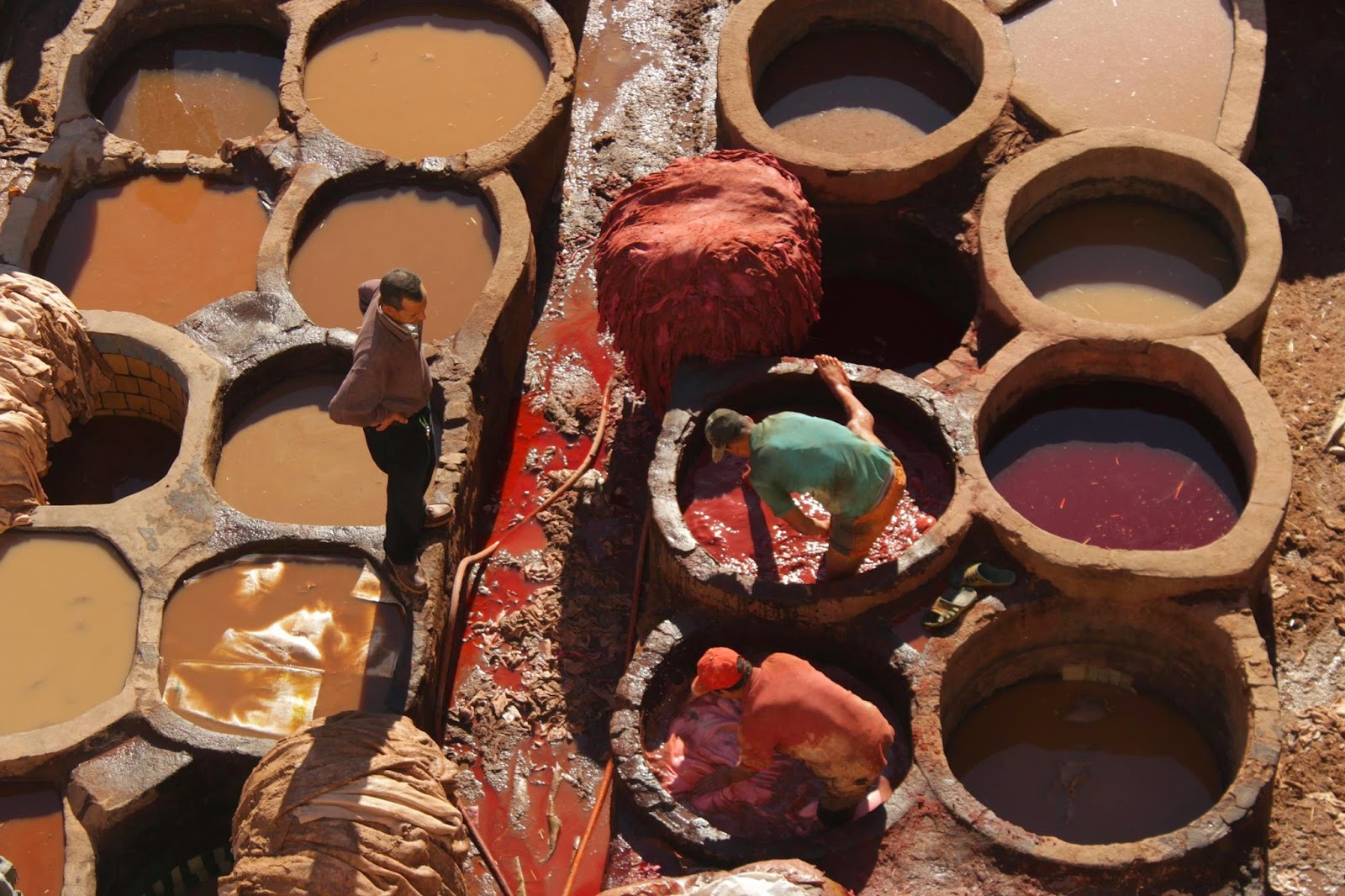 It left me wondering about power, money, and who’s getting screwed in all of this. 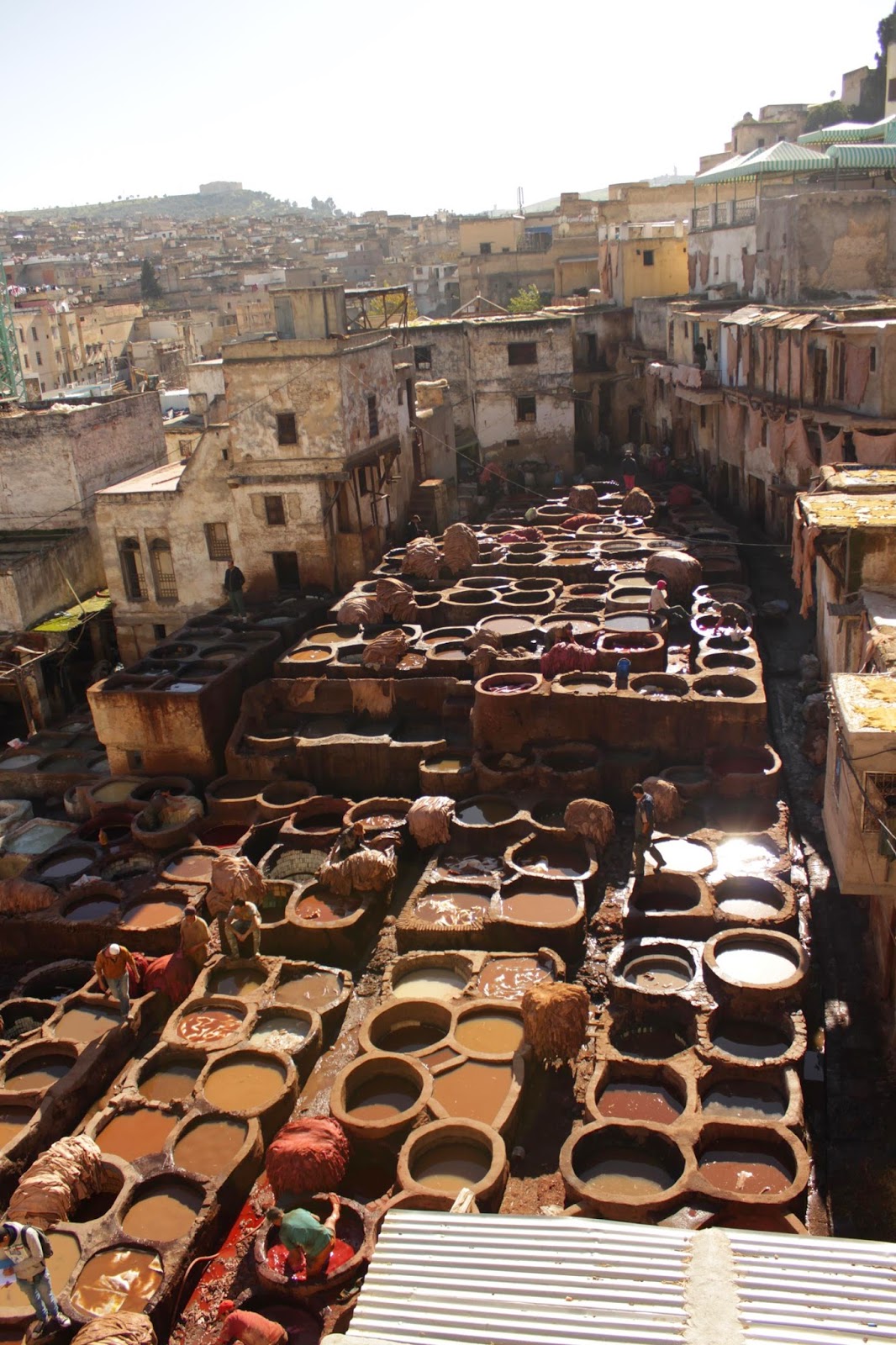 …Certainly not the tourists, who get presented with sprigs of mint on their arrival to protect their delicate sensibilities. 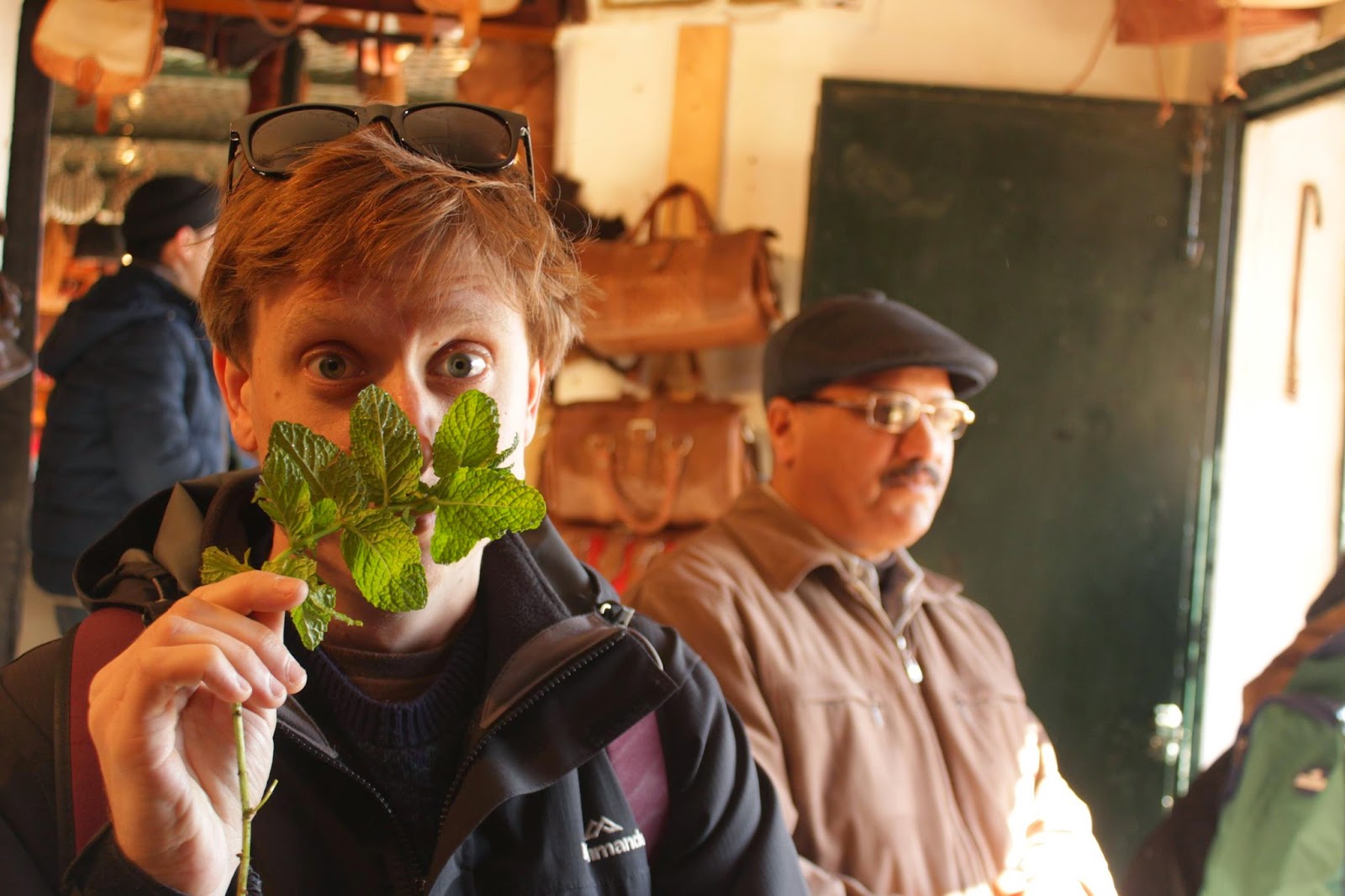 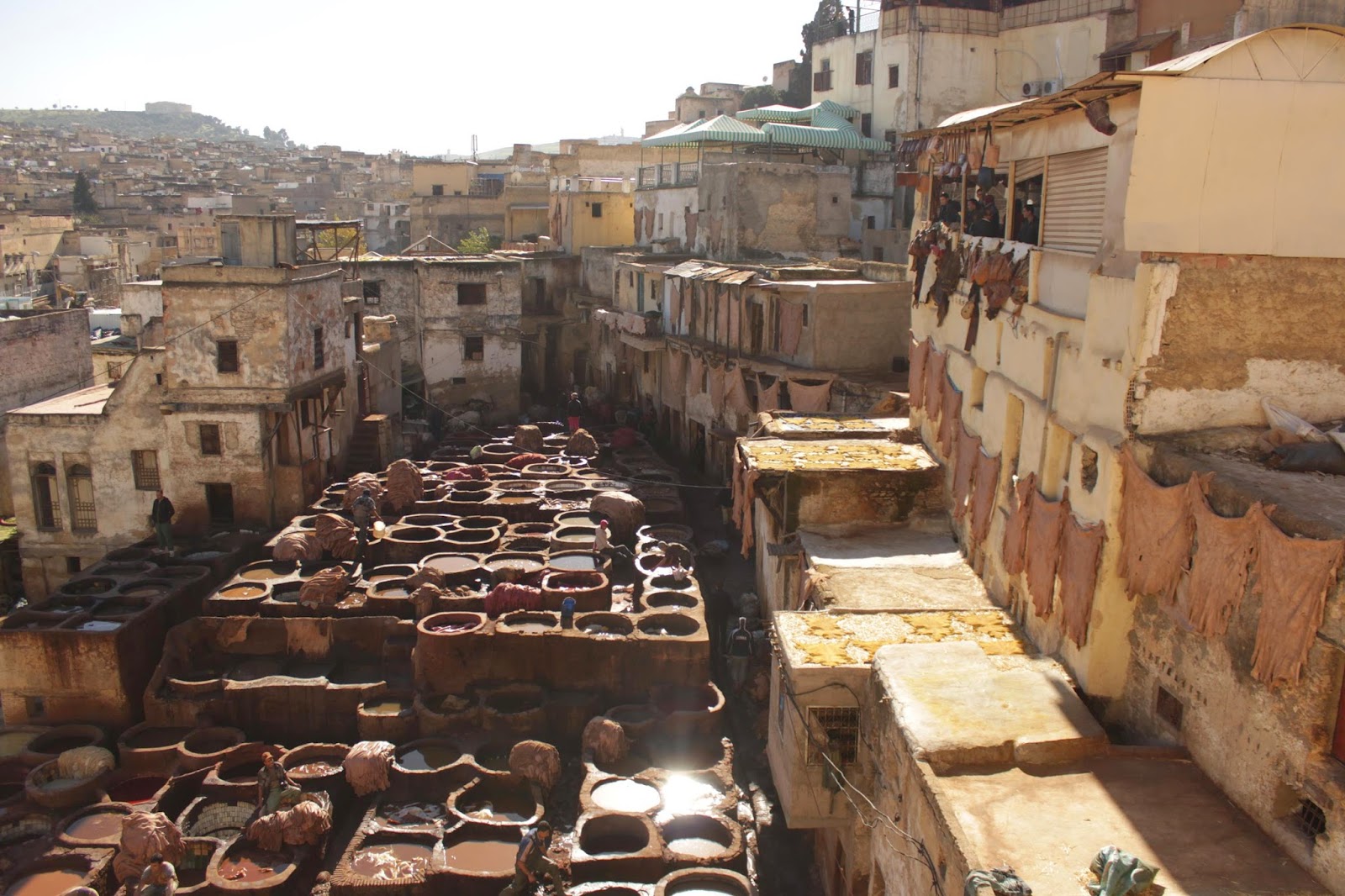 The view of the pits comes from a shop, so there are certain expectations. Despite this, we managed to leave without buying anything. (According to TripAdvisor, much as you’d expect, you can get better deals elsewhere in the Medina).

There are also certain children, hoping to lead you into the shops of their fathers instead of the shop with the view. Fair enough- although it did make us miss the pits on our first day in Fes. Partially our own fault, for trusting the wrong ‘the pits are this way!’at the fork in the road- we went with the kid instead of two teenagers. He seemed easier to escape from, and the teenages were leading down a particularly windy road filled with constructions- who knew that was the way. 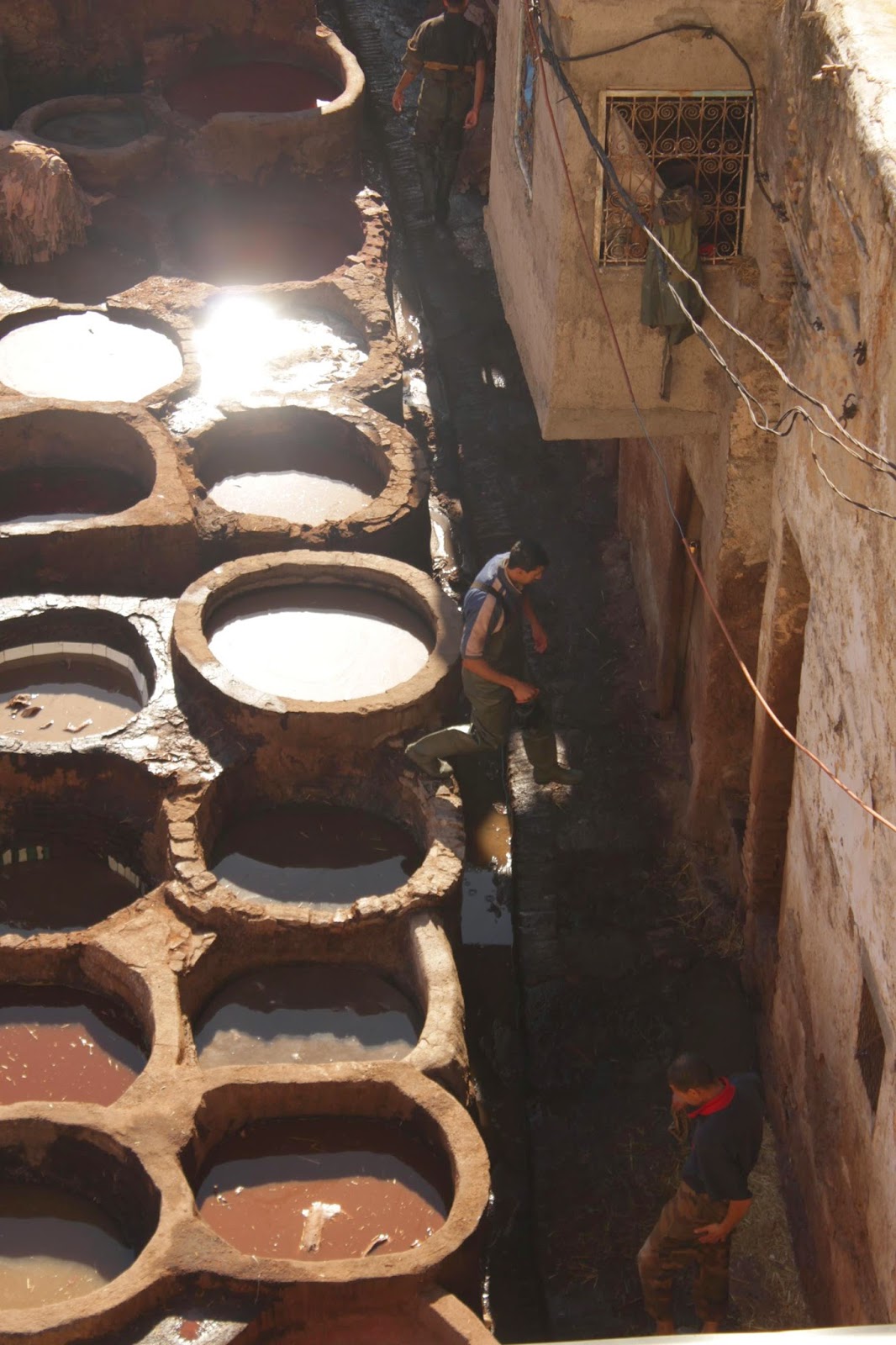 I read that the hides are soaked first in cow urine, lime, water and salt to soften the leather, and then in water and pigeon poo to make the hides more ‘absorbant’. The final soak of course is in dye, apparently taken from natural sources (poppies, henna, wood, mint, saffron and indigo)
Sure, it smells, but not as much as I expected.
These are the gentle pongs of bird faeces and urine, not those of blood, guts and bullschizer. 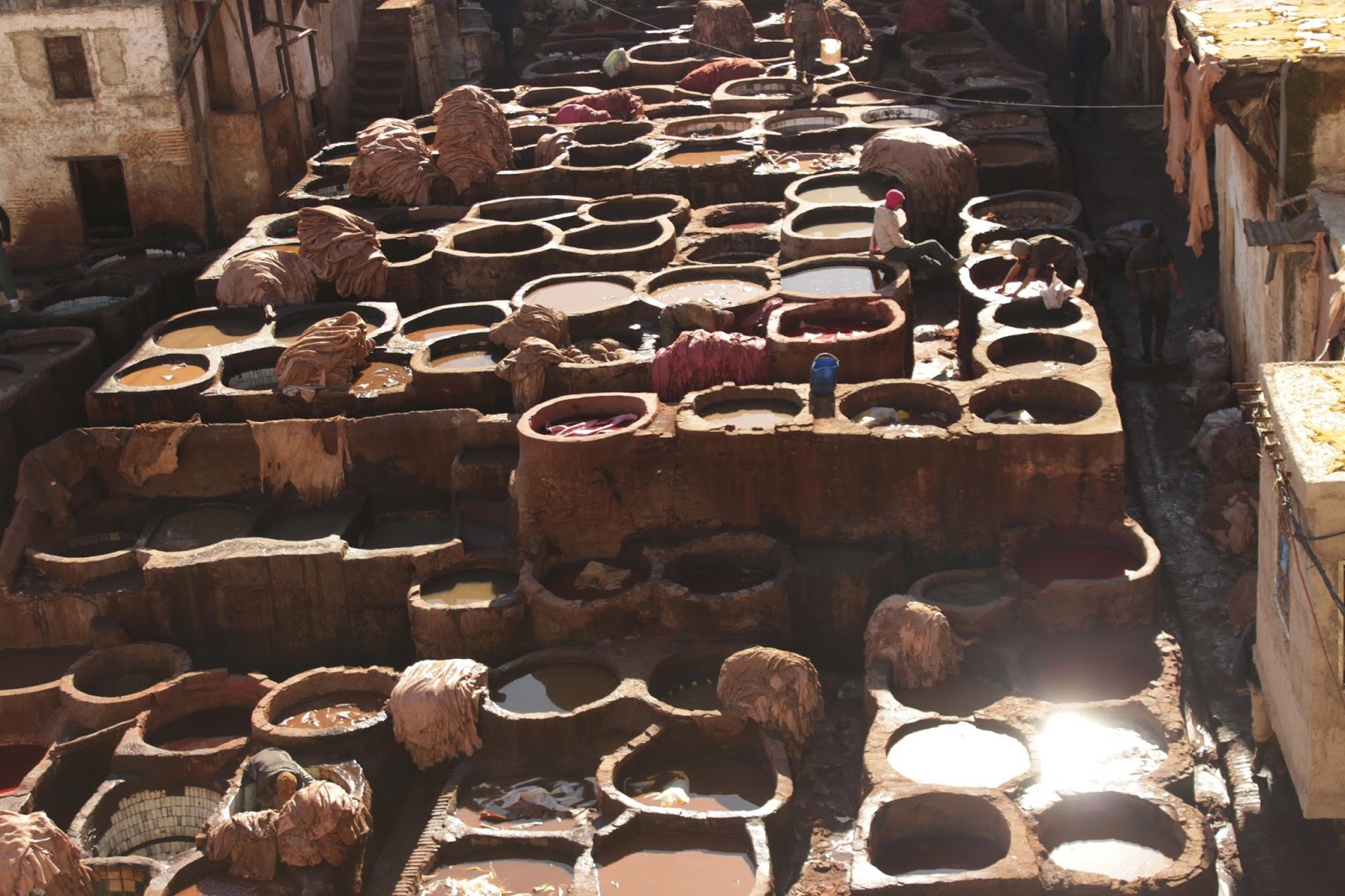 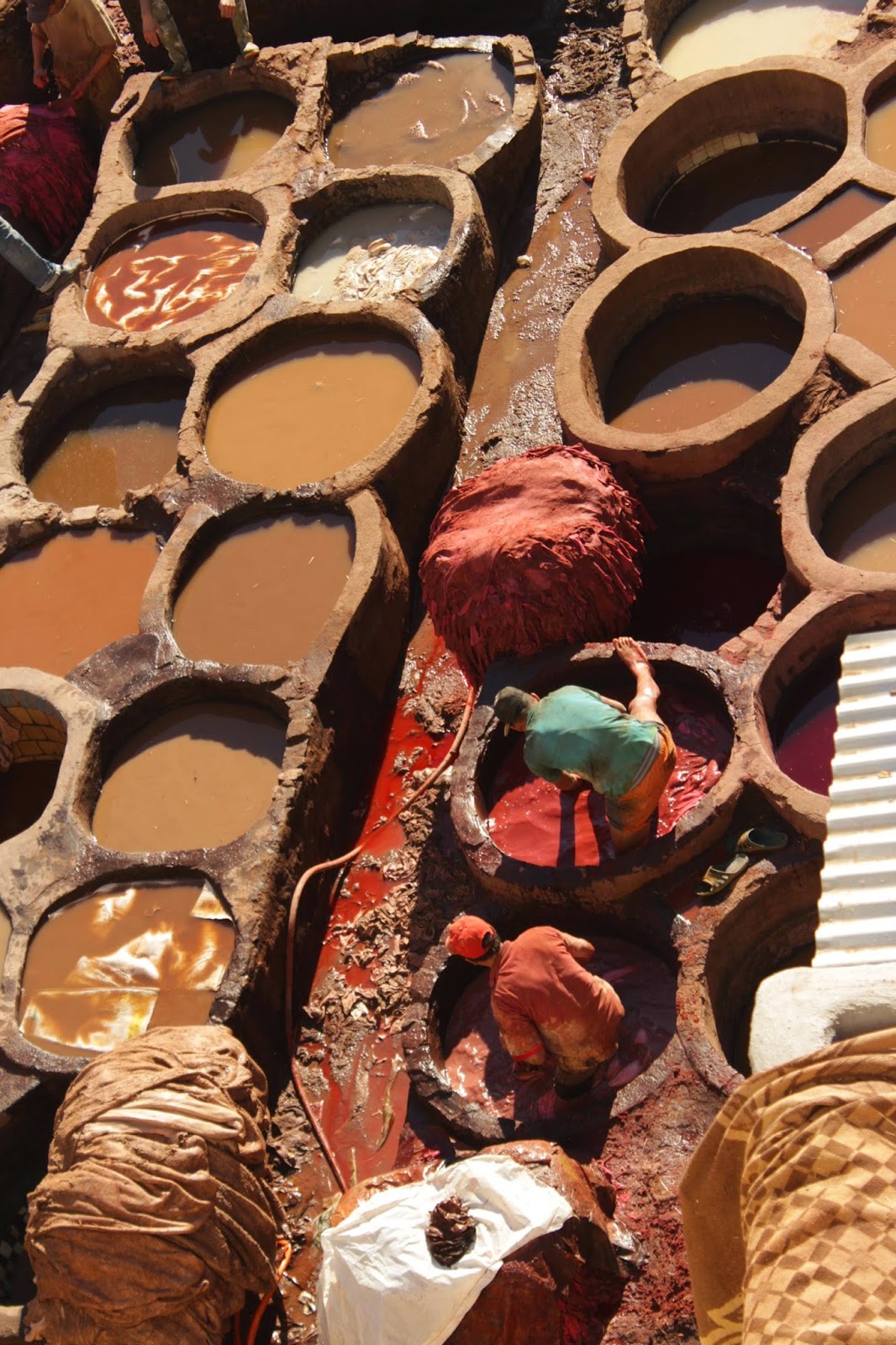 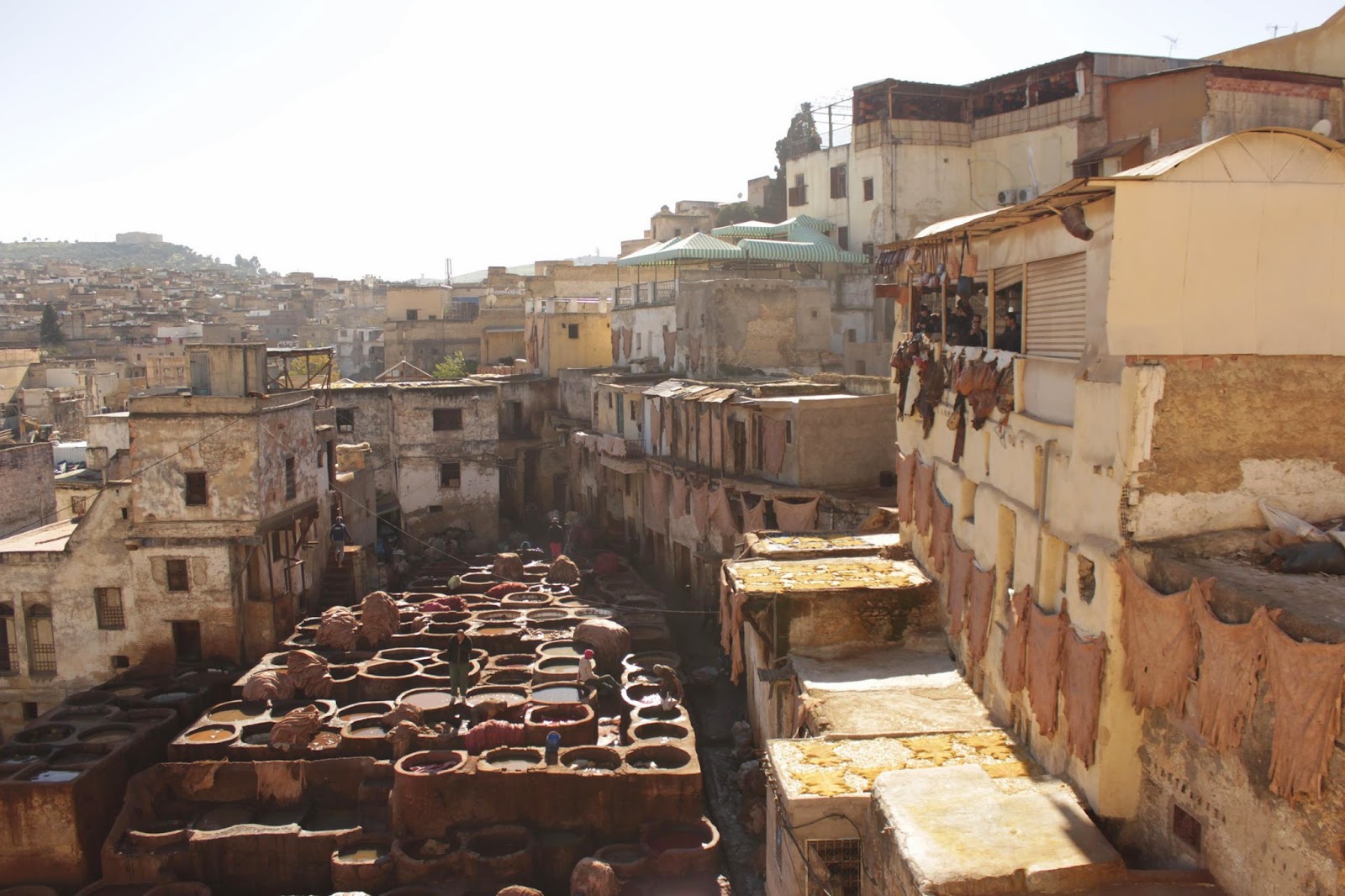 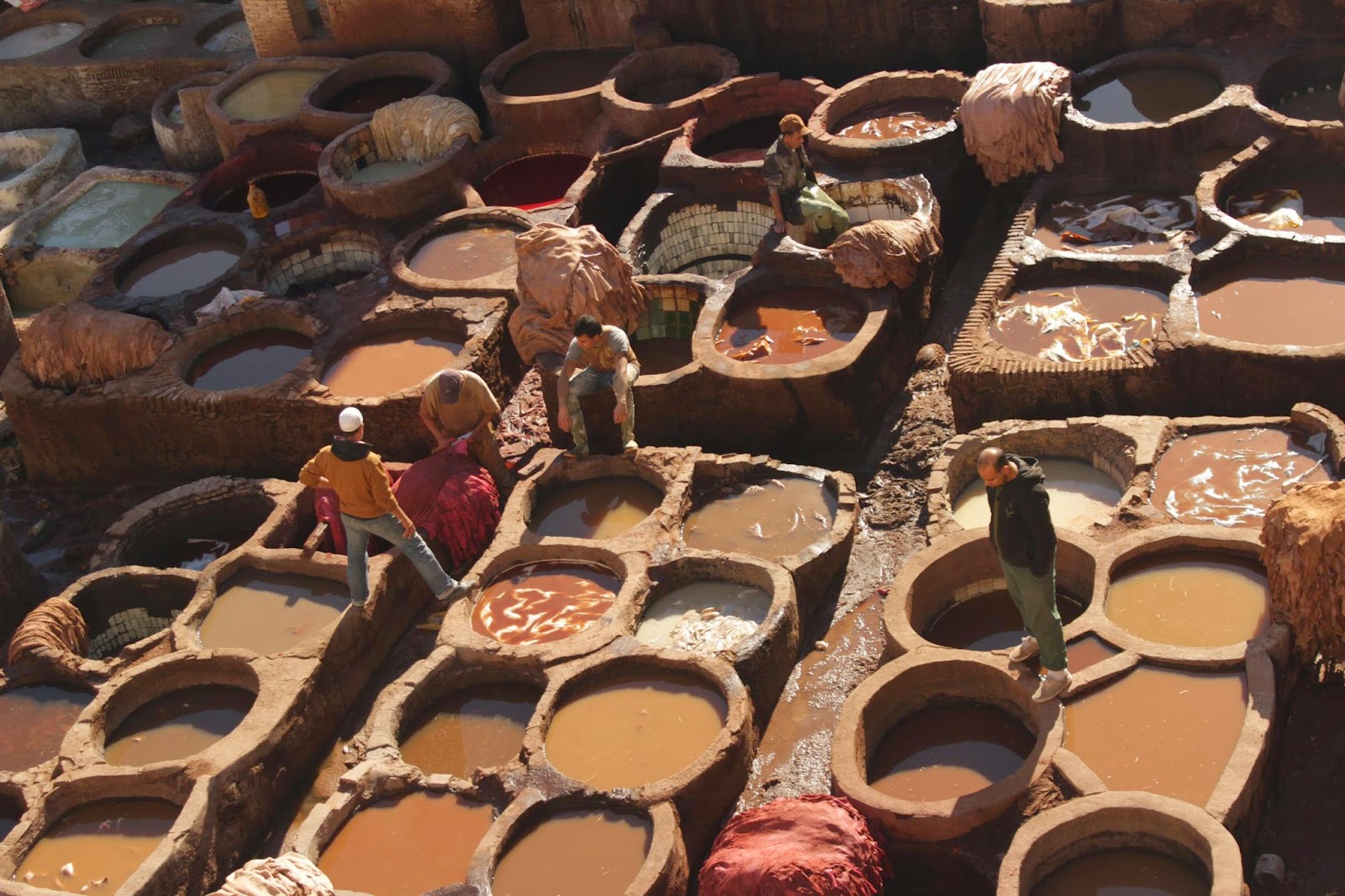 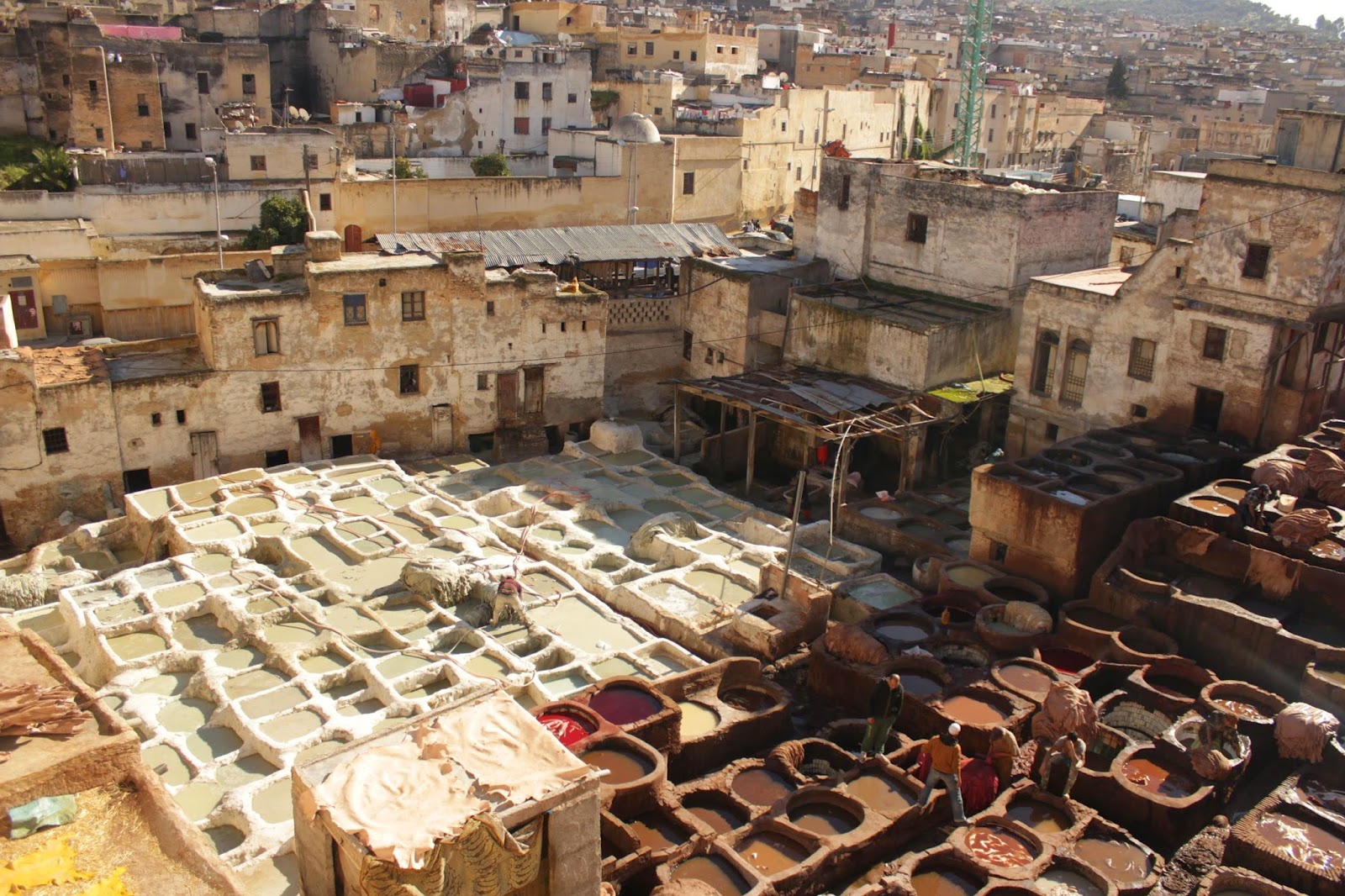 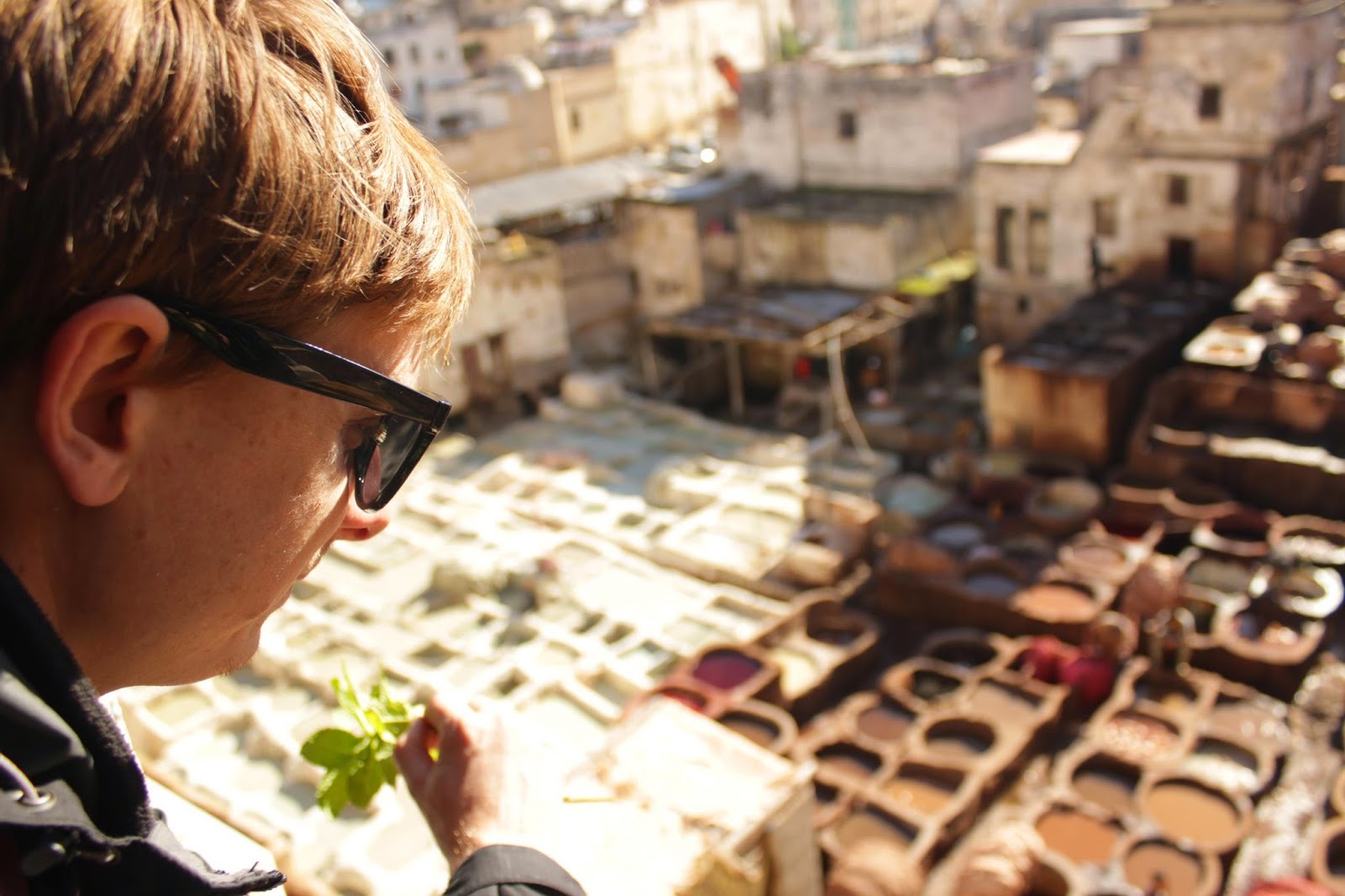 It’s a pretty cool sight to see. Especially given the disconnect we have between almost all of the finished products we have and how they’re made. It would be kind of cool to see the starting point too- when they actually rip it off the cow- but I suspect that’s not so charming to see, much smellier, and unlikely to be happening so close to the centre of the city.
Anyway, if you’re in Fes, check out the Tanneries. 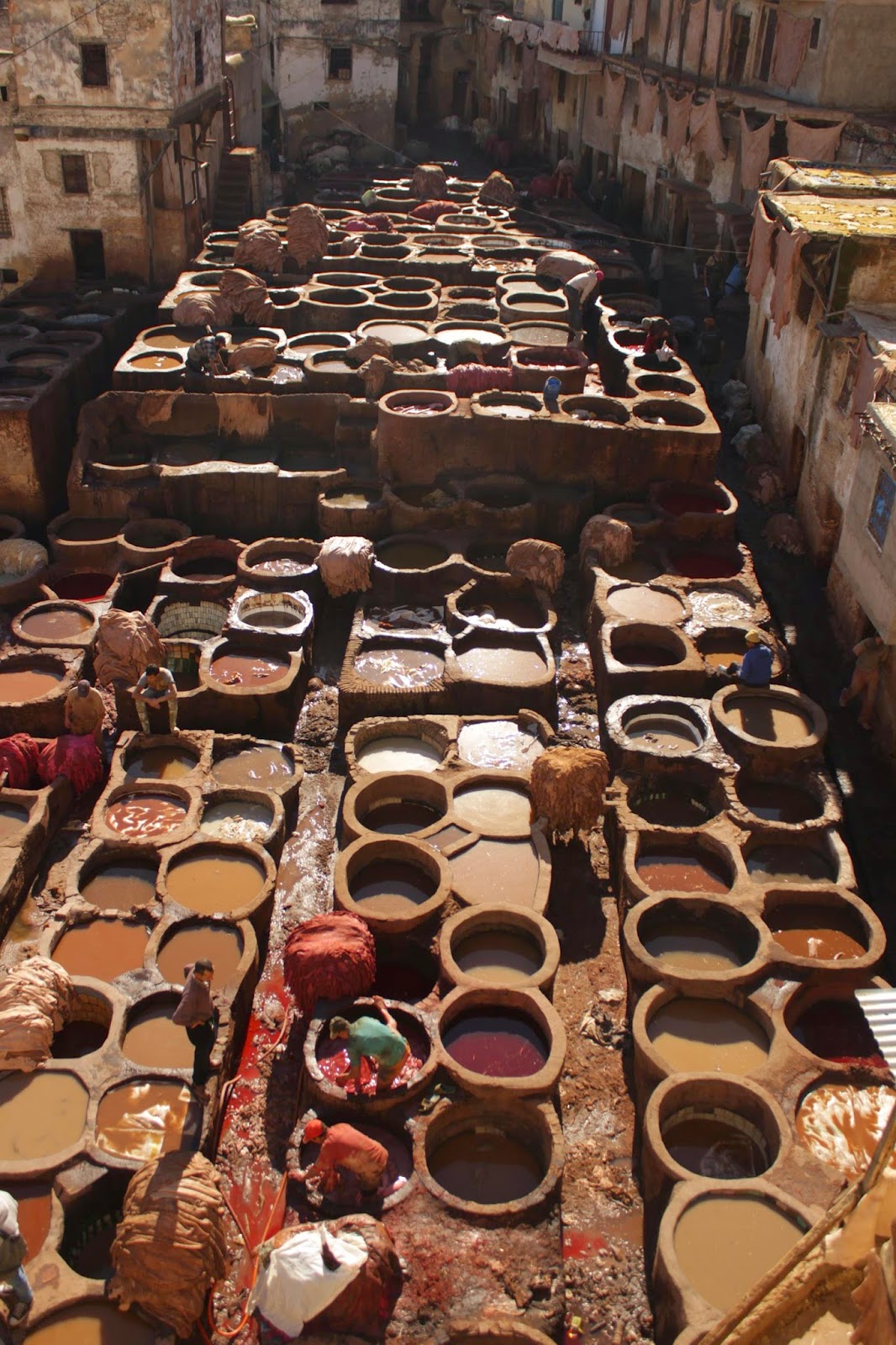 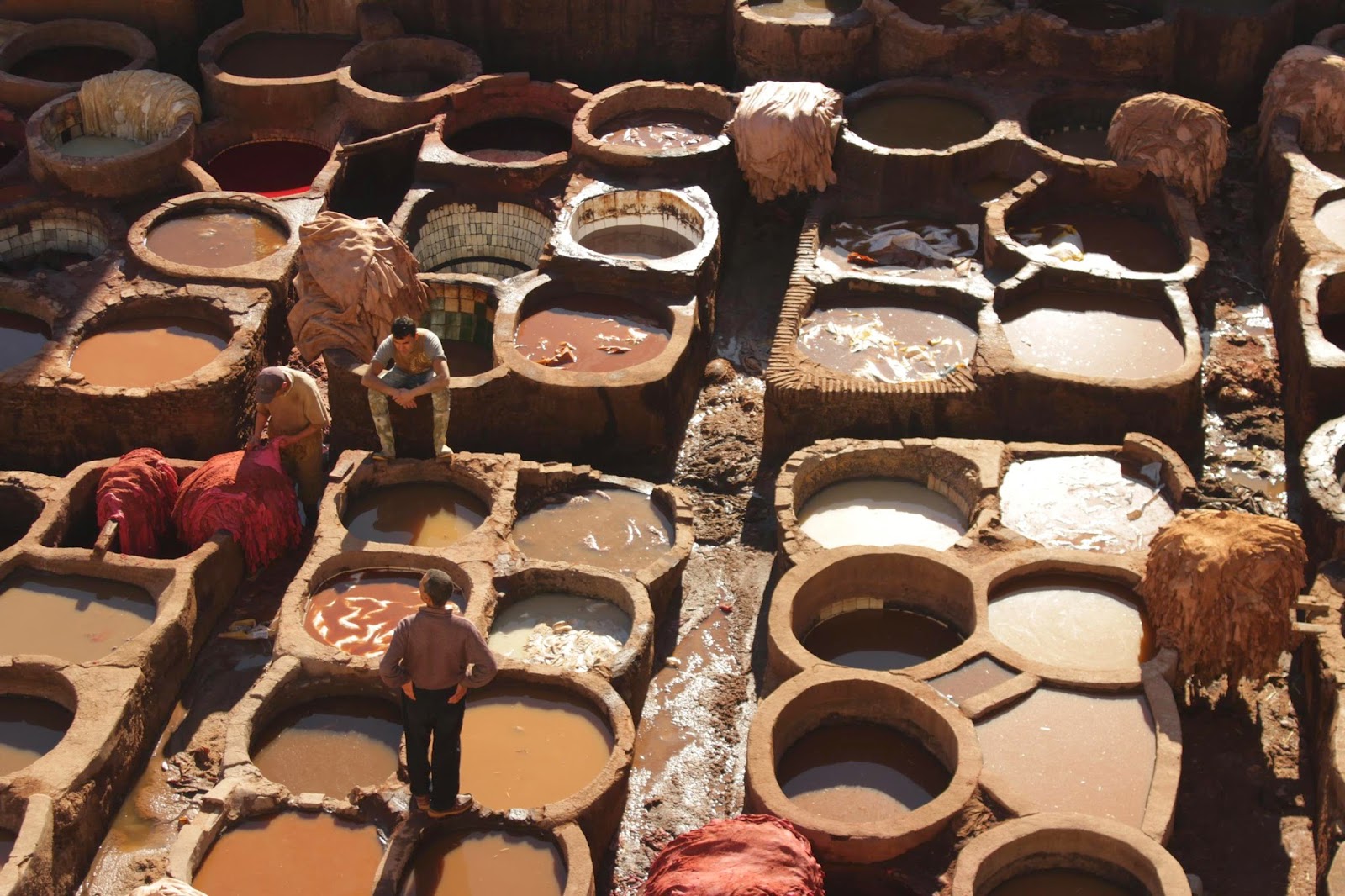