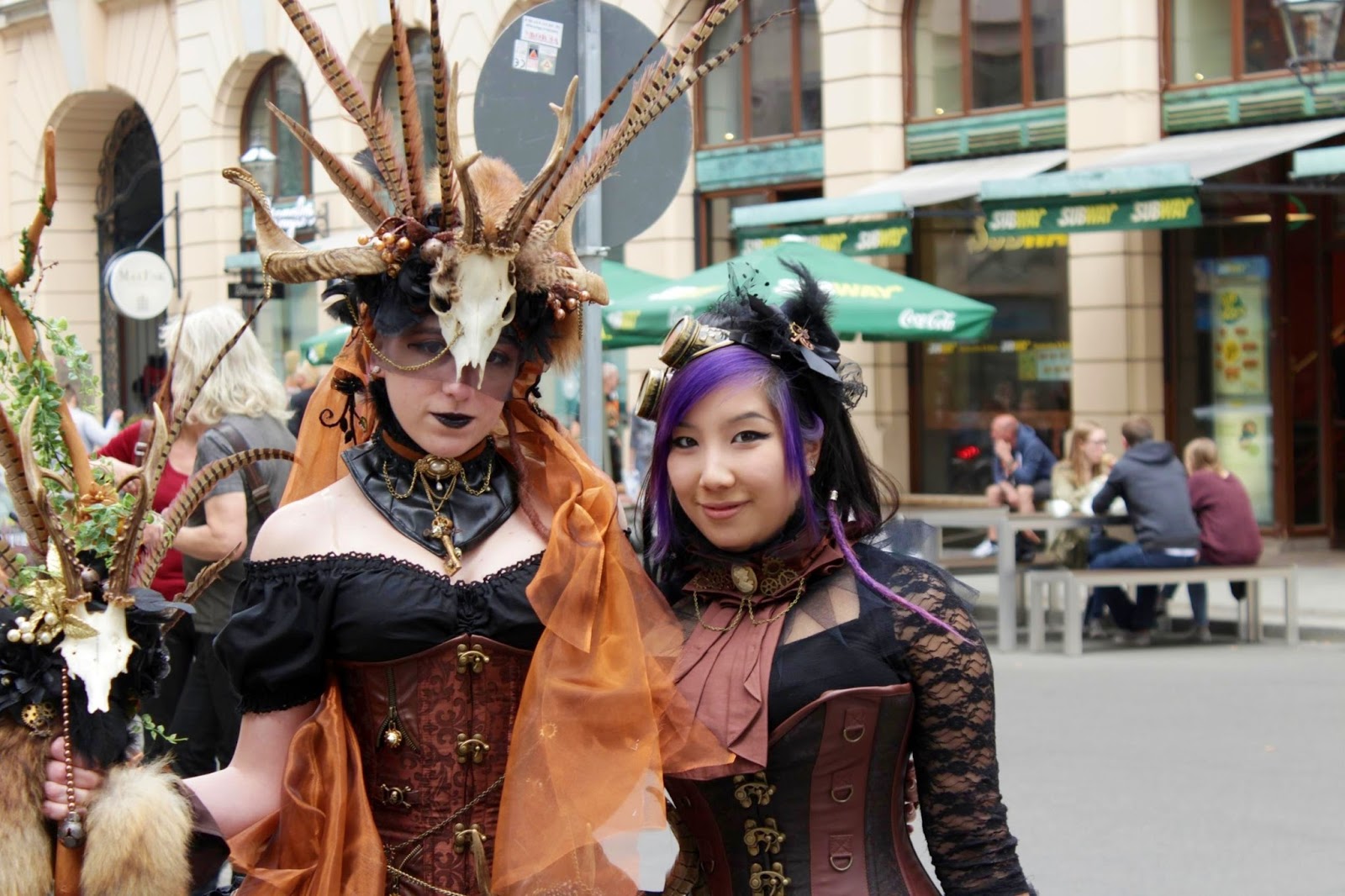 Andy and I are miserably bad at timing our holidays.

travelling to Darwin Australia in the build-up: the horrible period between the hot-dry and the hot-wet, where every day gets more and more humid and hotter and hotter, until finally it breaks with a thunderstorm. I lie to you not- the first drops of rain fell as we caught the bus to the airport.

travelling to Indonesia at the end of Ramadan: which is apparently when all 250 million Indonesians take a holiday and travel to visit their family. Try finding a train or accommodation. Try being the only strange little white kids at a public monument.

deciding to spend a long weekend in Stockholm when 1 direction were there: travel north on the train 1 hour to Uppsala. Get a bus back south-ish, past many fields. This will be your accommodation for the evening.

Booking train tickets before looking at Leipzig accommodation, before realising that we had planned to visit during the weekend of one of the largest Gothic-Steampunk-Rivethead music and art festivals in the world (20,000 attendants), was one of those moments. 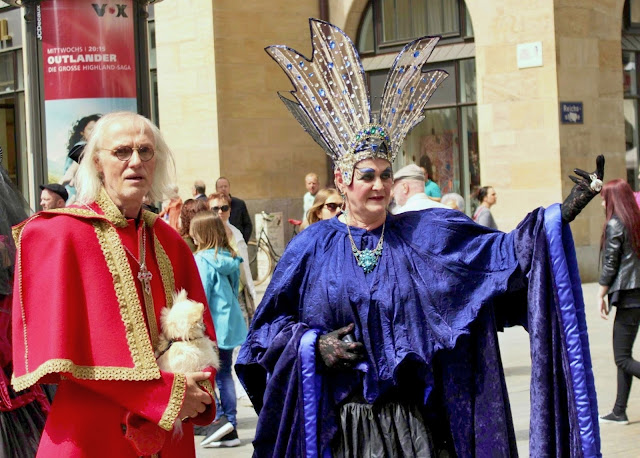 We ended up paying a slightly exorbitant price for accommodation, but in the end it seemed like a fair deal for such a beautiful and elaborate spectacle.
I think by the end, Andy got a bit tired of all the black, and pointed out that this weekend was not perhaps Leipzig at its most Leipzig-y.
But anything with costumes is ok by me, and the diversity here was just breathtaking. As you can see*, ‘Gothic’ (and the many subcategories therin) does not just mean a black tee and skinny jeans.
*P.S. sorry about the terrible quality of the photos. I only had my kit lens (ugh!) and anyway had to decide fairly early on to spend our Leipzig weekend seeing Leipzig, not just photographing beautiful people. There were many photographers running around, so if you want to see some real shots, just google wave gotik treffen. 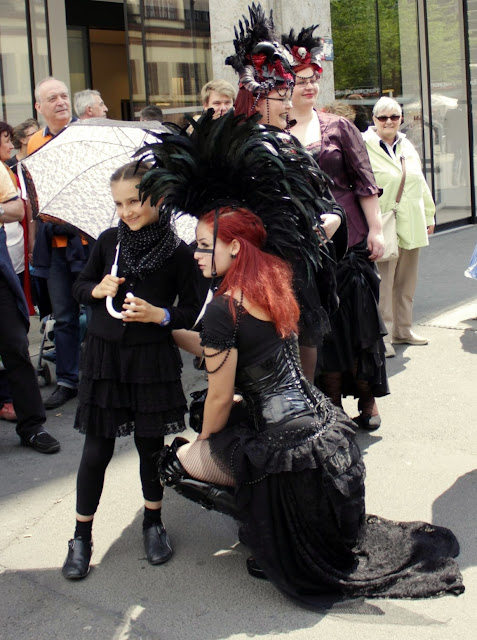 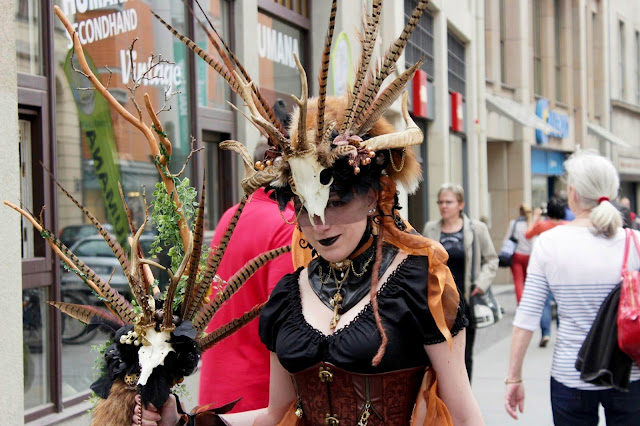 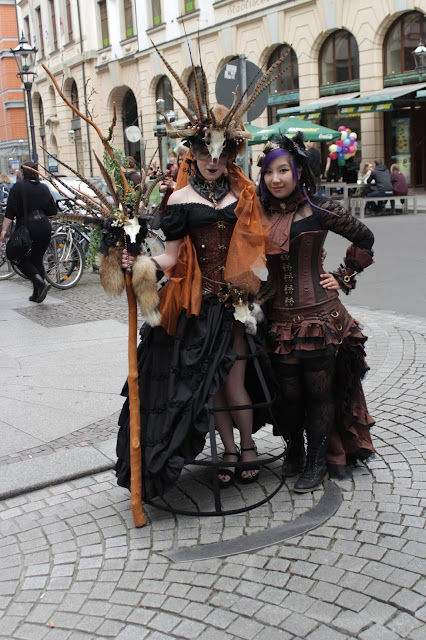 What I loved even more than the diversity of style, was the diversity of subjects. This event was not one held by only under-20 flocks of women: old and young, men and women, people of all kinds were investing in the spirit of the event. 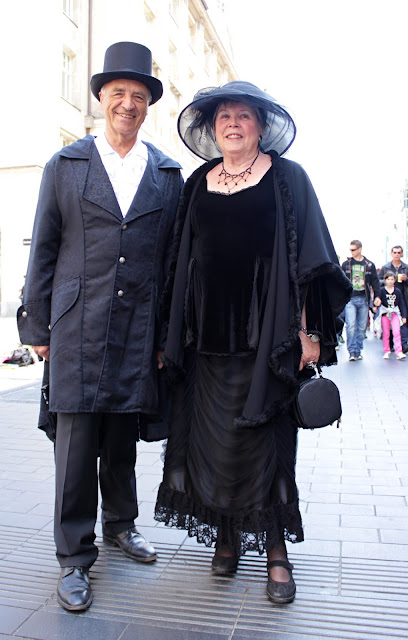 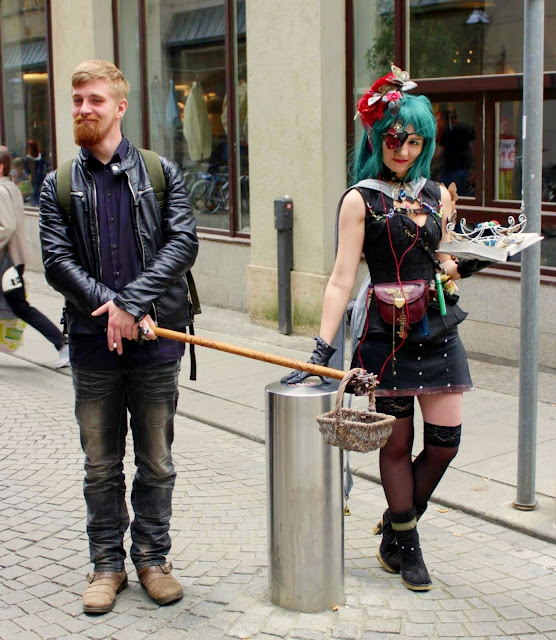 Moreover, it wasn’t just a few participants in a sea of normals. If you walked anywhere in the city center (and down the main arcade in particular) you ran against a constant stream of creatively-costumed creatures. 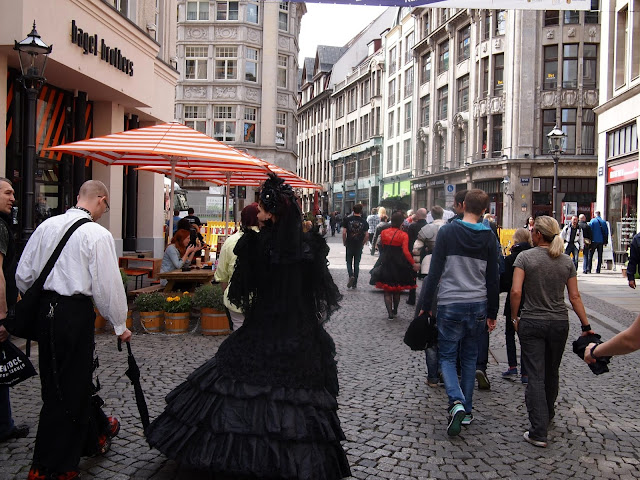 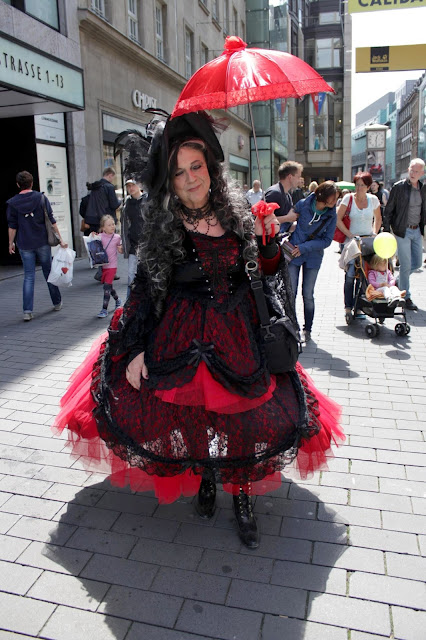 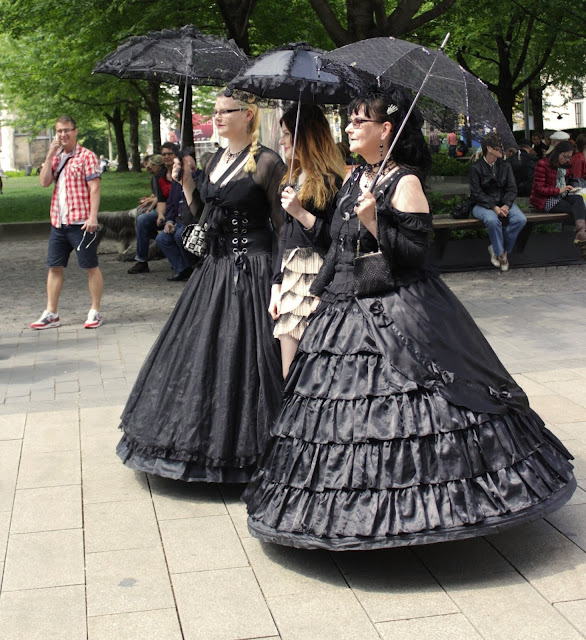 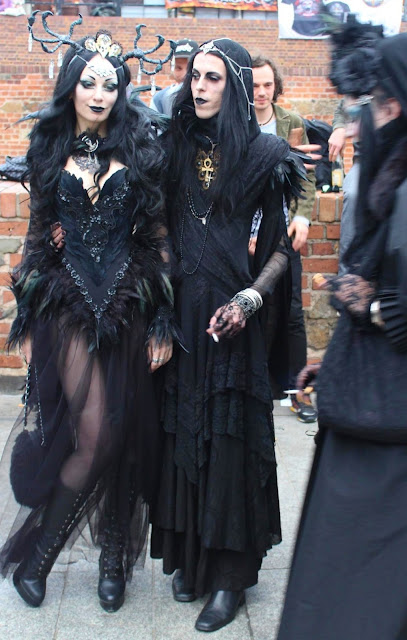 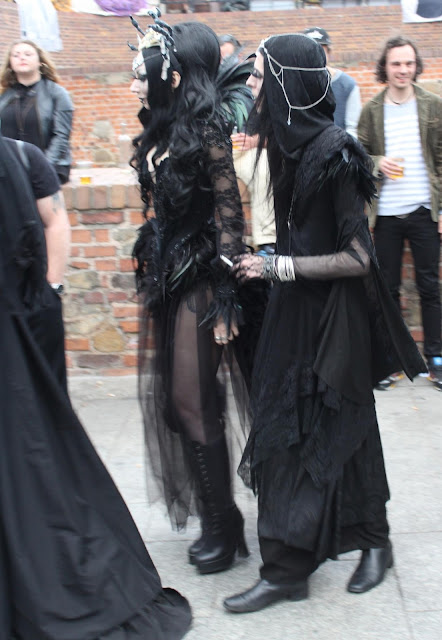 It should give you an idea of the size of the event, to see that many of the major brands tried to get in on the cashflow! Here’s Maccy-Ds and H&M, but nearly every store had some sort of WGT merchandising going on that weekend. 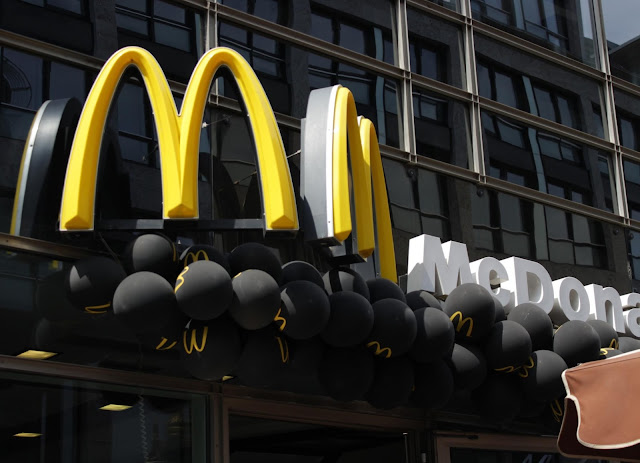 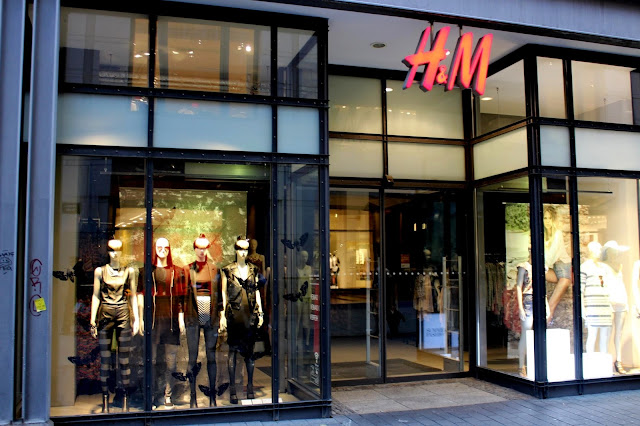 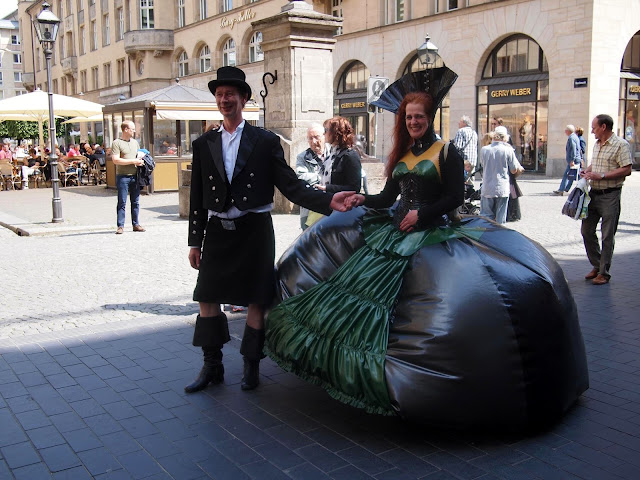 Let’s end on this guy again, who was one of my favourites in his home made Steam Punk outfit. 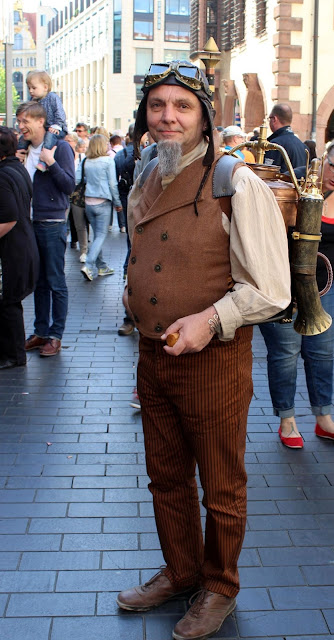 The WGT happens annually in Leipzig, Germany.
At the WGT, people would often stop for a period of time to allow photographs- nonethelles, Please Keep in Mind that ‘Cosplay is Not Consent’– try to ask permission before you get your snap.