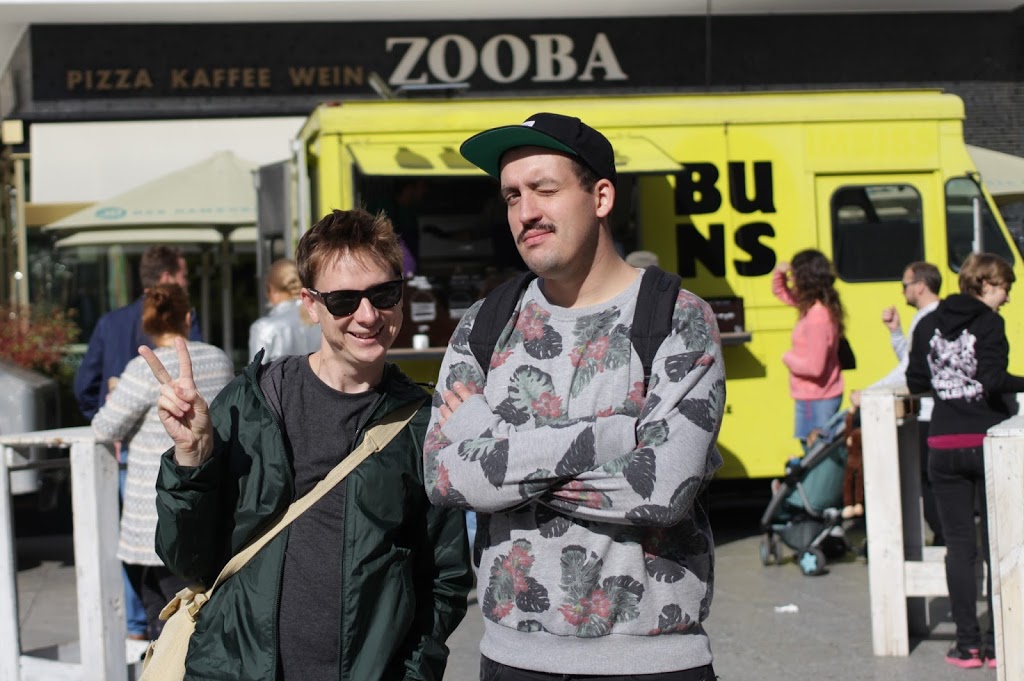 This past weekend was a pretty amazing Food Gorge Session for Andy, Szym* and I… 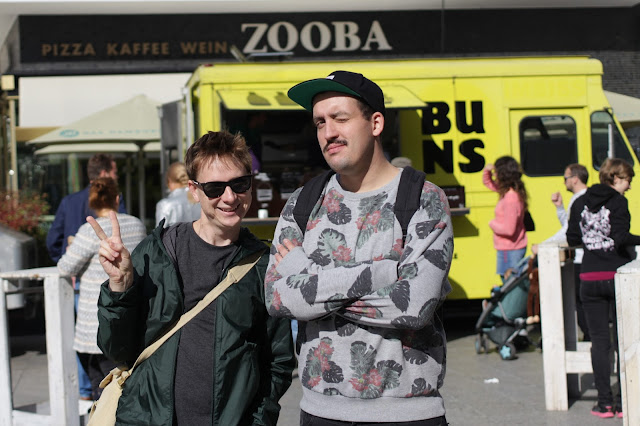 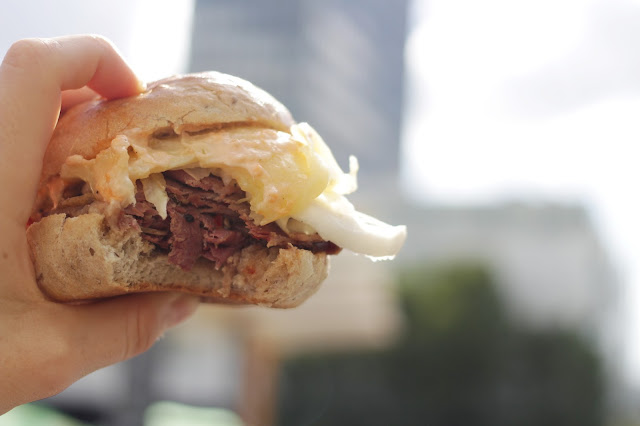 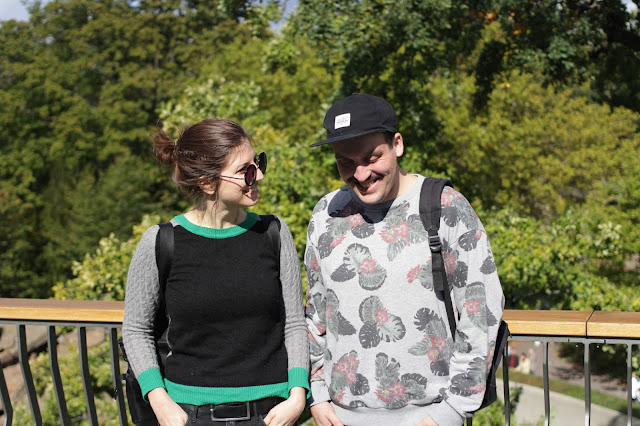 * For those of you playing at home, Szymon is a Polish-born, Aussie-naturlised friend of ours, who we first met at our old work place in Perth, while he was doing his Phd and Andy and I were Phding/Honour-ing respectively. He recently moved to Berlin to work for my boss, and I have to say it is amazing to have one of our ‘Australian’ friends so near.

The weekend began, as weekends often do, on Friday evening, when we stat down to some really great Indonesian food at Tuk-Tuk (U-bahn Kleistpark).

I’m sure I’ve complained a lot recently about how I really miss Indonesian and Malaysian food in Germany- which seems to be completely underrepresented. Tuk-tuk had a fairly solid Rendang, as well as Satay, Gado-Gado, Murtabak(!!) and more. They also had some sort of Sambal Ikan (chili fish), but we didn’t try it this time around. Clearly, we have to go back- and next time I’ll take some photos to share with you, so I can rave about it a bit more.

On Saturday, we rolled out of bed at 11, and gradually made our way down the street to here: 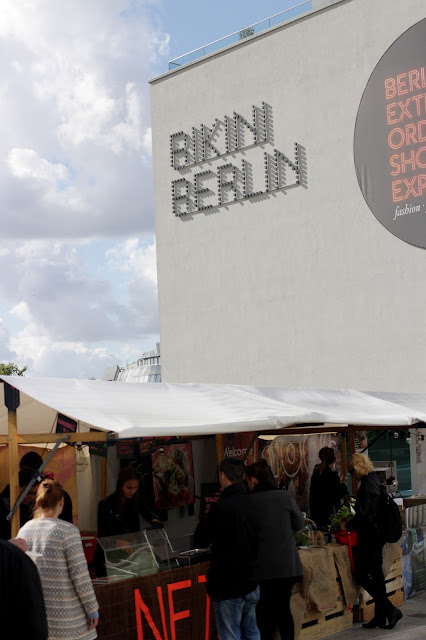 Bikini Berlin is a strange place. Firstly, I’ve never seen a shopping centre so heavily promoted! Despite this, and the fact that it’s actually on our way home from work, it still took me a significant amount of time to work out that bikini was in fact, not an item of clothing, and was instead a kind of ‘startup concept space’.

Beyond that, it cool, and often beautiful, but I oscillate between appreciation and derision (is it trying too hard??).

The shops are in little cages, they rotate every few months, and there’s some local designs as well as bigger brands. Oh yeah, and you can watch the monkeys in the zoo from the rooftop!

But it’s an odd use of space (lots empty), and the whole thing often lacks customers.

Anyway…when we rocked up the was a kind of farmers’ market going on inside: 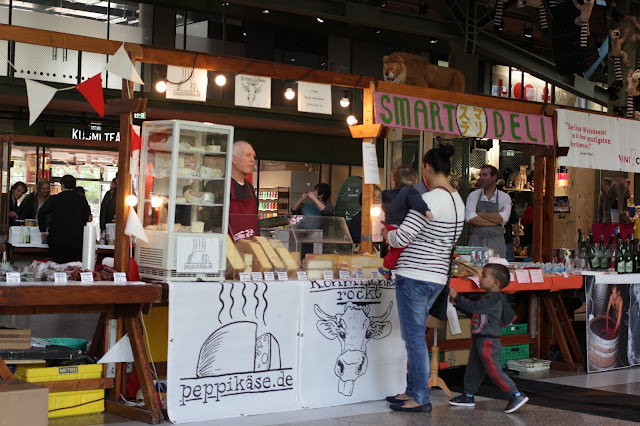 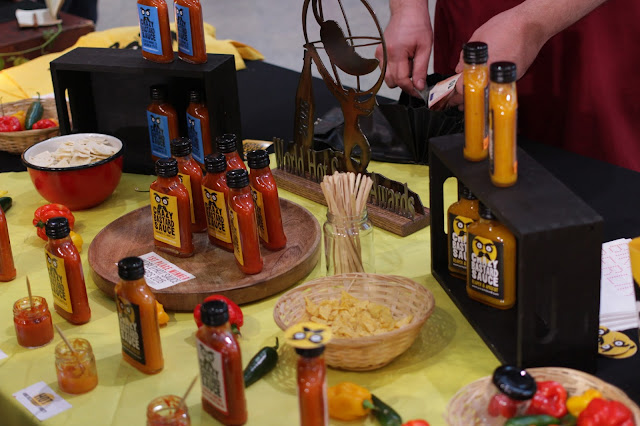 But, so far, a bit low on the actual food.

Nonetheless, I managed to grab a rather un-photogenic but super moist and tasty vegan, gluten free carrot cake.

You couldn’t even taste the ungluten! 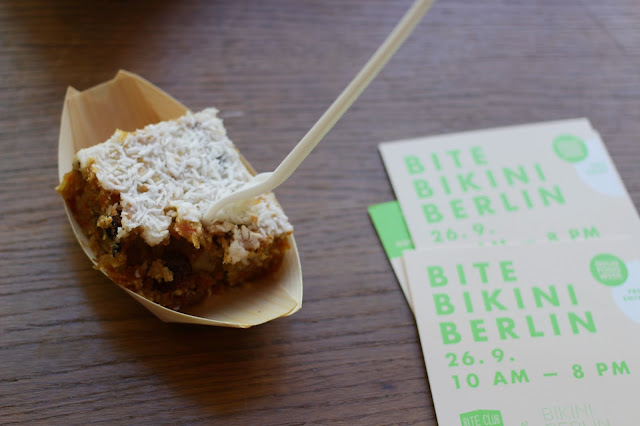 Luckily, while we had been sleeping, Szym had been scoping. He quickly switched to swooping, and, taking us under his fluffy wing, guided us via (more hipster) nic nacs and coffee, to the Great Outdoors.

First to the food trucks out the front of the building, and then to the Roof. 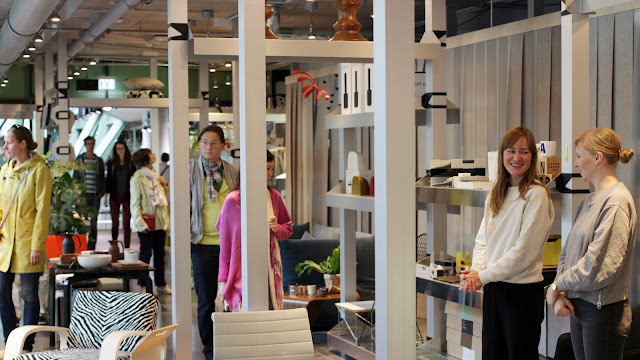 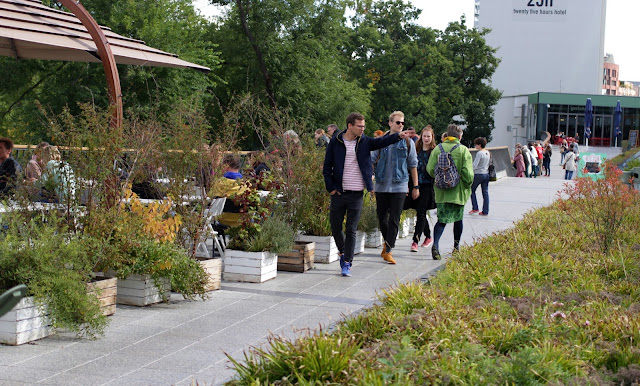 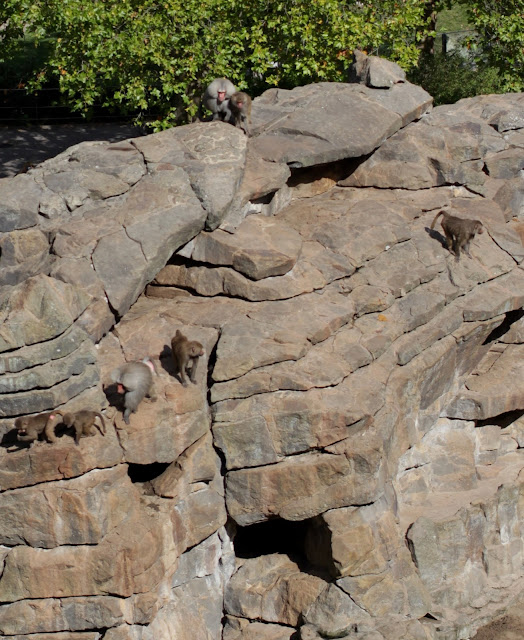 The roof held 6 or 7 more stands, but these ones contained less produce, and more ‘eat it now’ kind of snacks. 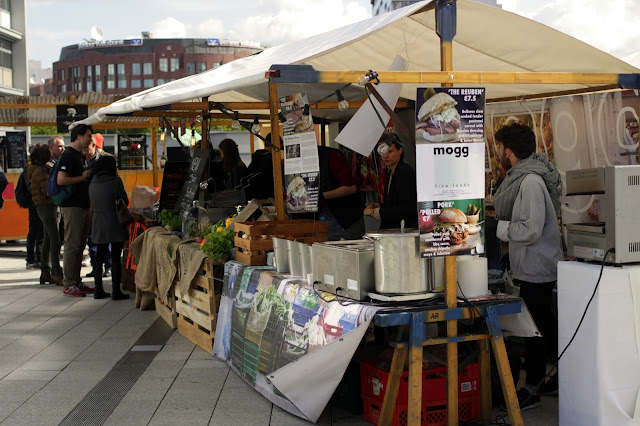 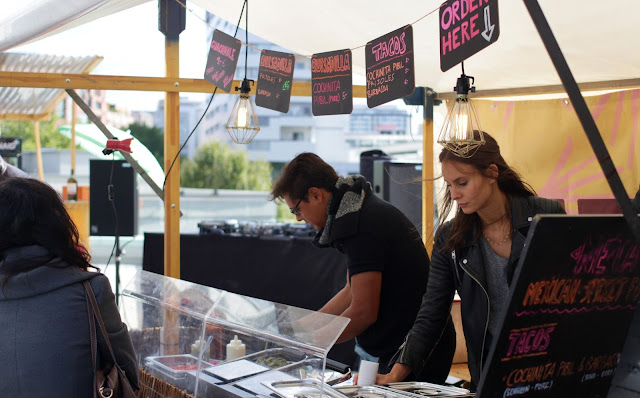 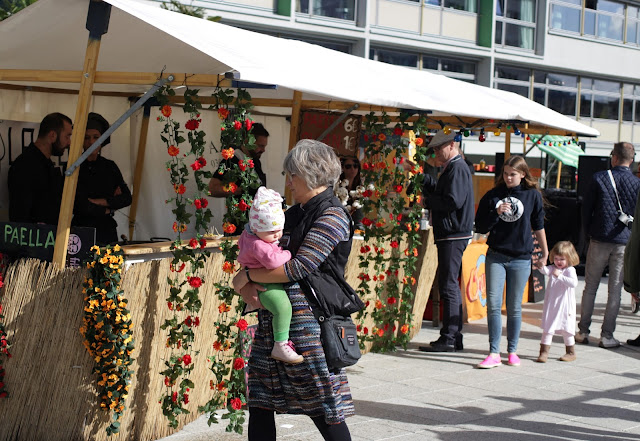 I was pretty conviced by the pastrami, cheese sandwich (Reuben)…. 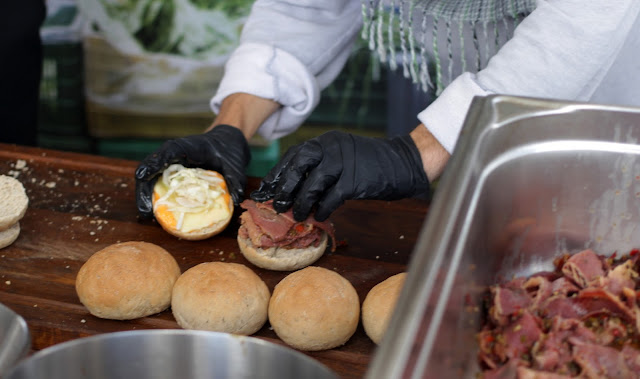 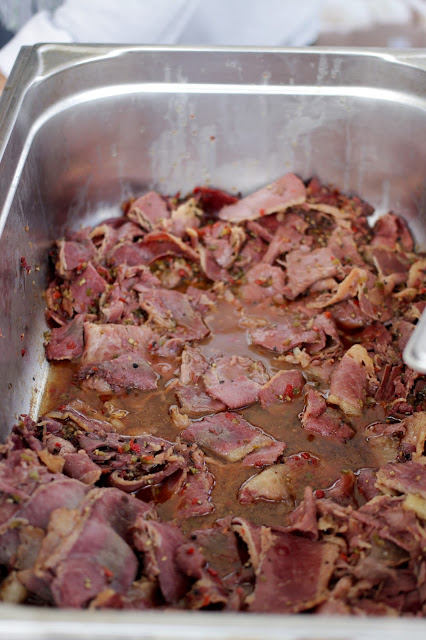 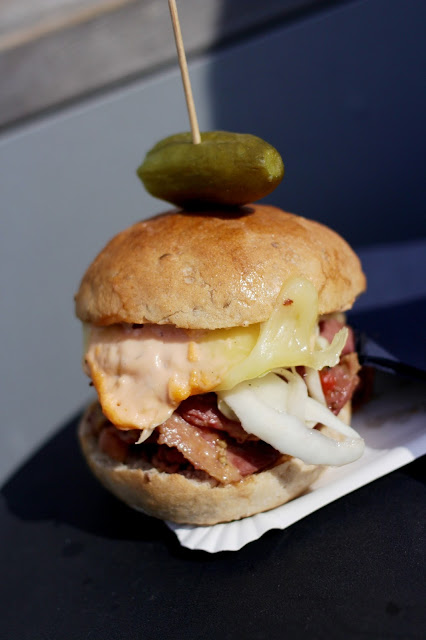 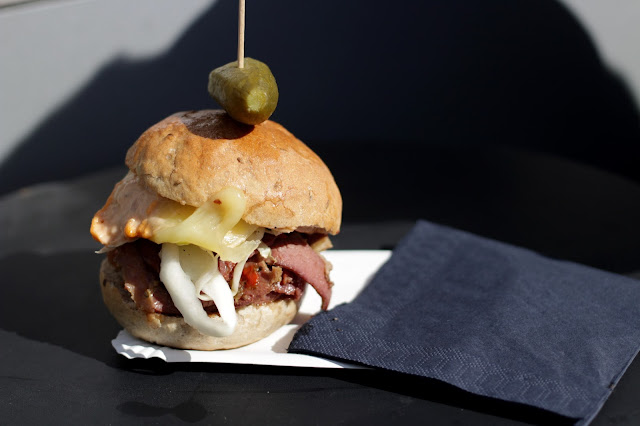 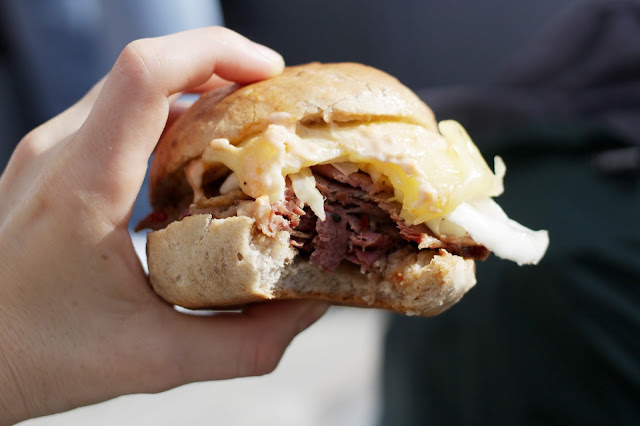 … Andy, as always, went straight for the fried chicken. 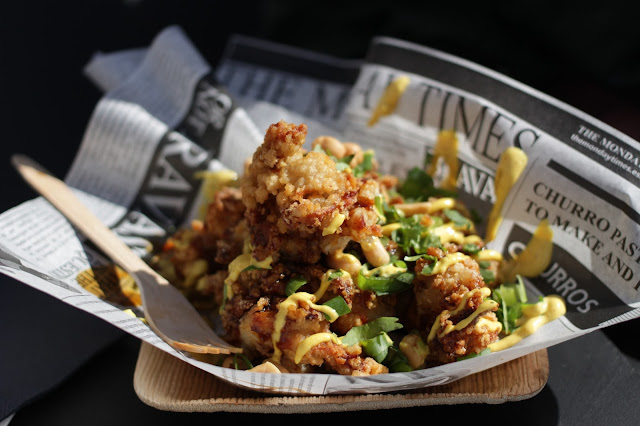 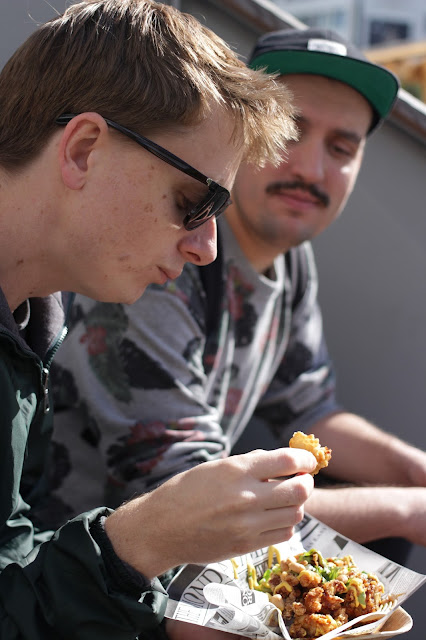 And so, we sat and sipped and soaked the sun and supped.

We chatted and watched people mill, clouds ominate (I’ve decided that’s a word- it’s when they look like they’re about to become rainy), and birds fly over head. 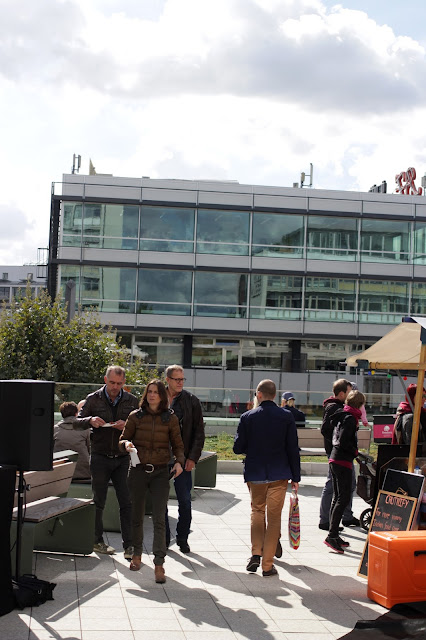 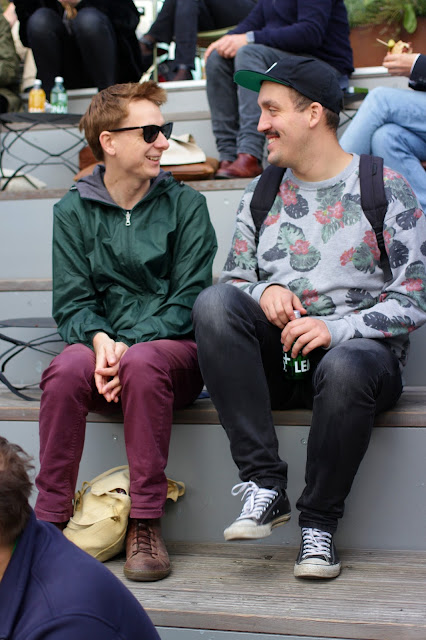 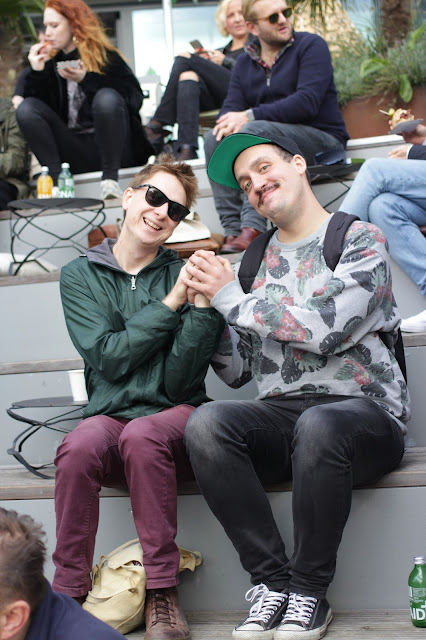 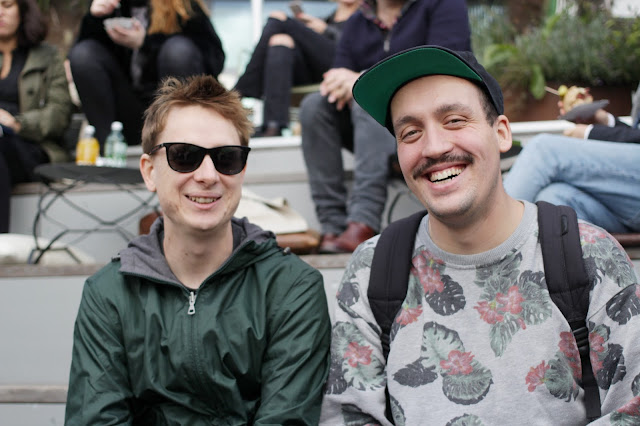 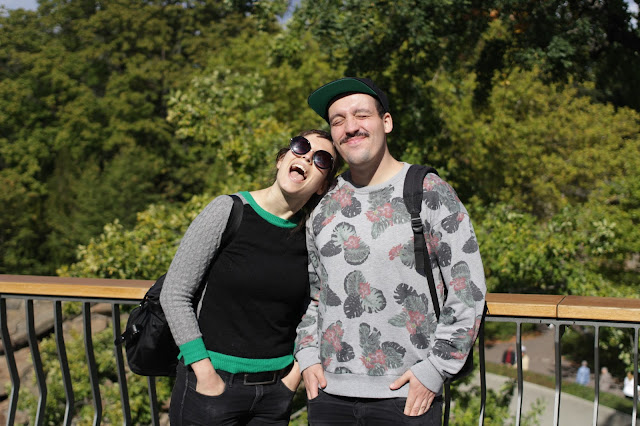 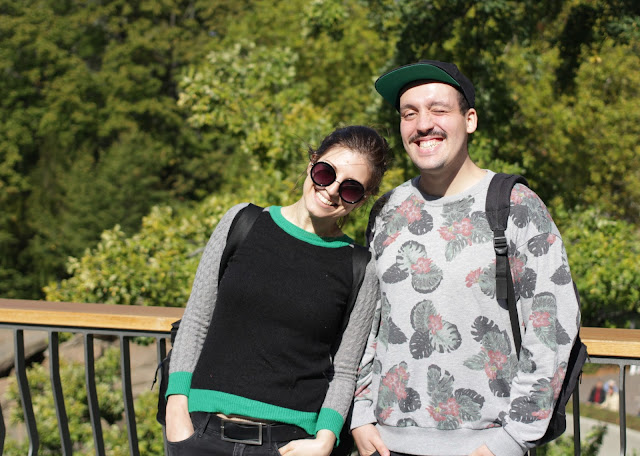 .. And then, we parted ways, to continue on with our Saturdays. 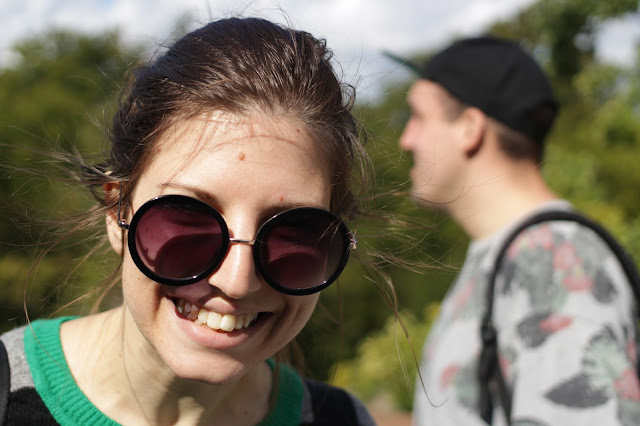 So here’s the part you mustn’t tell Szym.

Andy and I went back for more!

After a full day of walking and shopping, we passed by a food truck and felt enough space in our stomachs to taste some treats. 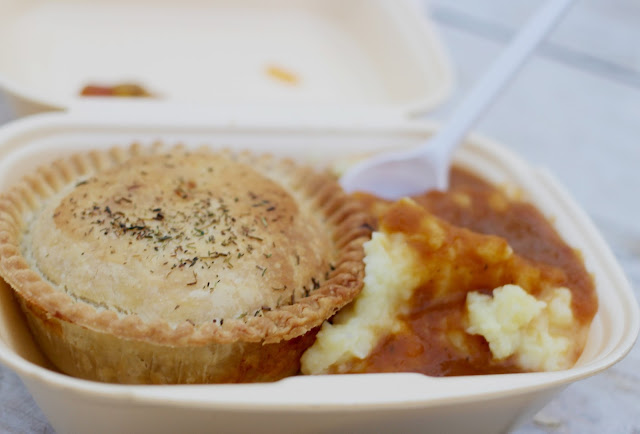 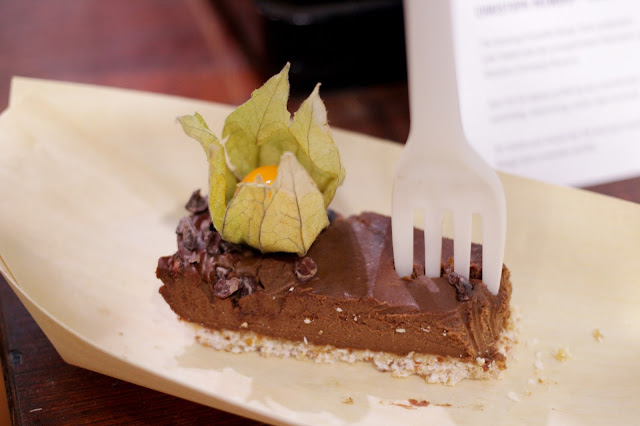 Not a bad way to fuel a weekend!