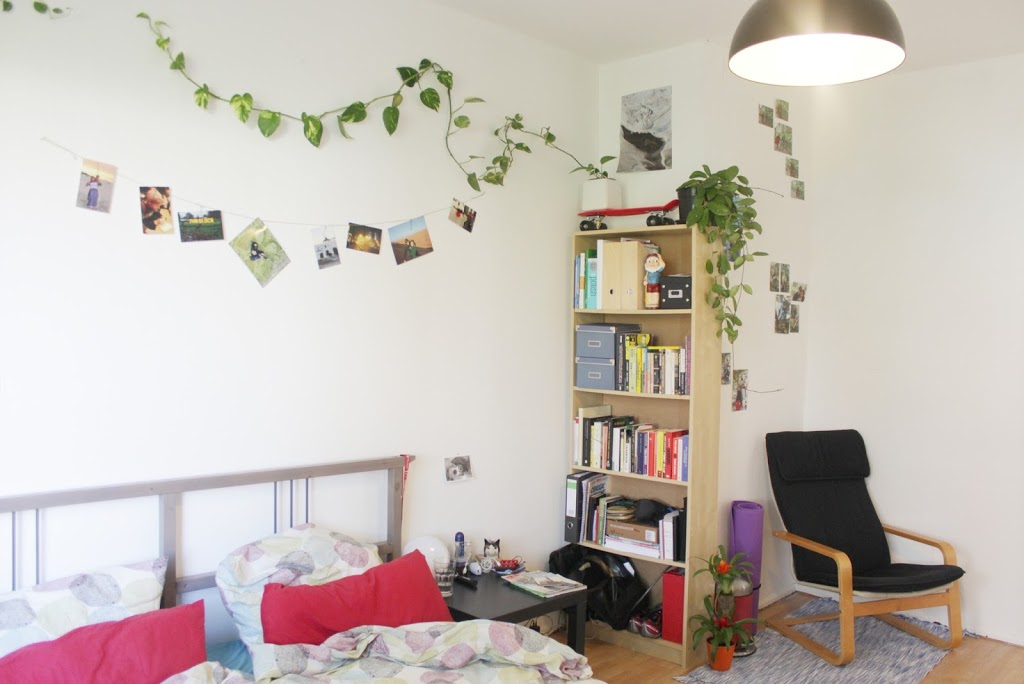 Up until now, you’ve only seen a couple of shots of the bedroom, back in the very early days of its life. 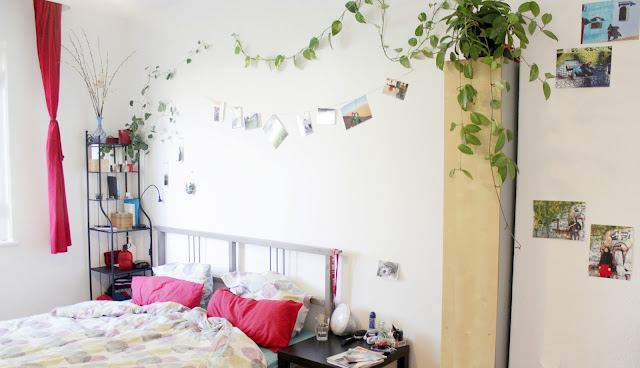 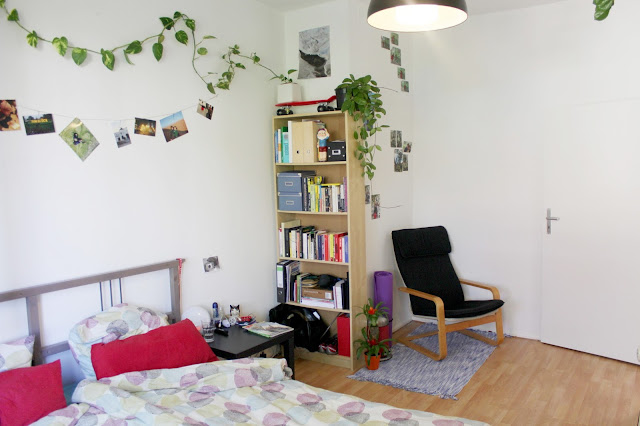 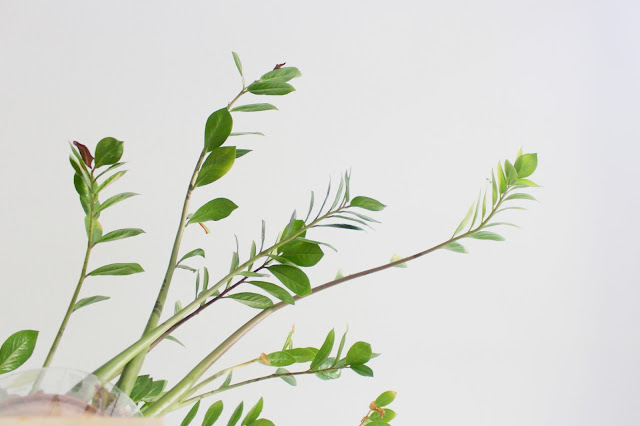 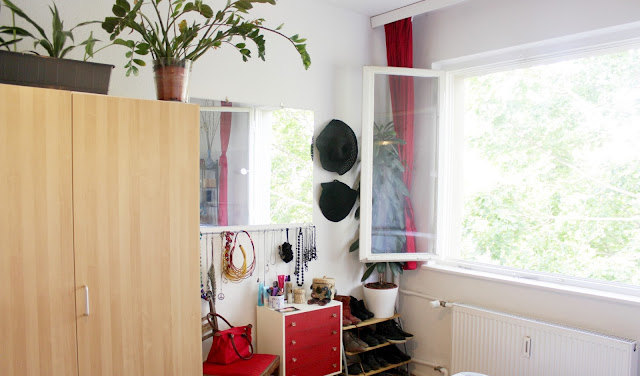 If we were staying forever, I would make a lot of changes. But as it is, I’m balancing costs with a presumably non-permanent stay.

At least I think I’ve got the level of plant occupancy up high enough now!

Shall we head on in? 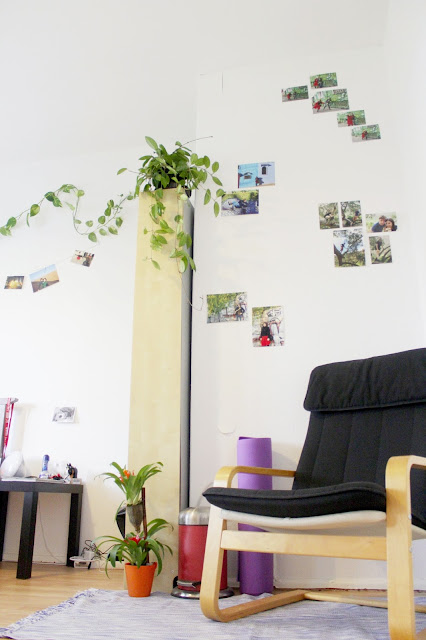 Our room has a fairly squarish shape, except for the ‘entry alcove’ which extends towards the door. We’ve occupied it with a Poang for now, but to be honest, with seating in the lounge room and the guest room already plenty for the two of us, we don’t use the area so much. 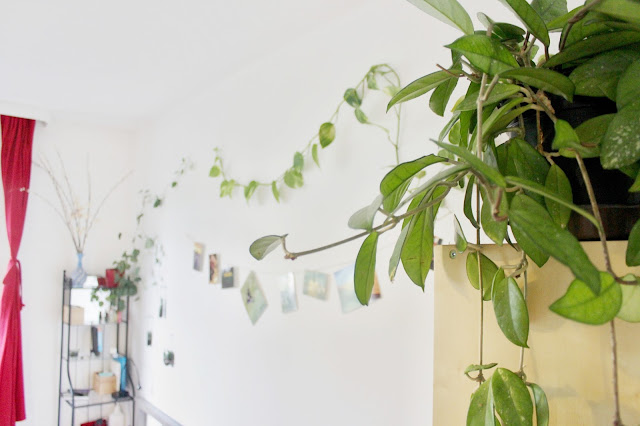 I got this plant from a colleague who left Germany, and I think it’s my current favourite in our flat. Mostly, because anything with drape-y bits is amazing, but also because it’s apparently impossible to kill. Win! 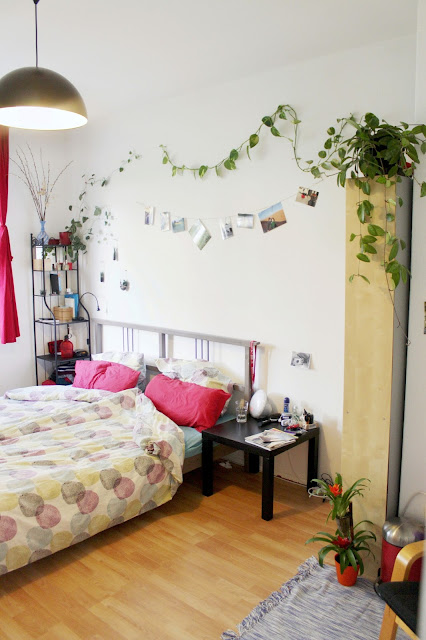 It’s perhaps hard to tell from the photos, because I deliberately didn’t take too many of the bed itself, but Andy and I have a massive bed, which takes up a fairly big portion of the room.

We’re both light sleepers, Andy has a tendency to steal the blankets, and I’ve had back problems in the past, so we technically have two single covers, under which two single beds are hiding- each with a different level of firmness.

Our friends have made fun of this ‘over-Germaness’, but, you know, when in Berlin….

The duvet covers where chosen by Andy. We went to Ikea and he picked out his three favourites, and then we discussed the various merits of each. This one has lots of little tiny ‘feather-like’ details on the circles. Which, apparently, is good.

In any case, the mattresses and bedding came from Potsdam, and might be ready for a change. For some reason that we can’t fathom, Germany has extremely soft mattresses, and almost all are pure foam (without springs!). When I bought mine, the lady at the store seemed reluctant to sell it too me, because she though it was too hard. Just two years later, despite continuous flipping, mine is already feeling too soft, and Andy’s, which is one or two grades less firm, has an Andy-shaped hole in the middle. 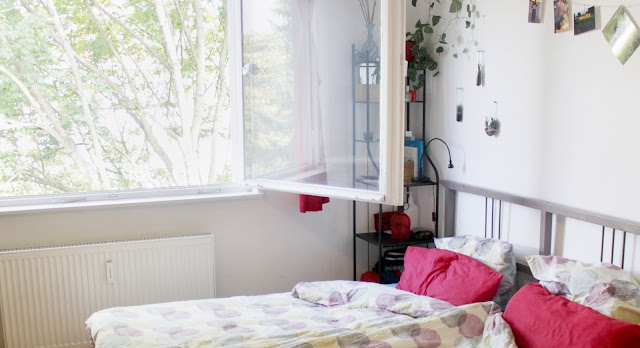 The dominant ‘feature’ of the room, apart from the bed, is a massive window. Outside, we have a giant oak tree, that casts the room in a soft green light (and makes it impossible to take balanced photos, especially when the sky is grey and shiny- sorry about that guys!)

Happily, in winter,  Our Oak will shed the leaves and we’ll have a clear view through to a brightly painted wall mural on the opposite apartment block and all the scraggly bits of winter light will be able to make their way into our bedroom. 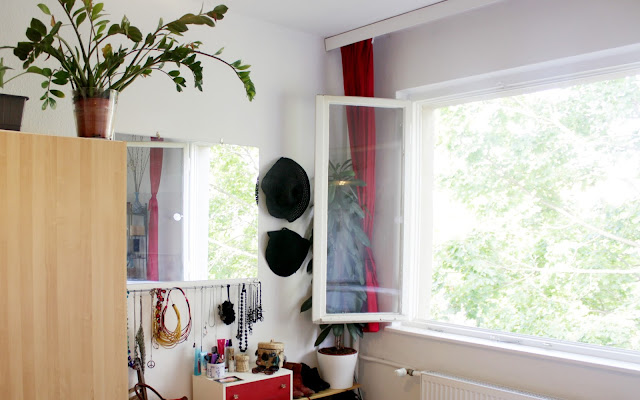 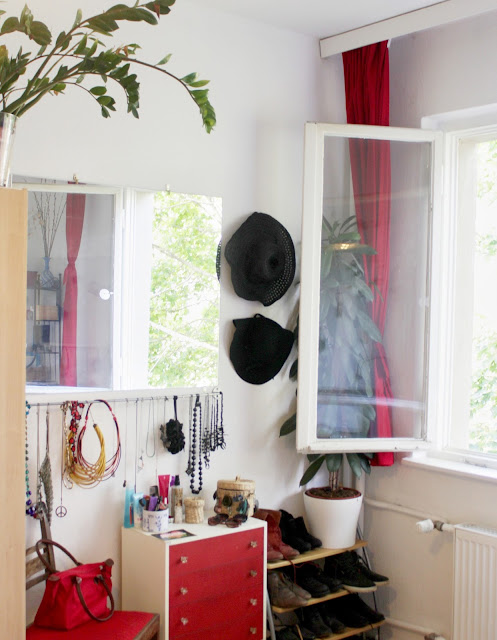 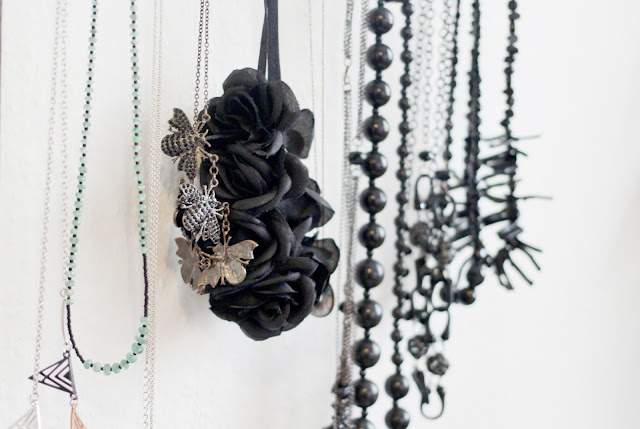 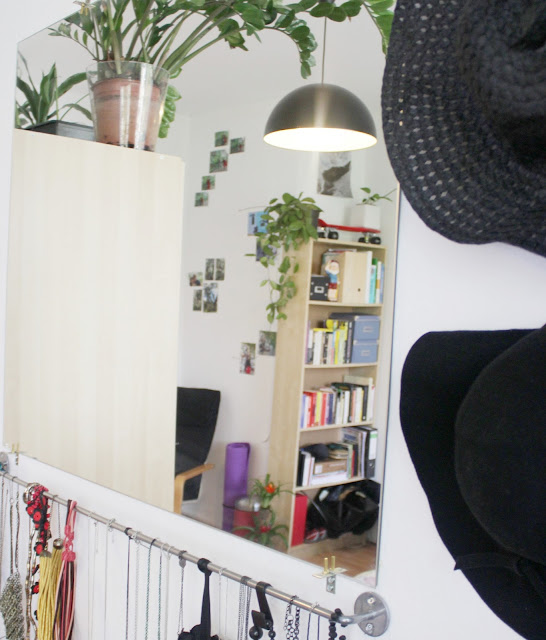 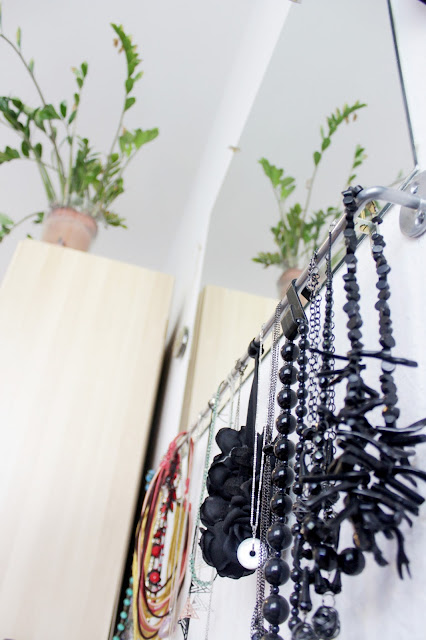 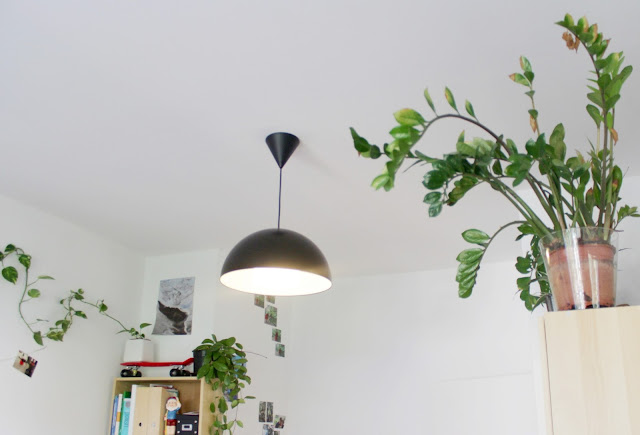 Did you notice the light shade!

After two-and-a-half years of the cheapest naked fluorescent tubes from Ikea in every room, I finally broke down and started buying up shades for the flat… and, after several kleinanzeigen (Gumtree) stops, I’m happy to announce that our lights are all now suitably covered.

The plant next to it is currently ‘favourite number two’. It’s just working so hard to make the cupboard it sits on look less ugly (or at least, to draw attention away from the cupboard). We got it from my mum when she visited, and, like all of our plants, it’s really taken off since we moved it out of our old humid apartment in Potsdam. 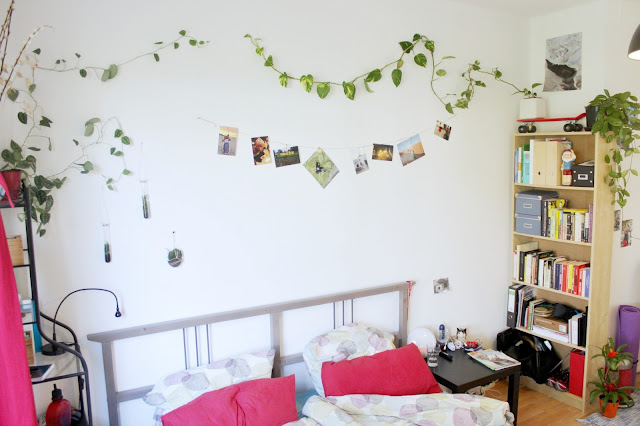 I love the trailing vines too!

The left one (Tegan vine), was another ‘survivor’ of Potsdam, that suddenly flourished in our airy apartment here in Berlin. The vine on Andy’s side of the bed is also from our recently-emigrated colleague. I like the corny vision that they are reaching across to each other. 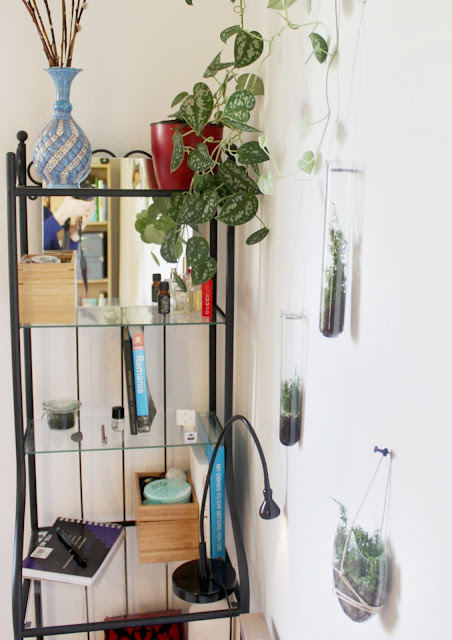 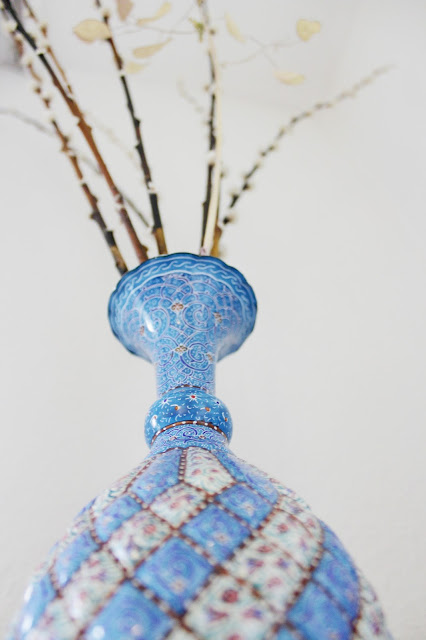 What do you think of this beautiful fellow?

The intricate detailing, with the blue and white contrast, reminds me a bit of Dutch Delftware, although here, instead of getting a bit too stuck on pheasants and flowers, the detailing is much finer, and highly geometric in an abstract way.

In fact, it’s Minakari, traditional Persian enamel art, and was gifted to me by an Iranian friend. Unsurprisingly, given the origin, it’s strongly reminiscent of some of my favourite patterning from some of the Mosques and palaces we’ve visited.

I’m not completely convinced that I’ve found the right position in the room for it yet. It currently holds dried flowers that reach up towards the ceiling, and I liked the use of space, but I feel like the vase itself belongs more at eye level. The only problem is I have a huge fear of knocking it over in the night!

My friend who gave me the vase sent me this short video– check it out if you’re keen to see the supreme skill in which the pieces are made. 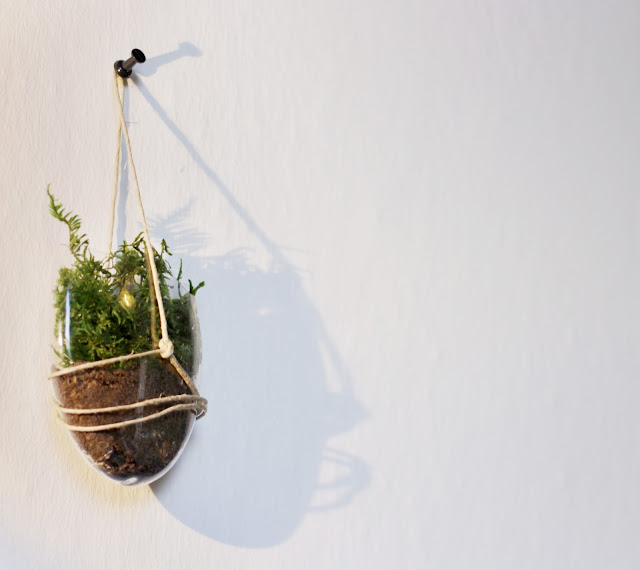 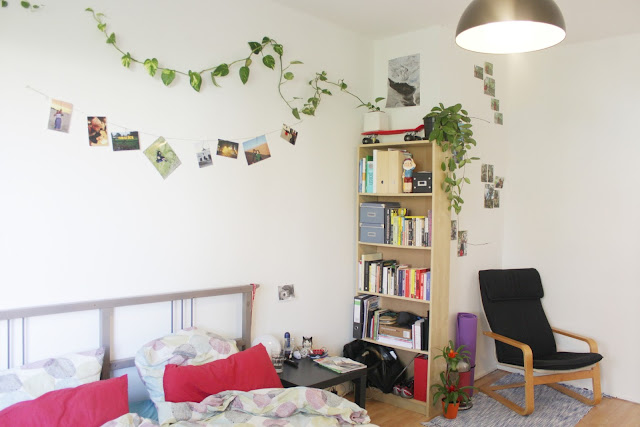 Andy’s side of the bed is all about the bookshelf. Plus this picture of a dog, which for some reason he fell in love with, (only to be super disappointed afterwards when he found out the glasses and hat were photoshopped on). 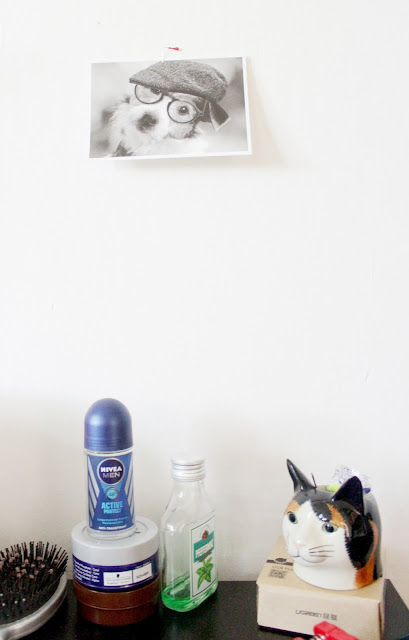 The cat, of course, is mine- a gift from Lauren. I feel like it’s presence here is required to balance out the dogginess. 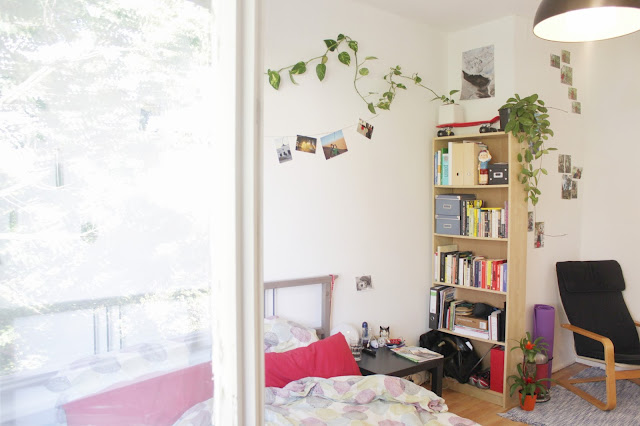 And of course, everything is kept in check by the plants! 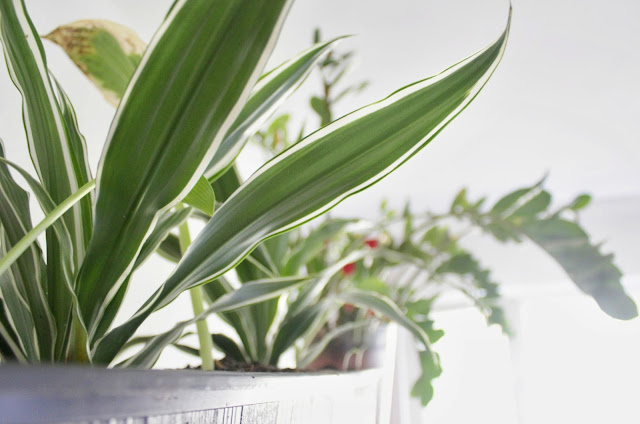