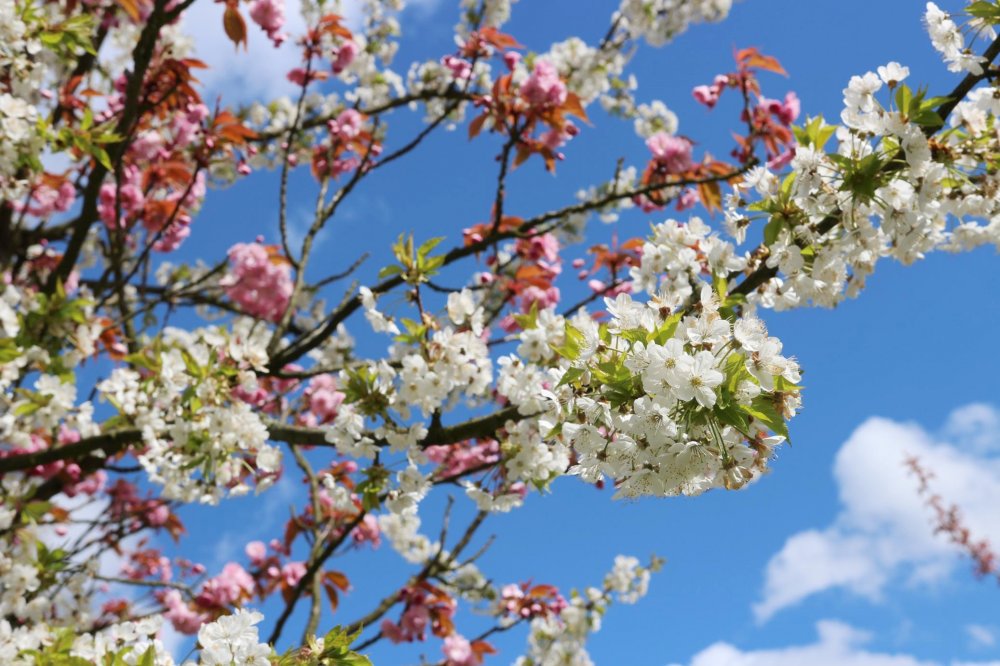 A couple of weekends ago, Andy, whose surname pretty much directly translates into English as ‘Cherryblossom’, marched us off to an event honouring the family flower. When we rocked up at the ‘Japanisches Kirschbluetenfest’ held just south of Berlin, we were faced with two options. In both directions the cherry blossoms are pretty much lining a long narrow tunnel, which turns out to the be Mauerweg, that is, the path of the Berlin Wall.

A couple of years after the wall came down, the Japanese government, and the Japanese people, donated thousands of cherry blossoms to line the land and give it a more colourful future. As can see from the photos, our arrival didn’t coincide with peak blossoming. The flowers are not at their most fluffy, and there are some leaves on the trees, which suggests that we were a bit late.

Still, Mr Cherryblossom was keen to pose with the blooms. I was apparently feeling less photogenic- this is pretty much the best I managed on the day: We wandered to the end of the path, where we found our favourite of all the trees, a pink-and-white hybrid. An almost-gruppen-foto. Missing two of our members, and taken when the clouds moved away and there were a full seconds of full sun.

Andy eating-and I’m not even kidding- a kangaroo sausage: We headed down the more terrifying looking side, which featured some more Japanese-y stores with food and wares. To be honest, not the best. We waited for about 30 mins for some Takoyaki (octopus dough-balls), because they are the best and my favourite of all the foods in the world.

But by the time we got our portions, the kiosk had run out of mayo, and didn’t have any bonito flakes, which was heartbreaking for me, and didn’t really give the best First Takoyaki Experience for our friends.

Which makes my conclusion this.

And the Teltow/Lichterfelde Mauerweg is a nice place to see them- accessible by train, but I guess far enough from the city to not be overrun. To date, I’ve always been a bit disappointed by any attempts at expressing Asian culture in Berlin. But the event itself was nice- and we ate good cake. So go to Lichterfelde for the Kirschbluetenfest if you want to be in the sun, see some people and eat some German food.

Or go outside of the fest dates, if you’d rather simply stroll down a boulevard of flowering trees.