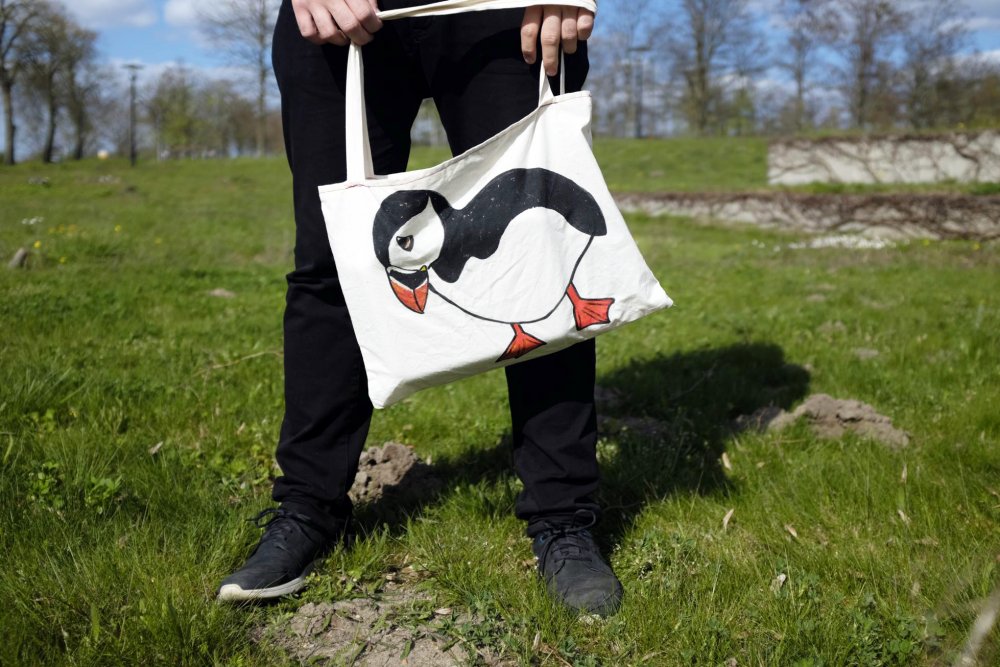 Which a child tells you that their new and greatest love in the world is a tiger, skateboarding, drawing mustaches on oranges, or Disney’s ice queen, you can choose to believe that, probably, eventually, they will grow past this phase.

When a grown man travels to Mull, falls in love with puffins, starts religiously watching a puffin-related show aimed at children, and spends (presumably) hours in front of the mirror perfecting his ‘concerned puffin’ look… well, there’s not much you can do except sit back, watch, and occasionally feed the flames of his peculiar passion.

He’s a bit shy of the camera. Joram’s puffin tote came from the fact that it was his birthday, the fact that he decided to combine the birthday with a kind of ‘housewarming’ (lazy, right?), and the fact that I therefore bought lots of plants and therefore needed something to tote them to his house with.

I think it came out ok, given that it was my first time tote-making and my first time Puffin-drawing. I was in a bit too much of a rush for my liking, so I’m a bit disappointed that I couldn’t remove all the background pencil lines that I first sketched onto the canvas, and a fairly unamused at my lack of skill with sewing on the handles neatly.

Red thread seemed like a nice ‘feature’ idea, until it dawned on me that I can’t sew straight.

Anyway, at least it gave me the excuse to get photographic evidence of Joram pulling his ‘concerned puffin’ face. Because he is a very, very good sport. One for the album? (Said in Wallace and Gromit voice).