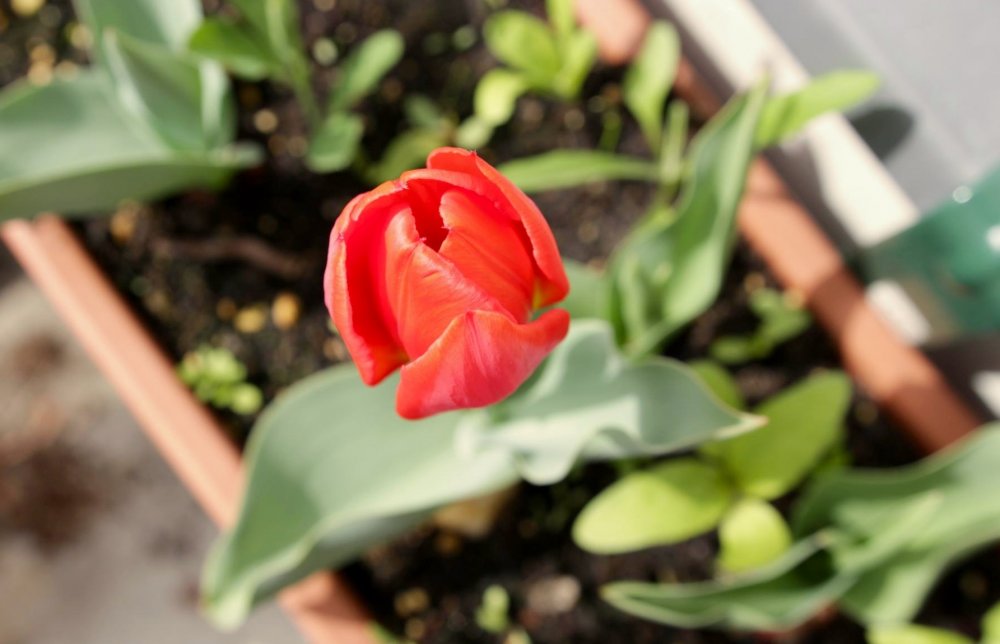 If you follow me on insta, you know that I almost all of my photos that aren’t of Andy drinking spearmint milkshake like a tiny hummingbird, or of me accosting whichever cat stumbles into my vicinity, are of plants.

So here it is guys! The obligatory ‘spring is coming to my country, my heart, and my balcony’ post of 2016.

This year, spring on my balcony began some weeks after a long weekend visiting Ikumi and buying bulbs in Amsterdam and some fewer weeks after an easter weekend of turning balcony soil and planting.

I’m calling the official beginning as yesterday evening, when I went to get some mint, and instead get an eyeful of this: I’m trying to buy less cut flowers right now, in line with my New Year’s resolution of not buying so many easy-come-easy-go things. It’s not a hard and fast rule. But because I know that when the leaves fall back off again and the sky lowers and the world becomes grey I’ll be queuing outside the flowershop with all the rest of Germany, I figured that during the spring and summer I can focus more on plants, and growing things from seeds.

Or in this case, bulbs. I bought a huge pack of tulip bulbs, as well as some other mysteries, and planted some inside, and some outside. So far, despite the warmth, the lack of sun has played havoc on the more domesticated of the bunch, and they’re mostly pale, kind of weak, or simply dead. Note to self: next time, put all bulbs outside or directly near a window. But at least the huge pack meant that I’m playing the numbers, and a good amount of the balcony bunch have sprouted.. still no word on the mystery bulbs though. You might notice that the tulips have friends. When I turned the soil, I threw in a whole lot of seeds leftover from last year, as well as a great number of some secret seeds from Iran. So soon we’ll have sunflowers and pretty coloured filler flowers. Nonetheless, the amount of seedlings I now have appears to vastly outnumber the amount I planted, so I suspect that we’ll soon get a nice idea of which of last year’s crop dominated at passing on its genetic material. After waiting months and months last year for my mint to reemerge post-winter, and my parsley to grow from seed, I decided this year to just throw in the towel early and buy some new plants. I’ll try to bring them inside at the start of winter, but given that a lot of these fellows seem completely intent on remaining annual and setting seed, it might only be the rosemary that makes it through. Bring on the colours of spring!