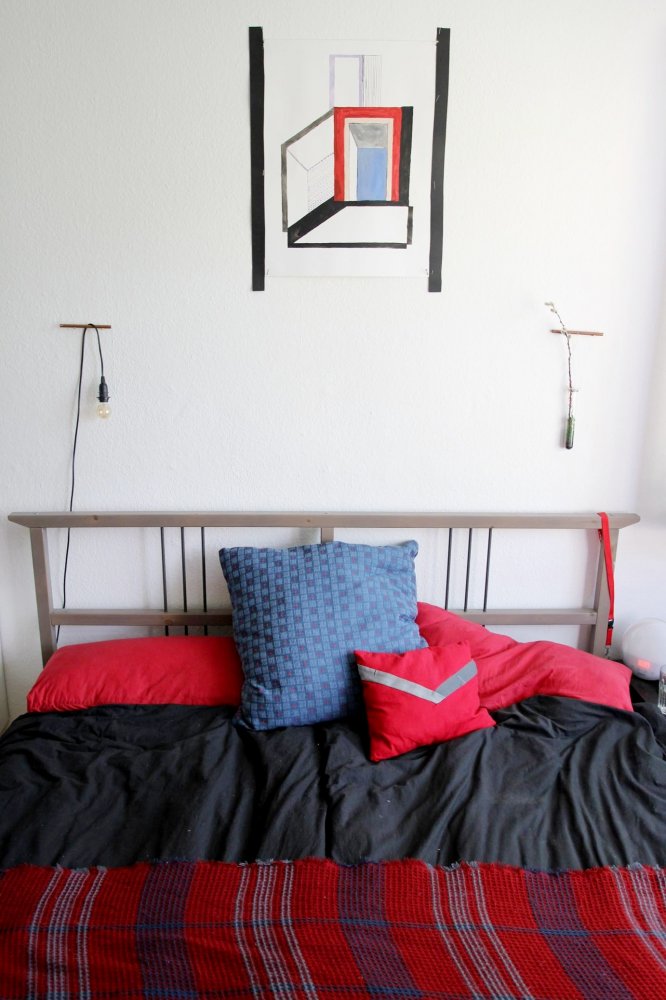 Hola guys, I thought I’d post a quick update of some sewing adventures, that I promised my sister about a month ago, and tack it in with a story about the Warsaw Uprising.

You know how I mentioned that when we were in Amsterdam I ended up buying and embarrassingly large (but shockingly cheap) amount of really rather fine material?

Well some of that is still sitting in the Bob Dylan Zimmer (which now looks more like the ‘my sewing school exploded in here’ Zimmer), but some of it has made it’s way into cushions. I rather love this cotton, and it’s stripey sister that I’ve yet to attack. Together, they look kind of Japanese-y to me. The little red pompom-ettes (it was pointed out to me that they’re not really fluffy enough to be real pompoms) are because everything in our house has to somehow incorporate red, because it’s pretty much the only design choice that Andy and I really agree on.

Anyway, it’s sitting on a chair that in turn sits in this little awkward ‘entrance’ that our bedroom has. About a metre wide, right at the door, too small to fill with much. Currently the area is filled with photos, but I’m not really happy with how chaotic the whole thing looks. I AM supremely happy with that Warsaw poster though.

When we were in Warsaw with Andy’s parents, we stumbled past it at a kind of makeshift memorial. I’m fascinated by the world of propaganda. That Russian room in the Tate Modern just bursting with posters form the cold war? Captivating! This American Life‘s recent episode, ‘The Poetry of Propaganda’, discussing the use of advertising in luring home Guerrilla fighters? Amazing.

But this has got to be one of the most perfect and beautiful uses of symbol and design that I’ve ever laid my eyes on.

Stuck in between Germany and Russia, Poland never really had a chance in WWII. But on 1st August, 1944, the Poles initiated The Uprising – the largest single military effort taken by any European resistance movement during the war –  in an attempt to reclaim their land from the Nazi occupiers. It was timed to coincide with Soviet marches on the east, but the Russians stopped short, refused help, and even hindered support from abroad. The resistance was ultimately crushed, and by the end of the year perhaps 85% percent of the city was damaged (mostly deliberately, as punishment), and up to hundreds of thousands of Poles were killed (most as mass executions, of civilians).

Parenthetically, if you ever go to Warsaw, you should definitely visit the Warsaw Uprising Museum. It’s beautiful, and traumatic. One video, showing people effortlessly lift the barely-human remains of starved children, will definitely stay in my mind until I die.

We saw the poster on a small memorial in the streets, coupled with photos and letters and information about the Uprising. The huge black paw of a massive beast, crushing down on the tiny black bird, who nonetheless rises up, beak poised ready to strike: we were both pretty much in love.

We spent the next few days in Warsaw stopping by every poster seller and tourist shop, trying to buy a re-creation… No luck. Looked online…Nothing at all.

So for Andy’s Christmas present, I bought some card, some black paint, and snuck into work to use the projector.

Aaand, a quick word here. I debated even putting the Warsaw thing in this post because of the copying of the poster (I also feel some guilt about the picture above the bed- which is heavily based on something I saw in a shop in Amsterdam, which I then painted at home in ‘our colours’). In the end, it’s something that we have in our apartment, that we love, and want to look at every day… so forgive my blatant forging.

Anyway, back to sewing… You might have noticed the blue ‘rug’ under the corner chair.

That’s also some fabric from Amsterdam (something woven and kind of robust-feeling), which I sewed a spongy non-slip base on, to make it ruglike. I guess it’s not a long-term solution, but over the last couple of months it seems to have survived any visible wear.

Basically, we chose to make our bedroom blue and red, which is a really stupid idea because it’s not really a colour combination that exists. But I found this drapey scarf/throw and fell in love, and I’m clearly in some sort of nesting mental state, so I just went with it.

Anyway, at least when I was in Amsterdam I found some other pale-blue-and-red material, and immediately grabbed a whole bunch of it to make a rug and Andy’s new favourite ‘reading cushion’. I also may have bought a silk kimono in Amsterdam. Because I’ve been watching Breaking Bad, because I have loved kimonos forever, because I am currently a complete bower bird for anything silk (bonus points, it’s blue!), and because it is very, very pretty. That’s all folks… back to the sewing room!