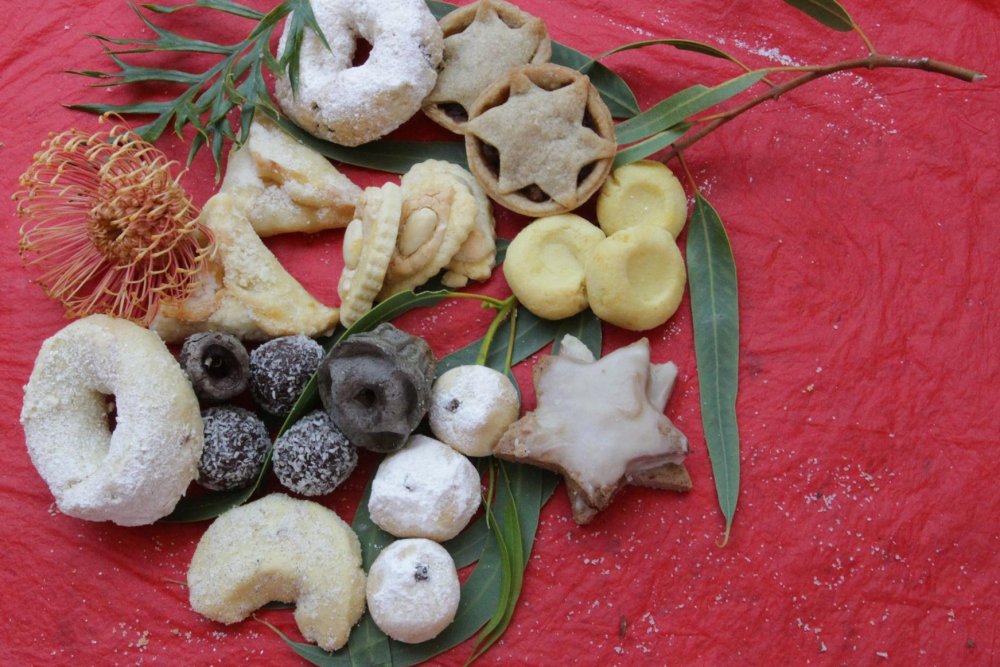 For all the obvious reasons, I haven’t felt much like talking about Christmas Cookies in the last few days.

But here we are now, on Christmas eve itself, and it seems like Christmas will happen whether we are ready or not, so here goes. This year, given that I was back in the Home Country, my sister took a day off work, and we made all of our favourite ‘old country’ cookies, as well as a few newer, more German-y ones.

I’ve told you already about our beloved Kahk, the passed-through-the-generations family favourite, which consists of a short-crust dough wrapped around a date filling.

This year’s pastry was a bit more of a struggle than last year, possibly due to the hot weather, possibly because I forgot to buy a plane ticket for my thermomix to help me with the baking.

Ariel didn’t really want to do them to begin with, because they’re such a pain, and they tend to cause family friction. So maybe the Kahk just knew that her heart wasn’t in it.

Nonetheless, they ended up coming out ok, although Ariel (inheriting the ‘spirited complaining’ birthright from my Grandfather) thinks that the dates in the centre need a bit more butter. So, next time eh? Here’s the ‘grand fromage’ of the cookies this year. Let’s start at the Kahk, which you should recognise, and go clockwise…. So. I’m going to be honest. I’ve made gingerbread and various spiced-cookie variations many times before, and I think that most of them have come out better than these fellows.

Mostly, because we traditionally ignore the spice instructions, and typically put waaaaaaayy more than the recipe suggests (you know, because the spice is life!). This in itself would have probably been ok, except for the fact that I misread the German Teeloeffel (teaspoon) as Essloeffel (dessert spoon), so already had about 2-3 times as much.

The little almond leaves (below), were also a pain, because our almond meal was not entirely smooth, and kept clogging up the icing nozzle.

Just pretend when you eat them that the almond on top is all structured and undulate-y, instead of kinda blobby and uneven eh? Thankfully, the Vanilla cookies came good, and the little ‘German’ orange shortbreads leapt into the oven without too much protestation. Along with the German shortbreads, we also did our family shortbread, the Ghorraeba. Which might mean that we have a bit of a shortbread surplus this year. What is it about this stuff that associates it with Christmas eh? And of course, our cousins’ favourite, Cornetti, filled with apricot jam.

We’ve previously tried to fill them with good quality jam, but this year Ariel and I went full-Grandad (‘budget friendly’) and bought the cheapest and nastiest jam we could find.

I think it helped: the high sugar content really encourages the boiling jam to caramelise, and keeps it inside the little triangle structures. On with the group shots. Complete with Australian Flora, just in case I didn’t mention enough times that this is Australia! I thought I’d end up with a ‘SUCCESS’ shot of me with my beloveds…. Wishing you all an extremely sweet Christmas guys, or, if not that way inclined, a Happy Holidays, Merry Break-time, or ‘extremely-productive-in-the-lab-because-everyone-is-pretending-to-be-Christian-and-slacking’ time!

Much love to all.