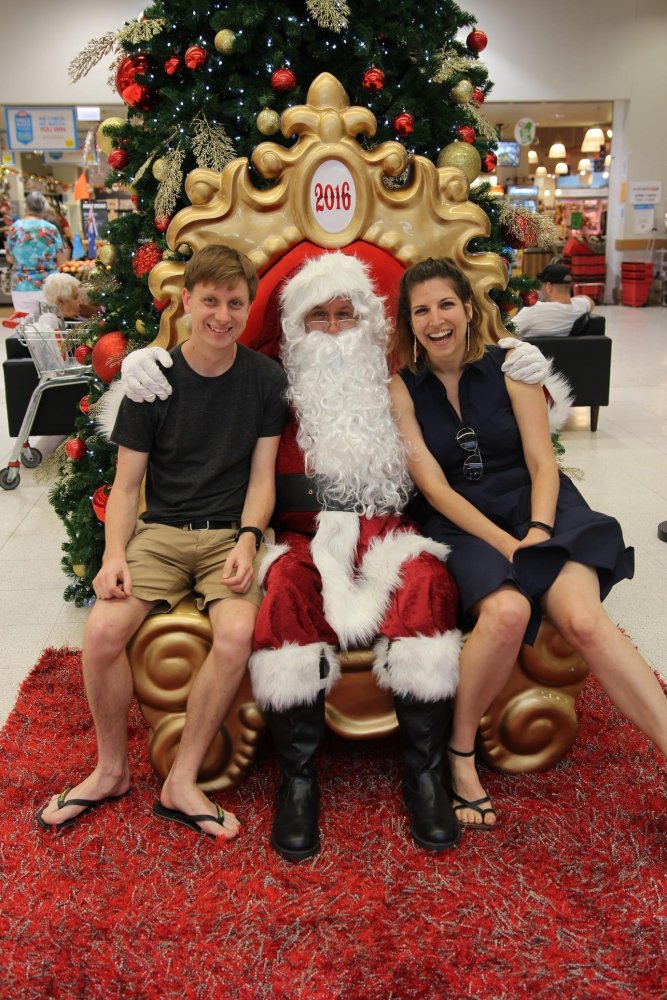 I think most of us can agree that 2016 has been a pretty stressful and terrifying year for the world at large. So, I hope you won’t mind excusing me briefly as, apart from a general wish that next year runs a lot more peacefully and inclusively in 2017, I take a break from the world and give a run-down of the last 365-or-so days in the Armaniewski household. Last year ended in a regal manner, when work sent me down to the Munich-adjacent Max Planck Castle, as part of our lab group’s retreat. By the time I got back up to Berlin, the Christmas season had begun, and the apartment was momentarily filled with Wiszniewskis, who rushed around Christmas markets before we all headed off on a Holiday-Season trip to Greece.

Andy’s parents, as well as Brother 1 and Brother 2 joined us as we checked out agoras and temples, failed to see the delphi oracle, and ate more meat (lamb!!) than our little bodies could safely handle.  Meanwhile, Andy’s sister and her boyfriend sent us love in the form of our new favourite Christmas cactus. We arrived home (Andy and his younger brother Mike detoured via Poland), and settled back into the rhythm of work and the changing seasons… Of course, we took some time out to play in Winter’s snow, to see spring’s cherry blossoms, pose in the summer canola fields and drink fruity wine at the baumbluetenfest (tree-flower celebration), and to frolic in the leaves of autumn. As usual, our favourite times of the year were when we had visitors- Kim, David, Gem, Dicky, Ikumi, Lauren and Simon, Ellen, Ashlee and Boton, thanks a million for making the trek out!

As I may have mentioned to everyone I’ve managed to catch up with in Australia in the last couple of weeks- we have a proper spare bedroom complete with double mattress couch, and can sleep 5 (7 with Andy and I) in the flat, so if anyone fancies a short (or longer) visit, please do come. This year’s summer was a bit of a whirlwind. I traveled up to Amsterdam to catch up with Ikumi, our schoolfriend Lauren and her fiance Simon, then hopped on a plane straight to Stockholm, so that Andy, with our Dresdenite friend Sara and I, could head up to Umea. There we joined up with several members of the original ‘PEB Gang’ from back when Andy and I worked in PEB, including Dicky (now in Cologne), Ellen (Perth) and Simon (now in Umea), as well as Lucy (Simon’s Wife), Jules and Markus. Here’s a rare Guest-Andy take on the experience:

Good friends, good food, good relaxation. There was no electricity or internet but the summer sun never set so we were never wanting for light and we could cook all our food on a fire

We could swim in the lake or have a paddle around in the boats. Or just relax in the sauna after jumping in the lake

Thanks very much to Simon and Lucy for organising the trip and our friends for joining to make a great holiday. From Lapland (parts one, two, three) we traveled down to Riga via Stockholm and enjoyed the local delights with Ellen and Dicky for a couple of days. Then I went back to thesis writing, and Andy continued the holiday:

Unfortunately Tegan didn’t have as much time to spare at that time of the year but Ellen and I went down to Sara’s place in Dresden. We had a really great time at the fringe festival there. We saw music, a Frenchman recreating the Moulin Rouge with a puppet show of cows and chickens and a contortionist moving his body around into strange and wonderful forms. And they had a bar on a spinning carousel which I’m sure would be against all kinds of Australian health and safety regulations but the Germans manage to be a bit more fun about these kinds of things occasionally.

The weekend after all of that we went off to Paris to see my mother and her friend Irene…. I’m a bit embarrassed to say that I didn’t get ’round to blogging Latvia or France yet, maybe we can do a throwback Thursday sometime in the new year.

Life continued in happy chaos and one of my other BFFs, Ashlee, visited Berlin with her hubby Boton (a.k.a Andy’s new BFF), and Ikumi dropped by from Amsterdam. My new year’s resolutions last year involved ‘Making, thinking, joining and giving’, which more specifically involved getting off my bottom more, doing more creative and crafty projects, and eating/living in a more sustainable way. Generally, this was fairly successful until the last few months of the year when, buckling under write-up pressure, I resorted back to large amounts of takeout coffee, fried chicken wings and doner kebabs. New year’s resolution 2017- get back into the habit of doing.

Nonetheless, in 2016 we did manage to keep building on our little Berlin nest, adding in loads of cushions and a couple of posters, a huge green and gold painting andcollapsible side tables for the balcony. I also got a bit more into sewing, especially after bringing back metres and metres of material from Amsterdam (orangey silk top, green silk top, a dress-like-hybrid-thing), and made a couple of gifts for friends (coccolithophore, puffin).

To be honest, by the end of my Phd I felt generally pretty frustrated, and found that trying to do something a bit creative (especially the kind of thing where you get a fairly immediate visual product) was a good way to deal with the combined stress and boredom of writing up. While I was busy crafting, Andy’s resolution seemed to mostly revolve around making the most of his 2-hour-per-day commute by consuming as many books as he could. In addition to an 800 page history of the French Revolution, he got really into (and some would say, obnoxious about) Infinite Jest:

I finished reading Infinite Jest so I’m pretty happy with that, long but worthwhile. It’s such a detailed world to be immersed in strange but recognisable with great humour. Definitely a grotesque aspect to some of the scenes and characters but they stay with you a long time after. Obviously on the blog I tend to focus on the trips and the fun stuff we do, mostly because ‘and then we went to work and our experiments failed again’ isn’t really very interesting or amusing. But I should probably mention here that I’ve submitted my Phd thesis (4th of October), and am now just waiting for the marking, and the terrifying defense. Meanwhile, I signed a new, two year contract, which began on the 15th of October. Andy is continuing on in his current lab too, with money until the end of 2017, so we’re still in Berlin for at least another year or two.

Anyway, after submission, everything felt a bit ‘downhill’. I signed the contract, celebrated, immediately got sick (I think the adrenaline of write-up kept it at bay), celebrated my birthday in amazing style (see www.teganwins.com), and very rudely flew out to Australia the day before Andy’s birthday. Which is where I am now, getting ready to leave back to Berlin again on this evening’s flight.

It’s the first time we’ve been back ‘home’ in four years, and it feels like an apt way to end off the slog of the Phd, but also a little bit surreal. A kind of stepping sideways, home-not-home, situation.

Here’s a quick word from Andy on the topic: It’s very warm, and I like the food, and the people… especially the big flat chicken

But more on that later I guess.

Anyway, thanks again to everyone who helped make 2016 lovely, with a special shout-out to Andy, who put up with me during the write-up.