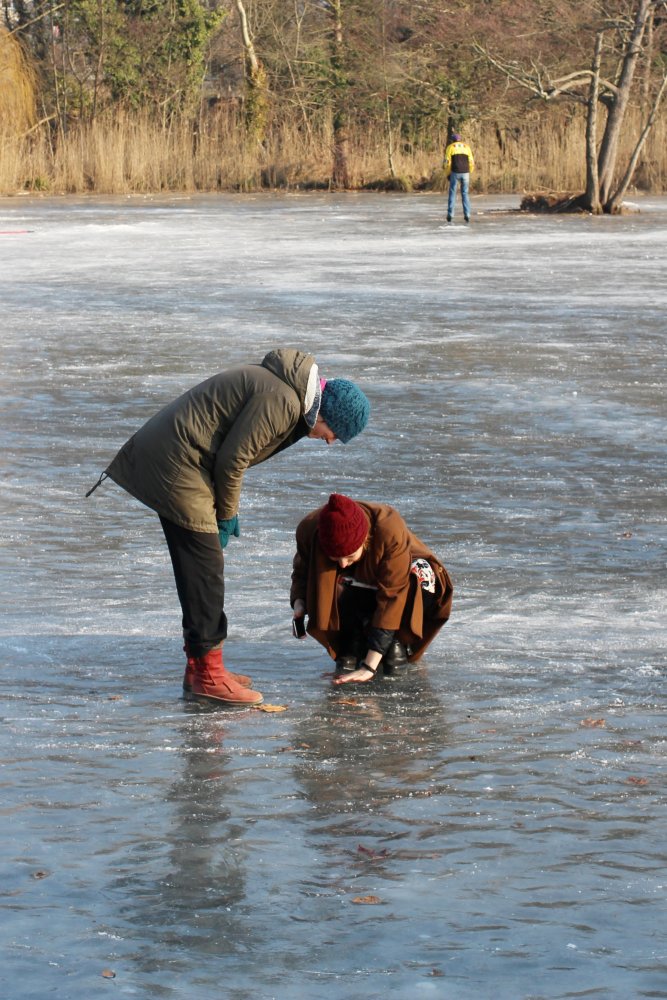 I feel like I’m at the stage in my life where I can’t say or think of the word ice, without getting Vanilla ‘Ice-Ice Baby’ stuck in my head all day.

This is a problem, because icecream in German is also ‘Eis’.

And man, do I think about Eis a lot.

Anyway, I’ve realized that I’ve hardly posted any photos of Winter this year.

But the truth is, this winter has been exceptionally mild (at least since we got back from Australia). And mild generally translates as grey skies, grey trees, grey streets, and ugly photographs. There was a week of extreme cold at the start of February, and then, perfectly timed for a weekend stroll, a day of sun and light and warm air.

And Lo! Stroll we did.

And as soon as we saw that strolling on the ice was also an option, that we did too! Meanwhile, the men waited on the shore with the stroller. If you’re wondering what we were looking at, it was this little sputnik. The Ice men (does not sound as cool as Ice Ladies right?), when we finally let them on the ice, also found the little seed-thingy quite fascinating. I’ve talked about this quite a bit, but one of my favourite things about Germany, and one of the things I think is missing a bit in Australia, is the way that people come out of their homes, as a community, to celebrate the seasons.

As a kid, I always firmly believed in the idea that you have to have a backyard if you want to have happy and healthy kids. I never even questioned this idea, until my Cons-biology friend Clare raised the issue.

But, despite a happy childhood spent mostly in our backyard, the truth is… and this is even if I completely ignore the social and economic costs of urban sprawl…. I have to admit that when you always play in a private garden, you sometimes miss out on community feels.

Syure, Berlin particular has a reputation for being an extremely unfriendly place. But there’s just something so very, very delightful about going outside to experience this lovely world, and passing by groups of your neighbours doing the very same thing (even if they do ignore you). To bask in the first sun of spring, to grill on warm and bright summer nights (or just sit in the park with a beer*), to stroll in golden autumn light and to dance and skate and frolic across the ice and snow while others are out there doing the same. It just feels cozy.

*I wrote this first as bear. Which would also be cool. Plus, all that strollin’ and lookin’…. it’s pretty good for your health!

On that lovely winter day we walked around Park Sanssouci for an hour or more before heading back to our friends’ apartment to have some tea.