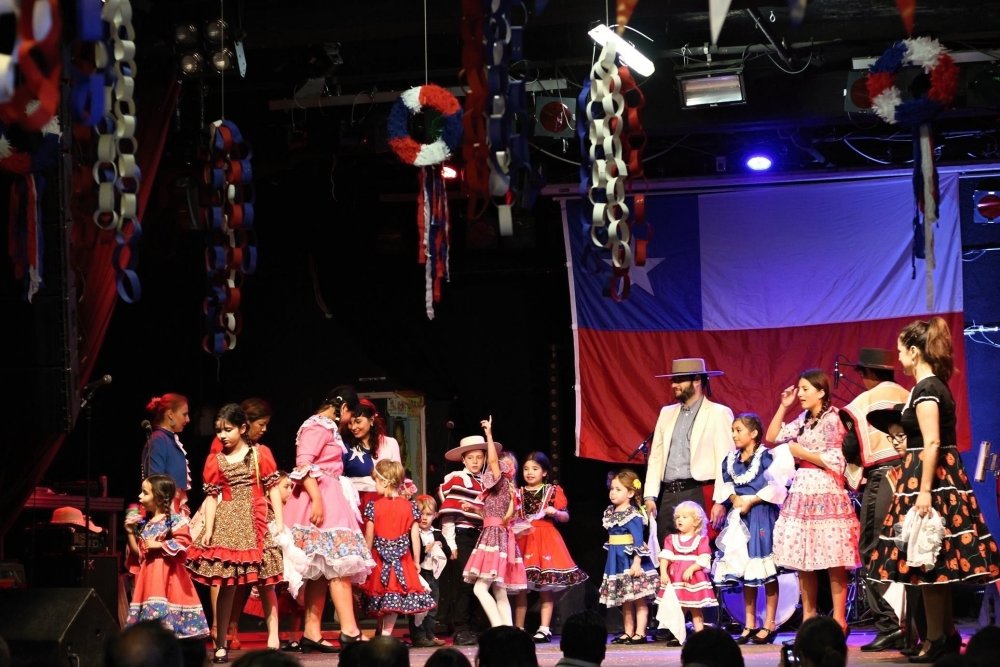 I meant to do a short post about the Chilean Cultural Day shortly after we visited.

Turns out that was three weeks ago. When we first came to Germany, Pau, my beloved Chilean friend, was one of the first to embrace us. Not only with literal embraces -Pau has spent a good 4+ years now trying to teach me how to hug like a real person, and not like an uptight repressed Australian- but with true integration into the little expat group.

You’ve seen her before on the blog. She’s the gorgeous one: Pau has always tried to share her Chilean culture with us- especially the food! But there have been a few false starts. The Chilenisches Volksfest comes around ever year, but Andy and I were away for one, Pau was away for another… and when we went two years ago, a storm killed the power and we were left waiting in line for lukewarm empanadas for over an hour.

This time we hit the ground running … and ate all of the empanadas our little hearts could desire. The Gang: Me with Fabio, Matthijs, Pau and Enrique. Plus, later, an Iman! When we first entered the venue, we took some time to watch the dancers. It was pretty much a bunch of adorable children wearing adorable costumes leaping around a highly patriotic stage.

If you can imagine the von Trapp family from Sound of Music, and then make it about 1000 times more Chilean, you’re there. Despite the cuteness, we had to admit that we were truly there for some food. So we hit the stalls. Empnadas! with a kind of fresh tomato salsa. Kind of ugly to look at. Kind of perfect to eat.

I am constantly amazed that Germany has not yet managed to invent the ‘pie’ or em-pie-nada by now. And you call yourselves civilized! Start with a meat pie kind of base (mince with onion).

And then maybe some raisins.

Top it with creamy corn coated in sugar and bake it in the oven until caramelized.

I generally hold the opinion that mixing sweet with meat is an abomination (there is a special circle of hell reserved for the creator of ‘apricot chicken’). So this dish, which I honestly believe was invented when a gust of wind caught the cooking book and ‘meat pie’ became ‘creme brulee’, is not really my favourite.

But it has been explained to me that I might just be objectively wrong in this opinion. More to my taste?

Mote con Huesillos. A kind of dessert-drink hybrid with dehydrated peaches which are then cooked in a cinnamon-sugar syrup with wheat kernels. There were also a variety of meat-featuring dishes, including various bun-related products, and a couple belonging to the ‘meat on sticks’ family.

And of course, it wouldn’t be a Chilean festival without….

Featured here in Pisco Sour form which was truly delicious. They were also selling Piscola, which is, you guessed it, pisco with cola. The pronunciation is a bit weird in English (think Piss…. cola), so I spent the afternoon calling it pisco-LA!

In the end, pisco-LA is ok, but it’s not match to Pisco Sour. ^Matt and I are suitably impressed. Enrique is proud of his culture.

Guys. How is icecream wine not a thing in Australia yet?

I can’t see how you could possibly go wrong with a cartoon of fruity lexia topped off with a few scoops of Peters. University students of AU- take note! (Note, Enrique’s nose does not usually look like this. My camera did something funny). Next up was dessert. All of them including dulche de leche (think caramalised codensed milk). Most including meringue. When we had eaten our fill, and as the sun was beginning to disappear, we headed back into the hall to watch some more of the provided entertainment.

This time around, a magician! And then we spent the evening… probably one of the last great ones of this Summer… hanging around outside and chatting about life, with the two Chileans occasionally singing along to the snippets of songs wafting out of the hall.