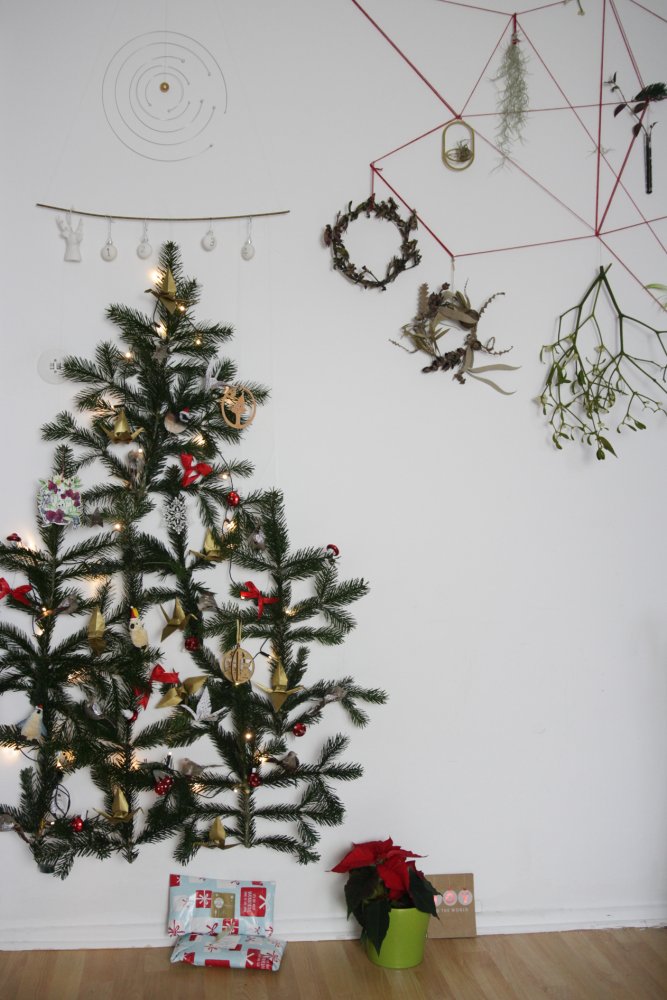 Well, the incredibly perceptive and intelligent amongst you may have noticed that this year’s Christmas tree is not really a tree, but more of a bunch of branches.

Or  maybe, ‘The Christmas Tree Collective’. We tried buying a tree last weekend, but the tree market near us had most of the trees pre-wrapped – which – well seriously, how am I supposed to find the One True Tree that calls to my heart when they are all hidden in plastic netting?

Plus, the man there was a little creepy, and it was cold. So we went home empty handed.

And then, after another exhausting week had passed, and it became clear that Andy’s had no investment in this tree thing anyway, and we decided kind of last-minute to head to Spain for Christmas anyway, and the living room was still a mess of sewing and drawing and embroidering things… I realised that my energy for tree-hauling had pretty much melted away.

But I did still have an itching for a kind of two-dimensional wall hanging. Actually, hanging things on the walls is pretty much one of my all time favourite things: ^seconds later, the ‘Joy’ Christmas card from Andy’s parents plummeted to the ground (for the fourth time that day. Which is why Andy does not like things hanging from the walls.

Look Andy! I also put a thing on the floor!: Theme wise, we’re pretty much stuck on Birds and Mushrooms. Not so much as a deliberate choice- partially just because I seem to have a lot of Aussie Christmas Birds.

Not featured here is the newest member of this collection: a rainbow lorikeet.  He’s not featured because he isn’t wearing a festive hat like the pretty little fellows below. So I’m not sure if he’s allowed on the tree. Apart from the jolly-ol’-tree-decorating, I also spent the weekend making Chrissy cards, and filling our pantry with various Christmas-related sweets. I even managed to make my mothers best-ever-fruit-pie, despite the general lack of dried fruit in this country.

But I’ll have to tell you more about that later. Hope you’re all enjoying the insanity of the year’s end, and it’s not all getting to be a bit too much.

If you’re feeling overwhelmed, don’t forget to take a moment to have a cup of tea and enjoy a fruit mince tart. And while you’re at it, snaffle another one just for me- they haven’t been invented yet in Germany (is this EU thing even good for anything??!)