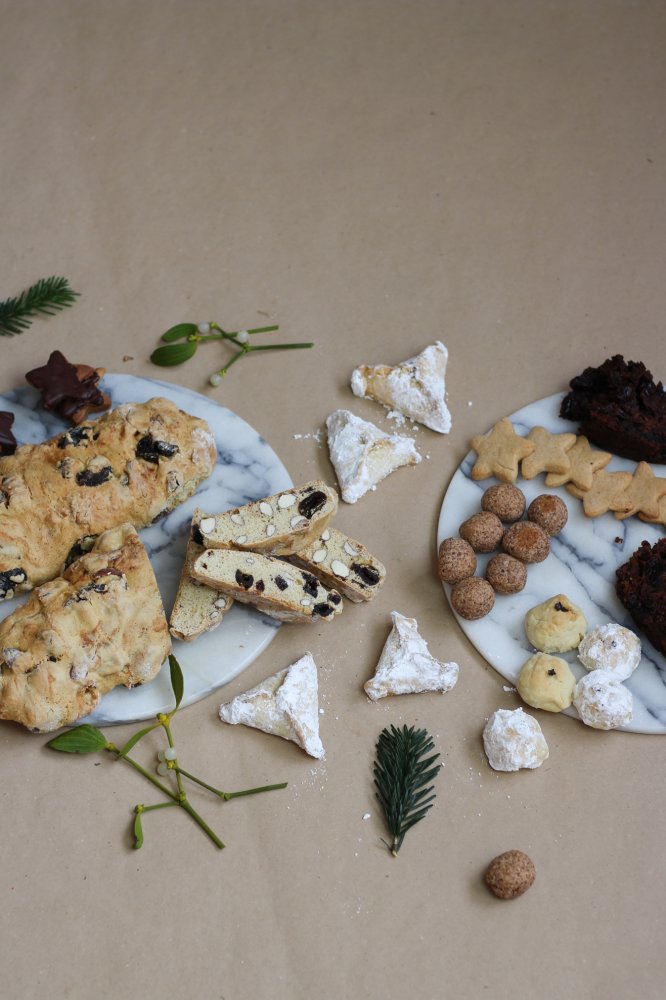 I’m not going to lie to you. I’m currently sitting in my kitchen drinking tea and eating Christmas Cake.

We’re going out for brunch, so I’m not allowed to have a real breakfast.

When I say Christmas cake, I mean this hefty log: It’s thick with all the dried fruits you can think of, which themselves have been soaked in alcohol, and then rubbed around in a little bit of melted chocolate before being barely-baked into supernova-density solid-ness.

The flour it contains is only there to connect one fruit bit to another.

This year is the first year I’ve made it myself, partially because (and I admit this with very little shame), I’ve managed to get one shipped from Australia to me a couple of times in the last few years abroad.

Even more so than you’d think, because the sulfur in the dried fruit gives me an allergic reaction that makes me scratch my arms and legs raw for months.

I love dried fruit, but I love it in mince-tart or cake form even more.

It was a bit tricky to find the dried fruits here, so I substituted a bit. Added dried apricots and cranberries as well as raisins and plums and soft turkish dates.

I burned the top a little, but otherwise, it turned out well. Cake all ’round! Apart form the cake I made the now-fairly-traditional gingerbread stars (and bells and trees), apricot-almond biscotti, cornetti, and ghorraeba. Gingerbread stars. How to.

Take a standard gingerbread recipe and double of all the spices. Then throw in a few extra shakes of each again just for good measure. Bake longer if you want them crunchy, shorter if you want them soft. If you over bake and the get a little dark, just dip them in chocolate. Find some apricot jam. Make sure it’s the cheap stuff. When first trying to recreate the inherited sweets we tried using ‘conserve’. We wanted to improve, to up the taste and quality.

This was a mistake.

The cheap stuff has a lot of sugar, which boils and caramelises and seals the little dough triangles to themselves.

If your cornetti don’t look pretty, drown them in icing sugar. It’s just flour and butter and and sugar with a clove in the middle. You could make perfect flat-bottomed spheres.

Or you could just embrace the term ‘rustic’.

And cover it all in icing sugar. I didn’t make Kahk this year. Mostly because I had a bit of trouble getting myself organised, and I rely way too much on Amazon to get me the rare can’t-be-found-in-deutschland things.. like dates.

As a disclaimer, and in cas it’s something that might put you off visiting entirely, I should mention that Germany has dates. And given that this Kahk date-ring stuff is originally from this side of the world, it probably has the right kind of dates for the original sweet.

But to me, Khak needs a dark and caramely date.

The Amazon package came over a week late. So no Kahk.

But I did use the on-hand not-Aussie dates (which are anyway Iranian dates), to make a new kind of sweet. The name is pretty self explanatory really.

Make a blend of butter, tahini, dates and a little salt.

Freeze the mix in approximate spheres.

Dip them in dark chocolate. Up next was biscotti. Dried apricots (the type that doesn’t have sulfur) and almonds. Add a bit of flour and lots of eggs. Bake it twice.

You’ll have egg whites left over.

Whip them into a foam, add some cinnamon, some sugar, some almond meal.

An you’ve got cinnamon balls: That’s all for this year’s run folks.

In the end I managed to whip everything up in a six hour frenzy last Saturday.

And then Andy spent another six hours trying to wipe all the icing sugar of the ceiling.