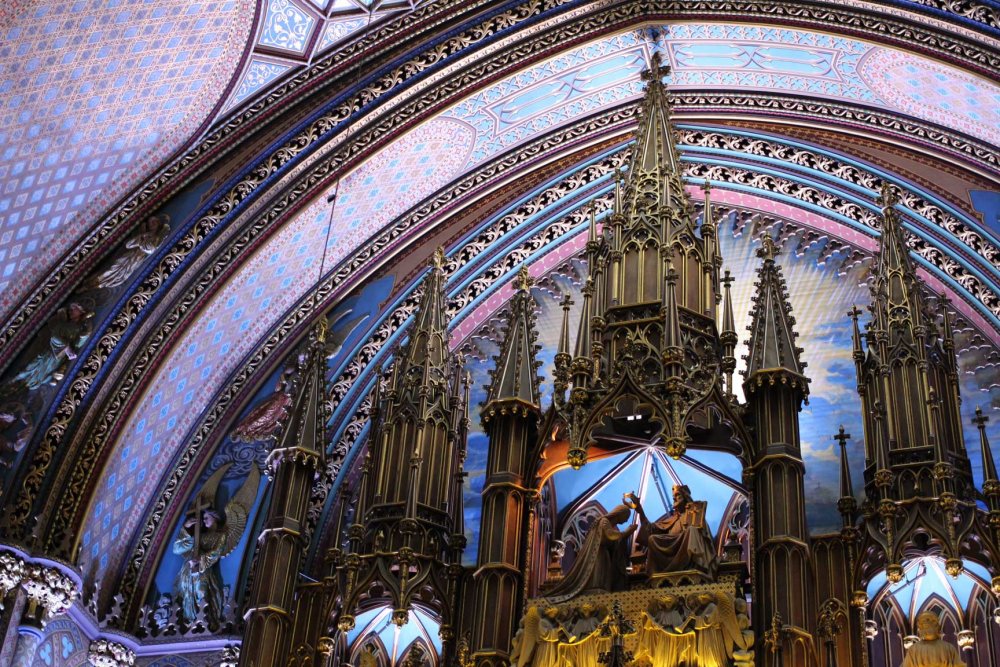 It feels right to begin Montreal with a church. Mostly because I have that ‘Catholic Confession’ feeling running through my head whenever I think of all things blog related.

“Forgive me I have sinned. It has been six weeks since my last blog post” I made it over five years you guys. Five years of posting weekly, or thereabouts. But the last few months hit me pretty hard with life and work and, what my dear friend would call ‘re-equilibrating’. And at work I’ve been writing a paper, which left me feeling swamped and unable to read or write or look at any other words.

Or at least not so much done, as ‘submitted’: entered into the iterations game of rejection, modification, resubmission, and so on… But still. Done. For now. For me.

I submitted the paper on Thursday evening, three weeks ago, and on Friday morning flew to Montreal for a conference.

Where I was met with perfection! Ok, not this guy, and not the church either.

And ok, also, the word ‘perfect’ is something that makes me feel all kinds of icky, and (even) Montreal is not that.

But I loved the city.

Even coming from a place of cynicism and suspicion- or at least wariness and ‘I’ll judge it when I see it’, I was enamoured. My friend had visited Montreal, for a week,  and fell so deeply in love that she decided that her future would absolutely be in Canada. This attitude, obviously, fueled my skepticism. But! How wrong I was!

While I’m not quite ready to pledge my soul to the land of Maple Syrup, I have to admit that I am pretty impressed.

Largely, I think, because it has many of the things that Berlin lacks- and that I miss about Australia. Friendly people, proper multiculturalism… the dumplings that come with the aforementioned multiculturalism.

But more on that later. In any case, I traveled to Montreal for work: a conference, or in my case, two (slightly overlapping) conferences. The conferences were exhausting (how do we expect teenagers to pay attention 8 hours a day at school? I find it hard to sit through 2 hours of lectures without proper caffeination!). But they were good, and they did leave me feeling once again enthused about my chosen topic of study, which is pretty much the best I could have hoped for.

In between the conferences, my colleagues and I went to check out some sights, including Montreal’s number 1 (I assume, I am too lazy to google) attraction: The Notre-Dame Basilica. I’m beginning the cathedral tour with this little window owl. I’m sure it has some other significance, but to me owls are always Athena. I don’t believe in any gods, but if I had to choose one to pledge my life to it would be her. Unfortunately, pagan gods such as she must stay outside.

Luckily the same does not hold true for us non-god folks. So, honestly, I think this might be my second favourite cathedral in the world. My favourite is Sagrada Familia, not only because I am unoriginal, but because it simply is the best in the world. Objectively you guys. I challenge anyone to see it from inside and disagree. (I kind of hate the outside- what’s with all the fruit Gaudi?).

Anyway, this.. this!, is also all kinds of beautiful. Oh, and did I mention that they have this massive shiny organ? The whole scene looks like a still from a Disney movie. It is fantastic, in the most literal sense of the word. I’m honestly usually a ‘less is more’ person when it comes to churches. Not when it comes to my home. My home should look like a flea market met a library met a nursery. But churches. Give me a cold marble floor and grey vaulted ceilings every time. Now, however, I’m am starting to suspect that I just don’t like poor taste, terrible design and tacky gold. If you want actual details on the church you shall have to wiki in your own time. I did however discover that there is a sound and light show (??) on in the evenings, which I am now a bit miffed I missed. If you go, please see it for me. Or maybe I should just check to see if there is another conference in Montreal next year….