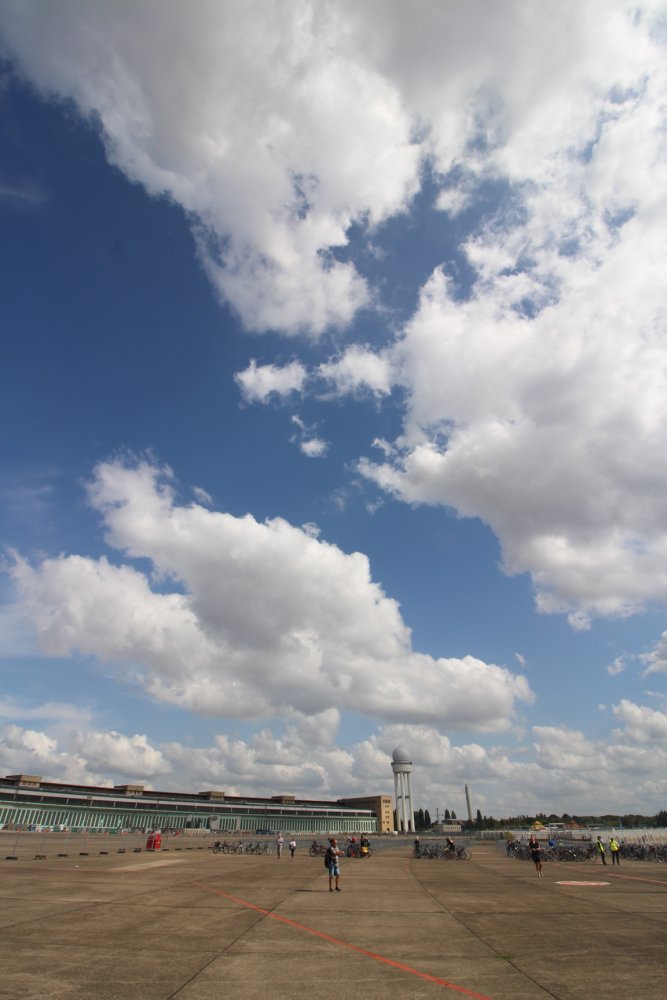 It’s been nearly six years of living in Germany, and over three of being in Berlin. And yet, until last weekend, I had never visited Tempelhofer Feld. The field is a huge ‘abandoned’ site of the former Airport (unsurprisingly also called Tempelhof), and, according to the everpresent wisdom of the internets, it is, at 355 ha, the largest inner city open space in the world.

Kings Park eat your heart out. The word ‘field’ is a perhaps imprecise- Tempelhofer is more of an ‘area’, which mostly includes grassland for picnicing and bbqing, but also kilometres upon kilometres of tarmac, for cycling, skating, windsurfing and drone flying.

It also includes the old airport buildings, which generally remain both closed and gated off. But not on this day.

We visited on the open day of the airport, in order to check out the old terminal buildings and hangers.

Although it only closed in 2008, the airport was first in use way back in the 20s, and underwent renovations and development during second world war times, so we were excited to see the ‘old-timey’ stylings of the inner halls.  And of course to comment on the things that don’t exist anymore, like nearly all of the advertised airlines (Bourbon air anyone?), and, I guess, things like this: Ind the end, although the buildings were quite beautiful, what was most impressive about the halls, and also about the hangers and the field itself, was the sense of scale. I guess the word that comes to mind is ‘expanse’.

Outside there were a whole lot of activities going on, but although one of us bought and consumed an icecream (me), and one of us tried and was prevented from boarding a very small plane (also me), we didn’t engage too much in the frivolities. Instead, we gazed in wonder at the hangers, took a few snaps, and meandered back outside into the fields. According to the official website of Tempelhofer Feld, taking a trip to THF is like ‘visiting the countryside without ever leaving the city’. I’m not sure if I would romanticise the concept quite that much, or at least not in that way.

Instead, THF is a bizarre statement to what Berlin is as a city (idealistic, sexy, but kinda ugly), and the fact that it remains is a rather beautiful success story in the city’s continued fight against capitalism and gentrification.

And, ok, I guess it might even make a fairly lovely picnic spot. (This photo was taken by Szym, who has an amazing talent for design and generally makes life more beautiful (and ordered!) with his shots. Check him out here.)