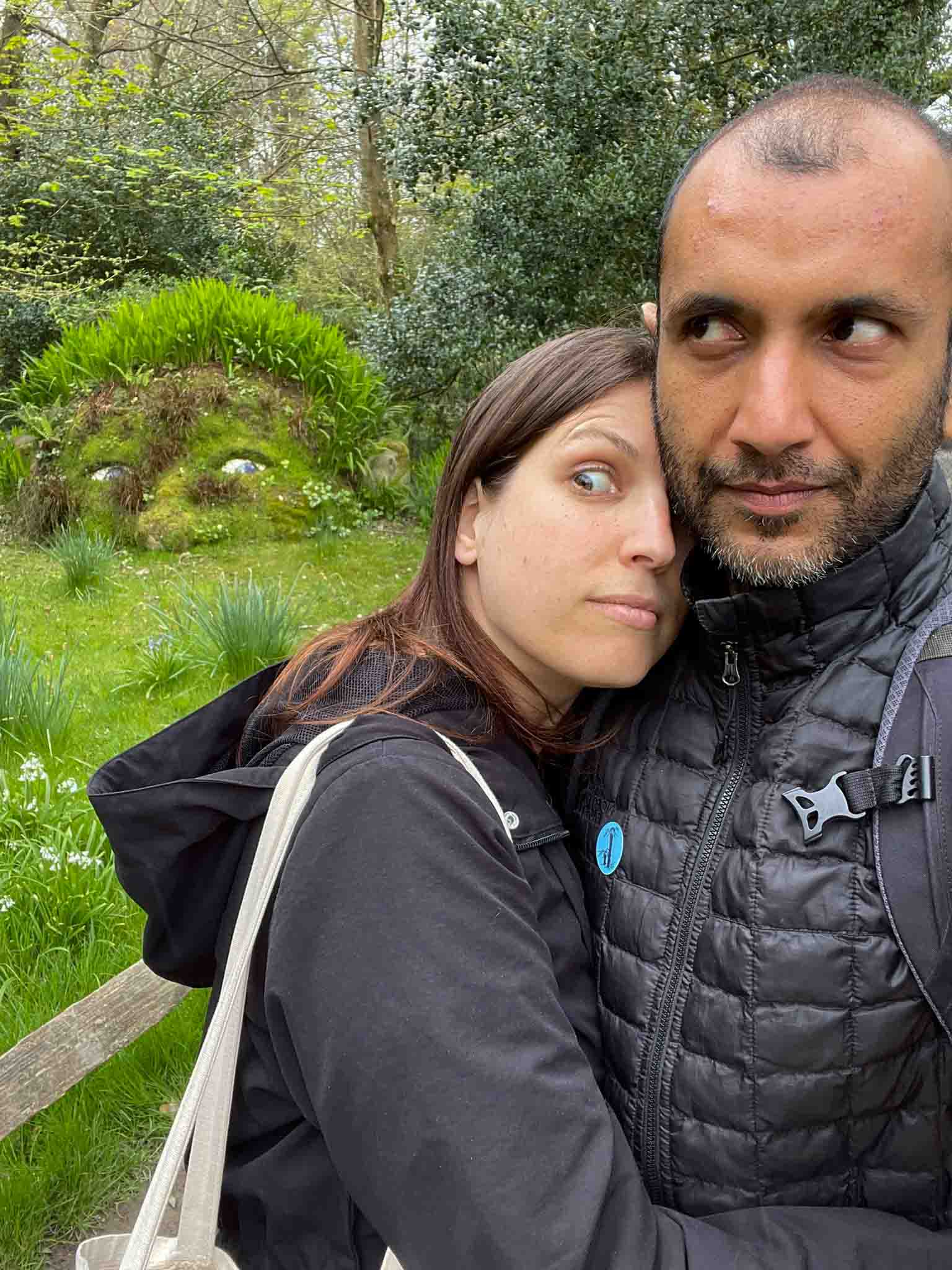 Our very-last-minute Eastertime Cornish adventure mostly involved lots of plants, a couple of Cornish pasties, someone eating scones with jam and cream in a manner that can only be described as ‘possibly offensive to the English’, and a few miles of strolling along the coast.

If I’m completely honest, the reason we headed out to St Austell for the Easter weekend was mostly because

In case you’re wondering if we found the bluebells…

Can you tell from my face that I was pleased?

(It’s possible that I spent most of the trip saying ‘Look a Bluebell!, and then grinning maniacally. In my defence, this was at least partially in response to Sameer choosing to comment every time he saw a cow, sheep, or horse.)

Anyway, before we got to the Lost Garden and its bluebells, we first had to get to St Austell- a 4 hour train journey from London. Our journey included some pretty amusing interactions with Nanki, who had the kind of energy levels that can only possibly exist in someone under six, and her brother, who was a walking encyclopedia when it came to ‘the world’s most dangerous animals’. On arrival we trotted quickly to the hotel to drop our stuff, and managed to make it to the only-running-every-90-minutes bus with a few minutes to spare. One of us even found the time to stuff an entire Cornish Pasty in her mouth.

Once at the gardens, we first took a quick break to eat some of the local delicacies.

Sameer met a scone for the first time in his life, and the scone met Sameer.

Apparently, there’s a bit of a debate about whether you should put the jam or cream on the scone first. Growing up, we always put jam on first, although this was probably because we tended to use whipped cream.

In Cornwall, the cream was almost as thick as butter, so it felt right to put that on as the base. However, according to the internets, the Cornish method prefers the addition of cream last, to prevent the (inferior) jam from smothering the taste of the cream. In contrast, people in the neighbouring Devon like to go cream first.

Regardless of your own personal preferences on the matter, I think we can all agree that this is not the way:

After a puzzling approach to scone consuption, Sameer then proceeded to enjoy his Cornish Experience by somehow ordering the only (vaguely) Indian thing within 500 miles.

Once we were fuelled up with all the calories our little hearts could desire, we set off to explore the Gardens, including its various arts:

^Bonus points if you can see that one on the left. To be honest, it took us a while.

Of course, we were very impressed by all that we saw:

Although in fairness to the art, it was mostly icing on the cakey goodness of a beautiful garden.

The Lost Gardens of Heligan were developed from 1766s. When the first world war came, the gardens were effectively lost- covered in brambles, with some of the trees cut down as part of the war effort and Heligan House used as a convalescence hospital for officers, then later sold off and developed into flats.

It wasn’t until the 1990s that the Gardens were ‘rediscovered’, and gradually restored to their former glory.

…Although I’m also happy to get photos of him doing… whatever this is.

Of all the places in the garden, I think my favourite was a kind of swampy area just filled with giant rhubarbs waking up from their winter slumbers.

These things are magical, and I could honestly stare at them (and poke them) for hours.

Those claw-like young leaves, the spikes, the floral bunches.

The gardens have a nice mix of more manicured bits, more lawn-y field-y bits, more foresty bits, more swampy bits and so-on, which makes it more of a joy to explore than the standard ‘everything in its place’ formal gardens that you might sometimes see.

If you’re more of an animal person, the Gardens also come packed with some sheep, goats, and the creepiest looking pigs I’ve ever seen (Sameer loved them. I was not a fan. You will not find any creepy-pig photos on this page).

Or, if you’re into a whole different kingdom of life altogether, may I recommend to you the fungi??

If I’m completely honest, the thing that I was most excited about from the whole visit was this.

Spotted by Sameer in a tiny pond filled with a million tadpoles.

I know this might be a bit hypocritical for a plant-lover to declare Newt Views as the best part of the visit, but seeing real live Newts in the (semi)wild has always been a bit of a dream for me. We grew up surrounded by frogs, which I loved, but Newts aren’t really an Aussie thing. Instead, they belonged to that almost-mythical bunch of creatures that featured prominently in english children’s books but never seemed to convincingly be ‘of the real world’. See also badgers and moles.

The guys we saw were identified by my incredible ecologist housemate as probably smooth and palmate newts, and are in a late juvenile stage still (European newts mostly hang out on land once they’ve gone through metamorphosis).

In any case, I love them, and nearly fell in the water camera first multiple times while trying to paparazzi the little beauties.

From Sameer’s POV, I’m feeling that he maybe quite liked the giant pink rhododendrons, which included a particular and rare cultivar called ‘Cornish Red’.

The man has good taste: the unique collection of rhododendrons, as well as the camelias found at Heligan have given the gardens ‘National Collection Holder; status by Plant Heritage.

Anyway, that’s it, that’s our trip into the Lost Gardens.

The rest of the day was spent walking home, and then eating co-op sandwiches.