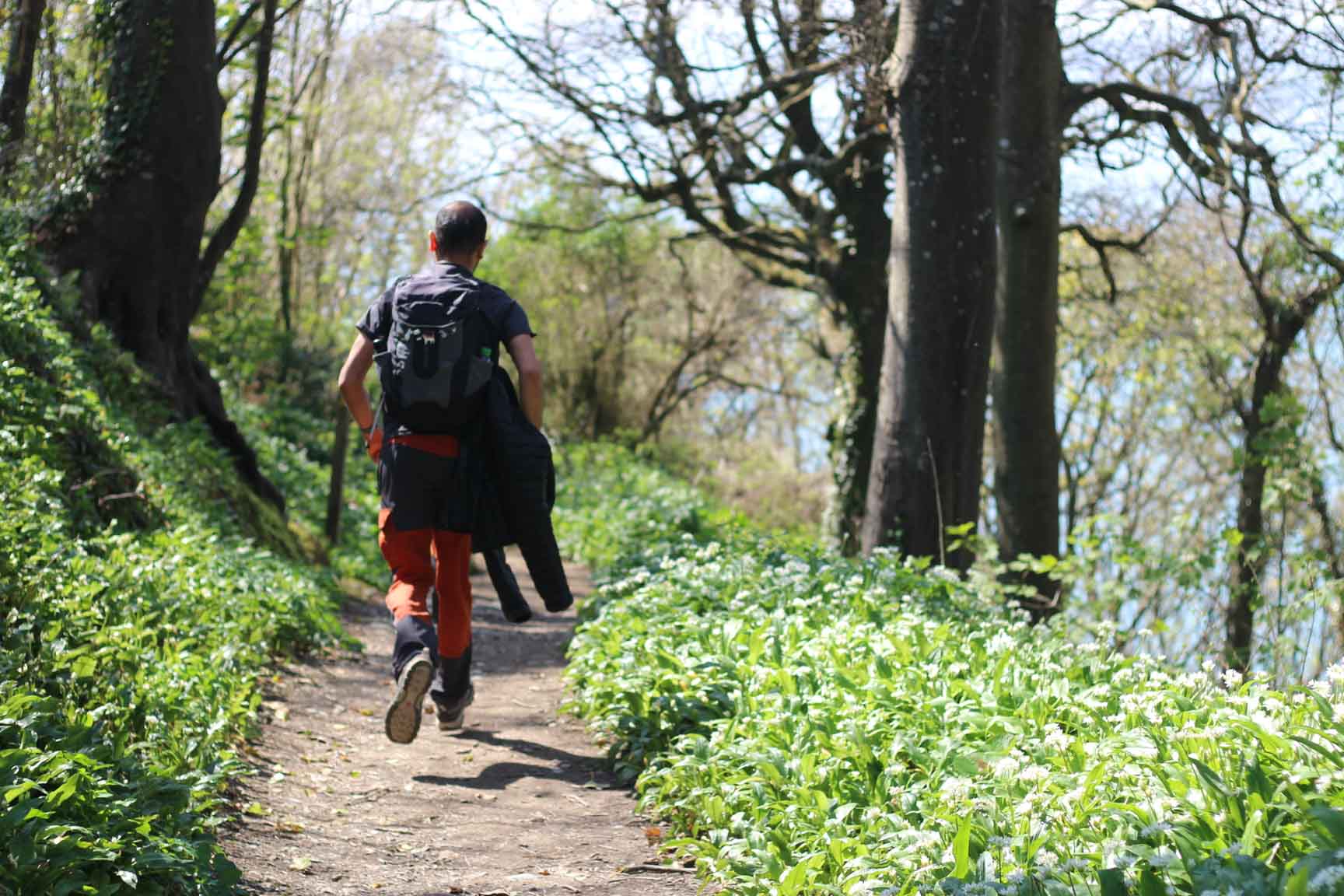 I can’t imagine why:

Our second day in Cornwall was mostly about walking.

And also a bit about cows.

For those of you playing at home, we basically walked down the hill to Readymoney Cove, and then walked along the coast up to Par. It’s only a 6 mile walk and should only take 2 hours, but we kind of ambled throughout the day.

We took the bus from St Austell to our first stop of the day- the One and Only Tristan Stone.

Sameer: ‘Shall we get off the bus a bit early and see the Tristan Stone.”

Tegan: Of course! We MUST see the Tristan Stone.

Despite my enthusiasm, I have to admit that I didn’t really know what this stone was all about before we stopped off. And to be honest, my post-visit googling hasn’t made me feel any more whelmed by what we beholded (did beheld?).

What I can tell us is that apparently it’s 7ft tall, might be the stone commemorating the death of Tristan of ‘Tristan and Iseult’ fame, and used to be closer to Castle Dore.

If that last part is throwing you, it turns out that they moved the stone ‘a bit to the left’, in order to build a housing estate. (I like to cite my sources and I would link the article, but it’s Daily Mail. Let’s maybe save those clicks for when we really need to see celebrities in bikinies or whatever.)

The first part of the walk- or I guess ‘the part that started once the glory of the stone had been experienced’, involved some kind of foresty niceness.

Yes! There were bluebells. And some of them were even pink.

After a very short foresty stroll, we found ourselves at the Readymoney Cove. It was nice, in a kind of ‘British Beach’ way.

We wore our coats, stared into the mist, and paid Readymoney to drink hot coffee (that came in nice reusable cups- well done Cornwall!).

Here is how we look post-caffeine*

*Obviously, Sameer had already taken down a whole family’s worth of coffee with his breakfast. But this is a sort of ‘freshly recaffeinated’ man.

And here is the beach. Why oh why is the sand this colour?

Of course, the problem with landing on a beach, is that it means that – pretty soon- you’ve got to go back UP.

Our next stop on the trail was St Catherine’s Castle, built in the times of Henry VIII (late 1530s) for the reason that the French and Italians were ‘starting to look suspicious’.

If you see something, build a castle.

The fear of the French continued into the Napoleonic Wars in 1815, giving St Catherine’s some nice business. Then, suddenly, things seemed less terrifying, so the castle was closed. Then it was opened again during the Crimean War (1855), closed, opened for WWII, and finally reached it’s ultimate position as ‘English Heritage site and tourist attraction’.

Here there be tourists:

My biggest regret is not bringing my crown.

The rest of the morning was spent walking up and down some cliffs, while the English sun came out, went away again, briefly shone, got shy and ran away, and then finally decided to actually do Springtime.

(I’m whining, it was actually a really nice day).

Here are various shots of Sameer looking photogenic near in some fields.

^That last one is full ‘catalogue’ pose.

Or, if you’re less into that, there was also a horse…

.. who I feel was frankly smug about his own ability to climb hills and not be turned into a sweaty, puffing mess.

I honestly struggled a bit, even though it wasn’t that steep, or when it was it wasn’t steep for long.

I clearly need some sort of climbing training.

The toughest ‘climb’ was going up to the lighthouse, which wasn’t even a lighthouse (Sameer tricked me), but is apparently just a ‘daymarker’???

Speaking of tricks, at some point while I was resting in the grass in front of the Gribbin Daymarker, Sameer started pointing out to the sea and claiming he saw a Gribbin in the waves. Hmmmmm

Of course, along with some nice grass, we also managed to see some pretty flowers, the best of which was the bright orange heath.

^The ones that look nearly-Australian are also always pleasing.

After a very brief stop in Polkerris (to eat some fishies!)…

… we made it to Par beach

.. At which point I was excited to finally hit a beach that was more-or-less white sands, while Sameer wondered loudly why noone had bothered to remove the seaweed (it was spiking his feet).

By the time we made it back to town (on the train, oh the shame!), almost everything was closed. In their defense, it was Easter Sunday.

So we did the Traditional Thing of going to the pub, where we partook in a Traditional Cornish Beer (St Austell is basically known in London as a brand of beer), which was.. fine.

Then we went to a Chinese takeaway, enjoyed listening to the host taking order after order of people who just wanted to eat chips with their curry (also ?), and then went home to eat some food and watch youtube videos about people who make or eat cheese. Which is my new favourite thing.