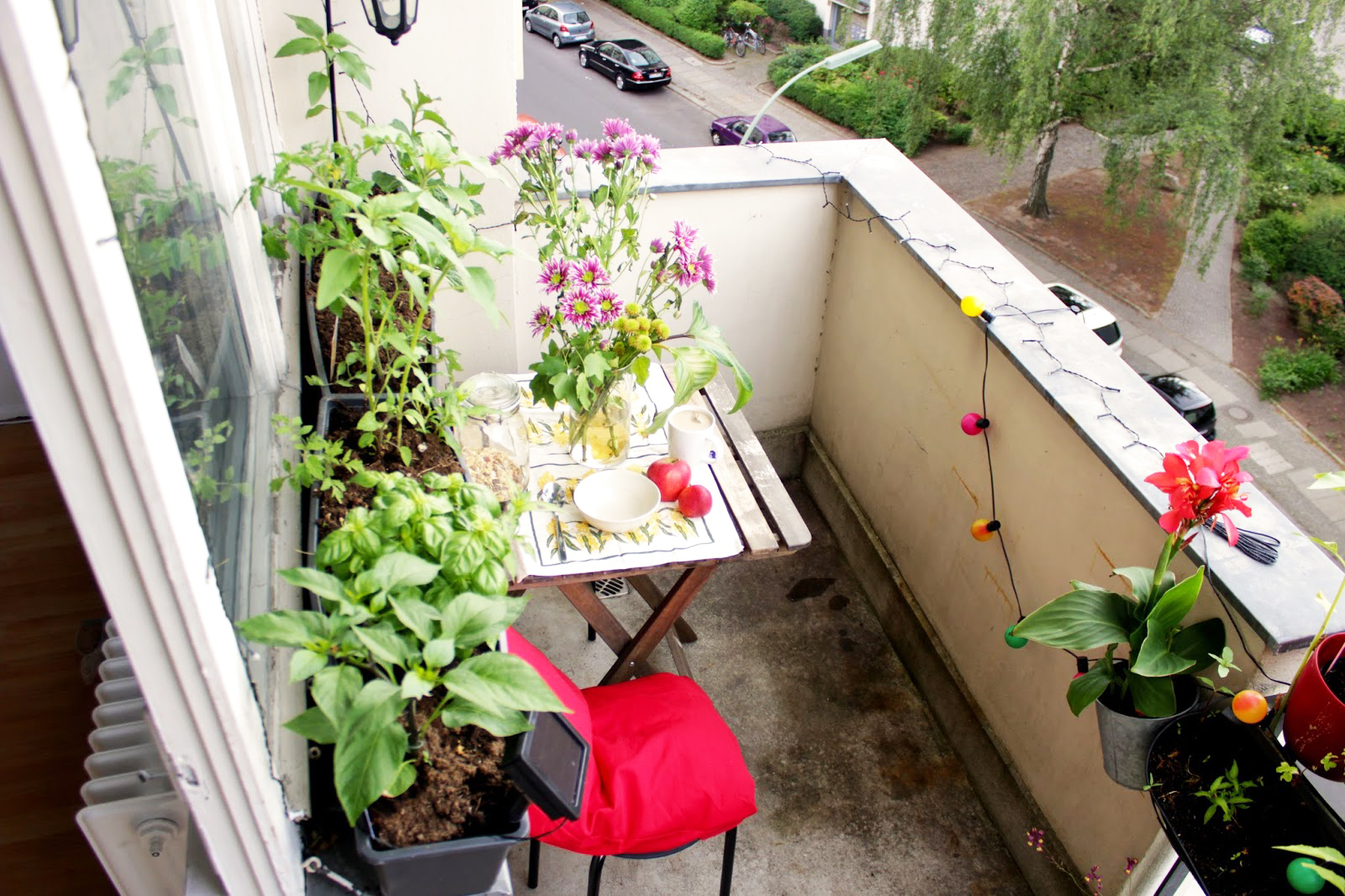 Fly back nearly six months’ time to the middle of Feburary, and you’ll peek in on Andy and I, after weeks of panic, joyfully being offered not one, but two of our possible Berlin favourite apartments. 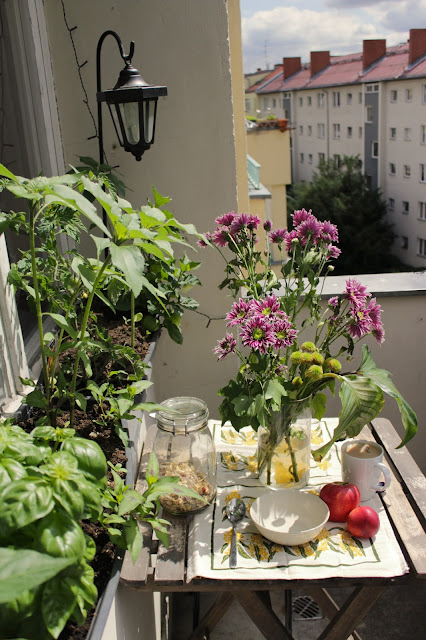 You might be surprised to hear that choosing between the beautiful, finished, kitchen-furnished, easy-commute, large-bedroomed place on Uhlandstrasse, and the kind-of-shabby, floorless, kitchenless, place with a ‘huge’ hole in the wall wasn’t that easy.

Because the second neglected thing- which, you might be even more surprised to hear, we chose- had ½ a room more, was in a super-beautiful location, and had a balcony.

And that last part, that sold it for me. Luckily, when Andy had finished writing up his pro and con list, he came to the same decision. The second location would be ours- it just needed a little love!

And for me, love comes mostly in the form of flowers! 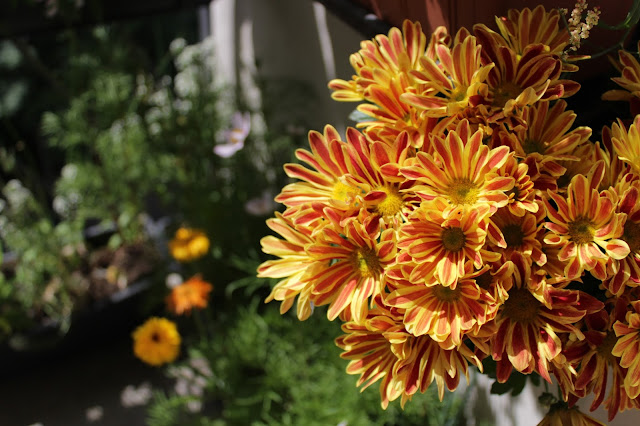 Last week we went to an English Comedy event where some guy joked about how much value Germans put into the Balkon: ‘You step inside, and then you get to go outside again’.

Dude. You just don’t get it.


Let’s step into our outside-inside shall we? 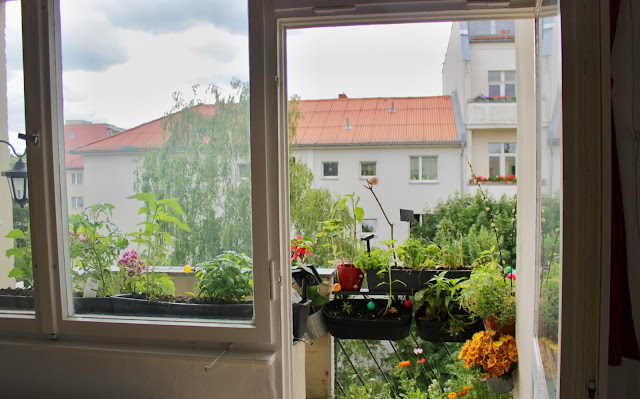 Our balcony opens from a single door- not quite as grand as the double-french-window set up of the old place- but nonetheless pretty darn inviting. 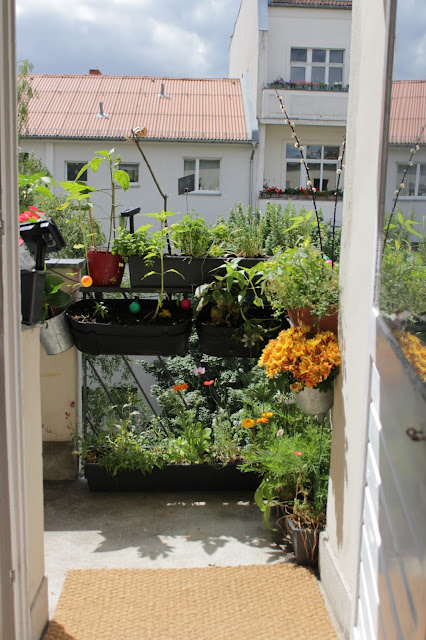 Can you see those tall things sprouting up? Sunflowers! We had four or five last year, and they were the height of my balcony joy. 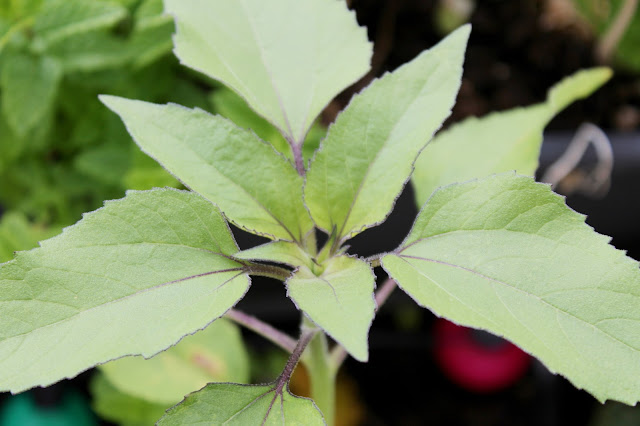 This year, I sprinkled a few leftover seeds, then panicked when nothing sprouted within a few weeks. So I sprinkled more- and now I have 10 or so plants vying for soil, space and water. 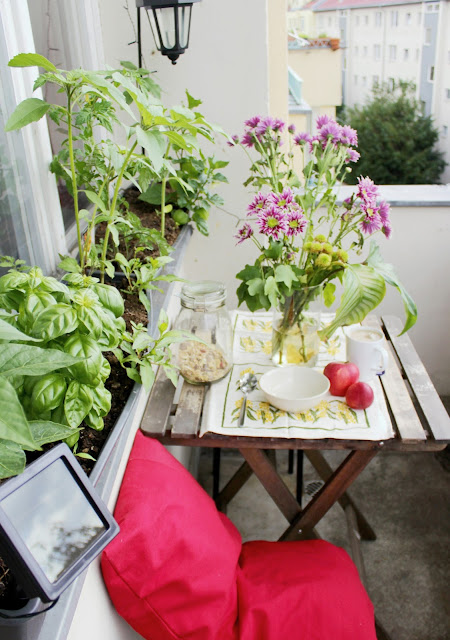 Hey mum- do you recognise the placemats?
A little reminder of home and our awesome Australia flora.

Last weekend we forgot to bring them inside and when a sudden storm hit (summer in Germany eh?), one of them broke free, flapped its wings and landed on the windowsill of a neighbour. Andy used his German Skills to sweet talk his way into the building, and then when the occupant wasn’t home, convinced the folks in the next appartment over to fish it from the ledge with some sort of broom. 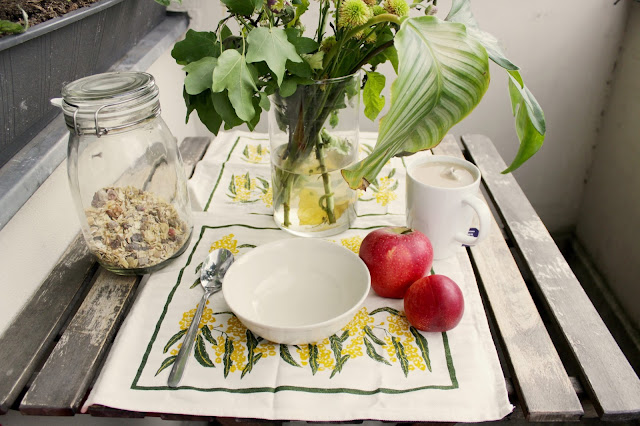 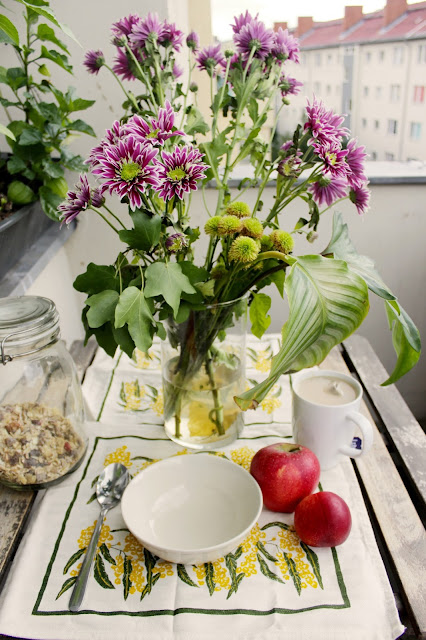 ^I’m super excited that it’s finally stonefruit time. Although the nectarines probably flew from Spain. I’ve also really got into Pink Lady apples- which are super crunchy and a little bit tart (their mother is a golden delicious). My friend at work just taught me that they’re actually Aussie apples- bred original in my own state Western Australia! 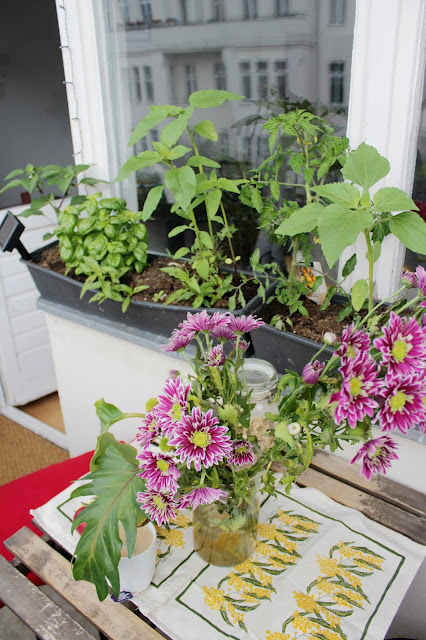 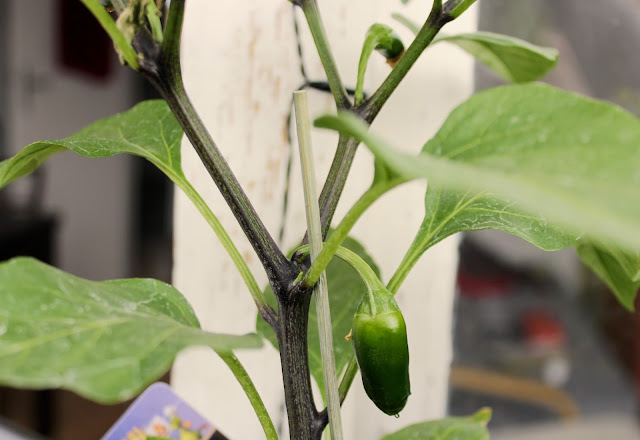 And a little tomato coming along nicely: 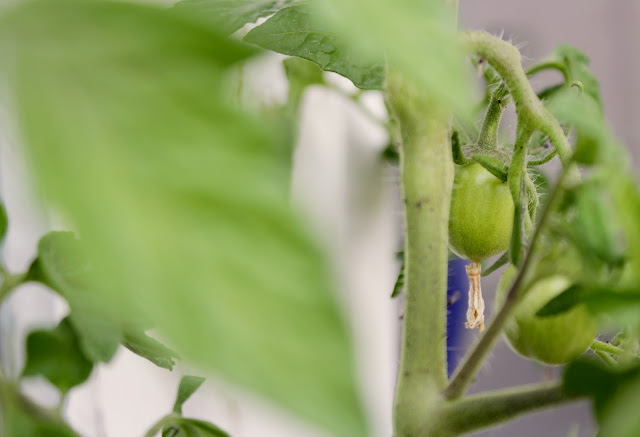 I have to give Weibke a bit shout out here- when we were moving from the old flat I felt a little bad and silly about asking our friends to lift my 20 or so planter boxes (filled with soil!) into the truck.
But we finished packing everything in record time (did I mention that our German friend gave us a little ‘Almost German’ assimilation nod due to our awesome organisation?), and then the planters just looked so lonely on the balcony ready for the tip.
And Weibke walked out, sized the lot of them up and told the men that they could definitely fit in our moving vehicle. Which seemed to decide the matter.
So in they went, and up four flights of stairs they were carried to the new balcony.
The new balcony is much smaller than the old one, and- due mostly to terrible design of the ledges- cannot so easily accommodate all my planters. So the rest are scattered inside (including our lovely well-lit bathroom). You’ll get those photos soon I promise! 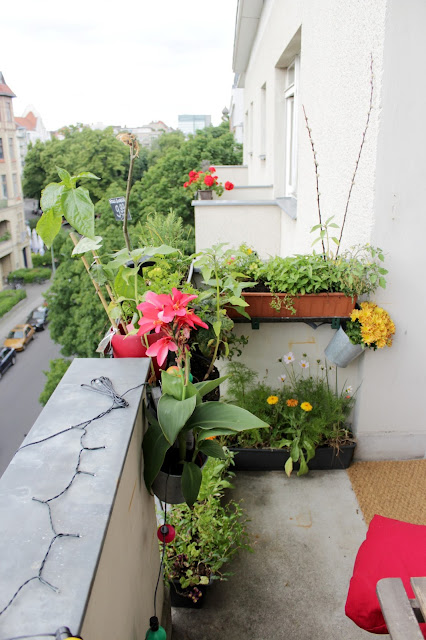 But for now, those planters are doing their best to be productive.

Which I never liked so much before, but right now just can’t get enough of. Especially with some avocado, tomato, salt and maybe a bit of sharp cheese. 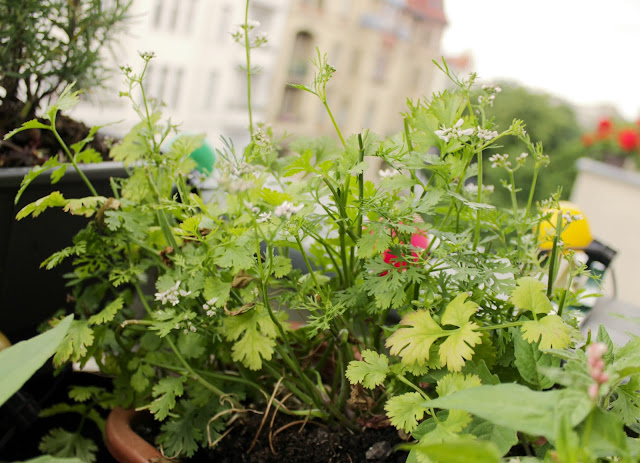 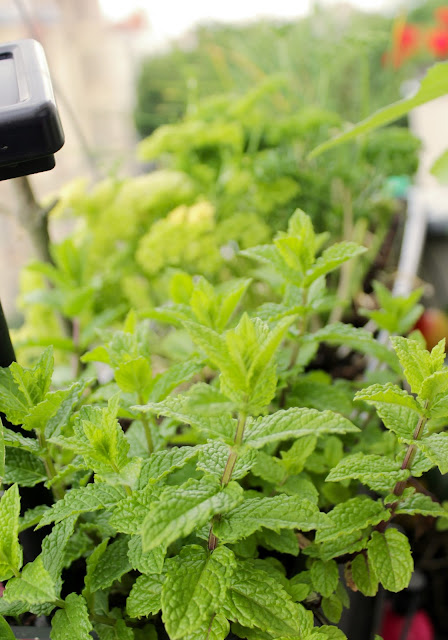 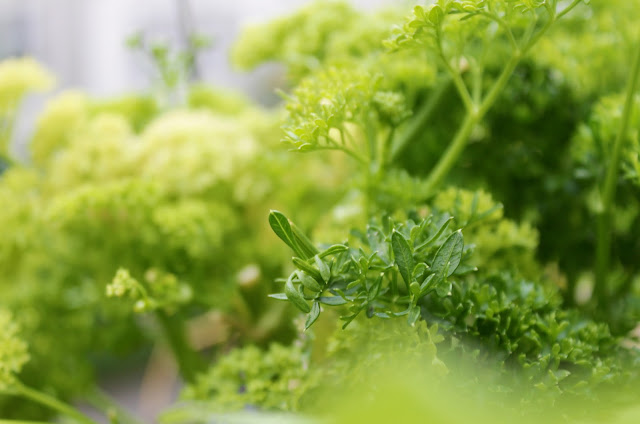 And of course, more sunflowers, and other assorted Pretties. 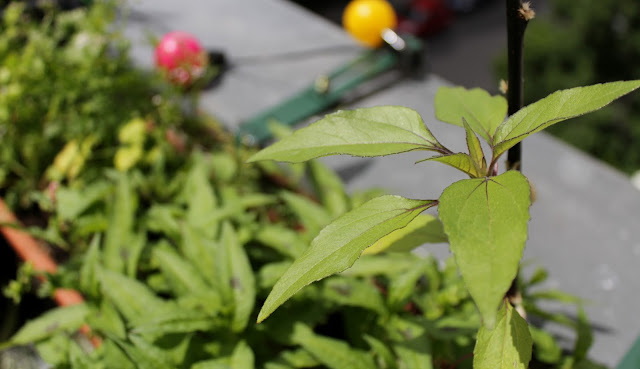 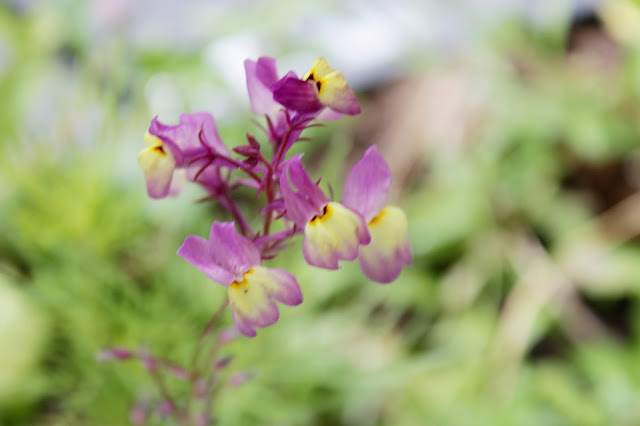 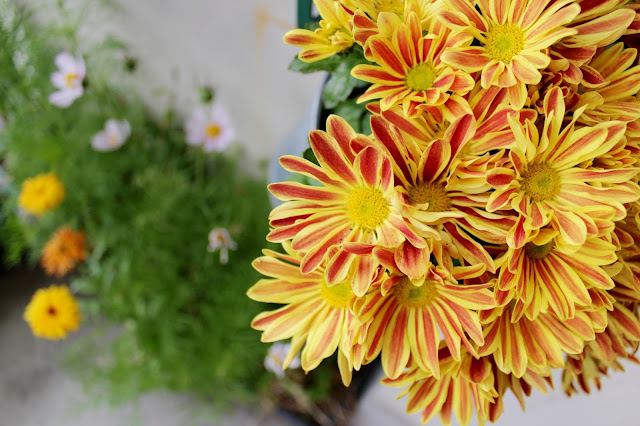 So what do you think? Can you get on the Balkon Bandwagon? 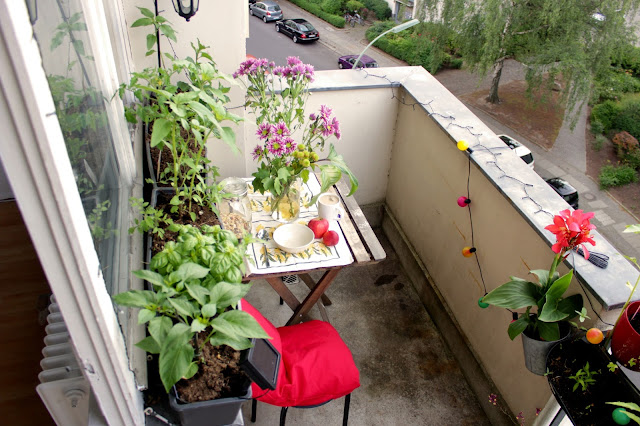 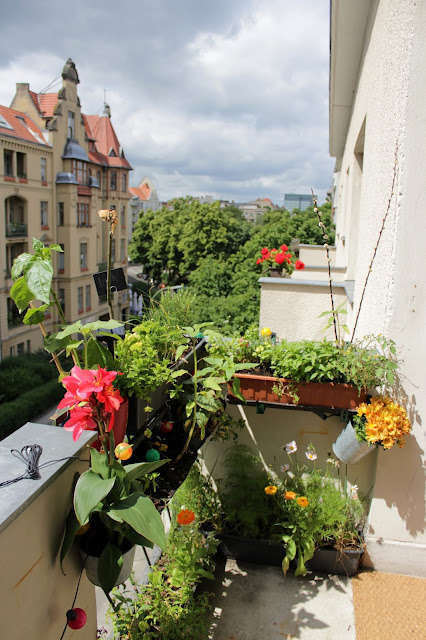