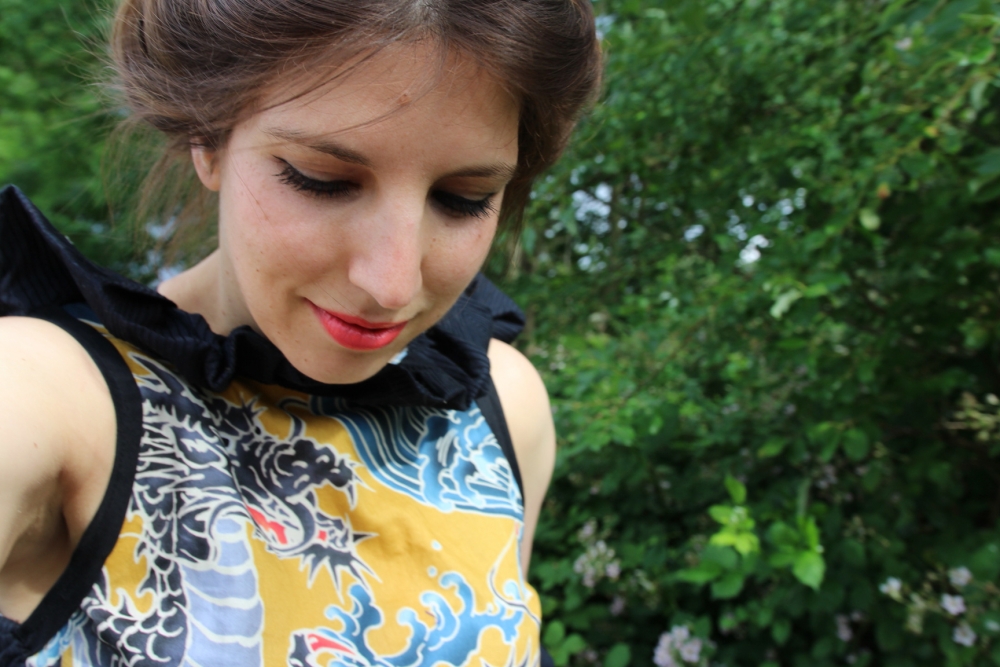 I may have mentioned that I’ve been sewing a lot lately.

This fellow, I actually finished back in Berlin, but never really got around to posting photos of it.

Anyway, the post is dedicated to my beloved Ashlee, because I suspect she is the only person who can really, truly appreciate my need for a ruff in my life.

This isn’t a True Ruff. But there are at least ruffles (also, Ashlee can understand my love for puffy sleeves and the likes, which stems from watching possibly too much Anne of Green Gables as a kid).  And, well, a mini Ruff I would call it. Ruff adjacent? As with nearly all of my ridiculous sews, I had a desire to make this guy somehow transformable. (See also the epitome of this desire over here).

So the front looks a like this. Solid black neckline, with ruffles that run along the front (only) of the armholes, and then fall into the side seams.

Here’s a shot from the side (with bonus, armpit!) to show that design. I think there is a slight tendency towards ’90s pillowcase’ here, but I like to believe that the dragon print is snappy enough to steer us away from that territory. In any case, I’m pleased with the dragon placement. He looks like he just caught you staring at my boobs and he is not pleased.

In reality, using the word ‘placement’ is a bit of stretch. I bought a total of 0.5 m of this material, and it didn’t come with a lot of width. Basically, everything I had is in this top. Ok, so here it is, read for the reverse show.

Wait for people to clear off the path (the photos were taken, awkwardly, using my octopus tripod and shooting on a public walkway), remove top, put it back on the other way around.

See? Now the ruffles are behind my arms: Oh and also? That Ruff-ino/Ruff-chen/Ruffling has made its debut: Of course, as Ashlee will understand, Ruffs call for dramatic poses. I think that middle one is the best, and definitely it’s that shot that I will release to the public when this country finally decides to grant me my knighthood. In all honesty, in the other two shots, I just didn’t know what to do with my hands. That, and maybe the fact that my housemate was watching ‘Centre Stage’ last week. Anyway, what do you think? Im personally pretty pleased with the make, mostly because it’s different from anything I’ve seen before.

And you know us dragons, we like to be unique.