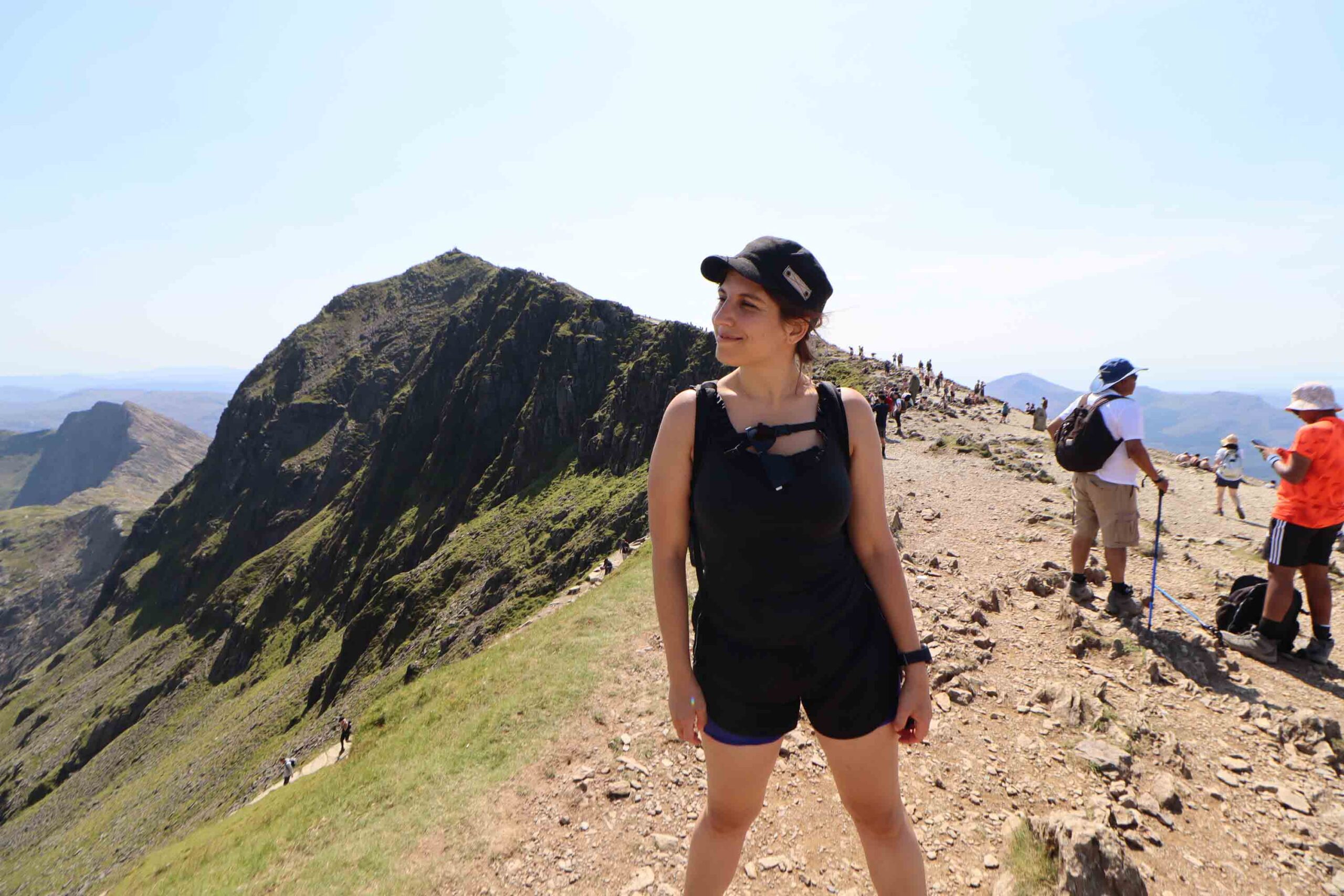 You Guys. I climbed a Friggin’ Mountain!!!

In fairness, *we* climbed the mountain. Not just any mountain, but the highest one in Wales, Mt Snowdon.

I may have subtly implied that Sameer forced me up the mountain. In fact, the whole thing was my own stupid idea.

The thing is, it didn’t seem like a terrible idea when I proposed it.

But the week we traveled turned out to be the UK’s second heatwave, with temperatures Snowdonia (the region where Mt Snowdon is located), up to 10 degrees higher than the August average. The day before we climbed Snowdon, we’d gone for what was supposed to be a ‘casual stroll’ in Betws-y-Coed, to the extreme sweaty discomfort of us both.

By the morning of the hike, I was already mildly terrified that I wouldn’t make it up the mountain, and that Sameer would not longer think I was both ‘so brave’ and ‘so strong.

In case you’re wondering if I continued to make this face throughout the whole journey, why yes, yes I did.

The whole Snowdon journey is expected to take about 7 hours if you go up the easiest way- the Llanberis path- which we did. The timing makes it pretty hard to miss the heat of the day entirely, and in the end, after mulling over the weather forecast (how many degrees increase each hour of extra sleep represented), as well as our respective desire to start the day with coffee (him) and breakfast (me), we decided to go Early but not Early-Early.

After a false start in which we somehow managed to miss the turnoff out of the one-and-a-half-horse town towards the literal giant mountain, we were off.

Luckily, the first couple of hours saw the sky covered in faint wispy clouds, which did their best to protect us from the full glare of the sun.

Unluckily, the first km or so of the path, which is asphalted and therefore not even technically the mountain I guess, is really quite steep. So I started the morning feeling terrified of just how early I might have to admit defeat.

On top of that, our first few kms involved us a)repeatedly being overtaken by a tiny child and his father, and b)having to stare into the smug faces of people who had gone for the early-early option, and were thus already on their way down the mountain.

Luckily, after a bit, things got a little flatter for a while, and soon we could see the half-way house ahead of us.

I immediately demanded an icy pole, which Sameer thought was a joke.

Weirdly, the halfway house had icecream, but no water taps and no toilet options, which means the whole area smelt a bit like pee.

As tiny trains obnoxiously chuffed their way up the hill, we too stumbled onwards and upwards, albeit at a much much slower pace.

There was a stretch after the halfway house that nearly killed me, and also made me super angry at birds.

Sameer, however, was pretty unfazed by the whole climbing thing.

I present to you: more of my stupid faces, and some of my favourite rocks that I sat on along the way.

At one point, I said something like ‘I’m just going to make it to that rock and then I’ll rest a bit’, and when I rested Sameer laughed because he thought I had meant a rock half way up the hill, rather than on about two stumbles away.

To demonstrate the necessity of my resting, I posed for him:

The weird thing about Mt Snowdon, is that it takes a fair while before you can even see the summit that you’re aiming for.

After that, it’s just a few more scrambles, and you’re basically there.

… but in the end the pause was probably a mistake, because once we got to the most summity part, we had to wait another 20 minutes or so, in a queue, before we could take those all-important top-touching photos.

Some idiots kept jumping the queue, and some other idiots spent about 8 minutes taking 498479797 photos of themselves when their turn came…

.. but eventually, it was our turn!

After that, all we had to do was come back down…

Overall, it was an insanely hot and exhausting day, and yes I did immediately get a headache and need a little nap the second we got off the mountain.

But you guys!!!
I Climbed A Friggin’ Mountain.

Maria would be so proud.