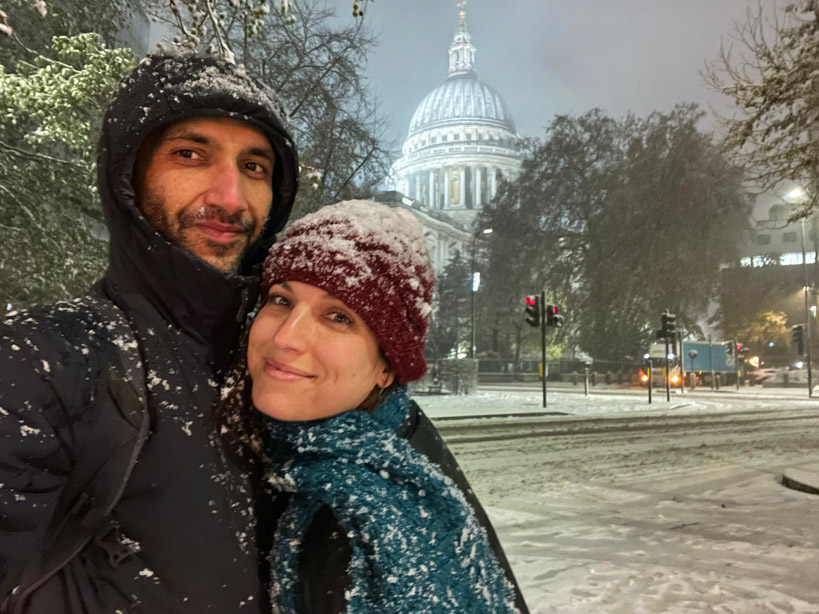 Featuring lots of silly photos of Sameer and I frolicking in the snow.

At the start of December, on a Tuesday morning, I found out that I had caught Covid again.

I took to (Sameer’s) bed, and we set up a kind of care system which involved a lot of soup being passed through windows, a lot of mask wearing, and a lot of ventilation.

All of which happened, just as a cold snap descended on London, and the temperatures plummeted.

By Friday, I had watched all of Netflix’s Wednesday, was testing negative, and was feeling on-my-way-to much better.

By Sunday evening things had progressed to ‘able to leave the house and eat food’. So after some short hangs with Sameer’s BFF and a station drop-off, we went out for very spicy food to clear out any remaining bugs clinging to my person.

As we entered the restaurant, London was doing that pretty gross sleet thing. Objectively the worst kind of weather…

.. But as we ate, it slowly turned in to proper snow!!

Snow in London is pretty rare, and snow that actually sticks to the ground and hangs around for a bit is even rarer.

I once heard that the idea of a British White Christmas mostly exists because Charles Dickens happened to be a child at the time of a particularly cold decade or so, and subsequently romanticised and immortalised the concept in his texts.

In reality, it’s just not that common.

Luckily, we’d come prepared for terrible weather, and some of us even had gloves in our pockets.

All the better for snowball throwing my dears…

Sameer did not approve of being a snowball target, but did allow me to throw a few at some buildings.

Burn capitalism and all that.

Mostly, we walked around, enjoying the very quiet and still and beautifully covered bits of London, as well of the more raucous parts filled with parties frolicking and holding snow battles.

The look of the city, particularly in parts with more yellow toned globes, as well as areas with stark architecture, such as The Barbican:

A few days later, the snow was still sticking, so I left my icicle-laden house with my camera in hand…

… and went for a walk through the snow-covered lands….

I had planned to take a walk to the coffee shop, but discovered fairly quickly that

After spending about 40 minutes walking a normally-10-min-distance, I gave up and headed back home…

With most of the return journey involving walking down the middle of the road to avoid slipping.

And then, a few days later, we were shoved unceremoniously back into rain and dark and grey.