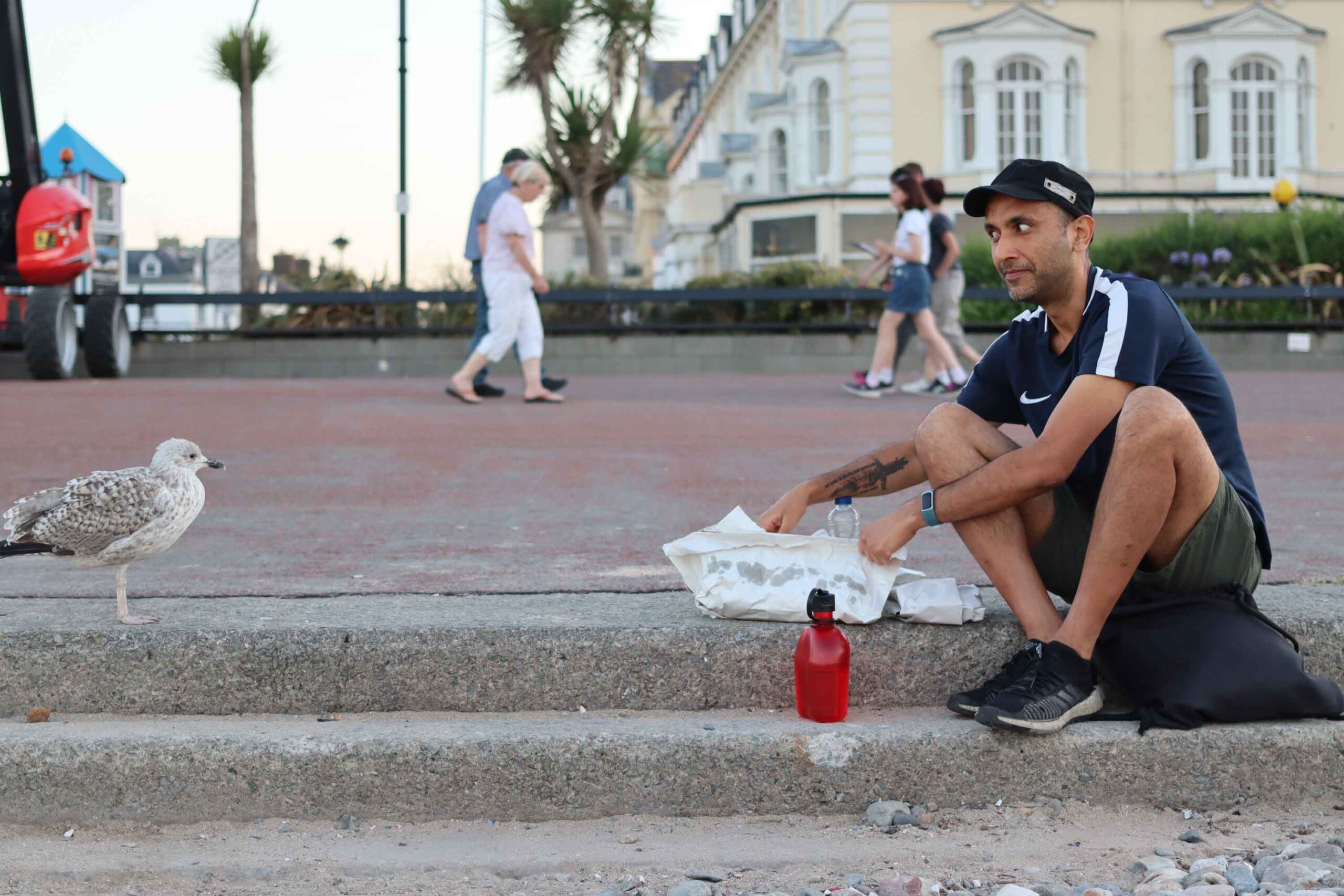 Our weekend in Wales didn’t begin completely smoothly. Even before we left we learnt that out trains on the way back would be mostly cancelled and fully chaos, and the journey out was slow enough that even a heroic run from platform to platform couldn’t save the connection.

Still, waiting for the next train we met a very kind Welsh man who was more than willing to make suggestions for our stay, so things weren’t all bad.

You know you’re in Wales when….

.. the signs have to be made in extra-wide format.

We were greeted at the station by some of the local wildlife, who regaled us with alarm-clock screams while we waited for our bus.

A short bus ride later, we walked along the beach and checked into our not-quite-beachfront-but-beach-adjacent hotel.

The plan was to get some fish and chips, and head across to the Western shore, to watch the sun set over the sea, thus showing Sameer what it was like to live in a place where Sun Setting Over Sea is the Natural Order of Things.

The plan.. didn’t quite work.

The first fish and chip place we were told by our hotel staff to avoid, the second was closed, and the third made our food at such a slow pace that the only adjective I can think of to describe the amount of time is ‘geological’.

The weird thing was, that it wasn’t actually the food making that seemed to be holding the process up, but rather the food arranging. We watched in awe as the lady literally took 3 minutes to wrap our (already once wrapped) fish and chips in two more pieces of paper. She didn’t seem confused, or stressed or properly distracted. She was just…. slow.

In any case, by the time we got our ‘fast’ food, it was too late to make it to the West Side by sunset, so we scuttled back to the east and instead watched the pier and rocks turn a beautiful reddish glow.

… and soon enough, Sameer had to learn what it really meant for a modern man to fight for his food.

Once things had settled past the point of duskiness, and we had eaten our fish and chips, we made our way to the lights of the nearby pier.

It seems that beach towns in the UK come with a mandatory pier, which itself is decked out with small stalls, some rides, and a kind of games arcade.

In my mind, this is because the weather here is so awful that you can never be assured that a day at the beach will actually allow any beaching: there has to be back up activities.

But who knows, maybe it’s just a weird cultural thing.

Speaking of weird, Sameer immediately noticed that the pier had coffee, and decided that 9pm might be a nice time to partake in one.

We walked along for a bit, and watched the sunset for a bit, being sure to take all the cheesy photos.

And then I decided that we should try our hand at pier gambling/arcade games.

We played a very boring thing where you use coins to push other coins and won nothing, and then played another thing where you throw balls at objects to make them fall over, which I enjoyed but was still not actually good at.

Two pounds poorer, we made our way back outside…

Not great photos, but the Moon was Incredible that evening.

After a few minutes of moon staring, and Sameer doing some top-notch posing, we headed back to the hotel.

And to be honest, that was mostly it for Lladudno.

In the morning we breakfasted, looked a bit at the ocean, wandered through town to buy Sameer a hat (which he lost within a week), and slowly made our way to the train station.

And then, with adventure in our eyes (mine, Sameers eyes are just saying ‘where is my next coffee’), we headed out for Betws-y-Coed.