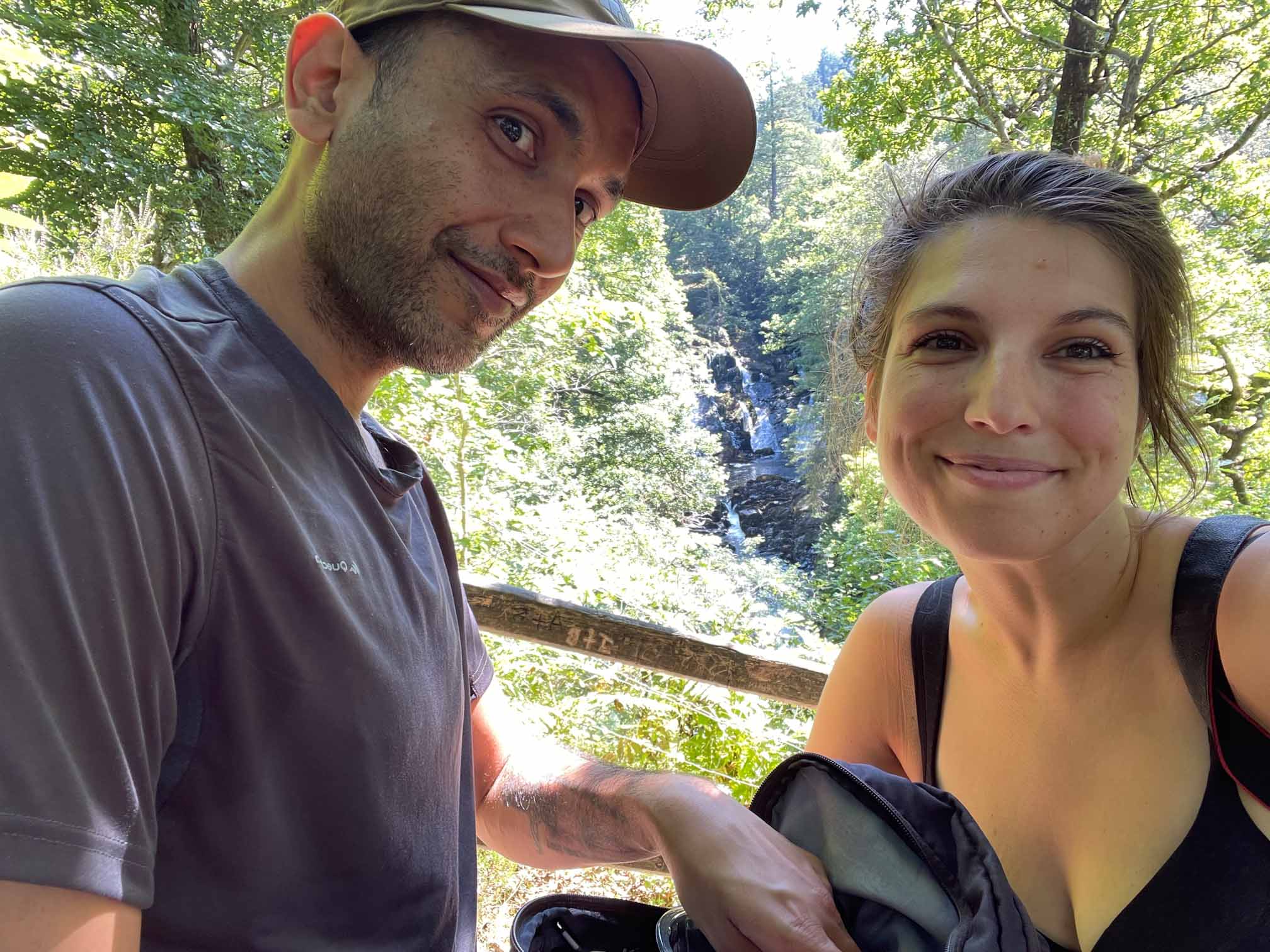 It had to be done.

Just a post to finish up on our trip to Wales, which was now oh-so-long ago (mid August).

After our first night and morning in Lladudno, we headed of to the quaint town of Betws-y-Coed. I’m still not quite sure how to say that properly, but have now at least learnt that it translates to something like ‘Prayer House in the Woods’.

When I was looking up places to visit in Snowdonia, Betws came up often in the ‘top ten to see’ lists, with the words ‘picturesque’ been thrown around a lot. Most of the photos showing of the village were something similar to this viewpoint:

Which well, as you can see, we did view.

.. but we had also heard there were some nice mini-hikes/walks around the area.

Given our plans to Scale The Giant Mountain the day after, it seemed like a good idea to do a little warm-up stroll.

But before we got to the hiking, we first got off the train, met with some interesting creatures, and went into the even-more-interesting art gallery that they were associated with (something about caged animals that had some beauty and some confrontation).

We had some coffee and did a little walk around the very small town, and discovered- unexpectedly- that there was no location or lockers to leave bags.

So we had to lug them around with us. Which made things extra hot and steamy on the already-quite-hot-and-steamy day.

We choose a path that would lead us to a waterfall, and headed off into the forest. Over some boardwalks….

.. and by this super exciting path sign that Sameer realised could flip and therefore flipped about 20 times.

At one point, I decided to be a hobbit:

…while Sameer focused on his quest for the perfect stick.

After a bit of walking and a lot of sweating, we found the waterfall.

To be honest, it was disappointing.

Maybe a hot droughty summer is not the best time to see a Waterfall in its Full Glory?

We had some snacks, and headed back into the forest.

For me, the whole tone of the day changed when we made it back to the river, and decided to try going into the really-quite-icy water.

While some of us were brave enough to splash and frolick, others were more about the light toe dipping followed by some gentle shade-lizard action.

Did I mention that it was insanely hot??

The swimming was definitely the best part of the hike for me, which makes me a little bit worried about my actual interest in hiking…

The overall walk up Snowdon was something that I found physically hard, and at times quite stressful. Sameer is incredibly fit compared to me, and I constantly felt that I was letting the team down with my pitiful crawl. While I did enjoy some parts of it (mostly the scenery and the downhill), I was definitely fueled more by determination, as well as a sense of shame that we kept getting overtaken by a 10 year old boy. It’s honestly a bit unclear to me why I made the decision that we would do a holiday in which we went up a mountain. My fitness really took a hit during the Covid times, and I’ve been trying to work on that, so I guess that was part of the whole thing. Still, I suck at uphill, and I know it. At some point I decided that we would do it, and from that point on I just assumed that it would happen.

As an aside, my death in the zombie apocalypse absolutely happens due to my belief that I will manage something that I am physically incapable of (see also- falling off my bike while trying to carry huge bags of soil home during lockdown).

In any case, I was feeling fairly ‘it will be fine’ about the Snowdon climb until the evening of Betsw-y-Coed. It was so so hot and humid, I felt exhausted by our tiny ramble in the trees, and the next day was supposed to be hotter. Plus, we knew the mountain would not be shaded.

In any case, with a lot of encouragement from Sameer, we made it up.

These last bunch of shots are from Caernarfon, the town we stayed in the night of the mountain climb. I may have mentioned that once we got down from Mount Snowdon, I immediately got a headache- so Sameer was very much in charge of bringing us back to the coastal town for our last night.

I took pills and napped, we went out for dinner, and we took some photos with the sun.

And then, the next day, because friggin’ Avanti trains had decided to cancel nearly all of the trains, we panicked our way back to Bangor and made the slow journey back south.