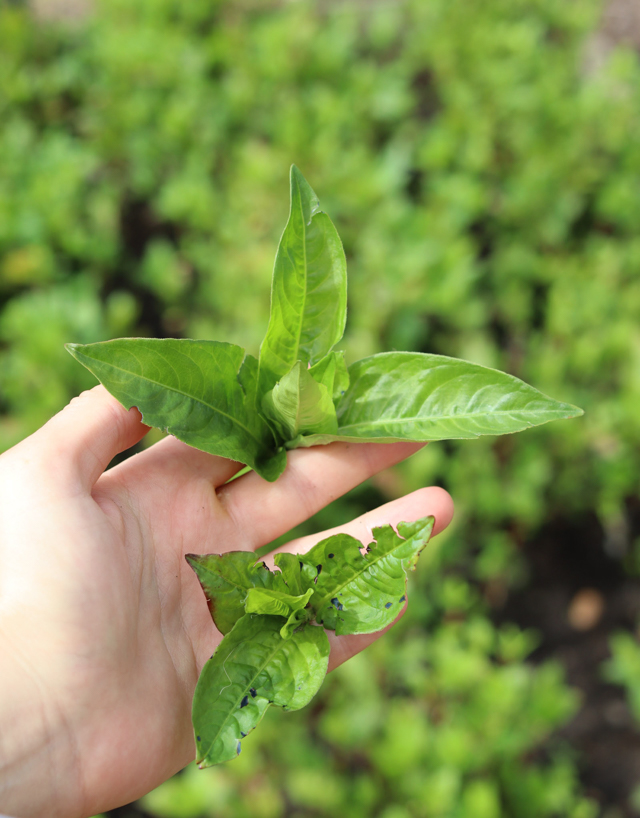 In the middle of August, I did a one-day natural indigo dying workshop led by a two-member team of dyers from Indigo Garden.

Most of the participants of the workshop had some dying experience already, and came at it with a strong ‘natural dyes’ or artistic background.

I was there for the crafts, but also, for the plants and the chemistry of it all.

Indigo- true indigo- is the species Indigofera tinctoria. The dyers were growing two different varieties- Senbon, and Kojoko, which have slightly different leaf shapes and flowers, but both contain the indigo dye pigment.

They also grow some Woad, Isatis tinctoria, which unlike the pea-family indigo, is a mustard-family plant member. Woad was used traditionally in European regions, and also produces blue (as well as yellow and even pink-ish) pigments, but has much lower content of the blue pigments than indigo, so was ultimately replaced- first by true indigo, and then by chemical processes.

We started the course with discussions about our backgrounds, and a brief introduction to the plants themselves, and then we began picking.

I love that you can already see the small amounts of purple-blue in places where the leaves had a bit of stress.

We picked about 20 or so young tops from the indigo plants (the top 10cm, or 5-6 leaves or so), stripped the leaves from the crunchier parts of the stem, wet the leaves, and then added some salt and started scrunching.

When the whole thing started to look a bit like boiled spinach, we added the fabric – a proteinaceous wooly felt- and kept up the scrunch and squeeze action.

The felt, and our hands, gradually became darker.

In the end, we had slightly different intensity and tone outcomes, based on how much of the plants we had picked, as well as how much we had been willing to keep up the scrunching.

Next up, we tried dying with dry leaves.

The dried indigo leaves can give a higher intensity of colour, but take a bit more processing, because the dye pigments within the plant have already bound themselves to the leaf’s cellulose.

We weighed out some dried leaves (10g worth), and did a bit more scrunching.

The first thing to do, is to remove some of the yellows from the leaves, a process that involved a gentle simmering of the scrunched leaves, and then draining (3x) of the water-soluble yellow dye pigments.

The yellows we used to dye some light silk scarves (again, a protein-based material). However, unlike with the blue colouring, which will happily cling itself to natural fibres, the yellow tones need the fabric to first be mordanted, a kind of preparation that helps the dye cling.

(In this case, the scarves had been pre-mordanted with 8% alum by our instructors).

Meanwhile, the spinachy remains, removed of their yellow hues, were thrown back into the dye bath, and simmered.

To the soupy mix made from 100g leaf, we added to 50g of pure calcium hydroxide and 25 g of potassium carbonate (to make the solution alkaline), and 25g of fructose (to help reduce the indigo, and therefore dissolve it into solution). More info on that here and here. Once the solution was all made up, the pH was tested, with an aim for something around 10 or 11.

You want your soup to simmer, without any oxygen getting in (no vigorous mixing here!). The addition of oxygen makes the indigo hang around in its blue form, which is not soluble, and therefore won’t soak into your fabric.

You basically want a blue sheen on the top, but everything underneath should be yellow, not blue.

While our dye bath was busy preparing itself (and cooling down-you want about 35 degrees for cellulose dying, and 40-50 for wool or silk), we prepared our cotton for shibori dying.

And then, we were ready to dip.

The dying process requires iterations, because you’re aiming to soak the liquid into the cloth, but you also need to be opening it up to the air to allow those yellows to set into blues in between each dip.

Our dye bath wasn’t super concentrated, and we had about 10 eager students dipping their way through it, but we still managed to get a fairly impressive blue colour after 5-6 rounds.

My already-blue hands became a little bluer in the process too!

After the final dipping, we rinsed the cloth in water, and then hung it out to dry.

It was pretty cool to see all the different patterns that everyone had come up with. I’m personally pretty terrible with spatial understanding, so my gradient stripes (above) came as a bit of a surprise to me.

While we were waiting for those to dry, the teachers showed us how to make a similar dye bath using processed pigment, showing us how to first hydrate the indigo by making a loose paste, and then add it into a final solution of about 10g per litre.

We also did a very quick simmer of some fresh woad leaves, which came out with a delightful mushroom-y pink colouring:

The final thing was to dip some silk scarves into the woad….

… to play around with mixing colours…

.. and to gaze in wonder at the indigo extraction vats the course leaders had going!

Overall- apart for the annoying overlap between interest in natural dying and interesting in climate change denying/covid denying that one participant felt like expressing, it was a pretty great day.

I’ve managed to buy some indigo dye powder, so am going to be trying a bit more shibori, and maybe even some resist dying myself in the not-too-distant-future!