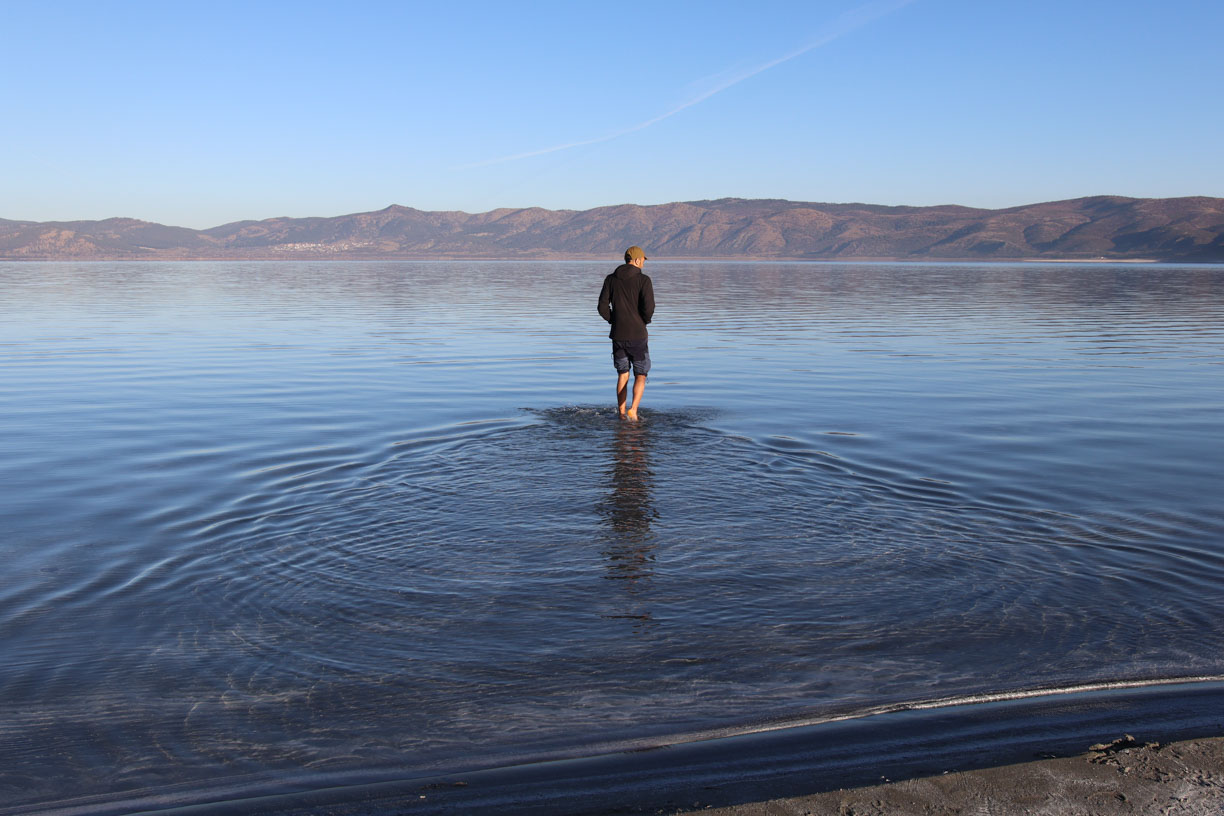 On our way to Pamukkale, we stopped by Lake Salda, which is apparently known as the ‘Maldives of Turkey’…

… which I think is just a fancy way of saying that it’s really pretty.

I wouldn’t know. I have not been to the Maldives.

When we arrived, it was also really really, really cold.

The type of cold that comes up through the soles of your shoes, and makes you overuse the word ‘crisp’.

The group of us on the day trip huddled sleepily out of our small bus, and wandered down to the shoreline.

Sameer, who has never been to a place that he hasn’t first read all of the wikipedia about, came up with some very cool facts about Salda Lake, which included that “the minerals and rock deposits at Salda are the nearest match on earth to those around the Jezero Crater where the spacecraft landed.”

^That’s apparently an actual quote from a NASA person.

So, not so much Maldives, but pretty much Mars.

Which is cooler anyway.

Particularly in the literal sense.

Despite the threat of extremity loss, Sameer decided to dip his fingers in…

…and then, being #SoBrave-r and #SoStrong-er than the rest of us.. he actually ventured into the freezing waters with his real live feets.

And then fairly rapidly ventured back on out…

Meanwhile, these Dogs and I stood sensibly in the sunshine, and loudly commented on the fact that the water was literally frozen solid in places.

Sameer re-dressed, and after about 10 minutes or so could even begin to feel all his toes.

After about 20 minutes, he was still commenting on the fact that he thought the other visitors should have been more impressed by his bravery.

For my part, the closest I got to going in was walking along the sandbar for a bit.

Even then, I regretted wearing my kind-of-open-to-the-elements sneakers, and very rapidly had to adopt a ‘huddled penguin pose’ to maintain any and all of my body heat.

Linked to the fact that it’s pretty much Mars on Earth, Lake Salda is also filled with hydromagnesite mineral, which may be what the white crystals scattered across the beach were (I’m no geology/chemistry person. It might just be NaCl for all I know).

It’s also supposed to be contain ancient stromatolites, which persist due to the maintained alkalinity of the water.

Unfortunately, those I couldn’t see.

In any case, Lake Salda is pretty beautiful, if possibly more of a Summer destination.

Which was a little bit of the theme of our Turkey trip.

Let’s finish on some cheesy shots shall we.