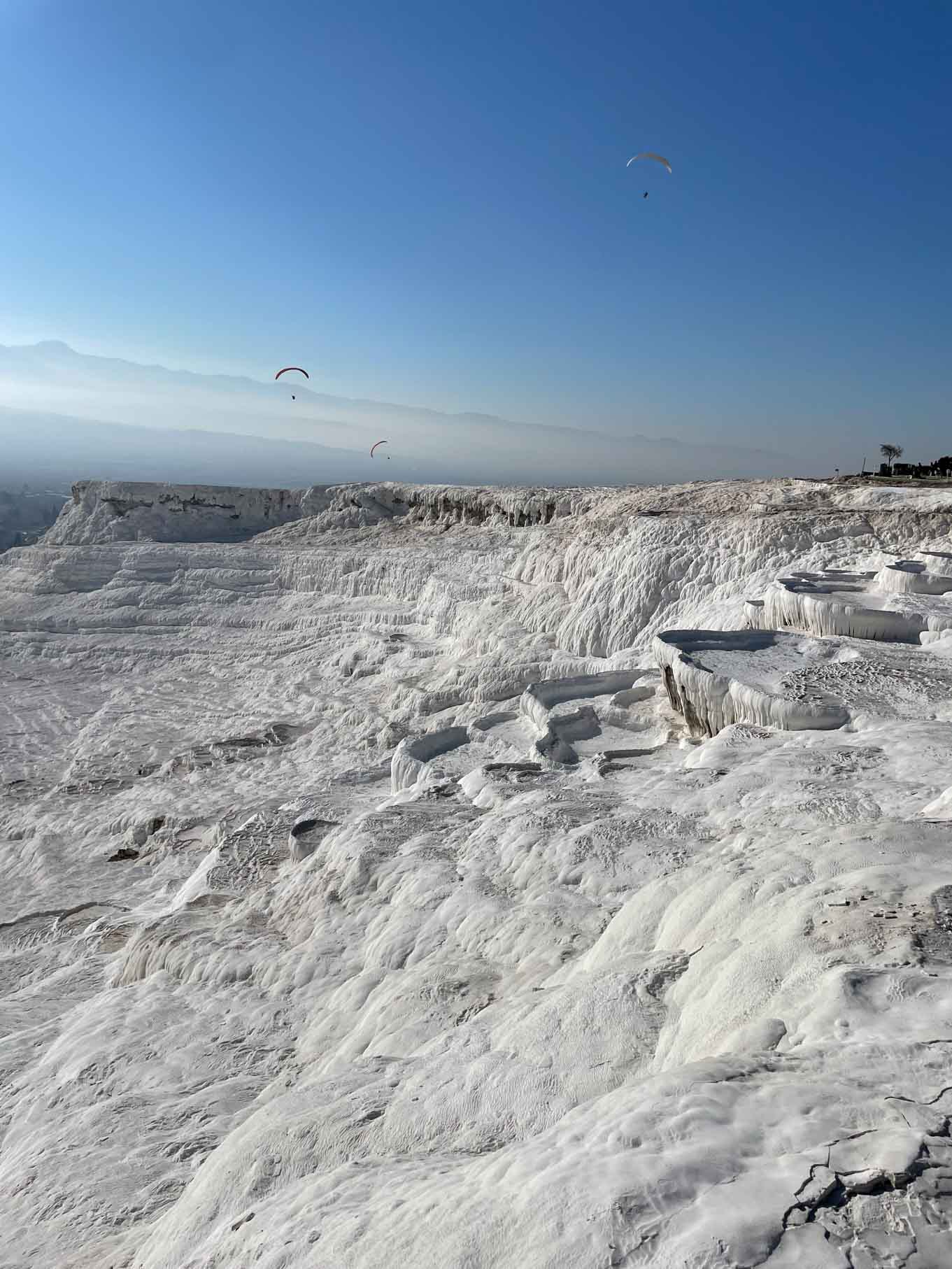 Over the Christmas break, we decided to make a journey to Turkey.

In part at least, because Turkey is a fairly easy country to visit from a visa point of view (and because, for reasons that start with B and end with a lot of ullshit, one of us has troubles getting into other countries).

It was Sameer’s first time in Turkey, but I’d visited once before with my ex and his family, in what was pretty awesome and comprehensive hit of the best and brightest tourist spots that Istanbul has to offer. We saw the cisterns, the Blue Mosque and Grand Bazaar, the Hagia Sofia and Spice Markets, briefly crossed to the Asian side, climbed the Galata Tower, and went to Topkapi Palace.

All of which to say, is that while I wanted to go back to Istanbul to experience it with Sameer, I also wanted to see some of the other shiny things that Turkey has to offer.

And when you hit the google button on ‘what to see in Turkey’, one of the first things that appears is Pamukkale.

And so we went:

To be honest, working out how to get there was not the easiest feat.

Mostly because we were only in Turkey for about a week (flights were expensive, we booked last minute, and we didn’t have any extra holidays to take off work), which gave us limited time for the travel part. And because of the whole expensive-flights and wanting to see the country a bit thing, we’d decided to fly into Istanbul, and out of a random town 800 km south east of it called Dalaman.

Apparently you want to go by bus or train, you have to first get to a town called Denizli, then stay a night, and take the next morning’s bus to Pamukkale. The alternate is to book a day trip, which is what we did.

And which, to be honest, I would not recommend. But more on that some other time.

In any case, after waking up way too early, and spending way too many hours on a bus, we finally made it to the site of Pamukkale, which also happens to be the site of the ancient Greek city of Hierapolis. We had a quick guided tour through the place, and then were allowed to explore for a couple of hours.

Pamukkale is a travertine, a formation of terrestrial limestone deposited around (hot) mineral springs. The area nearby has about 17 hot springs with different temperatures of water bubbling out of them (35-100 degrees), and the warm water that flows out has a tonne of calcium carbonate in it. Calcium carbonate is slowly deposited as the water flows across the cliffs. Which means, that although it looks kind of like salts, it’s much more ‘permanent’ than that. It’s basically mountain-shell.

(Throughout the trip, Sameer got constantly confused by the name cotton castle. Apparently, it doesn’t make any sense to him, even though we had multiple discussions about the why of the name. So from now on, maybe we can go with the mountain-shell name instead).

Anyway, you’re allowed to walk across the Pamukkale mountain-shell, so long as you take your shoes off.

Sameer raced in and across to the edge to stare at the impressive views, while I got a bit obsessed with staring at the colours, patterns, and feel of the deposits.

There are bits that are softer and more gel where the calcium carbonate is still hardening up, but the most of it is just… shell.

And yet it also looks fibrous, and drippy, depending on the parts!

The other thing I of course obsessed over, was the life-finds-a-way quality of the plants.

I guess ultimately, the biggest thing about Pamukkale is just how big it is.

Sure, there are other travertines in the world. But not like this one.

You could walk along the edge of the white shell mountain for quite a distance if you wanted to, either following the rapidly-moving-and-very-warm waters on the edge…

…or wading through the wider (and sometimes quite cold) pools.

We did dip our feet a bit, at let the clay-like bits of squelch between our toes. But we were also wary of the time passing… the site of Pamukkale also has some pretty impressive roman ‘ruins’, as well as a warm bathing area you can actually swim in.

So, begrudgingly, we turned away from the white cliffs, and headed towards some other exciting sites.